Alright, it's been a while but we're officially back on track. Between moving, going on a vacation to Rome and Greece, and not having internet on on my computer, I'll be the first to admit that it's taken me some time to get things together here. To be perfectly honest I'm not even sure how far behind I am but these pictures were taken during the last week of October so let's start there.

Let's start with Brenda who completed her LSU Tiger De Lis Window. I have to say that her soldering was nothing short of perfection as not one touch up needed to be done on this. She was concerned since the final purple border wasn't a perfect match to the rest of the purple but the SLIGHT shift in contrast is something that I always try to achieve in my own work. Since the corner Fleur De Lis sections are purple which butt against the purple border, the subtle color variation prevented the colors from bleeding into one another. This separation makes the FDL corners stand out rather than just become one blob of purple. Sometimes we learn great things through our 'mistakes'. 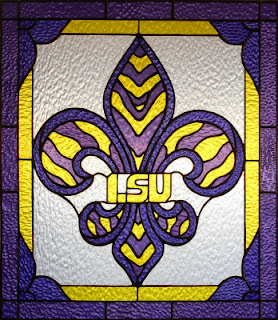 Linda L finished the first of her three Santa Windows and look how great this first one turned out. This is a another project that didn't need any touching up at all with the soldering. In fact, Linda cut and attached the borders while she was at home. Now that's what I call an accomplished student. 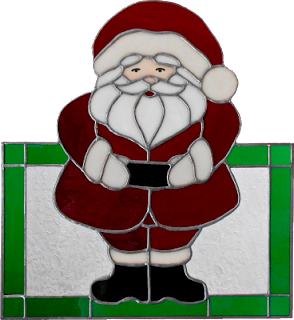 Paula's Hurricanes Window is officially finished. The two different whites work perfectly together (like the purples in Brenda's Window) but it's the lettering that really impressed me with this window. Paula is always ready to tackle a challenge whether it's small pieces of glass that have to fit together just right, or foiling someone else's window as she's waiting for her patina to 'dry'! This is another great job by Paula. 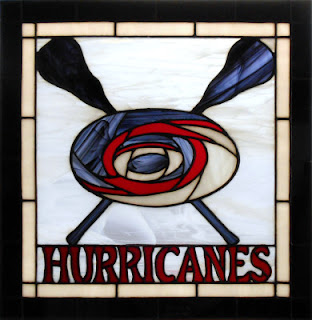 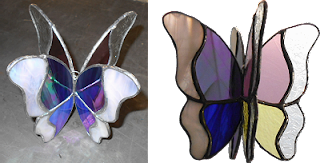 Carol made this FDL Window at home and brought it in for some brass channel, some hooks, and it's closeup for the blog. The soldering was perfect (as always) and Carol has yet another window under her belt. 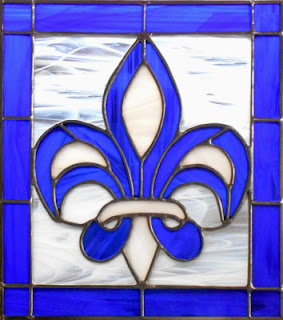 Terry wrapped up the work on her flowing Cross design and made short work of it at that. She used 5 bevels in the cross to make this sparkle when the light hits it. It's geometrically and symmetrically perfect but we're used to that from Terry, aren't we? 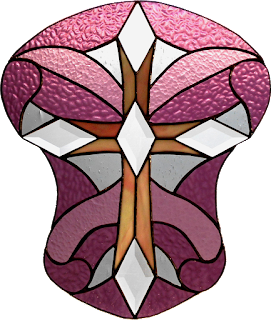 Betty has a first here as she made an old snowman pattern come back to life. It's been years since this Snowman has been made and Betty learned that to make it you actually assemble the snowman, the holly leaves, and the bow as four separate suncatchers. Once they are all completed (soldered, washed and waxed) they are soldered on top of the Snowman to make one final suncatcher. After that we paint on a face and call him Frosty! 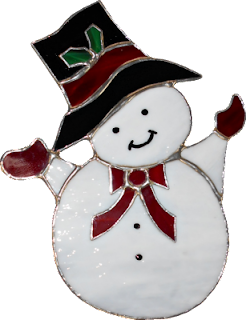 Betty also completed 4 more Angel nightlights bringing the grand total of Angels to 27 (or so.) That's a lot of wings and Halo's! And speaking of halo's, Betty twisted her own wire to make the halo's on these (final?) four Angels. It's a little tricky but in the end it's kind of fun to do. 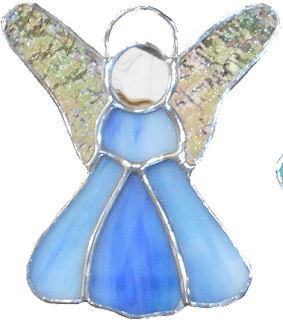 Janet completed another Butterfly and from start to finish she needed no help at all. Next week she wants to take home three stakes which makes me think that she has three more of these ready to be put together. She's wasting no time at all on these and doing a terrific job. 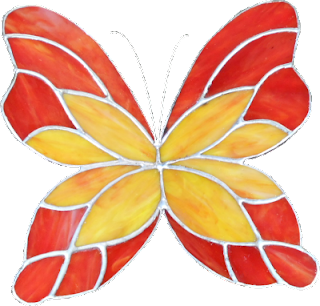 Vickie got all of the copper wire tinned with lead and then cut and spun them around a sharpie marker to make the antennae/hook for her ten completed butterflies. I'd show you all ten but I think that might be a little redundant especially since they all share the same color scheme. Vickie did a great job on these and is ready to tackle another project when she come back in to class. 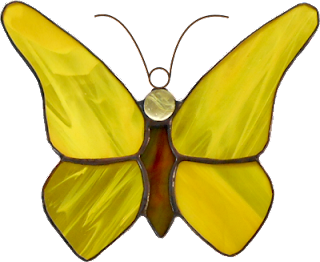 Ann has turned into a regular cutting machine. She has all of her Rosebud Window cut out and ready for the grinder. The pink/champagne class was a very tough glass to cut but Ann got it all out with glass to spare. Sometimes glass is just difficult to cut and this was definitely one of those times. And then, as if to add insult to injury, her background glass didn't want to cooperate either. But again, Ann persevered and put that glass into its place on her pattern. 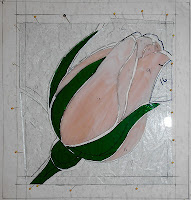 And Becky S is becoming a 3D rose expert because she has at least 3 more of these traced out and ready to be cut. Here's a look at some of the yellow glass that she chose to use. You can see that she has most of the the glass cut with only a few left to be separated.

Bonnie has all of her Rosebud With Stem window all cut out and it's got a wonderful flow to it. She requested that it 'pop' out of the background glass and into the border which is an effect I've always loved. I'm pretty sure that this will gain a background when you next see it.

Carol also completed another of her bevel inserts while in class and plans on bringing them all back (once they are all completed) so we can get better pictures of them and assemble them correctly for you to look at.

Charlie now has one Bird Of Paradise Window completely ground and is just about ready to start grinding the second mirror image match to this one. He's begun wrapping this one but if he wants to box this and resume grinding on the second window there would be nothing wrong with that. Come back next week and see what Charlie decides to do next.

Cindy started working on cutting out glass for her version of Brenda's Tiger Fleur De Lis Window and she's moving along nicely. She's gotten the trickiest cuts (the L, S, and U) out of the way first but there's still a lot of stripes to do. But things like that never scare Cindy away. 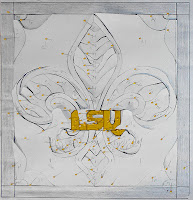 Jeannette began working on her Grapes, Wine and Cross Window and has really done an amazing amount of work on it in just one class. She's got the majority of it cut out AND she has it ground as well! I have to say that Jeannette has really hit her stride on this window because I can't imagine anyone moving any faster unless the quality of the work were sacrificed. 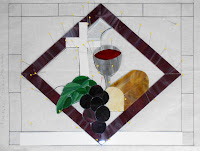 Linda F has just about all but the final touches completed on this beautiful Owl Suncatcher. With just the final edging to go I know that we'll see this completed when she comes back in the door. This owl is set to fly the coop.

Mary Grace has one Christmas Tree under her belt and a second one almost there. She spent most of her time grinding the tree and then on fitting the red globs into her pattern. Working one at a time she got them all fitted into place in a reasonable amount of time. Perfect fits are important here because without that we end up with a lot of lead around the beads. Mary Grace is really getting the hang of this now.

Natalie continued working on her Pelican Window and now that all of the glass is cut for the bird itself she's set to start grinding when she comes back in. Her colors look great and I think this widow will be spectacular when it's finished. 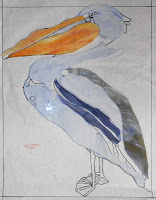 Rowena has two panels almost completely cut out for her series of five inserts. Her last series based on this pattern totaled six windows but this set that she's working on has one longer section across the top that we've redesigned for this window. Rowena wanted a Humming Bird and a flower in the top section but we needed it to line up with the original panels or the leaves wouldn't flow correctly. And as you can see from the pattern, we've succeeded wonderfully. 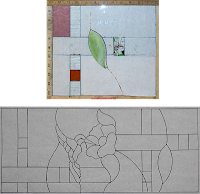 Shelley got the second side of her Aquatic Window completed and it's looking perfect. She has a few runs thru's on the front side that will need to be straightened out before she can color this and wash it but that will hopefully be handled during her next class. Hopefully this will be completed next week.

Sue resumed work on her large Candy Cane Suncatcher and started a second mirror image version as well. With one completely soldered and the second one ready to be wrapped I'd say that these two projects are just about behind her and ready to be hung. 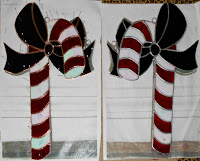 Our other (original) Susan worked on soldering her Tiger Window and made a conscious decision to apply less solder than she normally would and it paid off in spades. This window will be completed when she comes back in because all it really needs are a few more lead lines, a bath, and some patina to finish it off.

And speaking of tigers, Terry 's got her Tiger/Louisiana window pattern just about all worked out and will begin cutting glass on this project next week. Though it's hard to see, there's a lot of detail in that tiger face and you WILL see that once the glass is cut for it.

So that wraps up the month of October save for the two Weekend Workshops that we held. Those will be coming along shortly along with two other normal class posts which should bring us up to date. Mark my words when I tell you that you'll be hearing again from us sooner than ever!

Love the fleur de tiger with LSU in center. Do yall ever sell the creations that you post?