Well, it's been a VERY busy week with a Weekend Workshop happening between classes.  Because of that we're running a bit late her so we're going to get right into the projects that everyone is working on.

Cindy's Tiger Eye De Lis Window is a perfect example of the fine work that Cindy is capable of.  My soldering iron never touched this window save to put hooks on it for her.  Everything lines up perfectly, the colors are vibrant, and symmetrically speaking the Fleur De Lis is flawless.  Perfection all around. 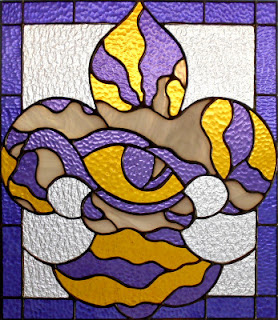 Ann completed her large Geometric Suncatcher which is a variation of the Horseshoe Cross without the bottom horseshoe portion.  Ann's work is faster and more exact than it's ever been and this is a perfect example of all of her experience at work.  The iridised glass she used around the outside edges looks great too. 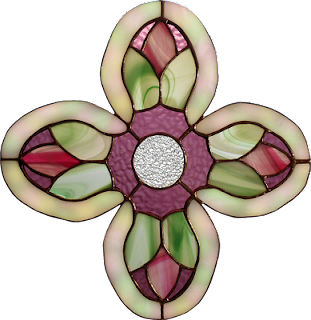 Bonnie finished her three Lily Nightlights by simply adding three stamen to each flower.  That was done by putting a solder glob on the end of three short thin wires and then tacking them into place.  She then attached them to the nightlight clips and washed them.  Here they are all lit up and looking SPECTACULAR! 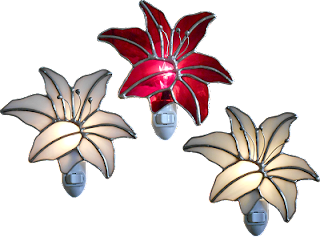 Gale and her Grand Daughter finished the large Butterfly Suncatcher that they had started last week.  Gale brought it back in because she found that it wasn't nearly as sturdy as she had hoped.  This was due to the straight horizontal and vertical lines running through the middle of the butterfly body.  As a Lawn Ornament it would have been held sturdy by the zinc channel we mount it on but as a suncatcher we needed to bury two wires into the solder on the back side.  The end result was a solid butterfly that will never fall apart.  We'll discuss the problems with straight lines in stained glass in out beginning tip section next week. 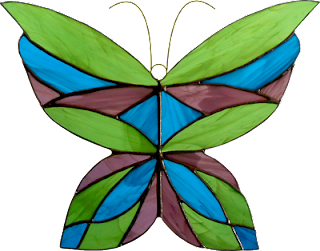 Rowena finished her round Fleur De Lis Window at home and brought it in with only the edge needed to be beaded.  I looked it over and was amazed at how wonderfully Rowena did in getting a pattern made that was perfectly round.  We discussed how to use a small compass to get a finished pattern a little more quickly in the future but Rowena did a great job by measuring 3/4's of an inch all around her window.  Once that was done she just connected all the dots to make her circle even all around.  Brilliant. 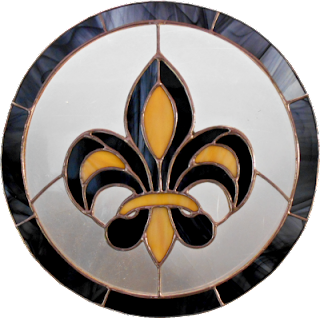 Becky S made this beautiful 3D Rose this week and did it entirely on her own.  She worries about the angle of the petals far too much because this is nothing short of perfection.  No two 3D Roses will ever come out the same so variations are to be expected.  That said, I'd easily use this as an example of how to properly build a 3D Rose! 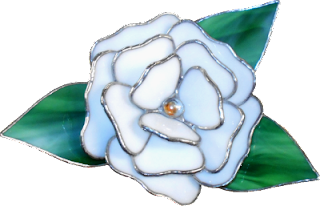 Terry managed to completed her latest Tiger Face Fleur De Lis suncatcher and went with a completely different color scheme on this one.  I think that the brown opalescent glass gives this tiger a more ferocious look. 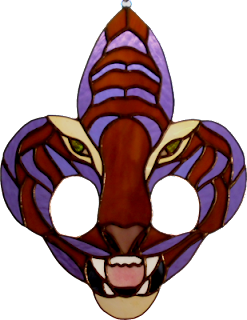 Bonnie not only completed her nightlights but she got some serious work done on the start of her newest project, a Blooming Rosebud Window.  Production really moves along when you're the only person in class!  That said, we hope Betty had a great time while she was in England.

Cindy is putting together a 3D butterfly of her own this week and it's what we like to call a spinner.  this will have 4 sides and hang from the center like an ornament.  If that sounds confusing just come back next week when I'm sure you'll be able to see this completed. 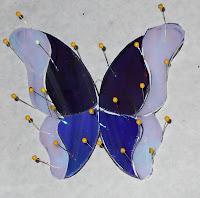 Linda L made some excellent progress on her 3 Santa's.  One even has the background and border all cut and ground.  She's taken these home to resume working on them there and I wouldn't be surprised to see three Santa's ready for solder when she comes back in.  This is some great work on Linda's part.

Martha decided to grind her seafood window this week which really surprised me because I discovered that one of her crabs wasn't ground last week.  Her cutting was so perfect that I would have sworn she had it ground.  This week I know for a fact that every piece of glass has touched the grinding wheel so she'll be cutting again when she returns in two weeks.  Enjoy Florida, Martha (and don't let Becky B. get you into too much trouble!)

Mary Grace resumed work on her Large Christmas Tree and it's just about ready for hanging.  With only the edge left to be soldered Mary Grace will easily have this finished when she returns.  She says she hopes to have a second one cut by next week so although her work on this one is about to end, her work on Christmas Trees is just beginning. 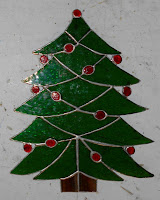 Janet made a minor repair to her 3D Rose from last week and got two more assembled during class.  Then she went ahead and got a butterfly completed as well.  She didn't get a chance to clean them during class so this picture is the best I can do.  Talk about a busy night for Janet!

And since we're running late getting this out I was able to lift this picture of Janet's completed Roses and Butterfly from Facebook.  Sometimes being late actually works out to my benefit! 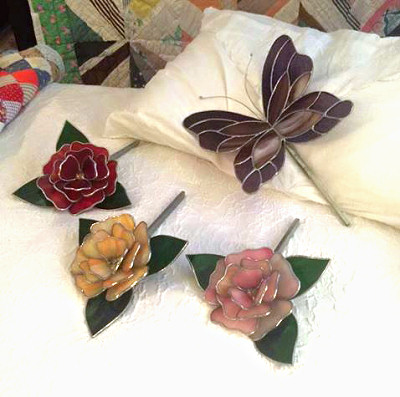 Myrt is all ready to solder her Cross De Lis because this week she managed to cut, grind and wrap her final pieces of glass.  Everything is fitting together perfectly, everything is square, and life is great because Myrt's soldering is excellent. 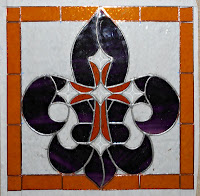 Sue worked on this large Candy Cane suncatcher and got it all cut out and ground while she was in class this week.  She's got a lot of it wrapped already s I'm expecting this to be completed when she comes back in.

Paula has her Hurricanes Logo Window all ready for solder.  Just look at those letters that she assembled while she was at home.  Amazing!  I'm guessing that it was a labor of love.  She's got her double border cut and once those pieces are attached she'll begin soldering this. 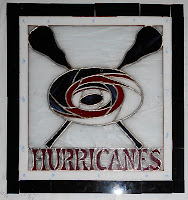 Shelley has flipped her window over so the back side is now on top and already has most of the second side of this window soldered.  Look to see this window completed in two more weeks.  It's a big one and although she might get it soldered next week the cleaning and coloring will certainly take a lot of time.

Terry also worked on this beveled cross window that she drew up.  She's cutting glass now and there aren't that many pieces, so I'm expecting this go quickly for her. 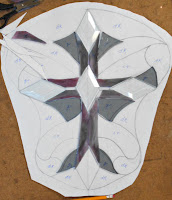 Susan got her border ground and wrapped and tacked into place this week which allowed us to get a zinc channel cut for it.  Once the channel was added this long thin window gained a lot more stability.  There's still one last piece of glass left to cut and that's just the eye of the tiger.  But just when you think this is over with it isn't because Susan will be making two more of these in the future each having small 'adjustments' to the pattern or color scheme.

Vickie  really made great progress this week with her 10 yellow Butterflies.  She's ready to add antennae to these beasts and then these will be ready to be washed and colored.  In other words, consider these to be finished!

Brenda got the final border cut for her own version of a Fleur De Lis Tiger Window and just look at all that precision cutting.  I can't wait to see this one lit up from behind because the contrasting colors already look great. She was very worried that the border doesn't match the rest of the purple perfectly but I honestly wouldn't want a perfect match especially with the purple corner accents touching the final purple border.  When this is lit up she'll understand why this turned out to be a good thing. 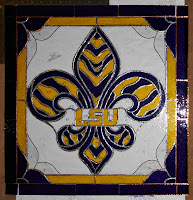 Carol has a second panel of her 6 paned door window finished but she took it home to color and wax.  It's almost identical to the last window save for the fact that the  border is on the opposite side.  Here's a look at what the entire completed door will look like.

Sue managed to sneak her latest Pumpkin Lawn Ornament out to the car before I got to take a picture of it.  It was a busy class but this picture from last week should refresh your memory of what it looked like.  The one she completed this week was a little larger than the one pictured below but scale is hard to judge in a picture anyway. 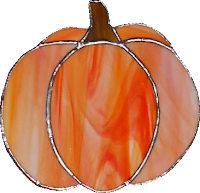 Rowena is also re-visiting an old friend this week-- she's pulled out her 6 paned flowing leaves pattern and is making another set for another frame.  The design will be the same but the color scheme will be a little different this time around.  I didn't get a picture this week but we'll fix that  next week for sure!

Okay, we'll return this weekend with an update about what happened during our weekend workshop which features no repeated design.  That's right, four students with four different windows all completed in just two short days.  Wait until you see the results!