Sometimes when cutting glass you have to look at things in a different light to find ways to make your cutting easier.   Take, for example, a small square that has a circle in the center.  Altogether it's  5 pieces of glass and getting small pieces like that to fit back into a perfect square isn't easy unless you know the secret.  That secret is to make the square as one piece of glass and then trace the completed circle(cut, ground and wrapped) onto it.

Here's what we're trying to achieve:

And here's the easy way to do it:
1) cut a square to the finished size the above piece will be.
2) draw a line horizontally and another vertically across the centers.
3) center the ground and wrapped circle on top of the square and trace around it
4) make your 2 straight cuts and then break the square into four pieces
5) cut point to point across the curve (it's an side curve so we ALWAYS make a cut straight across it first)
6) repeat the point to point cut on the remaining three sides being careful to NOT mix up their placement.
7) cut the rounded section out
8) cut the remaining curves out being careful NOT to mix up their placement.
9) grind the four corners and when it all fits back together with the circle in the middle you will have a circle in a perfect square. Remember to leave a little wiggle room for your foil so the square doesn't get thrown out of shape when you wrap it. You can simply skim the straight lines, it's the circular section that will need the most grinding. 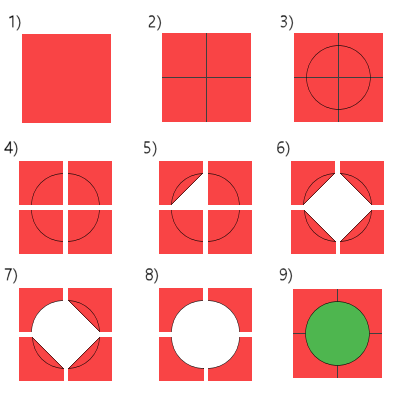 The above method is a much easier than cutting out pattern pieces for 5 small pieces of glass and trying to get them to fit perfectly.  You'll see how Sue did this for the corner of her Santa Face Window a little further on down.


So first off in our completed windows we take a look at Ann's Rosebud Window.  Her choice of colors truly made this all her own.  Look again and you'll see that that Ann has only used two colors in this entire window.  The idea of using the center most color (the pink/champagne glass) for her final border ties everything together beautifully.  Well done! 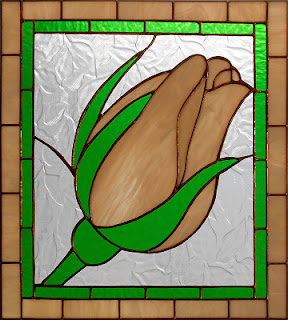 The longest section of Rowena's five inserts is officially complete now and it's a beautiful design.  I never would have thought to combine a hummingbird and flower with an abstract design but Rowena did and that's how this beautiful window came to be.  I love it!

Linda F's Ship In A Bottle really impressed me.  The design is beautiful and Linda's execution of it is flawless.  Cutting the bottle around the ship rather than overlaying it on top was, by far, the best way to go with this pattern.  You lose the 3D effect but gain stability and cleanliness since no chemicals or dirt will get caught between the clear and the opaque glasses.  It's also a much sturdier piece when done this way.

Sue's Santa Face is complete and Santa turned out beautifully.  The green and red border that Sue picked really makes this window say, "Merry Christmas!"  Note the four corners and how nicely they fit together.  This was achieved using the method discussed in the beginning of this post. 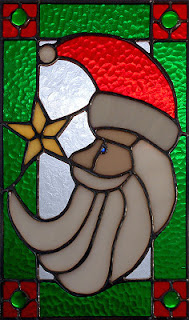 Betty has another Snowman under her belt and really has the hang of this suncatcher now.  I showed her how to attach the bow and the holly leaves and now she's coming in with completed snowmen. 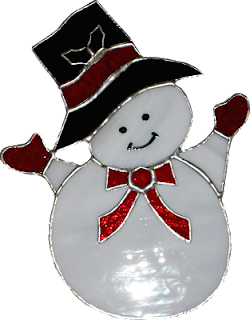 Charlie's knocking out hand mirrors at a rate of one per week.  I think it's safe to say that he's going to get all 5 (or is it 6?) of the mirrors he needs done in time for Christmas. 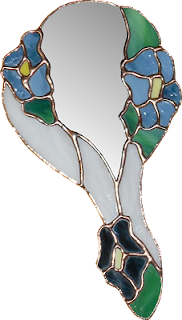 Brenda fell in love with the Candy Canes and Bow that Sue made a few weeks back and asked me if I had the pattern (which I didn't).  That's when Terry came to the rescue and drew up her own version of a candy cane and bow.  Although the subject matter is the same the execution is completely different.  I'll be the first to say that Terry's pattern is amazingly well designed.  Here's a look at the first one that Brenda is making almost completed.

Carol has all of the final border cut ground and wrapped for her large Beveled Window.  She has two of the sides attached and when she gets home she'll add the remaining two sides and then start soldering.  She used the same glass that she used to frame out the bevel for her final border and it works wonderfully that way.  A great choice for sure.

Carol also has two more crosses started, or perhaps I should say that she has two very near completion.   All they need now are some hooks to hang them by and then a good bath.  Everyone is making copies of this pattern so expect to see a few more of these throughout the next few weeks.

Betty brought this in thinking that she might re-cut some of the pieces of blue and change them out for another color but Bonnie and I thought it looked great the way it was so Betty ground what she had and then began wrapping her pieces.  You can't lose with green and blue! 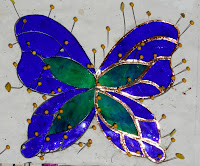 Cindy's working on her Tiger De Lis Window but she'll be 'pulling a Martha' soon by pushing this project aside so she can begin work on a large Harley-Davidson Motorcycle Logo Window.  Just wait until you see the pieces in that! 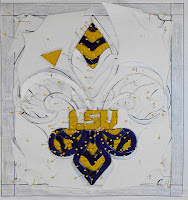 Janet's got her Cross of Many Colors Window all ground and wrapped which means that she'll be soldering this when she comes back in.  Ann loved how Janet expanding the Cross out into a full fledged window and may end up on working on one of her own.  Meanwhile, Janet is making huge progress on this window which had been pushed aside for a few months.  Everything gets done in it's own time and it's nice to see this window get its share of the spotlight.. 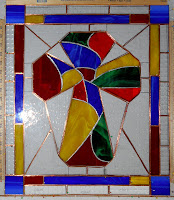 Linda L's three  Mardi Gras Masks have all got their backgrounds cut out. Now she's in the midst of soldering these panels and before you know it she'll be moving along to her next project.

Bonnie has started making two candle holders with reversed sides which will give them a nice effect.  As I said, she's making two of these but I only have a picture of the green one.  Next week we'll see the one she did in red as well.

Mary Grace gets two HUGE thumbs up and an A+ for her work with her pistol grip cutter.  When she said that she wanted to make a window with nothing but straight cuts I told her that hadto use the pistol grip cutter that she bought ages ago to make it.  She was a little leery about it but she caught onto cutting with it almost instantly and look what she's accomplished in just one class.  And did I mention that she did all of this WITHOUT a pattern!   Impressive. 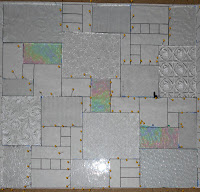 Myrt got new curtains for her Cat in a Window Window and don't they look great.  It's one of my favorite waterglass colors and I have to say that I was right-- it does make nice curtains.   As you can see Myrt is moving along nicely on her Pussy Cat Window and there's not all that much left to go on it. 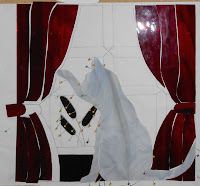 Rowena started making one of her own crosses and she decided to make it using  a rich brown Baroque Glass.  We've had this sheet for a quite a while now and I like to think that the glass sat in the rack all this time just waiting to be turned into this cross.  I wonder if this may just become a popular glass now... 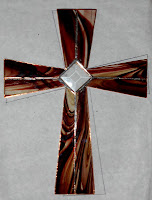 Shelley now has all of her Duck Panel tacked together save for the border.  The border is already cut however,  and will be attached next week when she returns.  This is a great window but the thin pieces can drive a less experienced glass crafter crazy!  I love the iridised background that she picked. 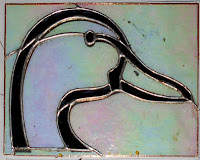 Natalie's Pelican is cut and mostly ground.  We had a few issues with some of the incredibly thin pieces that now need to be re-cut but we've tacked together what already fits to make re-cutting the thin pieces that much easier.  By tracing out the opened area on a piece of glass we should get a perfect fit on the first cut. 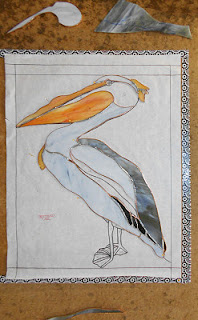 Paula did a repair of her own this week involving a familiar pokémon that she made shortly after she started classes with us.  By the time class ended she had her Mudkip completely repaired.  Mudkip, alas, is hiding in his picture here.

Susan has all of her LSU Tiger ground and ready to be wrapped.  The background will go quickly on this window once the sheet of glass gets delivered.  I believe Susan said that this will only get a single border which means that it will be completed even faster yet!

This week we saw Terry complete the repair work on her 'V' for Vendetta Window.  She changed the size of it ever so slightly so we could use the unbroken border pieces without fear of them coming up short.  By changing the height of the window by 1/8 of an inch we we sure that with a simple trim everything would fit back together without any gaps.  Terry also started on her own variation of a Bow and Holly Leaves suncatcher.  Terry recognized the original pattern's weaknesses and redrew it to be a much more solidly constructed suncatcher.  Great job!

Sue has begun to cut out a trio of Cardinal Lawn Ornaments.  She found the pattern on the internet, printed it out to the size she wanted it to be and she's a cuttin'!  I know the picture below looks like it was taken outside but that's only because Sue is placing her glass on top of a picture she found on the internet! 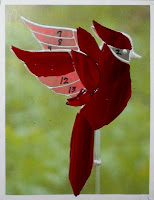 And lastly we have another one of Charlies 6 (or 7?) hand mirrors that's in the process of being ground.  Look to see this one completed next week and then Charlie will start his final two.

Well, we're getting close to being caught up on our weekly classes but I still have 2 Weekend Workshops to post after that.  It's certainly been a busy end of year here!