Our tip this week is simple yet so very important.  When making stained glass windows you should never rush ahead and solder the back side until all of the glass is attached to the window.  Why?  Because once solder is applied to the back side it raises the window up almost an eighth of an inch higher when you flip its front side back upright.  If you try to attach more pieces they will be considerably lower than the rest of the window and cause instability.

In this first side view picture you can see how two pieces of glass line up even though there is solder on the top of the project.

In this next picture there is solder on the front and back side of the window making the two pieces of glass rest on the table at different heights.  This is very problematic and MUST be avoided.

The solution is very simple and very important.  Never solder the back side of your window until all of the glass is cut, ground and attached.

OK then, let's see what we have finished this time around.  Bonnie's variation of the Rose Bud Window is officially completed this week and she's more than happy with it.  Bonnie is a sucker for a Blue Hammered Glass as a border and I have to admit that when it works this well it's hard to stray away from it.  This is another great job by Bonnie!

Jeannette completed her Cross, Grapes, Wine and Bread window and now that it's off the table and has some light behind it you can easily see the different purples she used for the borders.  Most of the time when borders intersect you'll see the same color used for both borders but in this case I think this worked out much better.  Jeannette has been making some excellent choices with color lately and you'll see that happen again for her a little further on down in this post. 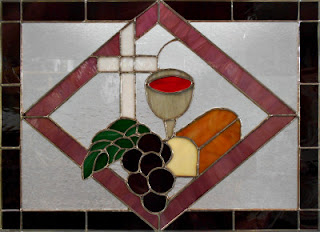 Gale finished her Owl Window and it turned out perfectly (as to be expected).  She changed the eyes to globs and the end result is wonderful.  Sometimes it's the simple things that makes a window look so great, but beyond that there's always the quality of the work which Gale has no problem with. 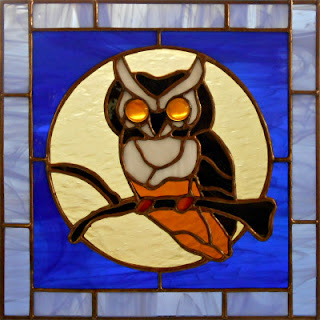 Paula's Dragonfly Suncatcher is another example of her ability to easily work with tiny pieces of glass.  This design is very easy to mess up if you don't pay attention to symmetry but Paula knows how to follow a pattern and this is one perfect Dragonfly. 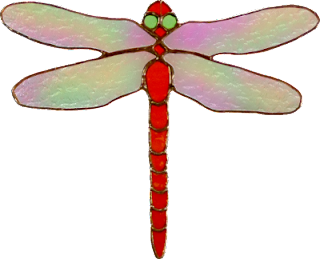 Myrt finished her Cross De Lis Window and it's as flawless as can be.  Myrt has really got every skill down when it comes to making stained glass.  This window just proves my point. 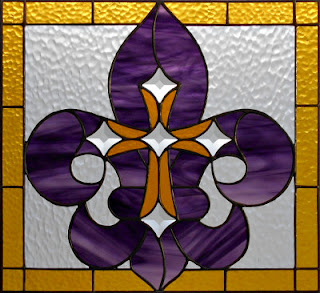 And here's Vickie's interpretation of a Fleur De Lis Window.  She went with very traditional glass colors and used the darkest section of the glass for the bar near the center of her Fleur De Lis.  It's a way of adding more color without actually bringing in a complete change of color which can be very distracting.  It's very subtle yet effective choice. 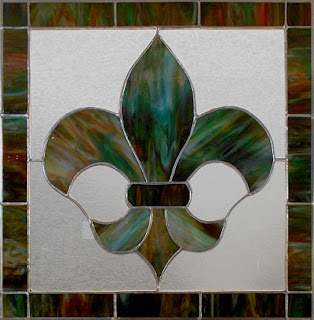 Betty put the finishing touches on her LSU/Tiger Claw window AND her pair of snowmen.  She says she's done with the Tiger Claw version of the LSU Window but that she loves making the snowmen.  That means that we'll be seeing more of these Frosty guys before Christmas gets here. 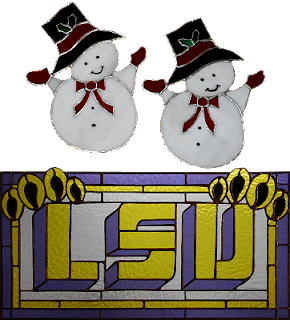 Janet's latest Butterfly and Sunflower Lawn Ornaments are also finished and she's knocking them out so fast that we're going to start calling her a Lawn Ornament Machine!  This is yet another example of the great work that Janet does.

Martha has put her Seafood Window on hold for a little while as she starts working on this beautiful pair of Duck Windows.  Whoever drew up this pattern is amazing, let me tell you.  It incorporated everything that Martha could ever want in a Duck window-- a duck, a dragonfly, a cat tail, water and a sky.  There's even extra detail without it having that overdone look.  And the work that Martha's done on these is pretty amazing too because she's already begun grinding them!

Now, Ann's Rose Bud Window is nearing completion and just needs to be soldered now.  With the last of her border attached and the brass channel firmly in place Ann got the front of this window soldered and then began the second side.  With more than half of the back started I'm sure we'll see this window finished in our next update. 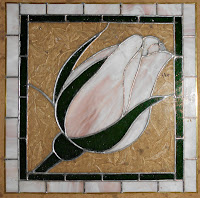 Myrt's started working on this Pussy Cat in a Window Window (get it?).  With her cat all cut out and ground she hopes to be working on the red curtains when she returns next week.  And the glass that she has picked out is one of my favorite reds available which I think will look great. 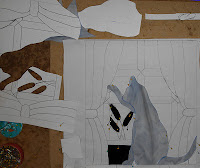 Carol got the background attached on her large Bevel Window and then added a thin border of Fractures and Streamers Glass.   This is the glass that she originally wanted to use as her background but because we didn't have enough of it in the shop she decided to use it as an accent color instead.  There's one more border left to go on this window but I'll say it here and now-- this was the better way to use the Fractures and Streamers glass because using it as the entire background would have made this too busy.

Jeannette was cutting out two different colored Crosses this week when someone mentioned that she could mix them together since the colors complimented each other so perfectly.  Both crosses were cut from the same pattern so she just swapped out every other piece and low and look at what she ended up with!   Everyone thoroughly agreed that this was the way to go and the smile on her face when she saw how they looked told me instantly that she liked this variation.   Jeannette only needs to solder these and then we'll see them hanging in the light. 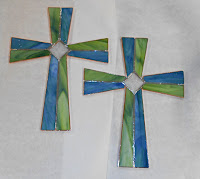 Terry got more work done on her Tiger Window but had to put it aside while she worked on repairing the 'V' Window that she had made a few weeks back.  At first it looked like it was just two pieces but in the end there were so many border pieces broken that it was easier to pull the entire border off and then work from there.   Accidents happen but luckily we can repair those accidents.

Rowena has everything ground and tacked together in her long Abstract/Humming Bird Panel.  This is the top section of a five panel window and they all join together to form one big scene.  We'll see that finished scene soon enough.  All Rowena has left to do on this is to solder it and then wash it and install it.

Linda L is making incredible progress with her three Mardi Gras Windows and this American Flag Lawn Ornament that she cut, ground, wrapped and tacked while she was home.  But while she was in class she cut and attached the borders for her three masks which she now has to fill in with her background pieces.  This is backwards from how we normally do things but in this instance it's a much better way to handle the situation.  All of those background pieces are very similar and cutting them from a pattern would be tougher than simply filling in the holes she left in her window when she attached her borders.  This method ensures a perfectly straight line on all of her edges.  Sometimes you just have to think outside the box.

Cindy completed one of her small Poinsettia flowers and has a second one nearing completion.  She's going to wash and color these at home and hopefully they'll sell at the show that she's doing next week (along with plenty of other things that she's made).

And Sue has made great progress with her Santa Face Window.  She made short work of her corners and we'll explain how she did those fancy corners so easily when we return in out next update.  We'll also see this completed then as well!

And Susan's second LSU/Tiger Window is moving along quickly as she has the majority of it ground now.  There are a few piece here and there left to grind but Susan's got this one fitting beautifully in record time.  The second times the charm, that's for sure!

Shelley's Duck Head Window is almost completely ground and almost ready to be wrapped-- there's just three pieces left to go (which are already cut out).  Once they're all  tacked together it will just need a border and a little solder to wrap this all up.  Look to see this completed shortly. 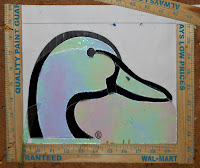 Lastly we have Brenda's latest Tiger De Lis Window is nearing completion now.  Knowing Brenda it won't be long before this window is ready to hang.  She's not one to mess around! 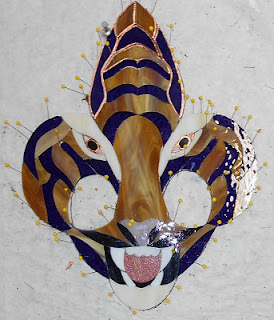 We have another post ready to go so expect one in two more days.  I hope to have all of our weekly classes caught up by Christmas!


Posted by Bayou Salé GlassWorks at 10:38 AM