There's been a little excitement in the shop over the Fleur De Lis Window that I made.  It seems that people were very confused by the large strips of metal running all throughout the window which is a simple variation of the lead border that I had used in the peacock windows that I've made in the past.

A lead border is simply a border that's been cut from glass but then completely covered over with lead.  The arrows in the picture below point to the sections of a lead border. 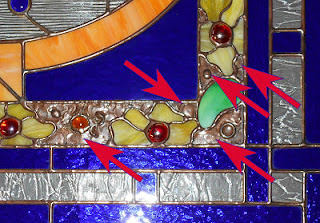 Remember, it's all glass.  Once the glass is cut and fits into place you cover both the front and back sides using a sheet of copper foil and then wrap it as you would a regular piece of glass (in that order!)  When soldering you simply coat all of the foil with lead and then finish it by soldering the edges as you normally would.  Here's a closeup of the Fleur De Lis I've recently completed. 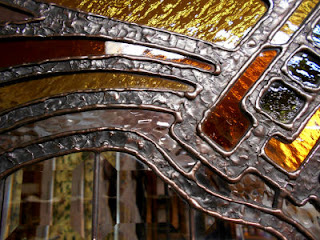 You can achieve long impossible cuts using this technique because even though the glass may be cut in smaller pieces under the lead you cant see that (because you never actually see the glass itself).  This explains the seemingly impossible unbroken circles of lead in the upper left of this Fleur De Lis window. 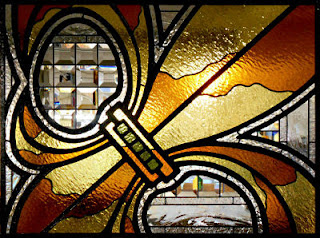 It's actually a simple effect and Becky S will be using in in at least one window that she's begun cutting out this week.

Okay, so lets see what our students have accomplished starting with Martha's pair of Duck Windows.  I must say that her work has easily become some of the best we see in our classes.  Martha doesn't have a single weak spot in her repertoire of stained glass skills.  She's still a little unsure of her talents but she has nothing to worry about because her work during the past year or so has been incredible. 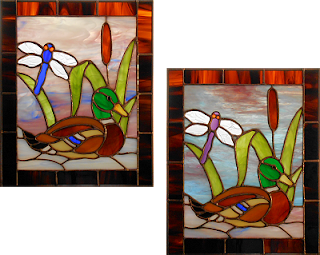 Brenda's Eating Disorder Awareness Window was completed this week and she also did a spectacular job all around.  The curves flow beautifully and the colors worked out wonderfully even if she was running out of black glass! Her soldering is top notch and she's able to solder at top speed since she completely understands when you can speed up and even more importantly, when to slow down.  And that's why this window was completed this week. 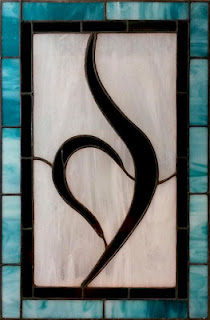 Betty has made a second window using her Clear Textured Fleur De Lis pattern.  This time she's used a wispy white background glass giving this window a new feel once again.  She has a third one in the works and I'm sure we'll see that one finished shortly. 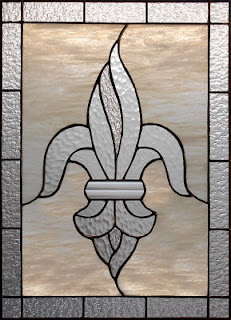 Take a look at our first Rabbit Project of the week, Mary Grace's Bunny Lawn Ornament.  She's been working a lot at home lately (now that she has an official glass workshop) and she's gaining more and more skills with all of that extra practice.  Her Rabbit looks great and she's even finished it in time for Easter. 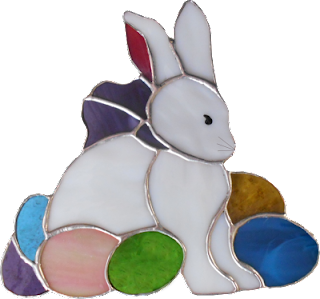 Susan's second LSU Tiger has been officially completed and is now ready for hanging.  The colors have changed from the first time she made this but that won't be the only thing that changes when she starts her third and final version of this window.   As always, this is great work from Susan! 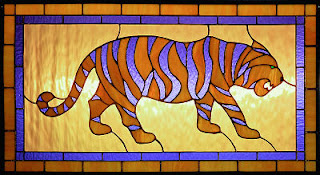 This is Rowena's (really!) first hand mirror and she did more than a great job on it.  When she came in she had a few pieces left to cut out but by the time class was over (just 3 hours later) she had a completed hand mirror.  What a beautiful job. 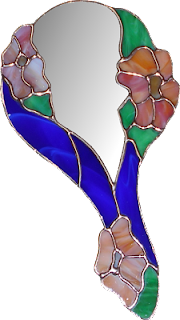 This is Linda F's Butterfly Lawn Ornament in a way you've never seen one of these butterflies before:  From the underside.   From this angle you can see the stake that will be used to anchor this to the post that Linda will drive into the ground to support it. 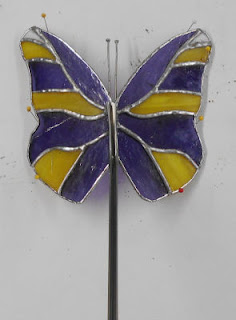 Becky S has begun cutting out her Spiral Window and she's decided to use leaded sections (the same as a leaded border for some of her background pieces.  We won't see that happen until the window is wrapped but since she's got the majority of this cut out I won't be surprised to see this foiled in the not too distant future. 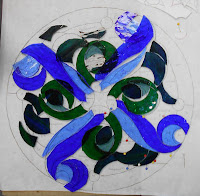 Betty is working on a Jester of her own and by the time she left class she had it not only cut out but ground as well.  The face has been cut from the same glass that she used in her Fleur De Lis background so although you can't see it in the picture this is all cut, ground and ready to be wrapped. 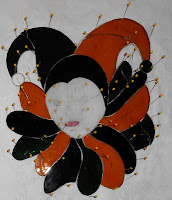 Ann's Cross Transom Window has begun taking shape this week.  She's working from the inside out (as I always like to do when a window has multiple sections).  All of the cross has been cut so the center section will come together pretty quickly.  And the cross itself contains the hardest cuts in this window so Ann already has this window well under control at this point.

Carol really made progress on her Cross De Lis Window.  She began wrapping it in class and when she comes back in I have no doubt that she'll get her background cut and her border ready to be attached.  Great color and great work make this window a winner. 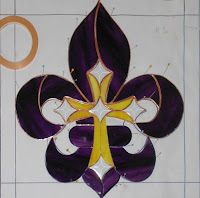 This one came out of nowhere to me.  When Paula walked in the door with the flowers, butterflies and most of the background tacked together I was amazed at how much she achieved while at home.  She really wanted to get both borders cut during class but doubted that it would happen.  Me, I had no doubts at all and look at what she walked out the door with--- everything is cut and ready to be ground.  More on this when Paula returns. 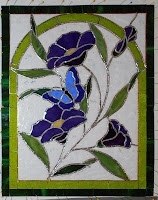 Charlie came in and tacked the first of his pair of Bird Of Paradise Windows together.  Once that was done he cut out his first thin border and had all but one side of it wrapped.  When he comes back in he'll tack this together and then work on his final border.  Charlie will be soldering this before you know it. 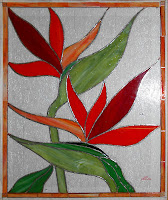 Janet's Lamp is now officially ground and she's begun wrapping all six sections.  With at least three panels done it won't be long until she solders these and then joins them together.  Her attention do detail on this is superb and I know this is going to look great when it's complete.

Linda F began working on this Rabbit Window while she was at home and when she brought it in this week the Rabbit itself was all cut and ground.  When class started she began wrapping it and then when that chore was finished she tacked it together and got the grass and the sky cut out.  Then before she left she had all but two pieces foiled.  I've no doubt that his will be completed when she comes back in and once it's all soldered and cleaned up we'll paint a face on this Rabbit and he'll also be ready in time for Easter. 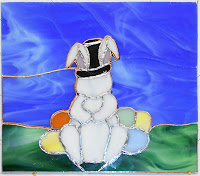 Jeannette's Peacock is really filling in now.  There are just a few scant pieces left to go in its tail feathers and then she'll really be showing progress (not that she isn't already.)  Her work is wonderful and I have no doubt that this will be one of our stand out pieces when it's complete. 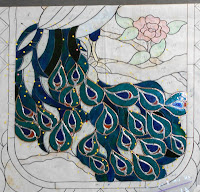 Linda L's Air Force Window is all ready for its background.  She got a lot completed on it this week and her work is without flaw.  This is a window that relies on straight lines to achieve it's effect and Linda nailed it.  She's also decided to completely surround this one with background but she's going to let the emblem cut into the border on all four sides to make it stand out from the background.  We'll see how that looks when she comes back in. 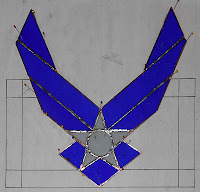 Bonnie has all the glass cut for her Study In Straight Lines Window and she also got a good third of it ground already. With the entire bottom section fitting together nicely and she's taken the pieces home so she can have them wrapped when she comes back in. 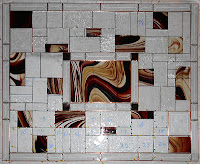 Becky's Horseshoe Cross hit a slight snag but the soldering she did on the front side helped make up for lost time.  When she wanted to change the pattern and add a bevel to the center of her cross I didn't double check to make sure that it was centered and, as luck would have it, it wasn't.  But we fixed that when she came in this week so now it's just waiting for some solder on its backside before she takes it home for good when she returns. 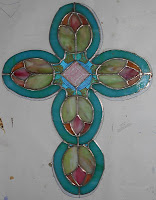 Shelley got her Fleur De Lis completely ground and wrapped while she was in class this week.  Then she got her background glass cut out as well.  She's taken this home in the hopes of grinding it there which means that we might very well see a border added to this when she comes back in in. 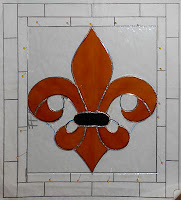 Vickie's pair of Fleur De Lis Windows are so near complete that I can already see them hanging up in the sunlight.  I've said it before but I have to say it again, her soldering is up there with the very best of our longtime students.

Terry's Spiral Flower Window is really taking shape as she adds colors into the mix.  It's hard to see all of the clear glass that she has cut out already but there's a lot cut out in this window already.  She's also taken glass home so she can work on this over the weekend.  I have no clue what we'll see when she comes back in but I do know that it will be great. 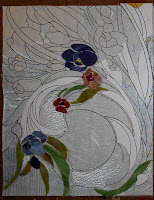 Here's a look at Mary Grace's latest project, a 3D Candle Holder.   What she didn't realize is that she would have to grind this so that it fits in a jig (the same way that Janet's lamp is being ground).  It sounds like extra work but there's really nothing to it.  Whenever you make something 3D your angles must be perfect for everything to fit together.  In this case those angles are 90 degrees.

We've reached the very end and we'll wrap things up with a look at Sue's latest window.  She found the pattern on the internet, printed it out in the size she wanted and has begun cutting and grinding her glass.  The letters are all cut out and before she left she started working on the white snow that lies on the branches.

That's it for this week. Come back and see us all again!