I Can't Wait For The Peacock To Be Finished

Let's start off with a great tip that I use all the time.  Grinders will spin either clockwise or counter clockwise.  My grinders have only ever spun counterclockwise but there's a chance  that other manufacturer's grinders don't.  In the pictures below I'm showing a wheel that is spinning counter clockwise.

The water you add to your grinder acts as a coolant and is picked up and thrown in the direction that the head is spinning. The grinding head on my grinders throws water to the right as shown by the red arrow in the picture. 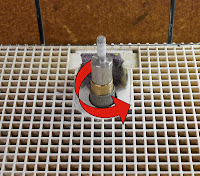 If you have a lot of grinding to do and there is a lot of marker on your glass you'll want to position the piece on the grinding wheel where the water won't spray onto your line, thereby washing it off before you get to it.  In the picture below you can see that the water spray will follow the arrow and begin to wash away your line before it even touches the grinding head!  This isn't good at all. 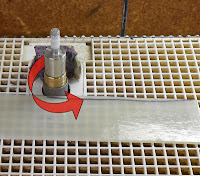 By positioning the same piece of glass with the line to the left of the grinding wheel the water won't spray onto your glass until you've already ground the piece.  Proper glass placement on the grinder can stop you from having to re-mark your glass over and over again. 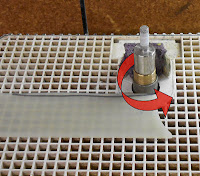 Also, as a side note I feel the need to state that you should never grind your glass in a back and forth motion unless you are smoothing out a piece.  (There are exceptions to this rule but those conditions are very rare.) If you have a considerable amount of glass to grind you should keep the glass on the wheel until the line is gone before sliding the piece along.  Also, if most of your pieces have line visible you need to slow down while cutting and focus on cutting off that line!


Well now, let's look at what what our students have accomplished this week starting with Becky's Spiral Window.  Tell me that this doesn't look absolutely amazing.  The tiny twisting pieces weren't easy to work with but Becky is very much like myself when it comes to enjoying a challenge.  I always say that you get back tenfold what you put into a window and this project just proves my point.   Becky used pieces of clear glass wrapped completely in foil to achieve the solid lead look (you can see it better in the next picture) and she really had a good time soldering those pieces in a purposefully unpolished manner.  And the icing on the cake was when she got to rough coat the thick zinc channel that surrounds the window as well. 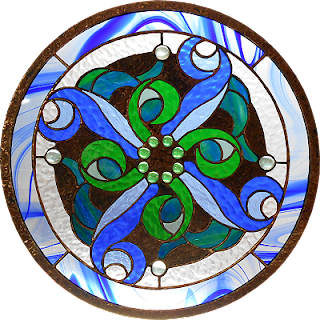 Here's a detailed view of the background pieces in Becky S's window.  That's not glass, it's lead!  And what an interesting effect it is. 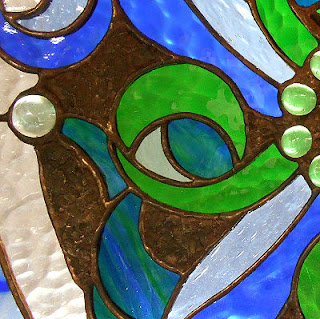 Brenda's JP Window is a wrap  and she's got herself a beautiful looking window.  Text is a funny thing when done in glass because if it isn't cut and ground perfectly then you end up with a window that looks like it was done with bad penmanship.  As you can see, Brenda's penmanship is wonderful. 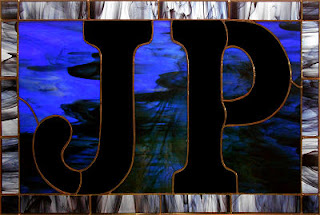 Judy came in with four Butterfly Lawn Ornaments all cut, ground and wrapped.   While she was in class she got this one soldered and tacked together.  You can't see it in this picture but the wings are soldered together at an angle and now that Judy knows how this is done she'll be able to move along more quickly when it comes to completing her remaining three butterflies. 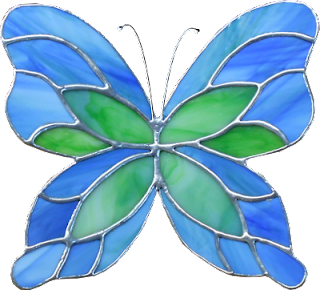 Myrt's Cross De Lis was another finished window this week and as always she's done a fantastic job on this.  Her cutting, grinding and soldering are all top notch which easily shows in this picture.  And for the record, I didn't do any touch-ups  on the soldering for her. 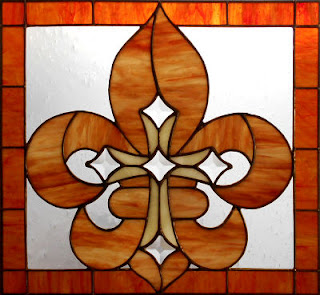 Carol put together the last of her Fleur De Lis Door inserts and then she got the border cut for three other sides on the FDL that she decided not to use for this project.  She had to trim off a little from one side of the window to get everything centered, but she discovered that was easy. 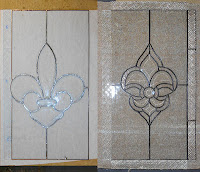 Gale's Magnolia Window has it's front side all soldered and she turned it over to start soldering the back side before class was over.  She only has a few lead lines left to go on this and then it will be completed.  Gale has found that soldering is like riding a bike-- it's something that you never forget how to do.

Paula's New Orleans Scene is looking incredible.  This has always been a favorite of mine and all of the students tend to agree.  Paula decided to ignore the number of thin, small pieces in this window and just hunker down and do it.  And she's making beautiful headway. 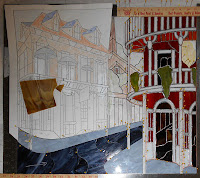 Up next is another large scale window that's being made by Jeannette.  Everything in the picture you see below is tacked together.  That's right, Jeannette will begin attaching her final border to this when she comes back in.  She isn't going to be adding all of the half circles that were drawn on the original pattern but she's adding more bevels so there's no way that this looks anything other than amazing when it's completed.  She's even got Carol and Rowena talking about making one!

Ann's Transom Window is almost entirely cut out now and it's another window that's far beyond the reach of a beginner student.  The center is flawless and Ann will be grinding the final border to match when she returns to class.  This is going to be a very beautiful window.

Terry's got the first border on her spiral window and she's going to put it aside and work on the top section of this design before she attaches the final border.   She already has the front of this soldered so when she comes back to it there will be little left to deal with. 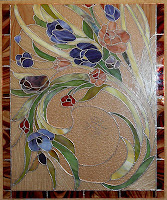 Linda's Turkey almost had a very different look to it but the background glass that she originally picked was so brittle that it was breaking all over the place. After the third wild break Linda decided to re-think the glass for her background which, according to her, ended up being a much better fit for this panel-- and I agree. 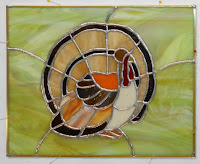 Bonnie started soldering the front side of her Study In Straight Cuts after getting all of her pieces tacked into place.  Pay close attention to how everything lines up because even after wrapping she still had wiggle room between all her pieces.  Carefully positioned of each piece makes it look absolutely perfect.  Tacking is about positioning all your pieces exactly where you want them and then securing them into place.  Proper positioning is something that makes or breaks a window and in this case it certainly makes it. 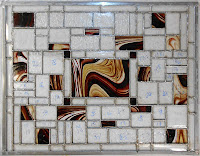 And in a similar vein we have Jan's own version of a Study In Straight Lines Window.  She completed all of her cutting using the pistol grip cutter and definitely has it mastered.  She's already moved over to the grinder and is using pins liberally to keep things lined up.  She's a good quarter of the way through grinding this already so things are moving along nice and smoothly for her.  It's all about using the proper tool for the job. 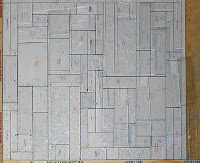 Martha got all of the background completed for her Fleur De Lis Window and what a great job she did cutting and grinding it.  She had cut out two pieces (slightly) ahead of time but they literally dropped into place so my hat goes off to her for a job well done.  She's worked out the colors for her double border which involved one simple change from her original idea-- reversing the colors.  We'll see them added next week. 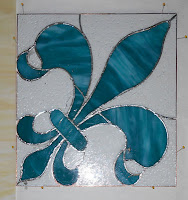 Cindy's got all of her glass cut for the center part of her LSU De Lis window and it's all ground as well.  She's taken it home with her to get some wrapping done and once this is tacked together she'll begin her fancy triple border.  Triple borders are a pain in the butt, but they're so worth the extra effort as you will see when this is completed. 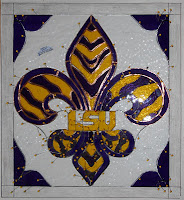 Here's a look at Vickie's Geometric Window which is 100% cut out now.  Vickie learned that filling in missing or broken pieces after a window is tacked together is the best way to handle a break.  There's no chance of accidentally reversing the piece and it fits perfectly the first time you cut it. 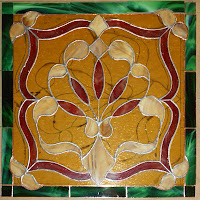 Sheri has almost all of the soldering done on her Fleur De Lis Window leaving her with just a line or two left on the back of the window.  That will go quickly and then Sheri will learn how to tin the brass channel and add hooks to it as well.  This window is practically a done deal so look to see this completed when we return next week. 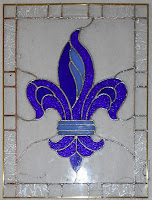 Sue Worked on a Heart Flag this week which is her own design.  She cut her strips at home and then made a blue heart which she placed in the upper left corner to really give it a flag like look.  She was originally going to center it but when we saw it placed in the corner we both knew instantly that was where it belonged.   She's got all but the back side soldered making this one very quick project for her.  Sue will certainly be starting something else when she returns next week. 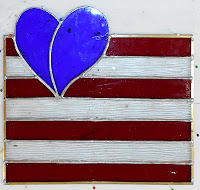 Rowena's working on a Transom Window of her own involving a lot of bevels and a a house number thrown in the middle of it for good measure.  She got her numbers all cut, ground, wrapped, and tacked together while she was in class this week and when she returns she'll start cutting the background for this (large) window.

And Shelly has all of the glass cut out for her Red Fish Window and has moved onto the grinding phase of her project.  She's doing great and I love how sure she's become of herself and her glass making skills.  This is going to look great and it's all coming together before our eyes. 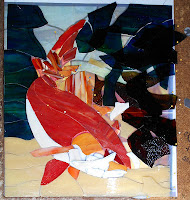 Janet has returned and came in with a larger pattern of 'our' new butterfly Lawn Ornament pattern.  She's already got both of her butterflies cut out so she'll be grinding when she comes back in.  These are a little larger than the one that Betty made which brings up an interesting observation that I've made.  Each class appears to have its own idea as to what size a Lawn Ornament should be.  We always end up with three sizes: Small, Medium and Large.  This one that Janet is making now is a large one. 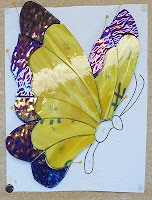 Betty began working on her own LSU De Lis Window and remembered how hard it is to see marks on dark glass!  She also learned that tiny, curvy pieces tend to waste a lot of glass since you have to position them far apart to be cut-able.  But even with all of that Betty is doing  a great job and this FDL is going to look wonderful. 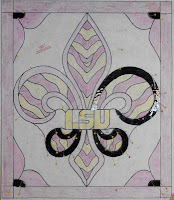 Finally (and by 'finally' I mean 'in conclusion') Jeanne has started working on her Mickey Mouse Window and has all of her glass picked out.  She's got his yellow shoes cut out as well but I didn't get a picture of it so you'll just have to look at this rough sketch  of her pattern. We'll get a real picture next week when she comes back in.

And that's it for the last week in March.   Time is certainly flying and we have another weekend Workshop coming up so expect and extra post sometime during the next week.