This week we'll start with a quick but very simple tip.   Before tracing your pattern pieces onto your glass be sure to wipe the glass off with a slightly damp paper towel.  This will clean away any dirt and allow the marker to set better on the glass which will help prevent your fingers from rubbing off the line as well as the water from the grinder.  You don't have to go crazy with glass cleaner and in a pinch even wiping over the glass with a dry paper towel is better than nothing at all.  Try it-- I guarantee that you'll see a difference.

First off in our completed project this week is a beautiful Magnolia Window that Gale made from a pattern that Becky S designed.  This is the first window that Gale has made since she came back and although she was a tad anxious about recalling what steps were involved this window proved my point that soldering is like riding a bike.  Once you know how to do it you never forget.  I love Gales use of colors in this window-- it's perfect. 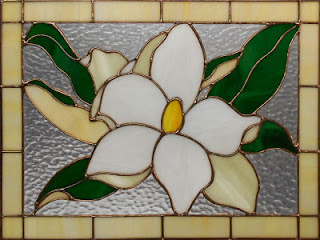 Sheri put the finishing touches on her Stylized Fleur De Lis Window this week and all of the effort that she put into this window shows in the end result.  I love the striking blue FDL which contrasts so vividly with the clears that make up the rest of the window.  and the use of just a few bevels along the border worked out wonderfully as well.  Sheri should be very proud of this especially since her first window with us. 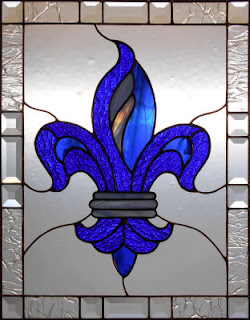 Bonnie started and completed these five Business Card Holders in record time.  She even put them all together herself with no help whatsoever.  What I love most about them is the fact that she used the factory irregular (but smooth) edge as part of the actual design!  Pay attention to the tops of the Lavender, Aqua-Green, and Blue Card Holders to see what I mean.  These are wonderful.

Linda F's Turkey Panel has been completed and I have to say that the change of color in her background glass DID make a big difference-- for the best!  Linda's been doing excellent work and this piece proves what I've been saying. 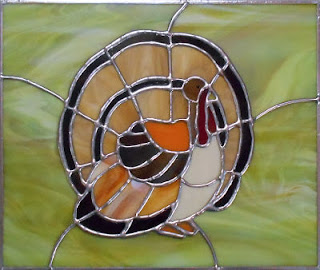 Susan's got all of her ducks Eggs in a row and they are all completed.  She came in and spend the day tacking and soldering them together and then getting them attached to their stakes as well.  By the time she left she had eight Eggs completed.  What's next for Susan, well, I have no clue (even though I distinctly recall asking her) which means that it will be fun to see what she comes up with when she returns. 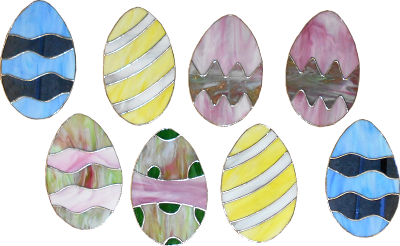 And Sue's American Heart Panel has been completed this week and what a wonderful piece of work it is.  The design has more than turned a few heads in class and Sue deserves all of the credit for that.  Great work all around makes this one very patriotic head turner. 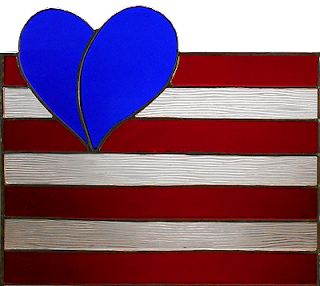 Judy's completed her three Butterfly Lawn Ornaments (just as expected) and she's just realized that she needs to make one more.  I don't know when that will happen but I must say that Judy did a wonderful job working on these.  They're perfect all around. 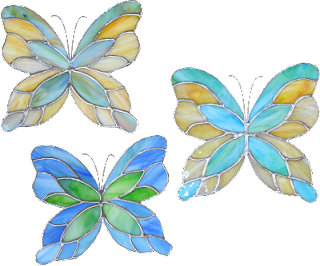 Betty also made a version of the standard Butterfly Lawn Ornament which she made in the same color scheme that she used for the new butterfly that she completed two weeks ago.  Betty's becoming a real pro at these and her color selections have all of our students looking for the same glass! 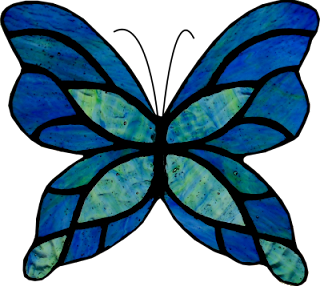 Rowena's Beveled Transom Window is well under way already with the entire right side of the bevel having its background glass cut.  There were a few close calls along the way to cutting this out because somehow I managed to screw up the center line while drawing the pattern, but since we always measure twice before cutting we discovered the mistake right way.  Now it's perfect and Rowena will get the remaining four pieces on the left side cut when she returns.

Carol's got two projects in the works.  The first is a Nativity Scene which is almost completely cut out and ground already and which will most likely get 'borderized' when it returns.  The second project she's working on is a Fleur De Lis window that she's converting from a Door Insert to a stand alone window.  Due to the design the window was made 'off center' which sounds odd but looks perfectly fine when you see this placed in the door it was designed for.  To change it to a stand alone window Carol had to cut off almost two inches of background glass from the left side of the Fleur de Lis.  That was done while the glass was still attached and I like to believe that Carol was impressed when she saw how easy it was to do.  Now the Fleur De Lis is perfectly centered in the window.

Jeannette's Peacock Window is so closed to being completely cut out that it's not even funny.  The border glass she picked is the perfect color for this window and the bevels look great cut into it.  She'll be finishing up the border pieces when she returns next week and I have no doubt that she'll have this ready for soldering by the following week.  This is just as spectacular as I thought it would be.

Jeanne has started cutting and grinding her Mickey Mouse Window and as you can see she's moving right along.  She's added a second button on Mickey's pants in keeping with the original design of Mickey Mouse and I suspect we'll see him fleshed out (or 'moused' out) even more when she returns to class.

Shelley came into class this week with all of her Red Fish Window cut out and ground.  Everything fit together beautifully so she began the arduous task of wrapping all of her pieces.She's made some major headway into foiling this window and she's taken it home with her to continue the job throughout the week. 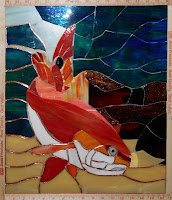 Janet's pair of Butterfly Lawn Ornaments are both ground with one of them being almost completely wrapped as well.  It certainly won't take long before we see these completed.  I'm even tempted to say that it will happen next week...

Vickie's Geometric Window is all soldered and ready to be washed and colored.  In just one class she was able to solder the entire window (front and back) which is easy to do if you don't care what your soldering looks like, but her work shows that she DID care what it looked like.  Expect to see this among our completed windows next week. 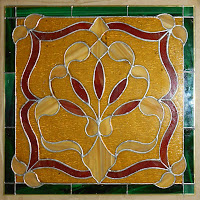 Cindy somehow lost two pieces of her upper left corners but that didn't stop her from tacking what she had together and getting started on the triple border of her LSU Fleur De Lis Window.  And wouldn't you know it-- a few days after she left I found one of the pieces in the yard.  Things always turn up when you lose them, but generally AFTER you've re-cut the piece. 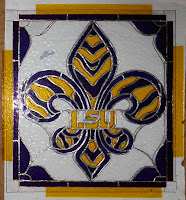 And here's Betty's version of the same LSU Fleur De Lis.  She's decided to grind as she goes along so it's fitting together spectacularly already. I'm pretty sure that Betty will be going with a single border on hers though.  Also, Betty insists that this is one window that she won't be making two of. 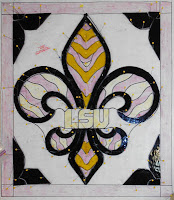 Linda L's three Easter Rabbit Panels are almost completed with all of the soldering completed and the brass channels added.  The only thing left to do is to add wire whiskers, patina them and then clean these windows.  Look for a Mickey Mouse lamp to be started by Linda when she returns next week. 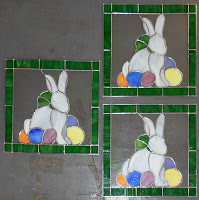 Jan may be our newest student but that doesn't mean she can't keep up with the pro's. The fact is that she's keeping up with students that have been here for months already!  Her rendition of a Study in Straight Cuts is moving right along.  She completed all of her grinding and she's even begun wrapping her pieces already. 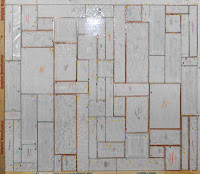 Ann's Cross Transom Window is nearing completion already.  She's got all of the final intricate border cut out and more than half of it ground already.  Ann is a practically a grinding and wrapping 'machine' so I have no doubt that she'll be wrapping pieces when she returns to class.

With a smaller test run under her belt Becky S has dove head first into this larger and even more elaborate version of the Spiral Window.  This one is twice the size of her last one and will add another lead border into the mix complete with decorations embedded into the solder.  I know that she had a great time making the first one and I'm absolutely positive that she's going to love making this one because the cuts will be less demanding and the amount of lead she gets to 'decorate' with will be on a larger scale. 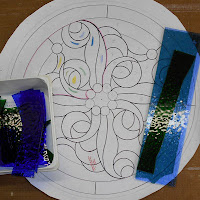 Myrt has started this small Cardinal Window and has all of the red glass cut out and somewhat ground already.  She had seen Terry and Martha's versions of this design and decided to make one of her own.

Linda F's latest Study in Straight Lines is all cut out and mostly ground to boot.  She doesn't have the border cut to size yet but the strips are cut to the correct width which means that the hardest part of the border is done.  Linda's got an excellent eye because every line in this window is perfect. 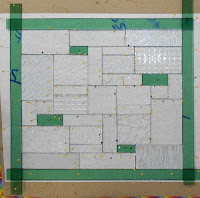 Sue also managed to work on her own version of the newest Butterfly Lawn Ornament that's been making waves throughout our classes.  As you can see she has this almost completely ground which means that we'll be attaching this to a stake when Sue returns.

Last but not least we have a look at the pattern that Brenda will begin working on next week.  This week saw her combining two different fish patterns resulting on the pattern that you see here proving that Brenda's a reel expert and can tackle anything.

That wraps thing up for this week.  We had an amazingly busy Weekend Workshop on Saturday and Sunday and wait until you see all that was accomplished in that two day class.  I'm getting tired just thinking about it!