This weeks tip is a simple but important one.  When you wrap your pieces be sure that your glass is clean.  Even a weeks worth of accumulated dust will affect the way the foil sticks to the glass.  Never forget that the strength of your window is determined by the lead that holds it all together and that lead, in turn, is secured by the foil you wrap you glass with.  If the foil isn't  adhering to your glass well, then the lead is only decoration.  Always wash your pieces if you see they are dirty or if the foil isn't sticking well.

Barbara H completed her Crab Window and did quite the bang up job on it as is plainly evident.   She's really caught on to the soldering process and you can see from the finished look of the window that there's little room for improvement.  Slow but steady always wins the race when it comes down to soldering.  The other thing that I like about this window is the irregular border that really sets the entire window off. 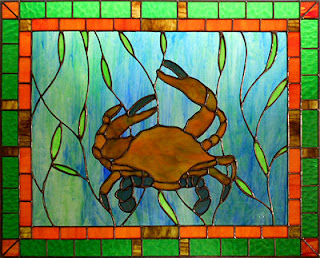 Bonnie's circular female Cardinal Window is finished and it matches her other Cardinal Window wonderfully.  Bonnie's so good that when she finished soldering the second side of this she took it to straight to the sink, washed it, and then colored it.  She never asked once if I look over her solder because she knew she had done a spectacular job.  And it shows in the picture below. 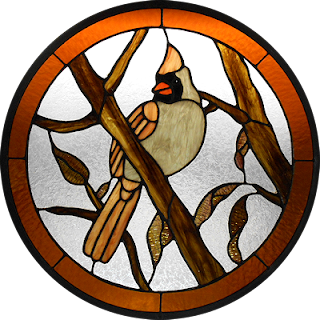 Susan R completed her Summer scene and has used contrast perfectly in this window.  The letters stand out easily from the lighter pastel colors that make up a lot of this window.  Susan's lettering is beautiful in this. 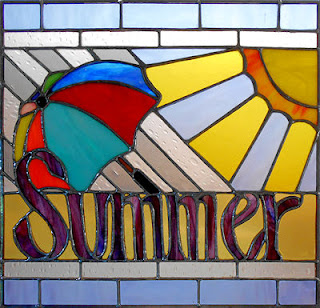 A few weeks back we saw Terry's second, top section of her Spiraling Flowers window completed.  This week we can show you the full effect of both windows because they were installed this past week.  Go ahead and tell me this isn't something you wouldn't want in your home-- I won't believe you! 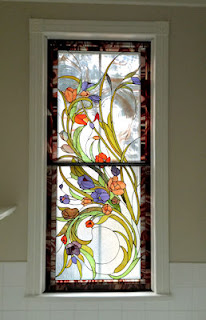 Cindy completed this Diamond Fleur De Lis and although there was a minor issue while she was making it, it looks perfect now with the workaround that we used to cover an issue.  The real beauty of this window is that you'd never suspect anything went wrong when looking at the finished window. And the reason for that is because the problem was handled beautifully, like the window itself. 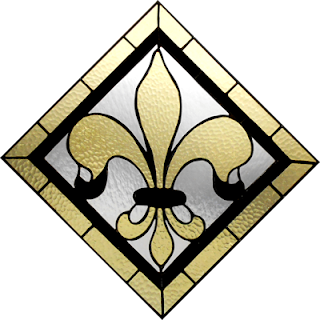 Jeannette completed this version of our most popular Nativity Scene and she's done a fantastic job.  Her work has grown in leaps and bounds and the speed and accuracy in which she completed this demands admiration (and believe me, the pieces in this window fit together wondrously!) 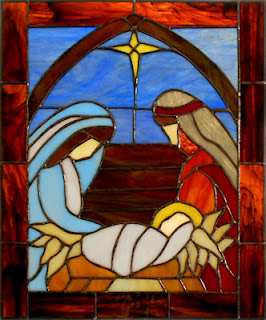 Susan D has finished five more flower suncatchers for her project.  We've seen a ton of leaves and bugs and flowers get completed and will continue along the same path when she returns.  Sparse is that last thing you'll think when you see her project completed. Betty finished work on both her beveled Fleur De Lis Window and her Single Sunflower.  She seems to have these down pat now and has even cut her own channel for one of these windows.  It won't be long before Betty won't need me anymore. 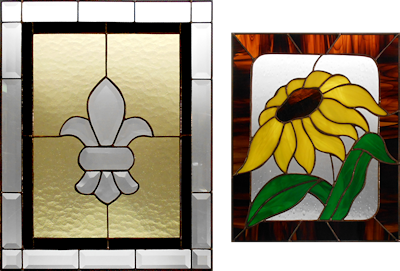 Carol finished another Robin but this one is going to hang as a suncatcher rather than mount as a Lawn Ornament.  She also added an extra feather on the back of this Robin to balance things out better. 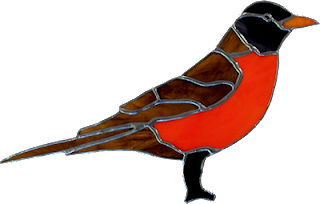 Rowena has the bottom tail feathers of her peacock window all cut, ground, and tacked together already!  I can't believe how quickly this is coming together.   She's started working on the top section of the window and to make things easier for her she's ground the body feathers to mesh perfectly with the tail feathers and will now remove the tail section so the window is more easily moved in and out of the shop.  This is a key element to working on large window:  Do it in sections!

Mary Grace got the background almost completely cut out for the letter section of her Welcome Window and learned how a piece of glass only 3/4 the length 'needed' could be stretched out.  There are only 3 pieces left to cut and then Mary Grace will add her final border. 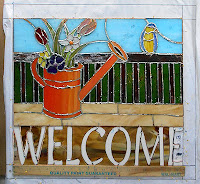 Betty also began working on this long Nativity Scene window and is already well underway cutting the glass for it.  She's done this one before so the only surprise she had while working on it was that it wasn't the pattern she thought it was.  It certainly won't go to waste, however, so Betty will complete it and then move on to that other Nativity Window-- the right one..

Brenda did indeed stop working on her duck window and is now happily wrapping bevels.  She had to cut and grind four of the straight bevels so they line up nicely with the large bevel cluster in the center but that was child's play.  You just cut close to the line, snap it in half, and then grind to fit.  Cutting the bevel is easy-- it's wrapping the cut bevel that can drive you crazy!

Carol has begun working on a new panel lamp.  This will be her third lamp and it's based on the Peacock Feather window that I had made for a customer years ago.  Regular blog readers may recognize it as the lamp that Susan R completed a while back but Carol has put her own spin on it by omitting pieces and coloring it her own way.  I like that!

Sheri is making amazing progress on her Flowers and Fleur De Lis Window.  With the two flower panels already tacked together she's moved along to cutting the straight strips in the center section.  Since the cuts are straight Sheri got a pistol grip lesson!  After passing it with flying colors she moved on to cutting her actual pieces.  Looking at this window I have to say that she's got the hardest parts of it completed and that she will find that working on the rest of this project will go quickly and easily.

Terry got all the background cut for her window and only has the border left to cut.  She'll do the border after everything is ground and fitting together and this is the correct was to handle a window like this.

Cindy's Sugar Skull is nearing completion and although you can't see his teeth in this picture, they exist as a separate piece.  Cindy has cut one piece of glass to fill in the opened mouth and then covered that piece completely with foil.  Now she's removing the areas that will form the teeth and once everything is soldered she'll have a large black section with white teeth inside of it.  You'll see exactly how that looks next week when Cindy returns. 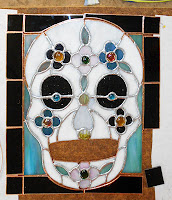 Jeanne resumed foiling the pieces in her Fleur De Tiger window and things are really coming together now.  Perfect fits are NOT required for this project because of the leading technique that she will be using.  It still looks great already and Jeanne has learned that with tiger stripes it's not all that important to follow the pattern exactly.  That's the beauty of nature! 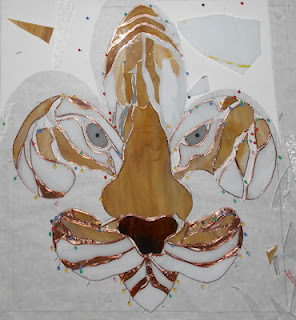 Shelley finished her Boat Window while at home but will bring it in next week so I can get a completed picture of it.   Since finishing that window she's begun work on this Rose in a Vase panel whose vase is constructed from puzzle pieces to represent the Autism Logo.  What an interesting twist on a rose window! 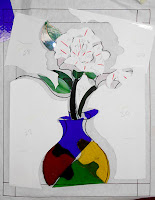 Linda L has so much of her Fleur De Lis Window cut out and ground already.  She's now working on the thin clear texture pieces that runs inside the bands of lead in the actual Fleur De Lis design.  Her work is perfect and I have no doubt that Linda will love this window when it's completed. 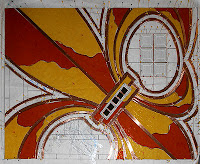 Myrt worked on grinding her mermaid window and believes that she'll be able to complete the grinding on this when she returns next week.  I believe she will as well.  She got the majority of it fitting together and only actually has a few pieces left to go

Next we take a look at Lara's version of the same Mermaid that Myrt is working on which is just set in a different part of the Sea.   Lara has her thin inner border firmly attached to her window and will tack the second border on when she comes back.  Once that's tacked together she can begin the actual solder process which will involve a lot of jumping around on this window since there are so many thin pieces that can easily crack if too much heat stays on them for too long. 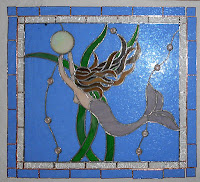 Linda F's Pumpkin Window is all tacked together and even has its channel attached.  That means that she only has to solder this to finish it off which also means that we'll most assuredly see this completed next week! 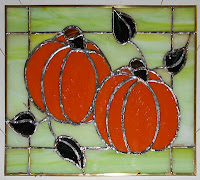 Ann now has the final border of her large Fleur De Lis Window attached and it's all ready for a zinc channel to be attached.  She's also started soldering the front of this so it's coming right along with no wasted time at all. 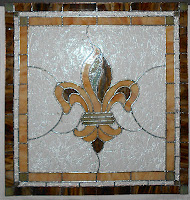 Becky S has all the glass cut for her mid-sized Magnolia Window which includes the outer clear border that is barely visible in the picture.  The texture of the glass she's using in the final border matches the board she's working on so perfectly that I was losing track of the pieces that were set away from the window.  They are in the picture though and next week you may very well see this completed. 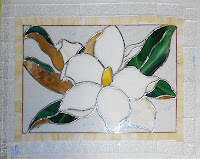 Tasha has begun cutting the glass for her 3D Flower Mirror and is moving along nicely with it.  Although the pieces are small, they aren't tiny enough to cause problems.  Sometimes when you cut small pieces you have to grind them into shape but these are big enough for us to recognize the pieces before they even come in contact with the grinder.

Lastly, Susan R began work on a stained glass box and has designed the top herself.  I'm sure the top will be completed when Susan comes back to class and then she'll work on making the box bottom to attach this to. 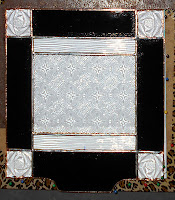 And with that we'll call this a week!