Where The Oeuvre Isn't Monochromatic

When soldering a window it's very easy to suddenly notice that your bigger joints are flooded with solder.  Even the most innocent joint can have many connectors as you can see below.  You;d expect the flower center to have 6 connectors but there's a leaf in the lower right with 6 connections as well!  These are easy to overfill with solder unless you know the simple trick around it. 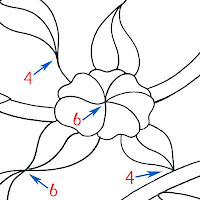 Simply draw outward from the joints rather than into the joint.  It's true that you'll always have a connector on both ends but when you see a joint begin to fill with solder take a minute to draw some of that solder out and onto the other lines running into it.  Also remember that you should  never have your solder on your soldering iron tip when you come into a joint.  Always remove your lead from your iron at least a half inch before you stop. 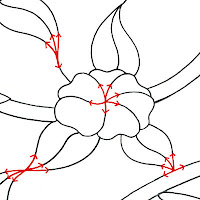 So Betty's Kokoppelli Window was completed this week and I have to say that it made a wonderful conversion from Indian art to a modern stained glass window.  The black glass that she used makes up for the lack of detail in the man by turning it into a silhouette.  Perfect! 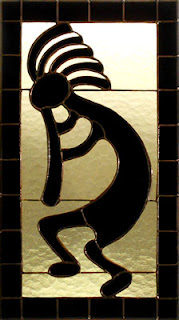 Charlie's American Flag Window turned out to be one of the nicest Flags I've seen yet.  His insistence that the flag have furls paid off in dividends for this project.  So far the stars are a blank but I think a silver paint pen will most likely come out when he gets this home. 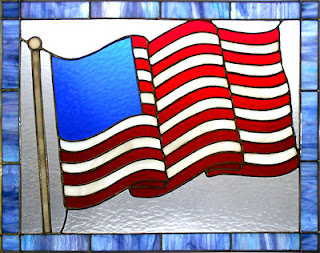 Carol finished her first Robin Redbreast Lawn Ornament and has done a bang up job on it.  This would even look great surrounded in glass to make it an actual window. 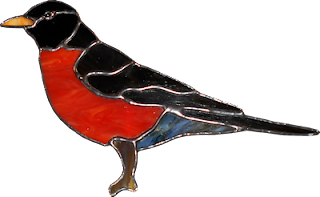 Susan D finished three more of her Flower Suncatchers that will form her Flower Cornucopia.  She also had a slew of leaves in tow with her so I think things are really coming together for her. 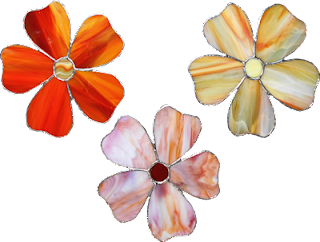 Betty also finished this Angel Window that she's always been so fond of.  It's a great window and according to Betty it's a great gift or donation as well. 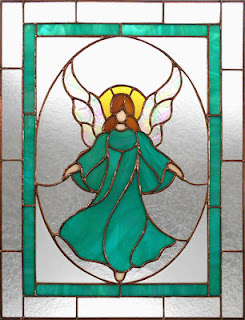 Becky S started cutting on this Magnolia Window that she traced the pattern out for last week.   With the flower and leaves all cut I'd say that she's making excellent progress.   This window is the perfect size for this pattern-- not too large and not too small.  Sometimes the size of a window affects its overall interpretation (far too often you'll see a small window blown up larger than it should be) but in this case it's a perfect match for perfection. 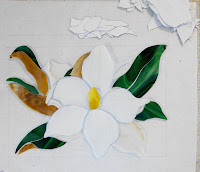 Sheri began working on her Flowers and Fleur De Lis Window and has learned how to look for repeated patterns throughout a window to make things easier to cut out.  This window repeats in quarter sections so only 1/4 of the pattern had to be traced.   Sheri traced each of her pieces onto the glass in two's, first two on the front and then two backwards.  This gives her all the pieces for the entire window while only having to trace one quarter the amount of paper pattern pieces.

Brenda took one look at the pattern for her Transom Window and forgot all about her Duck Panel.   The inner beveled border adds so much to this design including extra strength which is why she's making this window in one long piece rather than three sections as originally planned.  She's wrapping her bevels now and once that's finished there will only be a handful of background pieces (20) to cut out.

Linda F has all but her border cut ground and ready to wrap on her pumpkin panel.   This is going to be a popular pattern as I already know someone who plans on starting one of their own next week. 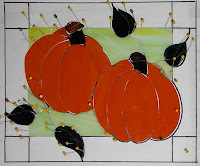 Jeannette came in with this Nativity Scene almost completely cut, ground and wrapped.  After cutting out the pieces for her sky she tacked everything together and then added a final border.   That means that this window is done save for the soldering!   Talk about fast and proficient.  Jeannette has done an amazing job on this while she was at home. 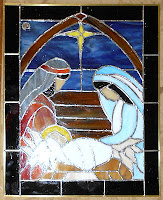 Paula  completed the top of her UL Box and then began working on a Sunflower Box Top.  With the sunflower all ground and tacked together she then traced it onto the piece of tan glass that she's using for the background and then cut and ground those (tiny) background pieces.   By the time the night ended Paula was ready for solder.  Next week we're going to see at least one of these boxes get its bottom attached.

Cindy resumed work on her Sugar Skull and has changed the glass that the skull will be cut from.  She was originally going to use a clear non-glare glass but has now decided to cut it from a standard Spectrum White.  The change is a good one in my opinion because clear textured glass is still clear and skulls are traditionally white.  Cindy also got the final border cut for her Fleur De Lis Window as well which means that these are both almost complete.

Terry has begun cutting out the pieces to her humming bird window and has things moving along nicely.  Once she's got the oval center tacked together she'll cut four corners on it to 'rectangle it out' and then add a final border.

Linda L is making incredible progress on her Fleur De Lis Window and this week you can see just how this window will look once it's finished.   Her work is flawless and Linda is proving herself to be an excellent glass craftswoman! 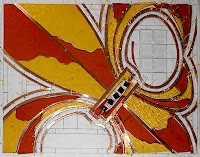 Mary Grace now has the top section of her Welcome Window tacked together and has begun working on the bottom letter section of the window.  When working on letters we break the rules and cut out ONLY the pieces that make the letters and then grind them to fit inside a frame (made by the actual window and a wooden yardstick in this case).  The grinding of the letters determines the quality of the 'handwriting' in the finished window and cutting the background afterwards helps maintain a nice even fit.  Mary Grace cut her letters from white glass which you'll see far easier when her background is cut. 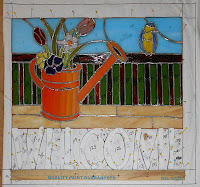 Myrt now has all of the water cut out for her mermaid window and has even begun grinding it.  And yes, those are actual Sea Shells that she has in the corners.  Next week she'll place the rest of the mermaid pieces in the window to avoid and problems as she's grinding.  This mermaid even has a name but you'll have to ask Myrt what it is.

Susan R has almost completed her Summer Window and now only has the back side left to solder.  We found a heat crack in one of the outer border pieces and luck was with us because it was discovered BEFORE the channel was put on (which would have made the repair harder if it were already attached).  You can't see any sign of the repair and that's how we like things to appear after  'disaster' strikes. 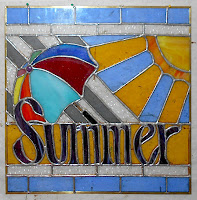 Rowena  is making her Peacock window look downright easy.  All of her bottom feathers have been cut out and a lot of it has been ground as well.  Once this section is completely tacked she'll move along to the top section of the window where the pieces are bigger and easier to work with.

Bonnie got her border attached to her circular female Cardinal Window and has the front side soldered as well.  When she comes back in she'll get the round zinc channel attached and then flip this over to finish it all off. 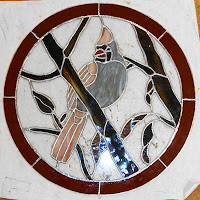 Barbara had a class to herself this week which enable her to get some quality work done on her Crab Window.  With the front side completely soldered and the back side only needing the borders soldered I think it's safe to say that this will be finished when Barbara comes back in next week. 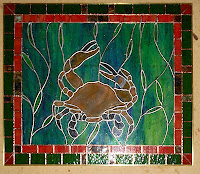 Ann's got all of the glass cut out now on her Fleur De Lis Window and only needs to skim, wrap, and tack the third and final border into place.  Once that's done (next week) we'll get the zinc channel attached and then she can begin soldering.  I'm thinking that it won't be long until she gets to work on the Cross Window that she really wants to get cutting on. 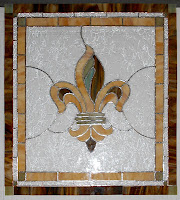 Shelley and Chad got the borders attached on their Boat Window and by the time Shelley left class she had a zinc channel surrounding her window to give it some added stability.  The front side is  completely soldered and the back is nearly there already.  Shelley's on a roll!

Lara's version of the Mermaid Window is all wrapped and ready to be tacked.   We've discussed what she should do with a border and I think we have her convinced to give this a double border.  Lara talked about a clear texture for the inner accent border but I have another idea that I'm going to show her when she comes back in next week. 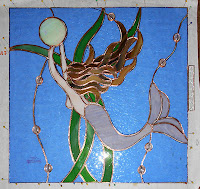 Martha put the last few pieces of her background in place and even hid a break in the best way possible.  One of the pieces of background was just a bit too curvy to cut without breaking so we added another lemon to the pattern to cut it in two and now everything is hunky dory!

Carol has two more of her Robin Redbreasts in the works and they're almost finished so she'll be moving along to something new (like the lamp pattern that you see above the right Robin) real soon now. 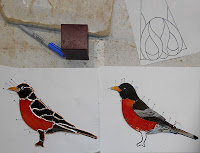 Lastly there's Betty who also worked on a Sunflower Panel as well as a Beveled Fleur De Lis Window.  These are very near completion and I think we'll see one of them finished when she returns next week.

And that's about it this time around. Classes start again tomorrow and I'm all ready for them!