Foiling is indeed an art form.  Getting foil applied evenly takes practice and even when you finally get it close to perfection you still end up with pieces that need trimming.  When the foil doesn't properly overlap you get what we call 'stair steps'.  The thing is, you HAVE to trim these or your soldering will look messy.  You may think that it's not that big a deal but it's something that people who don't make glass pick up on right away when they see it staring them in the face.  All it takes is a sharp razor knife or Exacto Blade and you can nip that problem right in the bud, but there's a trick to it and I'm going to show it to you now.

Don't do what most people do and try to star trimming at the small end.  Take your SHARP blade and place it where you see the red arrow in the picture below and then follow the blue arrows by pulling your blade downward.  It you apply just a little bit of pressure you'll feel the blade follow the edge of the foil that's underneath the step thus creating a perfect line.  It's not only easy to do but it's quick as well.  More importantly, it's the difference between a beginner's stained glass piece and a professionals. 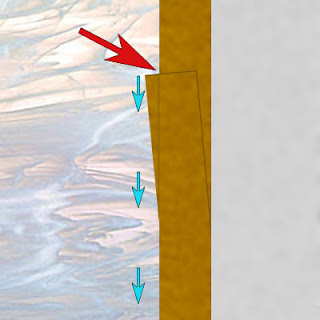 This week we got to see Bonnie complete her version of a Candy Skull and although it's a bit 'darker' than the one that Cindy did  just as eye catching (or possibly even arresting).  This window will always get noticed and when you actually see it you can' help but think, "Wow, that's a job well done!"  And considering the fact that today is Halloween, it's timely as well! 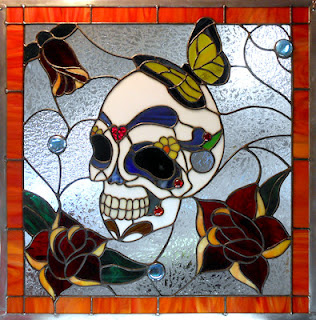 Carol finished her cross window and did an incredible job on it.  Her lines are all straight as an arrow, the solder never pools at the joints, and the colors are impeccable.  Just look at that deep purple background.  This picture was taken in direct sunlight so you know it's a dark piece of glass!  Carol also made a rather adorable Frog Nightlight which she purchased it as a kit but now that she has the pattern it will be easy to do on her own any time she wants to. 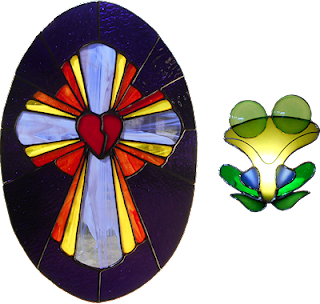 Susan D had a deadline when it came to finishing of this LSU Tiger and here we are near the end of October and the window has been completed with time to spare.  In fact, she not only finished this while she was in class this week but she also resumed work n her Flower Cornucopia as well.  This woman is all about progress. 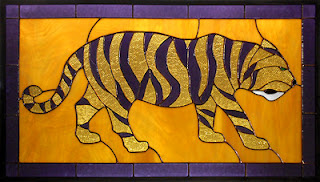 Susan R put the finishing touches on her Christmas Tree Panel Insert and did a great job converting a suncatcher into a stand alone window.  She even handled the border all by herself so kudos for that! This will slide into a frame and decorate her yard nicely. 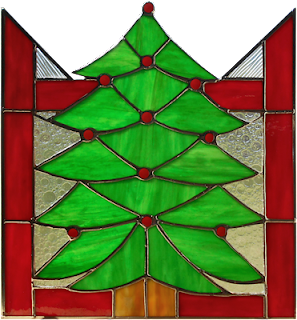 Cindy missed class this week due to a cold but she sent me these three pictures of her latest creations.   Beautiful work all done without a lick of help from me at all.  Nice job! 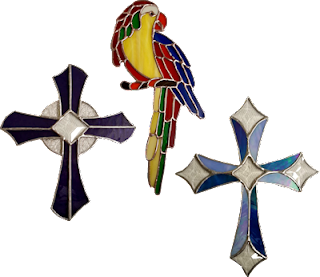 Terry completed the soldering on her two 'S' Windows and once we got some hooks attached to them she was able to get them both washed, colored and waxed in time for a photograph. 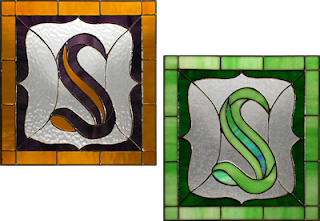 Ann came in with her pattern under her arm this week, laid out all of the pieces that she cut out onto it, and then cut the few remaining  pieces that she had left.  Once that was done she began grinding.  Now you see can without a doubt that this is her latest Cross Window.  Ann made short work of the cutting process and her grinding is going along smoothly as well.  (Get it?  'Smoothly') 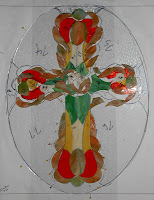 Jeanne's background glass arrived just in time for her to begin cutting it out to square off her Tiger De Lis Window.  It's all ground and wrapped so next week Jeanne can add a border (or two). This background may look black but it is the same DARK purple that Carol used as background for her Cross window up above.  I can't wait to see what she has planned for a border. 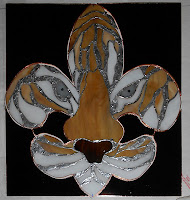 Then we have Paula who got two more box tops completed.Although I love them both I am a bit partial to the piano one because (like me) it breaks the rules.   Once it's attached to its bottom you'll see exactly what I mean.   Paula also has her next pattern drawn up, sized and ready to go and you'll see what that is when she returns.

Lara finished cutting all of the glass for her African Woman Window and has moved on over to a grinder to get everything to fit together.  She's new enough to be overly concerned about how her pieces haven't fit together but that is par for the course when it comes to stained glass.  Even with 35 years of experience under my belt I still can't get things to fit without grinding.  Lara has done excellent work on this and her work at the grinder is easily fixing all the small problems that she sees in this project.

Sheri continued cutting the glass on her Peacock Window and it's all coming together just two weeks into this project.  Since the background consists of a checkerboard pattern Sheri will tack the peacock together before cutting any of the background.  This is not how we normally do things but it will keep the grid lines lined up perfectly which is almost impossible to do when you cut them out one piece at a time.

Shelley started cutting out a Kokopelli Indian Window and got most of the background out of the way already.   She's also completed her Flower/Puzzle/Autism Window and will bring that in next week so I can get a final picture of it.  Expect to see that when we return along with the black Indian pieces of this window cut out.

Martha began work on two separate mid size windows-- a Sunflower and a Pair of Pumpkins.  As you can see she's well underway on both of these so I won't be surprised to see her finish these very shortly.  She's gotten these wrapped while she was at home because I got a picture from her along with the words: "I can see so much better"!  Her eye surgery was apparently a smashing success.

Lynn M spent the night cutting glass for her Tree Of Life Window and this appears to be a window that I'm going to have to make for myself as well.  The colors and the meaning all make for a fun yet beautiful design that Lynn is doing a wonderful job with.  This one is going to turn heads for sure. 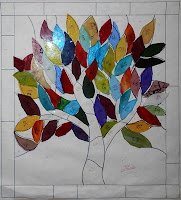 Linda F Got a whole boatload of work done on her Autumn Leaves scene leaving just the glass for her two borders left to cut out.  As we all know, we don't do borders until the center 'framed' section is all ground, wrapped and tacked so that is what Linda will being doing next on this window.

With all three sections of her flowers completed, Tasha is all set to cut the mirror and the glass for the tray and then put this mid sized vanity mirror together.  I'm going to state here and now before this gets any further along that this is going to look amazing when we see it again next week.  Just you wait and see.

Rowena's Peacock now has the second side of its final border all cut, ground and wrapped.   As I expected, this went far quicker than it did on the first side because now she knows exactly how to position everything .   Since the length of the top and bottom borders are about equal to one of the side borders I have no doubt that she'll get this all cut out next week and maybe even begin soldering it.

Roxane resumed work on the wrapping stage of her Duck Window.  Her foiling is flawless and that means that her lead lines are going to be nice, even, and consistent.  With only a few pieces left to go I have no doubt that we'll see a border get attached to this when Roxane comes back in.

Brenda has all but four small pieces of border attached to her Beveled Transom Window and is just about to begin soldering.  We've worked out the bevels for the two smaller side panels that will accompany this Window and we'll see Brenda start those as soon as this one is completed.

Mary Grace got all but the border cut out for her version of the double Pumpkin Window that is so popular right now.   She's decided to use a glass called 'Fractures and Streamers' for her background which gives this (and Linda's Autumn Leaves Window) a wonderful look. 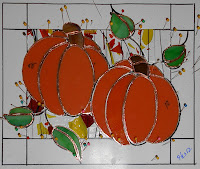 Myrt has the front of her Mermaid Window all soldered and is ready to start working on the back side of it already.   She has it flipped over and ready to go so I have no doubt that she'll have this completed when she comes back in.

I didn't get a picture of Becky's Window before she left class but she's begun grinding all of her flowers and this is another window that is going to look spectacular.  When you see it next you you won't believe how colorful and elegant it looks. 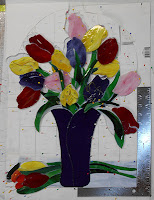 And to wrap this all up, we take a look at the Pumpkin Suncatcher that Susan R started.  When you get right down to it she almost finished it because all this needs is solder on it now. 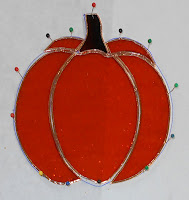 And that covers our last week in October.  The year is ending quickly and Christmas is already in the air as you will soon see in the pictures yet to come.