Don't Be The Other Rooster

So we're going to start things off with a few glass terms that we need to clear up.

Ground -  it's what happens to glass after you grind it to make it fit.  No matter what you might think, you've never GRINDED your glass-- you've GROUND it.

Soldering Iron - What you use to melt lead onto your project.  It's certainly NOT a curling iron.

Flux - The mild acid that we use to clean the foil with before soldering.  I have no clue what flex is but we don't use it to make stained glass.

Pistol Grip Cutter - This is the glass cutter that has a colored handle on it and somewhat resembles a gun.

Strip Cutter - This is the cutter that resembles the letter 't' and MUST be used with a board to cut out the strips that make your borders.

Those are the few that I constantly hear used incorrectly almost every week that I feel the need to point out.


Okay, so this week we see Susan D's Flower Cornucopia completed.   There are so many piece of glass in this project that I can't begin to count them.   The beautiful part about this is that Susan made it completely on her own with no help from anyone (me) at all.  I wrapped a few pieces of glass here and there but the assembly process was done entirely by Susan and that, like this project, is spectacular! 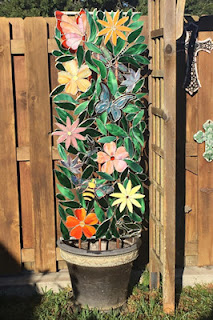 Myrt's Mermaid window is now one for the history books.  She finished the soldering, washed it, colored it, washed it again, and then waxed it to end up with the finished window you see below.  Although I missed it, I heard that her washing this window in the sink was a thrill a minute ride that had other students on the edge of their seats and even gasping (yes!) aloud! 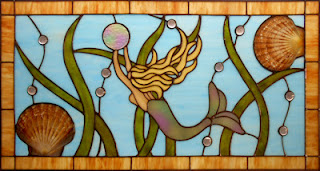 Martha put the finishing touches  on her Sunflowers and Pumpkins Windows and did a great job getting them completed quickly and efficiently.  She'll be having more eye surgery next week so she'll miss out on class and we'll miss out on her.  Get better soon! 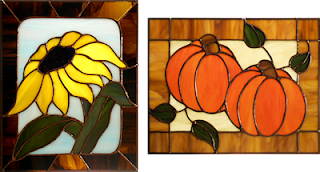 Betty completed both a Nativity scene and another Pumpkin Window this week.  No dogs ran into her yard while she was making these, and no police were involved (this time around). 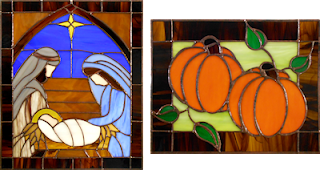 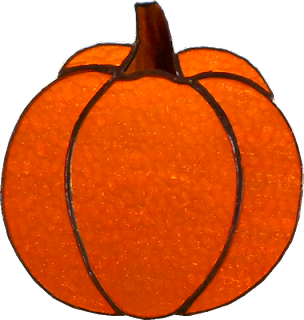 Then there's Bonnie who began working on a new window after settling on this very tradition design.  She has most of the hard parts cut out and will finish up the cutting on this when she returns.  By the way, Bonnie is making this using only one fourth of the pattern.  We'll discuss that in a later update.

Lara's African Woman is amazingly stunning.  With most of it ground you can really see what this window is all about.  It's striking and, dare I say it, breath taking!  I'm also impressed at how quickly and effortlessly Lara is moving along on this.

It's amazing how much of a change a little solder and some background glass can make.  Jeanne's Tiger De Lis is about to get a coat of solder now that the the final two borders have been attached.   This window is turning out every bit as impressive as I thought it would be and I love being correct! 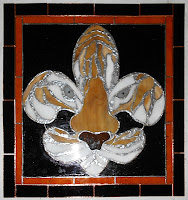 Judy has been as busy as can be and now has all of the hardest pieces of her Fleur De Seafood Window cut and ground. She plans on trying to foil what she has completed while she's at home.  We also discussed the idea of going with a leaded border around the Fleur De Lis and I think it would work wonderfully with this window. We'll see what happens soon enough. 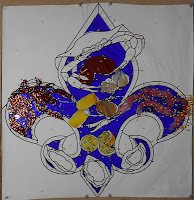 Next up, it's Minnie Mouse!  Jeannette has begun making Mickey's counterpart this week and has the majority of it cut out already.   This isn't even ground yet and it's fitting together beautifully.   It's excellent work and I think it's a stunning window already.

Brenda has begun soldering the front of her Transom Window and will begin the second side when she comes back in.  I lifted it up at one point and I have to say that even with only the front side being soldered this window has a nice solid feel to it.

And Ann's Cross is almost completely ground already.  There's no mistaking the skill involved in getting this cross this far along so quickly.  I love her colors and I love the design.  I just can't wait to see what border colors she will pick for this LARGE window!

Meanwhile, Terry is working on another large seasonal Holly Suncatcher.   As you can see she completely understands the use of similar but different shades of glass to achieve the underside of the ribbon that makes up the bow.   In stained glass it's the subtle differences (not the drastic ones) that really make a window stand out. 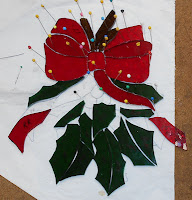 Cindy is making a Cross of her own and it's already looking great.   She's grinding as she goes along and I believe that there are only 16 pieces left to go on this.  We'll see Cindy knock out those pieces as quickly as can be in just seven short days. 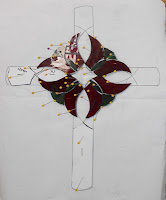 This week I managed to snag a picture of Becky S's Tulips Window and the colors are amazingly vibrant.  Becky has most of this ground and will cut the background glass after this is tacked together because her background will be cut into gridwork. 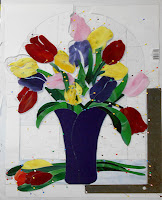 Carol's making a new panel lamp and this four sided lamp will consist of two sides of gridwork with a Detroit Lions logo on the other two sides.  It's a little hard to see what it will look like until all of the white glass gets foiled but it's going to be another winner of a lamp, that's for sure.

Paula's Wolf Box Top is officially tacked together and she'll put the actually solder bead on it at home.  When she came into class the moon was ever so slightly off and not quite rounded.   By removing just three pieces of glass we were able to fix the problem by simply grinding less than an eighth of an inch of glass off of a bottom sky piece, thus making the moon round again. I love easy fixes! 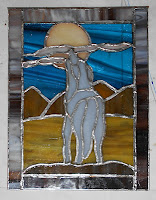 Susan R is making four(?) of these snow covered Christmas Trees but rather than making them as a scene she's making them as stand alone suncatchers. And what a nice job she's doing with them! 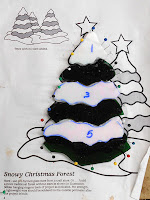 Shelley's Kokopelli Indian just needs his body and head pieces ground and then she'll be able to literally wrap this window up!   She's moving quickly and efficiently on this and I have no doubt that we'll see this completed before you know it.  Shelley wastes no time!

Linda L has the front side of her Industrial Fleur De Lis Window soldered and even got the zinc channel attached and covered in solder as well.  She's finished with the pattern and we'll soon see another variation of this window being made when Betty comes back in to class.  Meanwhile,  Linda L's certainly holds its own against the one I made a few months back. 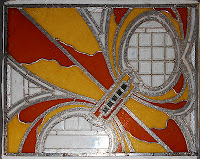 Sheri resumed work on her Peacock window and cut out accent pieces for the top part of the body.   When she cut the pieces and ground them into place I had to admit that I liked the splash of color the orange brought to the window. However, Sheri wasn't sure about the orange and in a gutsy move she's taken some green glass home with her so she can re-cut the orange pieces.  I can't wait to see what this may look like next week!  THIS JUST IN:   Sheri is keeping the orange glass and learning to love it since everyone else that she shows it to likes it as is.  Mob rules!

It's almost a wrap!  There are just three simple pieces left to re-cut in the border sections of Rowna's Peacock Window and that will happen within the first 15 minutes of Row's next class with us.  That means that for the next two or three weeks Rowena will be able to sit back and take it easy as she begins to solder this beast of a bird together.  She's on the final lap now!

Yep, it's another Pumpkin Window and this one is being assembled by Betty.  There's only the back side to go on this so next week we'll have two of these finished.   "Two?" you say? 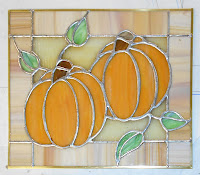 I did indeed say 'two'.  Here's the second pumpkin window that we'll see completed when we return.  Mary Grace decided NOT to use a different glass for her border because she really wanted the Fractures and Streamers glass that she used as a background to be more prominent throughout the window.   It looks great already and just wait until you see it with some light behind it to really show off the art glass that makes up the majority of this window. 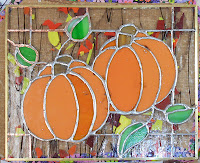 And last, but certainly not least, we take a look at  at Roxane's Mallard Window which not only got its border attached but it's entire front side soldered as well.  That mean that next week we'll see this lit up and featured in the completed projects section of the blog post.  She's done outstanding work on this and I have to commend her for what she's managed to accomplish on her own especially since she's one of our newest students. 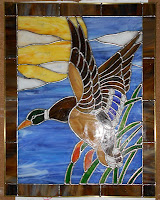 And that's all there is this week!