Because I Do Not Cook

Lately we have been having a lot of students second guessing their grain lines when tracing the paper pattern onto the glass.   Grain lines were drawn onto those paper pattern pieces to stop you from having to worry about how they should be positioned.  If you start angling them incorrectly you will lose the individuality of each piece by having everything run together.   In the first flower you can see how the grain should flow.  In the second picture the grain lines were ignored and everything was run left to right.  The flower petals look terrible because everything is 'connected' which makes the lines stand out more.   In the third image we placed the grain lines of each pieces so that the lines on the pieces matched the grain of the glass (I also stayed away from too many harsh straight lines.) When assembled the third flower has a much more natural flow.  Remember, don't second guess yourself-- just follow those grain lines!  You marked them so you could avoid all the giessing about pattern placement.

Judy's Seafood Fleur De Lis is finished and what a work of art it is!  Measuring a HUGE 28 x 30 inches she still has pieces that measure as small as an eighth of an inch wide.  Can this pattern be made smaller?  Sure, but the look would be completely different due to the lack of detail that makes this look as incredible as it does.   It may have taken a while but this is EXCEPTIONAL work. 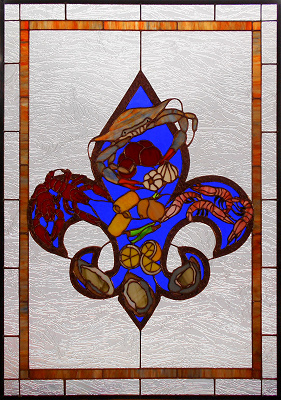 Linda F has completed her Dragonfly and Waterlilies window which is her largest creation to date.   She took her time and concentrated on the quality of her work over speed and the end result is not only stunning but something that she should be proud of.  There are a lot of pieces in this window but if you tackle them one at a time you end up with a finished project before you know it. 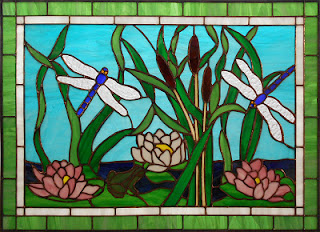 Lara finished her mothers Tree Of Life Window and all of those colors really make this piece a show stopper.  Normally I'm against using multiple colors in borders but this is one of those exceptions since the tree is so rich with color.  The border just ties it all together, don't you think? 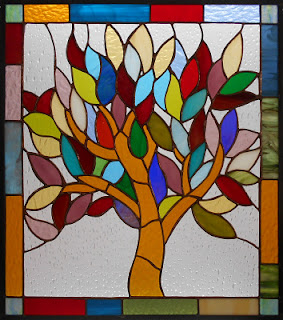 Myrt has her Humming bird window finished and to properly complete it we had to add a eyeball to the hummingbird using a  black glass bead as an overlay.    We were originally going to cut the eyeball into the glass but Myrt forgot and soldered the head into place before before drilling the hole for the eye!  As you can see the situation was handles wonderfully and Myrt's bird has sight! 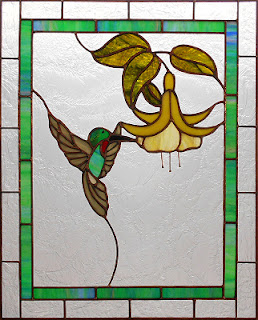 Paula's Wedding Box has been completed and she did a really spectacular job on it.   She completely understands the process of making a box now and has already begun work on a new box.   I've always felt that these make great Wedding gifts and I'm thinking that Paula agrees with me. 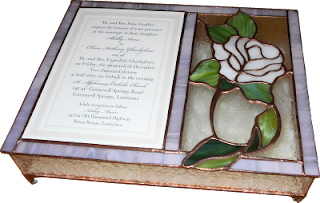 Rowena's latest Beveled Transom Window was completed this week and as expected it turned out beautiful.   She's gong to have to get into the Transom Window Business if she keeps up this pace!

Here's Linda L's latest Cardinal Suncatcher.  She's got one more of these to go so I'm pretty sure we'll see this pattern one more time next week and then Linda will move along to an Address Window of her own. 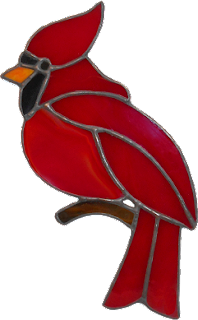 Susan D has more pieces for her Flower Cornucopia Display under way and these two were completed before she left class.  I'd say that slow and steady wins the race but Susan isn't moving slowly-- just at a nice steady and even pace that gets things done. 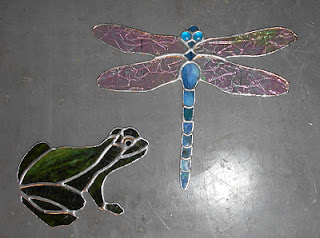 So Terry walked in the door with another window all cut out and ready to be ground.   This is an Egrets and Magnolia Window whose colors look phenomenal.  She ground a good portion of this while she was in class so who knows how far she'll be along on this when she returns. 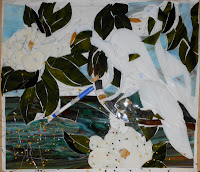 Cindy's panel lamp has hit a slight snag as the person she's making it  for wants to change some of the colors.  Since there is very little glass cut out it's a good time to change things up.   So while Cindy's lamp is on hold she's begun working on another Crab Tray that I'd forgotten all about.  She made one of these ages ago and it turned out great way back then.   From the looks of things this will will turn out great very shortly! 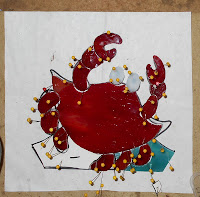 Mary's made major progress on her Birds Window and only has  the berries and her background left to cut.   We're going to pretend that there aren't any berries in this window and grind everything together before adding all of those small round berries.  This will ensure an absolutely perfect fit. 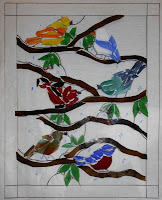 Sheri has begun cutting glass for her Crane Window and she's started by cutting out the subject of the window first. On a window with this many pieces you cut out your pattern pieces as you prepare to use them because cutting the pattern up all at once will result in slew of pieces that are too easy to lose and mix up. 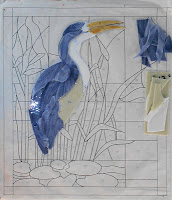 Bonnie's Peacock suncatcher is really coming together and she's now on a holding pattern waiting for a piece of glass to come in.  Since she's making a few of these peacocks she'll be able to begin cutting a second one as she awaits the arrival of her glass.

Tracey's begun work on a large Cardinal Window and she's just plowing through the creative process with it!  With almost all of the cardinal cut there isn't a lot left to go on this.

Here's the next Wedding box that Paula is making.   She came up with the design herself after watching me draw up the first one that she made.   Nothing slips past Paula and I have a sneaking suspicion that this will turn out every bit as good as her first Weeding Box (if not better). 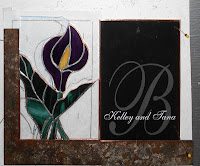 SusanR continued along whith her spring window.   With just the sky left to cut out she'll be finishing this up in no time at all. 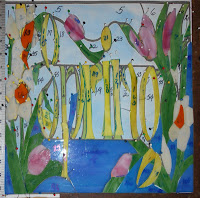 Carol's work on her Small Peacock Window is fast approaching an end.  With her background cut out and her bevel border already attached,  Carol was able to get her final border strips cut.   Once those pieces are cut into place this window will just need a quick solder job. 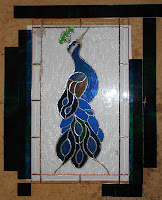 Jeannette's Duck Window is looking nothing short of amazing.  With about 70% of this ground she'll certainly begin wrapping these feathers when she comes back in.   Look at how beautiful her grinding is!   And Rowena is correct--- as beautiful as the sky looks the picture here on the Blog, it pales in comparison when you actually see it in person. 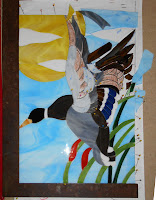 Melissa continued working on grinding all of the glass for her Semper Fi Window and she's moving along at a nice even pace.  She's fast approaching the end of this window and her grinding skills are as sharp as any of our 'professional' students.

Shelley started a Fleur De Lis Window when she walked in the door and by the time class was completed she had already begun grinding her pieces.  This is one of those rare windows where you complete the center subject matter without cutting out the background pieces. 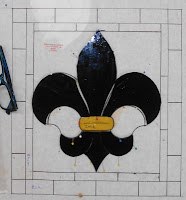 Jan has her two Flower Holders all wrapped and ready for solder.   Without a doubt these will  be completed upon her return and I cant wait to see how they look.

Becky S would surely have her Birds On A Wire Project completed if she weren't cutting out two of them.  In the picture below she's seperated the glass that makes these into two distinct windows  so all of her work is plain to see rather than stacked up on top of one another.

Brenda resumed work on her Stylized Fleur De Lis Window and has all of the glass cut, ground and wrapped.   With only soldering left to go I'm sure that she'll be wrapping this up when she comes back in. 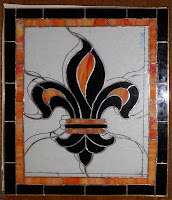 Martha has the first of her three Fleur De Lis' (the red one) all soldered and has a second just about completed.  I'm fairly sure that we'll see at least two of these washed and colored when she returns.

Barbara officially has all of the glass for her trees cut and ground into place.  She's taken it all home with her so she can hopefully wrap them in copper foil over the next two weeks (she'll be missing class next week) and once that's done we'll tack it together and then cat a sky to match the treeline.

Rowena has started working on a  new Flower Lawn Ornament.  This one has curved petals but will also have the 3D rim of petals around the center just like the Sunflowers Ornament does.

Linda L completed her second cardinal just as class was ending.   She making quick work with this one and quality is NOT an issue here. 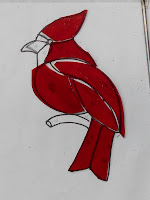 And that wraps things up this week!  Come back again next week when a new slew of window will be completed and we go over grains lines in more depth.