Say, "This Is A Platter"

Back to grain.  The first thing you should do before tracing out your paper pattern pieces is to wipe off the glass with a moist paper towel.  This will remove any surface dust that will make your marker lines wash off easily.  The next thing you should do is put a line on the glass to show which way the grain is running.  In the picture below my line didn't show up so I've 'enhanced' it with a red photoshop line which you can see on the left side of the glass.   Next position your pattern pieces so all the lines on the paper match the line you drew on the glass.  Positioning the pattern pieces as in the photo below is a good start but the lines are still very much off from the red line that I drew on the glass.  This is wrong 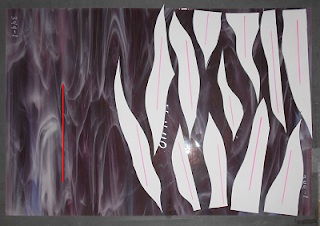 Below I've straightened my pattern pieces to perfectly match the line I'd drawn on the glass.   You may think that you don't need to mark your glass with a grain line but 50% of our students have issues with grain because they refuse to do this simple little step. 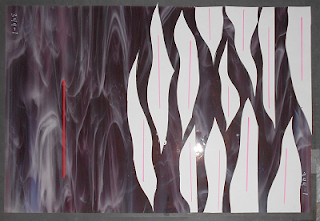 Okay then let's look at something completely different.  Jan came up with something completely unique and boy have the caught my attention.  these Stained Glass Air Plant Holders are the BOMB!  I really love how these turned out and Jan has already started making more of these. 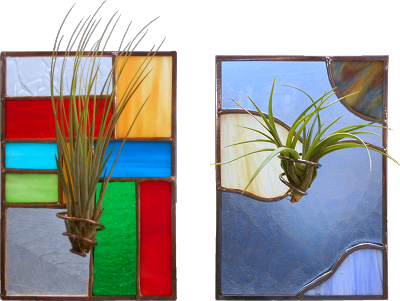 Carol put the finishing solder lines on her Peacock Window and completed it this week.  Meanwhile, we are all trying to get her to make another peacock (but much, much, much larger).   She says she wants to make one but she isn't ready yet.  Until then everyone in our Thursday morning class will  continue holding their breath until she makes that window which will turn her into a true stained glass professional!   Judging by the work she did on this, a larger version will be a piece of cake when she decides to tackle it. 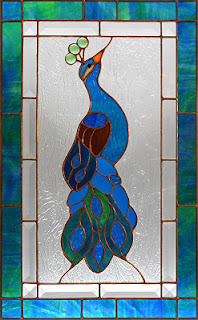 Martha's three Fleur De Lis Windows were all completed this week and she's done a great job working on a very advanced design.  Pay attention to the cuts that make up the arms of the Fleur De Lis and you will see some incredibly deep cuts.  I know that Martha is happy to see these completed because making three of anything is a mentally exhausting task. 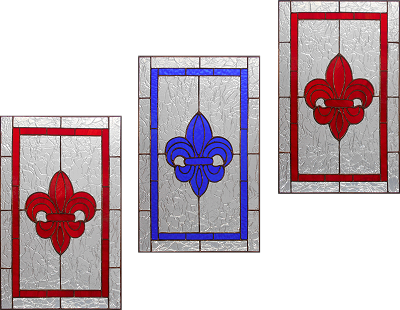 This is our newest 3D Flower Lawn Ornament and we are officially calling it the Row Flower. It's based on the Sunflower design but features petals with a lot more flow to them.  Now that I'm really looking at it it's almost a flower within a flower.   No matter, you can easily see that Rowena did a great job with it and it's sure to look great in her yard.   I'm expecting to see more of these being made soon. 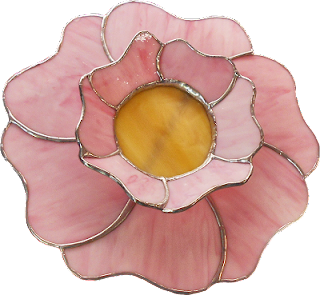 Brenda's Orange and Black Stylized Fleur De Lis Window was completed this week and there's not much more I can say about this that I haven't said before about the others that she's made.   Her curves all flow gracefully and her soldering is nothing short of impressive.  So there you have it! 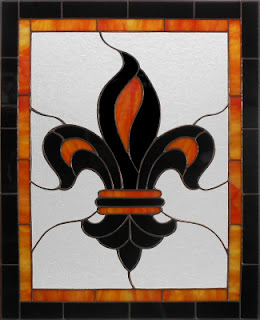 Carol also turned out this 3D Butterfly Lawn Ornament which features a lot of Van Gogh Glass (it's the deeper purplish colored glass).   Van Gogh  glass is Glue Chip class with a mirrored backing Which doesn't allow light to come through from behind but allows light to reflect from the front side to reveal it's colors.  Without flash photography this butterfly would actually look as though there were gray or black glass in it, but when the picture is taken with a flash its true beauty appears. 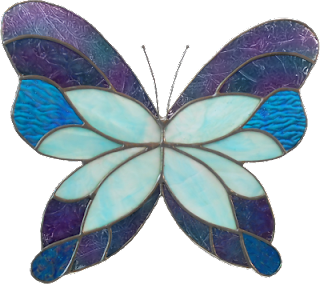 This 3D Butterfly was made by Susan D this week and although you can't see it at all it is full of curved sections that she did on her own.  This is yet another piece of her Flower Cornucopia Lawn Decoration. 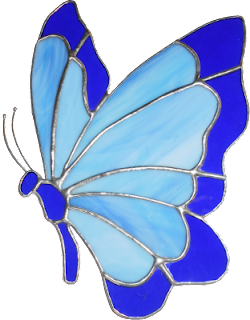 Lara's newest window is taking shape with just one class of work in on it.   This highly stylized Ballerina is set off by a distinctive use of shadowing throughout the design.   I know this is going to be one BEAUTIFUL window and since the Ballerina herself is all cut out I'm thinking that this will be finished before you know it.

Cindy is back to work on her Panel Lamp and is grinding the first panel already.  She's made a minor adjustment to the pattern that I think makes a world of difference to the overall look of the design but I'm not telling you what it is quite yet.  Below you can see how we use the same board to do multiple lamps.   Cindy's pattern has been traced vertically on the board while a lamp that Janet once worked on can be seen running horizontally across the same board. 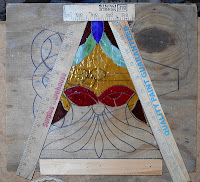 Mary has all of the glass cut out for her Assorted Birds Window and she's already moved on to the grinding process.   Before I could get over to assist her she had nine pieces ground and fitting together perfectly.   If Mary has any doubts about her abilities she can surely lay them to rest.  This is going to be beautiful. 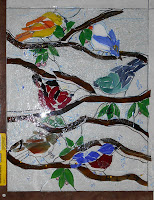 Terry got her Heron Window all ground and spent a good deal of her night wrapping pieces of glass.   This pattern has always been a favorite of mine  but Terry put her own personal spin on it by making changes here and there so she could utilize the limited amount of glass she had by increasing the amount of colors used elsewhere in the window.   This design change made things work out just right for the amount of glass that she had and the pattern holds up perfectly with the changes that she's made. 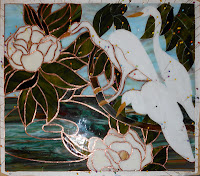 Myrt is making a new and different large suncatcher that is wholly original.  It's a Sunflower with a peace sign in the middle of it!  To make things easy she's going to assemble the piece sign and then tack that together so it can't shift about.   Once that's tacked the petals to the sunflower will be cut and things will be ready to go. 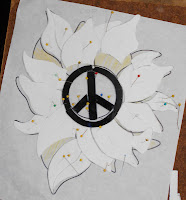 Next we have another novel window idea and this one is being made by Tasha.   It's a balloon in the shape of the letter 'J' floating in a nice summer sky.   She's still a little unsure of how the knot on the bottom of the balloon is going to work out but she'll see once she's wrapping all of the glass pieces that she's already ground (which is about 95% of her window if not more).   Next week she'll see how the lead lines will form the string and knot.

Sheri's Crane (or Heron) is coming together as the bird, the water and the leaves in the water have all been cut.  She's been marking out the grain lines onto all of her pattern pieces and is learning the rules to grain lines which we'll discuss in a Blog Tip in weeks to come. 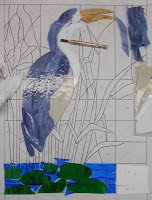 Susan D is so close to having all of the glass cut for her Spring Window that it isn't even funny.   I can't wait to help her wrap this because I love working on pieces that are thin and long (most students don't really enjoy it nearly as much as I do though!) 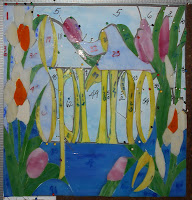 Bonnie had a lot of irons in the fire this week as she finished doing all she could on her Peacock Suncatcher and then moved along to an Angel Suncatcher.   Once that was all cut and ground she started working on a Blue Football which was also cut and ground before she left class.  Whew! 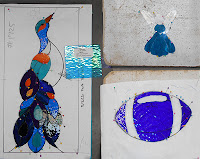 Melissa was worried that she was going to miss class this week and not be able to work on her Semper Fi Window but as luck would have it we had an opening on another night and Melissa was able to get her window ground and fitting together perfectly,  She's begun wrapping all of her glass and has taken this home with her in hopes of coming back into class next week with everything wrapped and ready to tack together.

Jeanne has one Lawn Ornament Bee ground and one more just about ready to go.  Once these are wrapped she'll start tacking them together in a way that allows the wings and the body of the bee to have a slight curve to them.  It's not a huge curve but it's VERY noticeable and makes this design really catch people's attention.

And here's yet another Butterfly that Susan D spent time working on this week.  She got this all wrapped and pretty much tacked together before she left class and even managed to put a curve on it as well.   Again, all on her own.   Me thinks the girl has it all worked out. 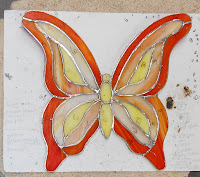 And in wrapping things up we see that Linda L has another Cardinal Suncacther all ground and ready to be wrapped.  But if you look really carefully you'll see that there are pieces to yet another Cardinal hiding out in a zip lock bag to the left of the cardinal that she has pinned to the pattern.  That means that she'll get two more of these completed when she comes back into class.

That's it for this week and I know I've promised and promised but expect some Front Page News within the next three days.