Okay, so the day is here!  Ann has completed her large (3 foot tall) Fleur De Lis Window and all of her hard work really paid off in the end.   No one ever realizes how much time and effort goes into making a large window, except for Ann.   Next up will be some considerably smaller crosses.  It's time for a less stressful project where the end is always in sight. 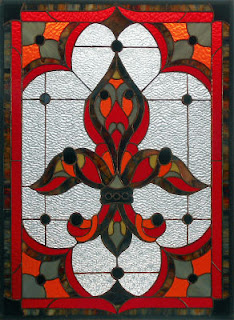 Jeanette completed her Beveled Window and the smoked gray glass rally compliments all of the bevels wonderfully.   I was happy to hear that she was able to match her glass perfectly and fix her missing piece without resorting to using a glass that was merely similar.  How elegant. 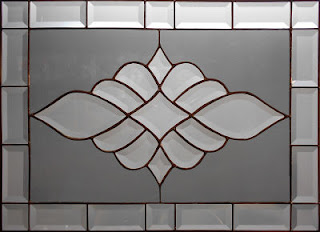 Rowena finished her Polar Bear Lawn Ornament and I knew I was going to love it.  There's a wonder in simplicity and this piece catches it.  Rowena also spent time on her Mallard Window which is nearing completion already. 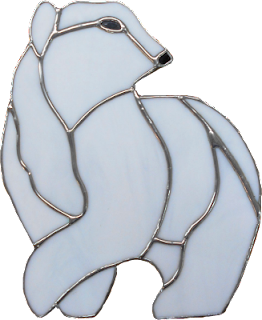 Susan D got three more flowers cut out and completed for her Flower Cornucopia (which looks NOTHING like a cornucopia at all).   She must have about 40 pieces completed for this already with more showing up each week.   I do believe that we'll be seeing her working on a Peacock soon though, perhaps as a break from flowers and insects. 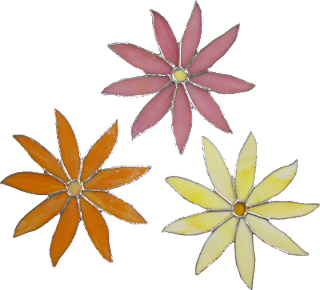 Myrt completed her second Iridized Peace Sunflower and it turned out every bit as beautifully as her first one did.  Next week we'll see Myrt move onto something else though what it is I don't know.  I love surprises. 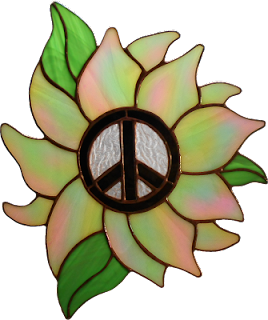 Betty  has all of the borders tacked into place on her Iris Window.  With the majority of the front side soldered already she'll be ready to flip this window by next week (if she doesn't finish it at home before hand).  I suspect this will be finished before we know it!

Bonnie dotted all of the eyes on her Birds On A Wire  (those eyes are tiny and hard to fit into place) and has officially moved on to the wrapping stage of this project.   It won't be long now.

Linda V had two of her Mickey Mouse panels cut out when we saw her last and this week she began (and finished) grinding both of these panels.  After assembling a jig to make sure that each panel lines up perfectly, Linda got to work on a grinder.  Her cutting was right on the line in most cases and by the end of the night she had two bags of glass to take home with her to wrap,  Next week she'll begin two new panels featuring a full figured Mickey!

Roxane now has three quarters of her Cross Sunburst Window wrapped which means that she'll be tacking this together when she comes back into class.  The use of a pistol grip cutter is ESSENTIAL to making a window with as many straight cuts as this one.  This is another project that I can't wait to see hanging up. 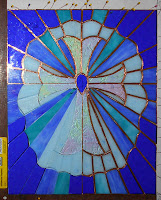 Tasha's Manolo Blahnik Window is all ground and ready for foil.   This window really looks great and the subject matter certainly makes you turn your head when you get a glimpse of it.   I can't wait to see this with some light behind it.

Jan added borders to her wedding invitation and then got a hinge put on along the top edge of the box top.  Next week she'll cut the five pieces for her box bottom and finish this wedding present.  Hopefully the next picture will show how perfectly the glass matches the invitation. 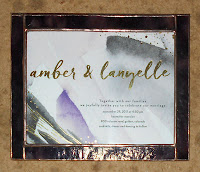 Becky S spent the night filling in the missing pieces of her own Birds On A Wire Window.  With only a few more to go and the knowledge that it only takes her a single night to solder this, I'm just about ready to say that this a completed project.

Janelle has almost all of her Seagull Window ground which impressed me immensely.  She's really caught on to the method of placing one piece on top of the other to get a line drawn on the larger piece which makes fitting so much easier.   She's taken her window home with her to foil what she has ground so she'll be ahead of the game when she comes back in. 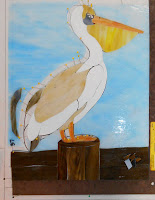 Rowena also started working on this new Fish Suncatcher that everyone on Thursday took a pattern for.  I suspect we'll be seeing a lot of these.  I also think this will be completed when we see it next week. 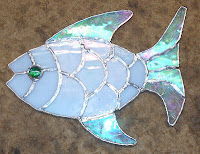 With the soldering all done on the Autumn Scene portion of her window, Barbara got to work cutting wires (she actually used refrigeration tubing solder strips) to form the majority of the Train Trestle.  As you can see,  she has a wonderful bridge that will be fleshed out a little more next week.  After that there will only be the train cars left to cut out and attach.

Carol  is making Multi Colored Fish left and right here!  She got one completed and there's another in the oven (so to speak).  These are incredibly popular pieces for using up scrap glass which essentially negates the price of making these fish.   Yep, I said it-- Carol's cheap!  lol  (Not at all!)

Linda F  had a busy day as she got all but the final 5 pieces ground for her Flowerpot Window.   We're going to cut one of the largest sections into five distinct pieces once this all fits together so that the lead lines will form the stems of one of the flowers.   Doing it this way not only ensures a perfect fit but allows the background to maintain its pattern as well.

Brenda got the stars fired onto the blue glass in her American Flag Window and they turned out beautiful.   She's tacked this all together and then began soldering the front side of this because she accidentally left her border glass at home! 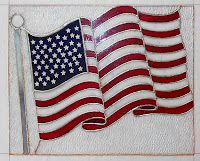 Martha has returned from her two week Stained Glass Abstinence and spent her time grinding the remaining pieces to her Deer Window.   There's only one piece left to grind and then she'll wrap and tack this together in preparation for the border(s) to be cut. 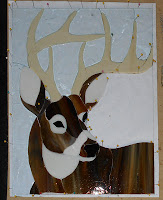 After much pondering Melissa thinks that she may very well finish this window off with a double border.   Since the corners are curved and the border that was drawn on the pattern is very wide we're thinking about splitting it into two section.  Before that happens the center section needs to be ground and tacked together which is exactly what Melissa started this week.  I must say that the grinding is going VERY well. 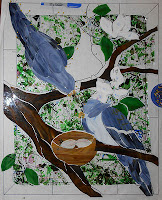 Linda L spent her time soldering her Address Window and managed to get the front side 100% completed.  We carefully flipped this long window around so its back side was facing up and then Linda got the numbers on the back side soldered.  I strongly suspect that this will be completed upon her return.

Cindy has her third Lamp Panel completed (which includes the soldering process) and the fourth panel is all cut out and ready to be ground.  Let me tell you that these panels all fit together perfectly which means that the lamp will assemble without a hitch at all. 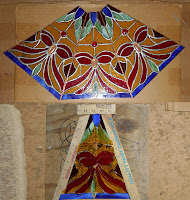 Mary got all of her Berries cut into place for her Bird Window and finished wrapping all of her glass.   She's going to change out a few of the bird beaks but we'll do that AFTER this is tacked together.  Mary will be adding a double border to this window, the first being the blue glass that you see in the picture.  We'll see the work on that begin when Mary returns. 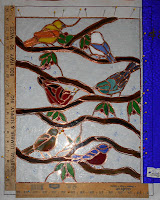 Tracey had to cut her time with us short this week buy it didn't stop her from cutting out all of the deer fur on her Deer Window.  Next week it's ANTLER TIME! 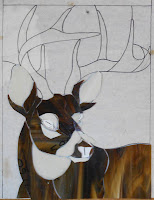 Susan R completed her newest Rose Lawn Ornament which I've named The Yellow Rose Of Texas.   Excellent work all around. 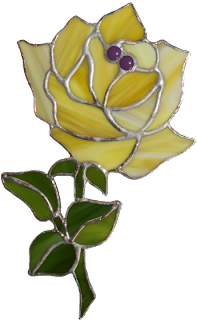 Jeanne has begun making a pair of boxes and she's got all but the bottom pieces cut out, skimmed and ready to wrap.  She's using the same textured clear glass that she used for her last box which means that these will turn out beautifully indeed.

Terry drew up this miniature pattern and then had me print it out in a larger format to work on as a window.   I didn't get a picture of the actual pattern that she'll be working on but I do have the scan of her drawing.  Here it is!

And lastly, Fran is back!  We haven't seen Fran in a few years but she's back in action with us as a full time student who spent her first class designing a fantastically detailed Fish Window.   I didn't get a picture of the pattern because it was only sketched out in pencil (which never shows in pictures) but you'll get a look at it when she comes back in next week and it's been inked over with a Sharpie to reveal its final form.

Posted by Bayou Salé GlassWorks at 8:57 AM