OMG, I Said From The Waist UP!

I have another quick and simple tip this week which involves the foiling of bevels.   If you do as I do and look through the bevel to see if your foil is centered correctly, make sure you look through the flat side of the bevel.  It really makes a difference in getting your foil properly aligned which is so very important when foiling clear glass.   Never forget that EVERY foiling mistake shows on a clear pieces.

Well, it's officially completed--  here's Barbara H's Autumn Train Scene in its final form.  Now that everything has been put into place you can easily see how the sum of all of it's parts make the scene come alive.  Now you can see the mountain on the left that the train is emerging from  and how the trestle disappears into the trees on the right side of the window.  I love it and think it turned out even better than I can put down in words. 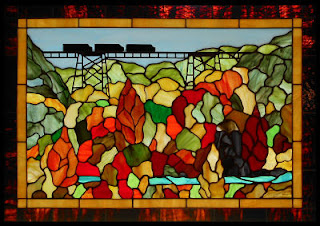 Here's a closeup of the train trestle and the silhouetted train.   I think her husband is REALLY going to appreciate this piece as it takes him back to a time and place he loved.

Betty has completed her Iris Window which is has become one of my favorite patterns.   This design flows so wonderfully and her color choices are perfection. I've even changed my mind about the glass she used for her background as it's always been one of my least favorite colors, but it works beautifully for this. 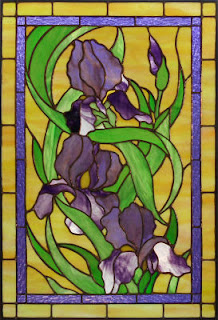 Then Linda L put the finishing touches on her Address Window by soldering the back side of it when she came in this week.  After slowing down, her lines changed from having bumps in them to completely smooth.  Once she hit her first few lines with a second pass her soldering was pristine.    Now that she's made this I can honestly say that I've got her number down.

Carol has been making large Fish suncatchers for the past two weeks and now she's assembled three of them into a hanging school of fish which are obviously tropical because of their vibrant colors.   Kudos to Carol for chaining them up all by herself!

Meanwhile, up in the air we have a flock of Birds On A Wire that Bonnie completed this week.  Everyone loves this pattern and Bonnie slyly smiled when she saw these hanging with light behind them and said, "I may just make another one of these."

Rowena completed two large suncatchers all on her own with the beautiful Tiger Head being a Lawn Ornament.   She even attached the stake herself and did a great job doing it so pretty soon Rowena won't be needing me anymore.  :-(  I think her fish looks great also and I love how the light somehow managed to catch the iridized colors in the tail and fins 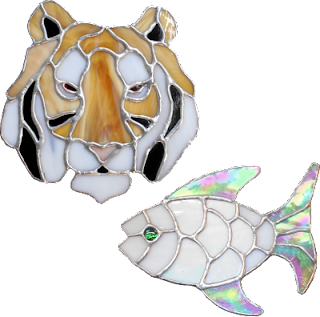 Betty also worked on her Day Lilly Oval and is ready to begin grinding it.   Two different blues have been used in the border sections of this window but they are hard to differentiate while the glass is resting on white paper.  When this is lit up you will easily see the variations in texture and color between the two blues.  Yep, this is another pattern that I love.

Well guess who's back?   Mary Grace is back in action and she's got almost all of this Geranium Window all cut out and ready to be ground.   She left the center pattern pieces of the flower at home but that didn't stop her from getting everything else cut out.  It was good to see Mary Grace again and it's nice to see her working on a complex window like this to get back into the groove of things.  As for what kind of flower this is I must say that I'm guessing and that I'm not very good identifying flowers so I may have the name wrong. 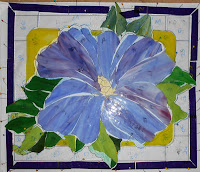 Last week Terry got her full sized pattern for a  Blue Flowing Flowers Window and this week she got all of the glass cut out for it.   This complex window is all ready for a date with the grinder after Terry began working on it in just one class.  I think this is going to be stunning.

Meanwhile, Lara has the lion's share of her grinding completed on her African Woman Window but that head wrap has a lot of pieces which are intricate and demanding.   Still, Lara's speed is amazing as she works quickly and efficiently on this beautifully detailed window.

Jeannette only had a bevel cluster wrapped when she walked into the door and after we straightened out the pattern so that the bevel was symmetrical she tacked it together and then got her beveled border assembled.   She cut out a piece of background glass the size of her opening then cut out her background glass.   This is ready for solder as everything else was officially completed in just one class.  Amazing.

Becky S has all of her glass cut and ground and she's now begun wrapping her second Birds On A Wire Panel.   It's colorful, it's complex, and it's another winner in my book.  Becky's attention to detail ensured that none of the birds had twisted faces and that everything lines up symmetrically.  That's very important in any window that has faces in it.

Mary got her Bird Window all tacked together this week and even got the inner border cut, ground, and wrapped.   She'll attach this blue border when she comes back in and then get her final border added.   Once that's done she'll begin soldering (which is actually easier on windows with small pieces-- I guess it all balances out in the end).   This is almost complete now! 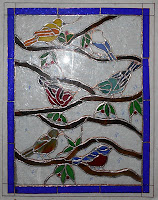 Sheri has just about all but a few fill-in pieces to her Crane Window ground and ready for foil.   That means that the hardest part of this is essentially done and she'll be able to breath a sigh of relief and take a bit of a break while she's wrapping all of these pieces. 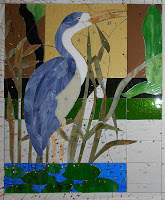 Myrt has started a Fleur De Lis Window that we haven't seen made in a long time now.  The Fleur De Lis itself is easy enough in this design-- it's the ribbon border that makes this pattern so tricky.  You'll get to see more of that when Myrt returns. 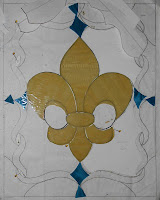 Shelley finished her cutting and grinding and is now working on wrapping her Humming Bird and Flower.  Once they are tacked together she will cut her background from one piece of glass and then be ready for a border. 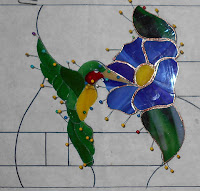 This looks like a good place to put these.  Odd?  Most definitely so.  They had a very full and 'thick' taste about them.  Thanks for taking us to new places, Carol!   Also, I'm sorry I didn't make that half a mustache more 'salt and pepper' colored-- my bad! 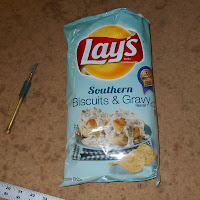 Linda V wrapped all of the pieces to her pair of Mickey Mouse panels while she was at home and was able to tack them together as well as getting them soldered while she was in class.   Her first panel went well but her second panel is where she really shinned with her soldering.  I think she's already got the hang of it!

Susan R began work on a 3D Hummingbird and is set to begin assembling it when she comes back in.   I think we should consider this project finished because she'll surely be starting something new when she returns. 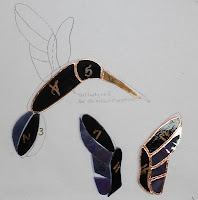 Brenda got the inner border for her American Flag Window cut, ground, and wrapped, but she had left the glass for her final border at home so she was unable to cut it.   Nonetheless, this window will be ready for soldering when she returns next week and gets that final clear border attached. 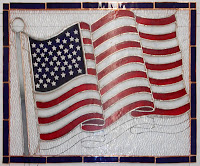 Martha got the final background piece for her Deer Window ground into place and has started wrapping all of her pieces.   Everything looks great on this and this deer's face lines up perfectly.  The wrapping (although hard to see in the picture) is almost complete on this so a border will surely happen next week. 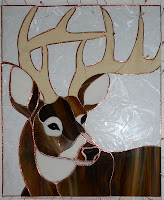 Linda got her final pieces cut for her Flower Pot Window and even got it all tacked together.   Her thin accent color border has also been cut and when she returns she'll get the final border attached.   She's free to start soldering the front side of this so it will be interesting to see what she manages to accomplish while she's at home.  It's been hot and rainy so that may very well slow her down, but you never know.

Cindy now has a fourth panel for her six sided Panel Lamp ground and she's begun wrapping all of these pieces.  Up next, Panel Number Five! 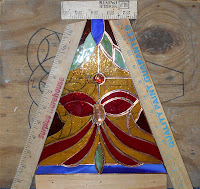 Melissa has gotten her grinding skills under control as she is now getting even the toughest pieces to fit perfectly all on her own.  Learning to place a piece on top of another piece is the key to quick and easy grinding.  Melissa thoroughly understands this and it shows in her work.

Rowena also got her two borders and a brass channel attached to her Mallard window which means that she only has the back side of this left to solder before she completes it.   Since she loves to solder at home this may be completed when she returns but as I've said earlier, with this heat wave we've been having not everything is possible!  Even if she can't solder at home there's still a very good chance this will still be finished when she returns. 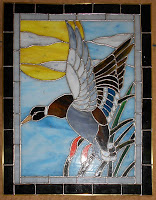 Next we have Tracey's version of the Deer Window and she's opted to go with a blue sky for her background.  When she traced out her pattern pieces she laid them out on the glass the way they fit on the pattern so the pattern of the glass lines up to form a natural sky.   Right now it's hard to see but once this is ground the sky will look very life like. 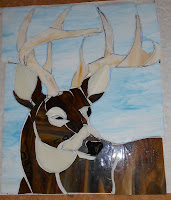 Bonnie has started working on three small Angels which she has all cut out and ground already.  The picture to the right shows how she has all three stacked on top of one another.

And lastly we have Ann who has five different Crosses traced out onto her various pieces of scrap glass.   Next week she'll begin cutting and we'll get to see these two different sized crosses take shape. 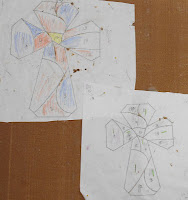 We're a little early with this post because we'll be headed off to see the eclipse this weekend and won't be arriving back home until early Tuesday morning (unless REALLY heavy traffic comes into play).    It's a little odd having this completed on Friday afternoon but it's definitely a good feeling!  I will leave you all with a little advice:  Don't look at the eclipse without having a good pair of eclipse glasses on!  See you all next week.