I'd Rather Be Crude Than A Prude

This week I need to mention something very simple and VERY important.  Lately we've been seeing students who have trouble grinding a piece to fit into place so they just pin it and move along figuring that they will fix it later.   This is a terrible idea because it means that once it IS fixed and fits into place properly everything else gets shifted out of place.    Just remember that you can't move along to another piece until the one you are working on fits correctly.  If you're having problems fitting a piece of glass then walk away from your project for 5 (or more) minutes and then come back to it.   Things generally work out better once your mind is cleared and then you can move along.

Okay, so wow-- I just love everything about this window!   Tasha's Puss and Heels project has now officially been completed and those red high heels really steal the show.   The border glass is perfection and the only real color comes from the shoes, the cat's nose and his eyes.  Let's go straight to number one! 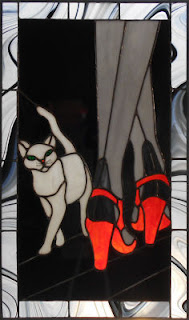 Linda completed her Flower Pot Window and it also looks just as great as I thought it would.  I must say that the purple flowers that she was so intent on re-cutting look flawless!  With her soldering being spot this window is another feather in Linda F's stained glass hat.  Also, kudos to her for NOT being boring and making all the flower pots the same color.   The variety of colors is really what makes this window. 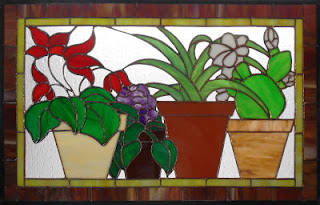 Betty completed her Daylily Oval Window and it turned out to be a stunning indeed.   She went ahead and added thin wires with tiny black beads attached to the end to form the flowers stamen which is that little extra effort that may not be obvious at first but which makes the window stick out in your mind.  Little things mean a lot, indeed!  Staying true to form Betty has already begun working her second version of this window already.

Jeannette put the finishing touches on her Shrimp Window and the wire Antennas the flow and curve so gracefully over the shrimp really lend an air of authenticity to the finished window.  Rather than painting on an eye, Jeannette went the extra distance and cut the tiniest piece of black glass and then ground it into place.   The end result is perfect. Great work! 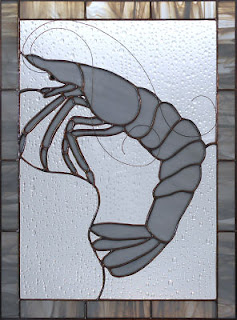 I knew that Rowena's Zebra head was going to be intense but even I underestimated how many little pieces this would involve.   Our students have really been outdoing themselves lately and Rowena is no exception because when this was completed she went ahead and painted some black stripes  on the upper nose where we couldn't fit any glass.   There's certainly no mistaking what this animal is! 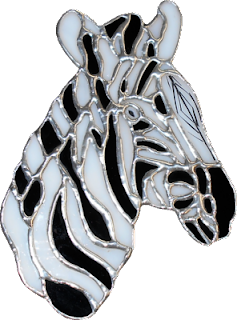 Barbara's Tulip Window is coming together now that she's actually cutting glass for it.  I've seen her color choices for her Tulips and I think that this will be one spectacular window when it's completed.  Subtle is my middle name and I think it may be Barbara's as well as you will come to see in the weeks ahead.

Becky S has started her Geometric Window and by cutting four of each piece at a time she's getting a lot done quickly on this beautiful design.   Becky will also be incorporating some lead covered pieces in this-- I think it's becoming a trademark of hers. 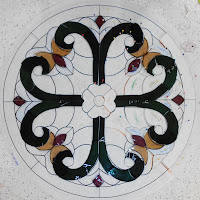 Melissa's Birds Window looks great and the color that she picked for her border is perfect! I will admit that I wasn't thrilled with the pink that she'd originally picked but she was always second guessing it so I said nothing to see if she was going to use it or not.  In the end she went with a much better fitting single green border.  Oh, and trust me-- this window is MUCH bigger than what the picture would have you believe. 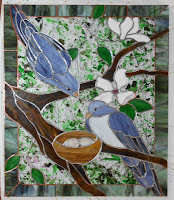 Mary Grace has all of her Hibiscus Flower ground and fitting into place so she's moved along to the foiling part of this windows construction.  She plans on adding another border once it gets tacked together but I believe we'll be changing three small pieces of glass before we do that.   I won't tell you which ones but I'll point them out once they've been changed. 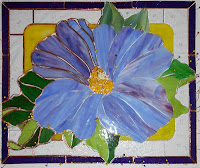 Next we have Betty's second Daylily Window.   It's the same design as the one she completed at the top of this post but with completely different colors.  As always, this is looking like it will be another stand out window for her.

When we last saw Tracey's Deer Window she had taken it home with her in hopes of grinding it during the week.  When she came into class she was a little concerned about how it looked but I have got to say that it looks absolutely mah-velous!   What a beautiful job she did on this all on her own.   She lost her deer's nose while it was in transit but a few days later I found it in the driveway so this will be whole again soon. 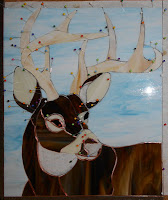 Bonnie resumed work on her Glob Tree and has it all cut, ground, and tacked together.   Bonnie made short work of this and quickly understood how to cut the sky and the tree to fit the irregular bottom edge of the treetop without having to ask for help at all.  This is all ready for solder. 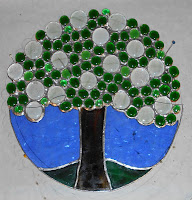 Jan is making stunning progress on her Sunburst Window.   Since this is going to be bordered with bevels Jan has taken them home to wrap so she can tack them together when she comes back in.   Once the beveled border is assembled she'll grind these Sunburst pieces to fit within the beveled frame to ensure a seamless fit.

After trying our numerous pieces of glass for her double border, Lara found a perfect fit with this Baroque Orange Glass.   I will say that it works perfectly with her African Woman.  She'll be following this up with a thicker green border but we can't show you what that will look like until we return next week.

We had a special guest student this week-- Since Roxane wasn't coming in she asked if Angie could take her place and since Angie has taken about a dozen Weekend Workshops with us we said YES!   Angie will be here again next week when she should be able to finish this beautiful beveled Pineapple Window. 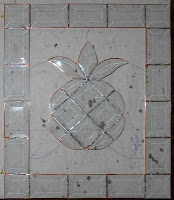 Myrt has the ribbons cut for her Fancy Fleur De Lis Window and is moving at a nice steady pace. There are only background pieces left to cut  and we'll see her start that when she comes back in on Tuesday. 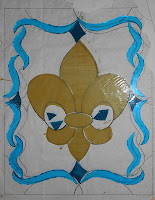 Janelle has begun soldering her Pelican Window after getting her double border and brass channel attached.  She started her soldering by doing a single side of each of the thinnest pieces that make up this beautiful window.   We always like to give the thin pieces a chance to cool before hitting the other side with hot solder so the glass won't crack.   Janelle will resume soldering when she comes back in. 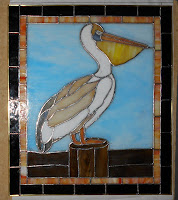 Martha has both of her borders cut for her Deer Window with the last one just needing to be wrapped and tacked into place.   I do believe that Martha will begin soldering this window when she returns next week.   This green glass is proving to be quite popular now. 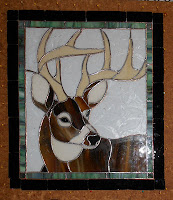 Terry got her borders cut, wrapped, and tacked into place this week on her Blue Flower Window.  I do believe this was a labor of love for her because she certainly flew through the creation of this piece.   I can't wait to see what's next for Terry, but more importantly I can't wait to see this hanging with some light behind it.

Linda L has the front side of her Beveled Fleur De Lis Window all soldered and has turned it over and begun working on the back side of it.   This was a quick and easy window for her and she'll be moving along to a new project when we see her next week. 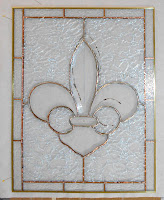 With the front side of her Bird Window all soldered Mary has moved on to the back of this complex project.   She's really gotten a handle on the soldering process and now completely understands that the lead will form a bead all on it's own of you just allow it to completely melt.   This could very well be completed when we see it again! 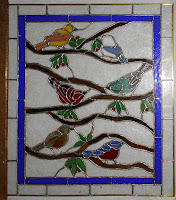 I must say that Susan R's Welcome Window is taking shape quickly!  We're going to re-work the eclipse once this is all ground and fitting together because I think there's an easy way to get this looking much more realistic.  With just a butterfly to cut and a few fill-in pieces I'd say that Susan will be grinding this before you know it.

Brenda pretty much completed her American Flag Window having gotten all of the soldering done and a channel and two hooks tacked into place.   The only thing left to do is wash and color this.  Once that's done she'll be able to touch up the white stars with a little paint to smooth them out and then this will be completed. 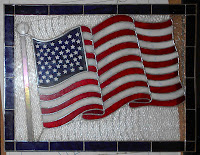 Rowena has everything but the final border tacked into place on her Long Tall Iris Window.  For her border she used the same yellow glass that she used in the flower petals.  I always like to go a little wild with the flower pot on this pattern and Rowena found the perfect glass to do just that.  This will surely be completed when Rowena returns.

Sheri finished tacking her Heron Window at home and has moved along to the soldering process.   We were going to add the border and channel but she wasn't able to bring in the frame that will surround this and I want to make sure our measurements are correct  before cutting those border pieces.   Hopefully we'll have the frame in the shop with us when Sheri returns. 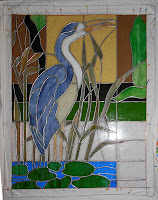 Tasha began working on a large Elephant Window after completing her Puss and Heels Window.  When Rowena made this the pattern fit on a standard sized piece of paper but we've enlarged it a bit and had to print out the elephant's right ear onto another piece of paper and then tape them together. 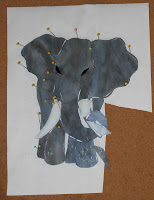 Susan D's been as busy as a bee when it comes to working on her second Flower Cornucopia.   In fact, she's cut out about 70 leaves this week alone! That's a lot of cutting and it's soon to be a lot of grinding.  The good news is that nothing has to fit together so she'll be able to just smooth these out on the grinder and then be done with them. 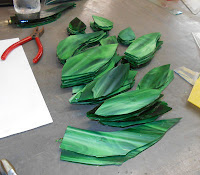 It turns out that Fran re-drew a good portion of her Fish Window while she's been home and when she came in we 'inked' it all in with a Sharpie Marker to cement this as her final pattern.  This week she traced it all out onto poster board and got all of those paper pattern pieces cut out and separated into baggies for easy tracing.  That means that she'll be cutting glass when she comes back in. 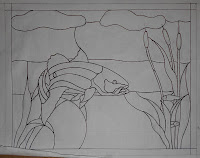 What a week!   We've had a lot accomplished and there are new windows already about to be started already when we return next week.  Even I don't know what some of those projects are so it will be a surprise to you and I both when we meet again next week, same bat time, same bat channel!