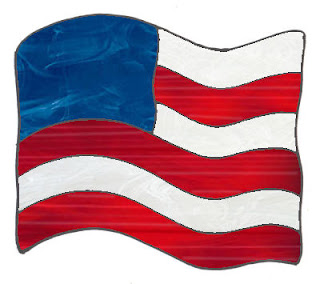 Here you can see that we've avoided using any straight lines in the red stripes which now appear to have a real ripple throughout them.   Straight lines are never your friend when it comes to making stained glass.  It's like trying painting a rainbow with just three colors of paint. 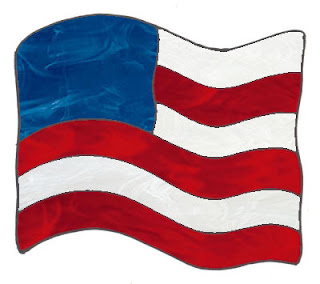 Sheri finished her Dragonfly Suncatcher this week and a picture just can't show you how delicate this truly looks in person. Filling in the background with a clear textured glass would only add weight and an element of 'clunkiness' to this beautiful design. 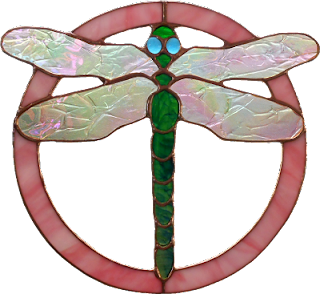 Bonnie  finished her Pansy Flower and the pair of leaves that go along with it.  This will become part of her version of the Flower Cornucopia.   She's got a lot accomplished already and these are fun to make because you get to see so much progress with each completed suncatcher. 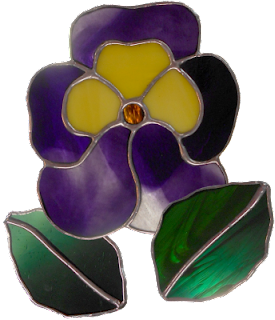 Jeannette  has really burst out of the starting gate with her new Shrimp window because it's ready for solder after just two weeks of work.  When this is completed she'll be adding long wire antennas to the shrimp for an air of realism.   And we may very well see that happen next week. 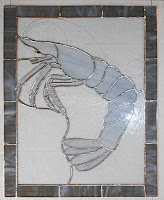 Rowena started working on a new Long Tall Iris Window and I must say that her cutting on the petals of this Iris really impressed me.   However, Rowena had cut apart her paper pattern without remembering to mark grain lines on the background pieces.  This made things a little tricky when trying to distinguish the front from the back of the paper pattern pieces.   Then she had to make sure that the grain ran up and down rather than the standard left to right because she's using a background glass that looks like rain.   In the end she made out just fine after she re-positioning the pattern pieces and marking them with grain lines.

Carol  drew up this Underwriters Laboratories pattern and got everything cut, ground, wrapped and tacked before calling it a day.  Now that's fast and accurate work and there's no doubt in my mind that this will be completed when she returns.  She can probably sell it as a University Of Louisiana Window if she wants! 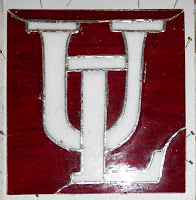 Then there's Roxane's Cross Sunburst Window which is all tacked together.  She has a channel around the edges and she's already begun soldering it.   I really want to see this with some light behind it because even though I think it looks great now I think it's going to be a real show stopper when it's back lit. 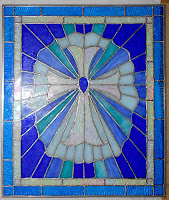 Speaking of show stoppers, Lara's African Woman has been tacked together and is now getting its background glass cut out.   You can't see it in the picture below but the texture on the glass is PERFECT for the subject matter.   With just four more pieces left to cut this will surely get some colorful borders cut when we see it again. 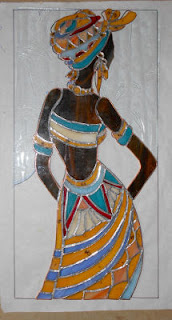 Tasha's Puss and Heels Window is really turning heads here.   This week she got all of her pieces tacked together and her border cut and attached.  Tasha took this home to solder and I have no doubt that this beautiful window will be finished when Tasha comes back in.

Melissa got almost all of her Two Birds Window wrapped while she was home last week so when she came in she wrapped the pieces that still needed to be foiled and then tacked everything together.   Next up for this window is a border and we're still not quite sure what's going to happen there so next week will be fun indeed!  Opinions will abound! 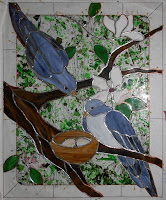 After completing her Pansy, Bonnie started working on a Tree Window that is made  mostly of the round glass globs that we use for butterfly heads.  In the top image you can see how she placed all of the globs and then in the lower image you can see how she filled in all the spaces between the globs with solder.  We're going to add a tree trunk, a sky and some grass underneath  this rounded panel when Bonnie returns.

Sheri has all of her Heron Window wrapped after re-grinding and re-aligning some of her pieces.   No matter how well you cut and how much wiggle room you leave between your pieces you almost always have to re-grind pieces here and there to accommodate the extra width that all that foil adds to the window.  Sheri has begun to tack this window as you can see along the left side.   She hopes to get the front side soldered while at home this week and that means that a border will go on next week. 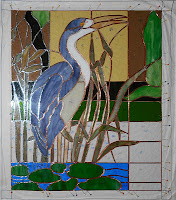 Becky S started a new project this week and it is going to be a much larger version of the rounded Geometric Window that Cindy loves to make.  Becky has traced and cut out paper pattern pieces for only one quarter of the design because the design itself repeats four times.   She'll just trace out 4 of every piece making things easier to keep track of since she'll only be dealing with 35 pattern pieces rather than 140!

Linda V has begun work on the final two panels of her Mickey Mouse Lamp.   Since she had no problems at all with the first two panels we've decided to go the full 9 yards and use the more difficult full bodied Mickey for the last two sections.   Linda already has her pattern pieces traced out onto glass and will begin cutting when she returns.

And that's it here.  We had a short week due to all the drama that Hurricane Harvey brought to us here in Louisiana but I'm happy to say that we all made out just fine.   Our hearts are with Texas though and now we have Irma out there headed our way.   The excitement never ends does it?