Since we missed out on a week of classes due to an Easter vacation and I'm already a week late with this we're foregoing the tip of the week and just jumping right in to what our students are making.   Here goes!

Terry's Plate Window is complete and the cobalt blue glass that she's used for the background really highlights the cut glass effect of the four plates.   Rather than leaving the center blank Terry went ahead and incorporated a small round bevel to relieve the amount of deep blue in the center.  Trust me when I say that this window absolutely sparkles in the sunlight. 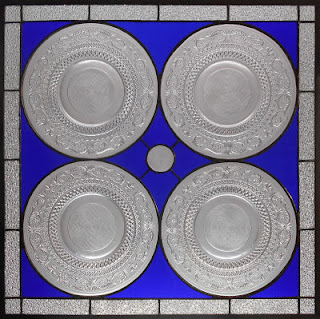 Linda L's Ballerinas are easily among the most charming suncatchers that we've ever seen.  She actually made 5 of these and although the wire work on them is extensive, the end results are incredible.   The little wire hair pieces are cleverly disguised braces that keep these suncatchers from pulling apart at the head.   When it comes to suncatchers it's very important for the finished piece to be structurally sound and the best way to do this is to add bracing that is disguised and that's what Linda has done here.   She also made another beautiful Cardinal Suncatcher so it's easy to see that Linda has been keeping busy! 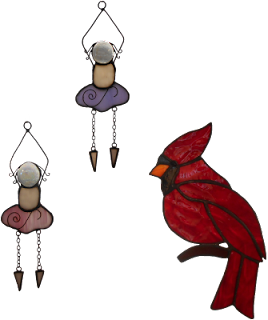 Linda F put the finishing solder bead on her Texas Star Window but before she did that she made a little alteration on it.  When she came in she didn't like how thick the outer border looked so the first thing she did was decide on a new size.  Since she was trimming it by one quarter of an inch we decided to try to trim the existing pieces with the strip cutter.    Sure enough, all the pieces trimmed down perfectly and then Linda skimmed and wrapped them before applying the final solder bead.  And the end result is perfection! 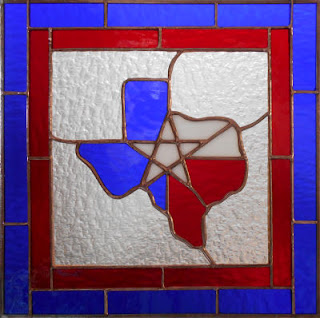 Cindy worked on a few Dress Suncatchers and this is one of them.   I just love the wire work on these-- the hanger especially, is what really makes everyone ooh and aah abut these dresses!

After soldering her project, Tracey completed her Cardinal Window and decided to color it using black patina.  She was prepared to do this from the beginning so she made sure that all of her clear background pieces were wrapped with black backed foil.  This makes the back of the foil (which is visible through clear glass) blend in with the the lead after it's been colored.   After applying the patina Tracy waited the 45 minutes for the black color to 'set' and then washed and waxed her window.  The end result is stunning, don't you think? 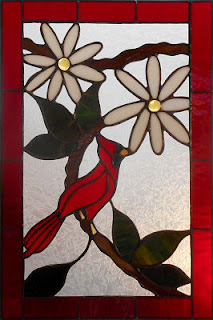 Myrt's Ribbon Bordered Fleur De Lis Window was finished last week and she's done a wonderful job on it (as always).  The tiniest pieces of background glass almost hidden within the ribbons didn't scare her at all and she tackled them with an ease and speed that astounded even me.   Many students look at me and say, "I'm supposed to cut THAT small piece???!!!"  The truth of the matter is that small pieces are some of the easiest to cut and take far less time to cut than larger pieces.   Myrt proved that with the 8 tiny pieces that she knocked out in about a minute. 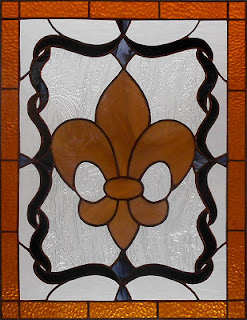 Beth completed her first two Cross Suncatchers and as you'll see a little later on in this post she's started a third.  These two offered little challenge as she cut, ground, wrapped and soldered them easily.  She's concerned that her work isn't up to par but I think she's doing just fine.  Looking at these two crosses wouldn't you agree? 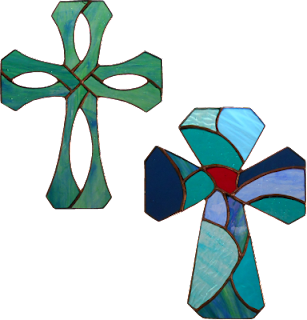 Rowena worked on numerous projects this week and even managed to complete this beautiful pink cross along with a very patriotic Modern Art Suncatcher. You can always make a safe bet that Rowena is working on a stained glass project or two... or three! 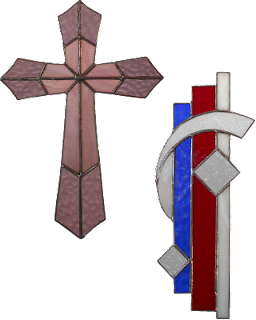 This is Betty's first rendition of the Stylized Cross and I believe I heard something about her wanting to make a half dozen of them.   One thing is sure-- she says she loves making these so they should go quickly for her.  Keep your eyes peeled for more of these from Betty over the weeks to come. 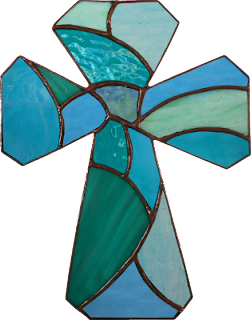 Beth also worked on a new cross design this week and discovered that smaller projects are among the hardest to do.   That said, she's still making this cross with multiple small pieces.   I think its GREAT that she isn't backing down because every project that tests her abilities will improve her talents tenfold.   Staying within your comfort zone rewards you with very little which is why they say, "You've got to risk it for the biscuit!"

Betty resumed work on her LSU Window with tiger paws and she's doing just fine with it.  For some reason she insists that it's difficult but you can't tell that by looking at her work or by the speed that she's maintained while making it.   I think she just has pawphobia.  Also, she's working on a Stylized cross which is turning out to be one VERY popular pattern.

HEY! Jeannette is back!   Well, sort of.   Nevertheless, she was in this week and it was great to have her return to the fold.  She started a beveled window and got everything but the final border cut, ground and tacked together which is is no easy feat.   Although a lot has happened to her in the months since we've seen her last she's lost none of her stained glass abilities.  I'm sure that she'll finish this window when she gets to come back in which will hopefully be soon.

Rowena started this Heron Window while she was in class this week after knocking out those two suncatchers that you saw earlier on in this post.   The speed and accuracy of her work is astounding because there is only one piece left in this pattern for her to cut out.   This is a pattern that our new students start making which usually takes five weeks to complete.  Rowena has essentially cut it all out in less than 3 hours.  And just look at that fit! 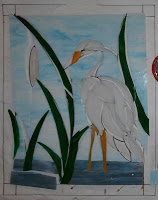 Susan R's Pelican was completed but for some reason the directions that came with the pattern did NOT work out.  Instead of wings that flap this pelican had wings that hung straight down.   The directions contradicted the illustrations so it's just a matter of time until I figure out what's wrong here but my first thought is that the hooks on the wings are far too close to the body.   I hope to have this worked out shortly and when we get it I'll share the end results. 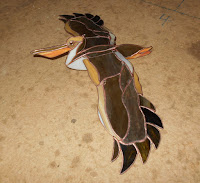 Mimi's grinding is moving along wonderfully.  She's already fitting things together perfectly and getting her curves to flow with a grace and elegance that this window requires.  She's taken pieces home to work with over the Easter Weekend so i can't wait to see what she comes back in with! 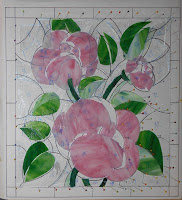 Mary Grace spend her day grinding all of the pieces that she spent the last four weeks cutting out.   She's moving along at a nice pace on this LARGE project and although she'll be spending a few more weeks grinding this she'll see that slow and steady is the best way to win the stained glass race. 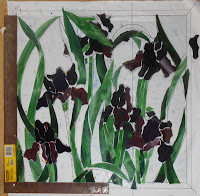 Melissa resumed the grinding on her Geometric Window and is surely making great progress.  She understands that precision is of the utmost importance on a window like this but she's no longer working on pieces where the human eye can see slight irregularities so she can be a little more lax here.  And when she looked at the picture that this window was inspired from she was shocked at how imperfect it was.   That said, I know that HER window is going to be perfect because the worst of it is over with now. 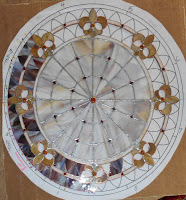 Shelley has the border attached to her Chef Window and it's just about ready to get some solder on its back side.   The channel has been tacked around the edges and once the second side is soldered she'll add some wires and a few dabs of paint to complete this masterpiece.  I have no doubt that Shelley will be working on something new soon. Terry has started a new large Angel Suncatcher and she's again improved on the aesthetics of the design.    She, like me, is always finding ways to improve things as she works on the next version of it.  I have no doubt that we'll see this completed next week. 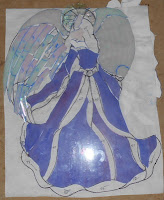 Cindy's Birds on a Wire are REALLY taking shape as she's now got everything cut, ground and almost completely wrapped.  These will be done before you know it (which probably means next week!) 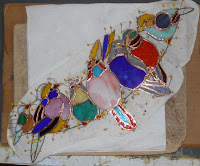 Lara has been busy soldering her Indian Headdress Window and the front side looks fantastic.   She's taken it along home with her and hopefully got the second side finished during the Easter week that we had off.  I know this will be finished within the next two weeks and I can't wait to see this with some light behind it. 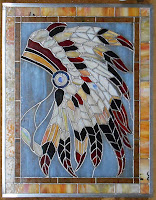 Susan D now has the background all cut out for her peacock window.   It's amazing how one little change can  affect things and in this case the change to curved corner bevels forced Susan to redrawn her background pattern pieces.   It was easy enough to do, just a bit confusing since we didn't move the peacock onto a fresh piece of paper.  Nonetheless,  the pattern was successfully redrawn and cut out in glass before she left class.   And I love how she never wavered by suggesting that we "just do what was originally drawn."

Martha spent her class working on wrapping all of the pieces to her Deer Head Window.   She won't be joining us next week because she's about to embark upon a cruse with her family.  We hope she has a great time while we're all slaving away working on glass next week!

Roy came in and wrapped all of his Hummingbird Circle and then tacked it together.  I thought we might be able to curve a small zinc channel to fit this window so we took a chance and lucked out when it fit (after a second go at it).   With just a little soldering left to go on the back side and some hooks to add to this I'll say that this project will be completed when we next see it. 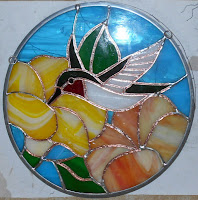 After completing her Cardinal Window Tracey decided to start something small before getting to work on a second Cardinal.   She ended up picking this Sunflower Suncatcher which she will be surrounding in glass to turn it into a small panel.  As you can see, she has most of the work done already! 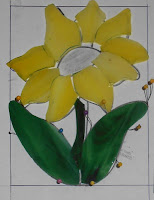 And that about brings us back up to date!  Look for a new post next week which will include another tip of the week.  See you then.