Before we hop into things I'm going to mention that we have a Fusing Workshop scheduled for next month with just two openings still available in it.  The dates are May 19th and 20th and classes run from 9am until approximately 4pm (depending on how quickly things get accomplished).   By the end of the second day 5 projects will have been assembled.   Some will be available to take home on the 20th with the others being ready the following weekend after they spend another night or two in the kiln.   If you are interested give Russ a call at 337-350-0244 to reserve yourself a spot.  Below are an example of some of the projects that you will make in the workshop. 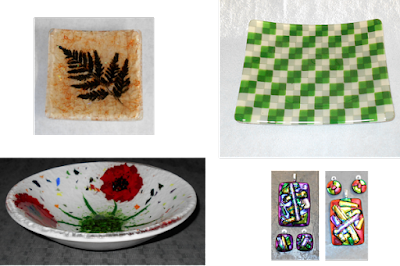 OK then, I have to say that Lara's Indian Headdress Window has been a very popular window among our students.   Students are always asking if it's in the shop so they can see it in person and they're always disappointed when I tell them that Lara has it at home with her.   Now we get to see it 100% completed and it's another show stopper.  Lara always manages to make make intricate and unique windows and this is surely no exception.  I think that this is nothing short of stunning. 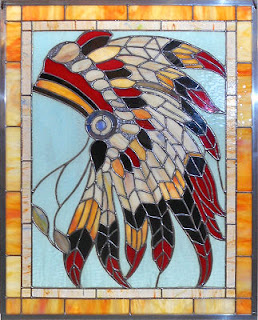 I wish I could show you how the wings on this Pelican flap but a static picture just can't do it justice.  Actually, I must confess that we I ended up giving up and soldering the wings onto this Pelican's body so they don't move at all.   Yes, I have to admit defeat because even though the instructions for this project were followed perfectly (and gone over by three different people) the wings would not flap.   It certainly didn't help that the illustrations didn't match the written instructions and that there was even one wire that was attach to the head and then never instructed where to attach it from there.   Since Susan R didn't realize that the wings were supposed to flap she was more than content having them permanently affixed to the body.  Even though the wings don't flap I must say that in the end it still is an incredibly nice piece of work that Susan made flawlessly. 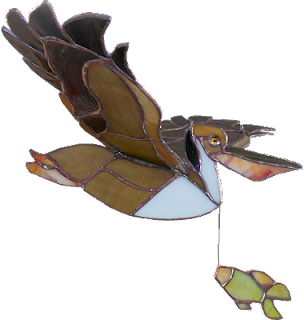 Next up we have Rowena's Heron Window which is pure perfection.   From the cutting to the fitting, to the soldering, there is not a piece out of place in this.   Her choice of border colors compliments the subject flawlessly and adds to the window without stealing the focus.  Another job VERY well done. 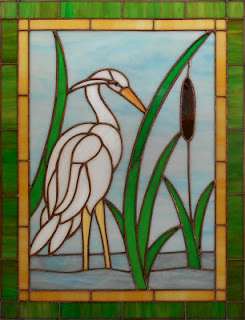 This is an adorable little Sunflower Panel that Tracey completed and I have to say that as a panel it turned out even better than I thought it would.  And to think that this started off as a quick sketch of a Sunflower to illustrate the right and wrong ways to utilize the grain of your glass.  Out of the smallest ideas magic can grow- if Tracey is the gardener! 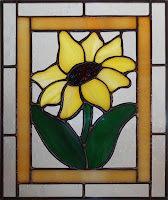 Myrt finished the wrapping and soldering on her pair of Angel Wings and they certainly are inspirational.   Her use of iridized glass is nothing short of perfect as is the workmanship that went into making these.   The curves all flow smoothly and the outside edges all line up perfectly which makes me very proud of Myrt's work indeed. 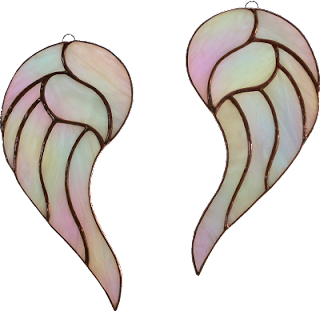 A while back we had a student that our longtime readers will certainly recall.  Janet's shined brightly with all of the projects that she made with us but she sadly moved away.  Luckily she moved near Armstrong Glass so when we drive through Georgia and stop for glass we give her a call so we can meet and catch up with each other.   During our latest get-together she showed me these pictures of a fireplace screen that she made not too long ago and I told her that I needed to post them because, Wow(!), has she done a beautiful job on this!   Janet is easily one of our biggest successes because she's doing stained glass all on her own and doing a wonderful job at it as well.   And that's what makes me appreciate  being a teacher. 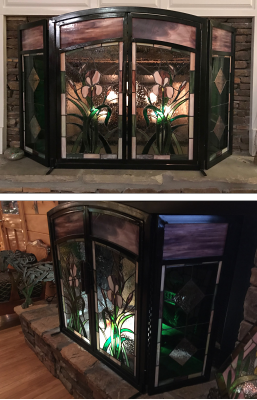 Next we have Rowena's latest Modern Art Suncatcher.  These are pretty popular here in class.

And here are four more Modern Art Suncatchers that Cindy made this week.  These certainly prove that worrying about color is a flat out waste of time because you just can't screw these up. 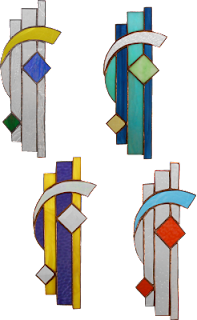 So check this out!  Beth is one of our newest students and she came into class Thursday night with this window all cut out and ground!   And to think that she worries about how she's progressing.   I say she's doing wonderfully and can't wait to see this completed when she comes back in to finish it off. 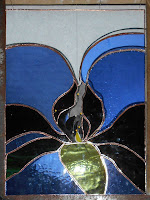 Although it's hard to see because the background is clear and the heart border that traces out the yellow flowers is white, this is going to be one beautiful window.  When Linda F showed me this pattern I had to laugh because I had already saved it on my computer a few months earlier as a window that I would possibly make some day.   Linda is already grinding this so she'll be finished with this before you know it. 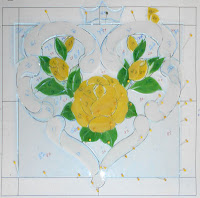 Patrice also has a lot of clear glass in her window which is invisible in the picture below but all of the glass has been cut out for her 4H Clover window and she's already begun grinding by starting at the bottom left corner.  I suspect she'll begin wrapping these when she comes back in because this already fits together pretty darned well! 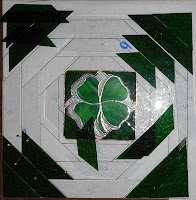 Rowena also started a new Window this week and she gets extra points for realizing that she only needed to trace out pattern pieces for 1/4 of the window.   By cutting two of each pattern piece and then reversing them and cutting two more she's able to get all of the glass cut out for what is surely going to be a beautiful window.

Linda L only has a few scant pieces to go on her 4th of July Mickey Window and then she'll move along to the grinding process.   She's taking her time while cutting out her pieces and you can see that it almost fits together perfectly before a single piece has touched the grinder. 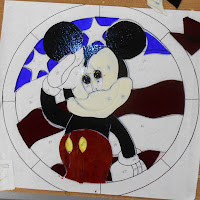 Further on down you'll see another window that Tasha has all ready to be colored and waxed.  Because she didn't have enough time to do that in class Tasha resumed working on grinding her Abstract Poppy Window that she had started a few weeks back.  This only needs a few more pieces ground before she gets to wrap it 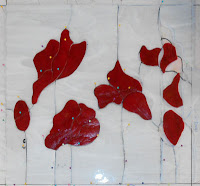 Martha spent her night replacing a few pieces in her Deer head Window and is ready to get a border attached to it now.   That won't take long at all so she'll begin soldering when she comes back into class next week.

Susan R's Owl Of Many Colors is so very close to being completely ground already.   She's really flown through this project (no pun intended) and I have no doubt that she'll begin wrapping it when she comes back in.  Her use of color in this is absolutely perfect. 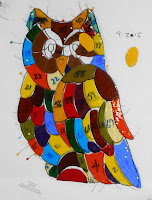 Mary Grace is missing a few pieces but she's moving along at a nice steady pace on her Iris Window.  She isn't missing all of the pieces that you see left opened in the picture below so she still has some grinding to do before she starts wrapping what she has.   Once you begin grinding a window and you discover that you're missing pieces it's best to just tack the window together and then use the openings in the window itself as a pattern for the missing pieces. 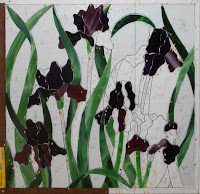 MiMi finished the soldering on her Rose Window just as class was over so all she needs to do on this is to wash it and add a coat of patina to it.   Even though it's not washed yet you can easily see that this is going to be one stunning window.  Next week we'll see MiMi get this completed and another window started. 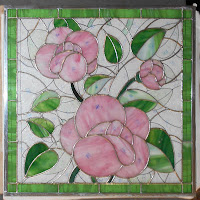 Here's another look at the Seahorse Window that Becky S is making.   With a good majority of the pieces already ground she's doing very well indeed.   This is a complex pattern and once the grinding is completed she'll begin cutting a lot of those pieces in half to give it even more detail. 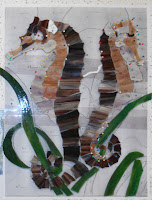 Look at this!  With just 8 pieces left to go (or 16 depending on what Melissa wants to do) this window is so near ready to be soldered that it isn't even funny.    Her eye for exactness is dead on and this makes the original that she found on line look downright bad!   The end is certainly near on this. 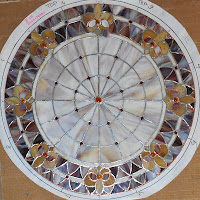 Myrt is working on a Modern Art Suncatcher of her own and she's gone patriotic in her version of this popular design.

With the last border all cut out and tacked on to her Peacock Window, Susan D is ready to move on to the easy and relaxing task of soldering.   This week she also got the Peacock's crest cut out and if I were to say that it went together perfectly then I'd be understating the fact.   When Susan returns we'll add some zinc channel to this and then she'll complate the soldering.

Lastly we have another window that is so very close to being completed.  With just a quick washing and coloring left to go, Tasha will easily finish this when she comes back in.  That means that we'll be see this among our completed windows in our next post. 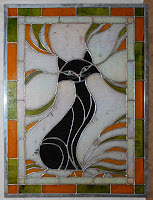 We'll be back next week on Monday with the latest pictures of all of our students wonderful work so be sure to come on back.  We'll be sure to light up a window or two for you!