Fox On The Run

In the Pelican pattern below the two horizontal lines forming what will be water is irregular in the top pattern because horizon lines and water lines are always imperfect.  The pattern below has has been drawn with perfectly straight lines which is fine (if that's the look you're going for) but the top pattern surely makes a more realistic window.

The top Star pattern was drawn free handed and the lines are anything but straight.  In the lower Star pattern a straight edge was used and the results are much more pleasant to look at.   Since this star is an emblem all of the lines should be perfect.  If we were making a star in the sky it would be a different story however.

Just remember this: In nature straight lines are always irregular. Follow that one simple rule and you'll be fine. 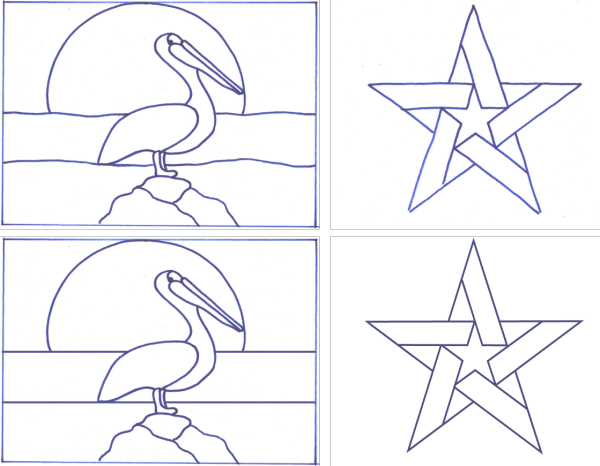 Okay then, Roy's Crab Window was completed this week and Roy is proving that he already knows his way around a piece of glass.   From his use of Mottled glass to the design and even the soldering job itself, well, I'd say that this is just about perfect.  He's even cutting his own Zinc Channel and attaching it himself which is something that I almost always do for our students-- not because they can't but because they are worried they'll use too much lead.   All in all, Roy did a marvelous job on this and he's primed and ready to start something even more challenging. 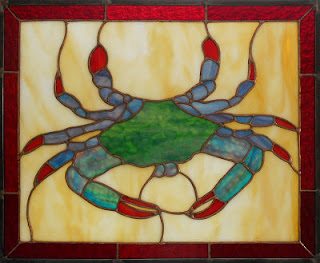 Carol's Fox is the cutest thing!  Sometimes coming up with a pattern isn't as easy as you might hope and this was one of those cases.   The fox's head and body came from two different pieces of clip art that we stitched together into the fox you see below.   If I hadn't mentioned it you'd never have guessed that this is more 'Frankenstein' than fox!

Cindy's Metal Shark was finished this week and it really matches the official logo wonderfully.  She took her time, made sure everything fit and then made sure that it was a perfect circle that we could bend a small zinc channel around to set it all off.  Excellent! 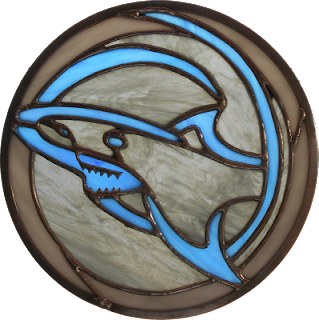 Linda L was on a suncatcher roll this week as she finished off two pairs of Mickey and Minnie Mouse Suncatchers.   The workmanship is excellent and the glass that she used is PERFECT for this pair of mice. 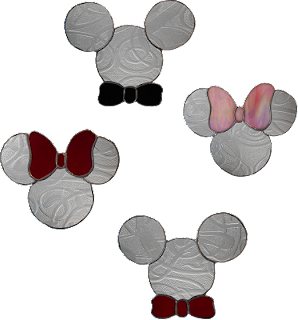 Linda L also put the finishing touches on these two Beveled Heart Suncatchers, one in red and the other clear.  Again this is beautiful work and they are both perfectly symmetrical which is THE most important thing about making these. 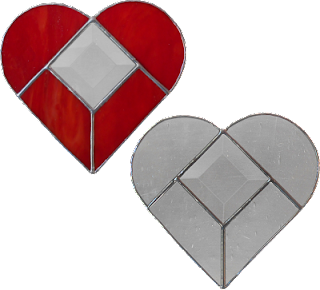 Linda F came into class with this Tree of Life Window all cut out and just about completely ground.   She only has a piece or two left to go and then she'll begin wrapping all of these pieces.  When she started this she hoped to be able to use up a lot of her scrap glass.  She says she did but that she still has a long way to go before that scrap bin is empty. 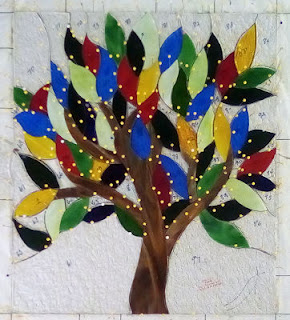 MiMi is back and ready to tackle her window!  Her Roses had no background glass cut out when she first came in but by the end of class she had all of the background cut and ready to be ground.  I saw a Facebook post that she posted  two days ago and I will tell you that she's already got most of this window ground and fitting together perfectly.  Thankfully it looks like her finger isn't causing her to have problems when it comes to getting the stained glass job done. 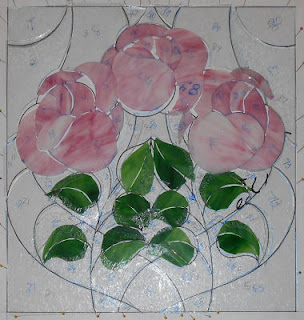 Lara didn't managed to grind or wrap anything while she was at home between classes (and there's nothing wrong with that) so when she came in she immediately  headed over to a grinder, skimmed her pieces, wrapped them, tacked them, cut the missing right edge pieces along with the three sections of clear background that go between the flowers and bottom section, and then joined everything together with solder.  Whew!  And if that weren't enough she also got her first border cut and ground as well!   At this rate she'll most likely be soldering this when she comes back in next week. 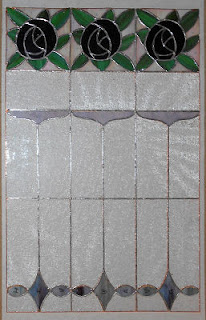 Cindy has begun making two Breast Cancer Ribbon Hearts, one made with a pink heart and the second with clear glass forming the heart.   She has them both ground and only needs to wrap the pieces before she can solder them and finish up.  This has an interesting design addition that you'll see when these are completed and I'll talk more about that next week. 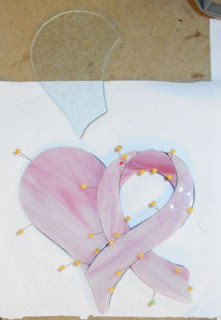 Deja Vu?   Not really.   This is Rowena's version of the Humming Bird and Flower Window that Carol made just a few weeks back.  Rowena loved it so much that she had to make one of her own.  She's flying through it as all of the cutting (save for the final border) has been completed!  She's working on grinding this to fit and I don't think that will take her very long at all. 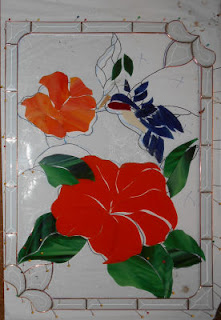 Meanwhile, Terry is doing a remake of her own.  Her first Butterfly and Flower Window sold quickly so she's been hard at work replacing it with another one made in different colors.  With all of the glass cut already, Terry has begun the grinding process.  She certainly makes these quickly. 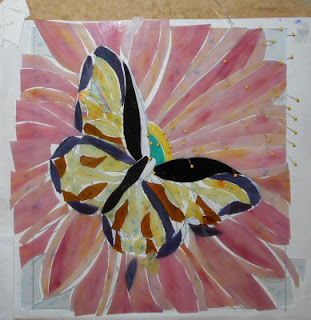 Tracey resumed work on her Address Window and now has everything cut and ground save for the borders.  She already has the two end sections wrapped and ready to be tacked together and she's taken the center number section home to wrap during the week.   She also has two Aeroscopes in the process of being completed and if Barbara comes in next week Tracey may jump over to that project before she tacks this Address Window together.

Shelley has her Cat Window just about ready for solder and only needs to cut two more pieces of glass before she can begin work on the border.   When dealing with letters I always recommend skipping the left and right end pieces until the rest if the letters and background are cut and tacked together.  This allows you to center the name perfectly since the letters tend to shift while grinding and tacking. 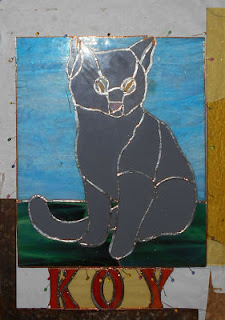 What you see here is Myrt's Dog Window all tacked together and ready for a border.   Myrt has decided to run a bone along the top of this window and she's also going to spell out his name (Ivory) along the bottom of the window much like Shelley's Cat Window. 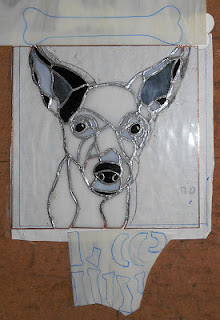 Jeannette was with us again this week and she resumed work on her second Beveled Window.   Once the center was tacked together she was able to get her final border cut and ground.  After attaching it we put a zinc channel around the window and now Jeannette is ready to begin soldering! 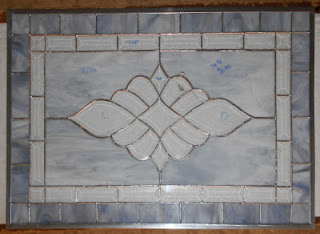 Deja vu??   What a minute-- is it happening again!  Yep.  Susan R loved Shelley's Chef Window so much that she's making one with a color scheme all of her own.  With just five pieces of floor left to cut and then the background, this window is well under way. 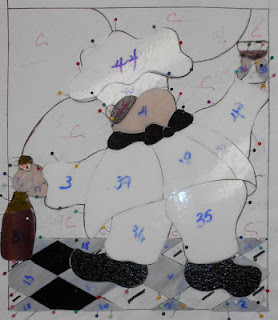 Imitation is the sincerest form of flattery and Carol loved the Aeroscope that I made and has decided to make two of her own.   She has her glass all cut and has taken the pieces home with her so she can come back in with them ready to be assembled. 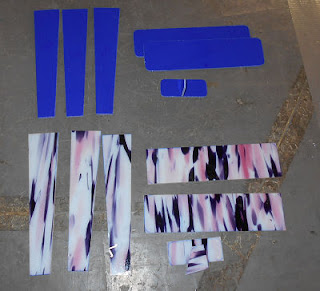 Mary Grace is almost ready for her borders to be attached.  Filling in the missing pieces only took two weeks and although there are only 5 more pieces to go we aren't going count that as a third week because she'll surely be getting her first border attached when she returns. 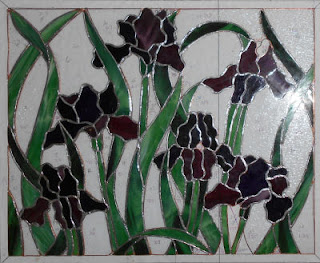 With her two hearts completely ground Melissa is now ready to start on the complex background of her Sacred Hearts Window.  She actually has a lot of it cut out already so we'll see this taking shape quickly in the weeks to come as she begins the grinding process on the rest of these pieces. 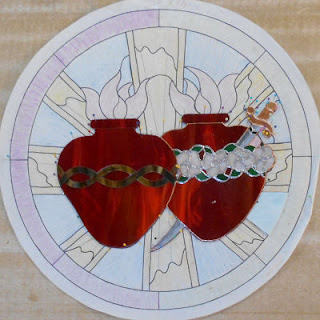 Becky filled in the remaining pieces of her Sea Horses and we will surely see background glass get cut for this when she returns.  I'm not sure what she will be using so I'm anxious to see what she chooses! 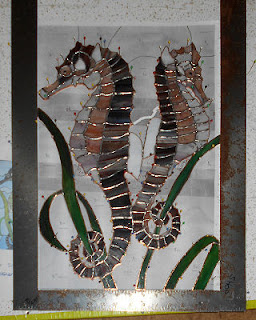 And Brenda is working on a Magnolia that she printed out (from the internet?)  With this project she's learned just how easy it is to make a stained glass pattern from a line drawing.  People often believe there's a right and wrong way to position lead lines that will make a cut possible but in all honesty the only rule I adhere to is that I try to make the smallest lines possible. 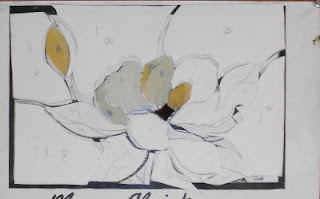 Linda L isn't the only person who's got two pairs of Mickey and Minnie Mouse Suncatchers cut out-- Susan D also has some of her own.  These are complete save for a bath and some patina to color the lead.   We'll see that happen when she returns in two weeks. 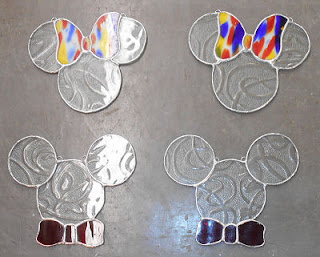 Betty has been busy working on a repair and she's doing a great job all on her own.   By digging right on in to these 14 or so broken pieces she's building the skills to repair just about anything.  The trick is to only knock out one or two pieces at a time.  If you get too greedy and try for more you'll end up with even more broken pieces as the window becomes less and less stable. 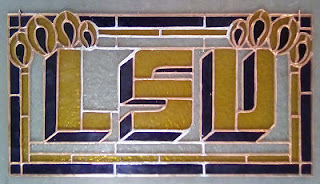 Next up we take a look at the pattern for Roy's next window.  He found the design on the internet, printing it out to the size that he wanted, traced it out and then squared it all off (a VERY important step indeed).  Next week we'll see some glass cut out for this and I'm sure it will be stunning. 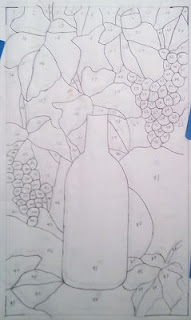 Sometimes things escape me and this week I'm guilty of not stopping Beth from packing up all of the work she did on her Flower Window.   After all of her green glass was cut I never got a picture of it while it was placed on her pattern.   Next week I promise to show you just how far along she got and I'll be sure to stop her from packing up her pieces at the end of the night.  A towel or an old blanket is all you need to keep your work intact while transporting it. 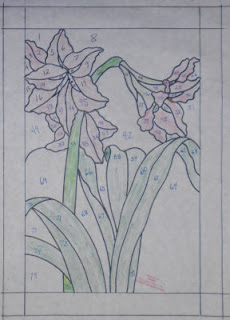 And that's it for this week.   I can't believe that half the year is gone already but when I look at all that's been accomplished in our classes during the past 6 months it seems more reasonable.  Here's to another 6 more productive months!