There are people who grind as they cut rather than cutting all of their pieces and THEN grinding.   I will stress again that for numerous reasons it is best to cut all of your glass before grinding even a single piece.  One of the biggest advantages to working this way is that it allows you to get a perfect fit with the pieces that you have cut rather than to the pattern which your cutting is likely not going to match.

When you grind a piece after cutting it the only thing you can base the shape on is the pattern.   If the piece next to it isn't cut perfectly the two pieces of glass won't line up and you won't be able to make an adjustment on the previous piece since it's already been ground.


It's also FAR easier to grind when you have the next available piece to use as a 'cheat' so you can grind it perfectly with just one trip to the grinder.  Some students have mentioned that I tend to ignore them as they work and if they are grinding as they cut then yes, my help comes only in the form of wrapping or soldering.  It's bad technique to grind as you cut and I won't help a student work incorrectly.   And that, is they say, is that.

Now Lara did NOT grind her Flower Of Life Window as she cut and notice how perfectly her pieces fit together, all the curves are form fitted and the straight lines are perfection.   Not only that, Lara got ALL of the soldering of this large window done in just one class.  And let me state for the record that her soldering is amazing.  I'd trust her with soldering  any of my windows!  Last week one of our students asked me why I keep calling this a Flower Of Life Window so I figured I'd pass the information on along here as well.   When Lara came up with the design it was a single long flower panel.  She asked if there was a way to widen it considerably and because of the shape I immediately though of Frank Lloyd Wright's Tree Of Life design.   By tripling the Flower image (as F.L. Wright did) we widened the window without adding any distortion into the design.  And that is why I call it the Flower Of Life. 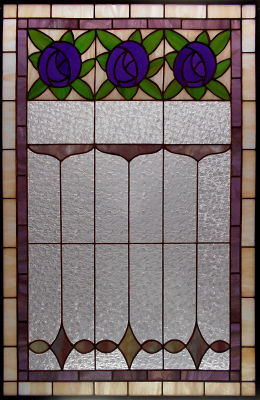 Here's a picture of a stained glass interpretation of Frank Lloyd Wright's Tree Of Life for comparison: 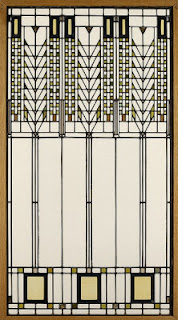 Betty's Newest pair of Stylized Crosses are out the door!  These may have no real color to them but they are stunning nonetheless, wouldn't you say? I've always wanted to make a black and white stained glass window just to buck tradition and I may do it yet. 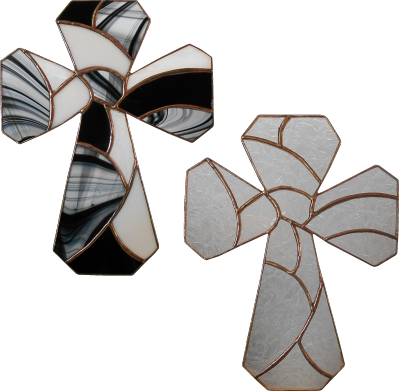 MiMi's getting further and further along into the grinding process of her newest Rose Window and she's at about the halfway point now.  She's fastidious and precise (she's a Killer Queen?) about her work and her end results have always shown off her attention to detail.  She's using the pieces surrounding the one she is working on as a guide and everything fits perfectly.  Beautiful work indeed.. 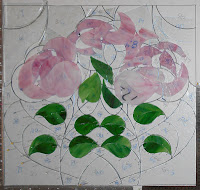 Here's Brenda's Magnolia Window.  With just the background remaining to be cut, I have a sneaking suspicion that this will be completed in about two more weeks.

Carol has her pair of Aeroscope Planes all ready to be assembled.   There are only four dots of solder left to go (to attach the landing gear wheels) and then she'll insert the mirrors.  I'll be sure to give you and inside view to both of these planes upon Carol's return.  Also, as you can see from the three color wheels atop her picture, she's just all set to make two more of these Aeroscopes. 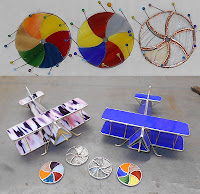 Cindy has her Fantasy Sunset Scene all cut and basically ground.  Once this is wrapped she'll be ready to solder this which I don't think will take more than a half hour to 45 minutes at best.  This is really going to look great with some light behind it.

Roy is about halfway through the grinding process of his Wine Window (which is all cut out-- just not visible in the pictire) and he's made a few changes to it this week.  There's now a punt at the bottom of his bottle and he's also added a lip and a cork to the top of the bottle.   Since the rest of this window is realistic we felt that the flat green bottle had to be altered to make it blend into this window better. (The original design called for the use of an actual wine bottle to be used.)  I think this re-designed bottle is a much better fit and I love the fact that Roy has hundreds of pins in his grapes which stop them from shifting as he's grinding.  (The pins are visible as little yellow dots.)

Next up we take a look at Tracey's Aeroscope which has only one color wheel left to solder before it's completed.  That means that this will surely be finished very early in he next class.  Tracey already has her landing wheels attached and the the plane has been patina'ed  and waxed so she's about ready to go!

Myrt's Dog Window is now officially all cut and ready to be soldered.  I probably wouldn't have picked the glass she used for the border but it is absolutely PERFECT!  When things like this happen it reminds me that I should hold glass next to the window before assuming that its the wrong choice because, well, just look at this.  Soldering begins next week and I know Myrt is up to that. Because she cut all of her pieces before grinding her window she's got a perfect fit. 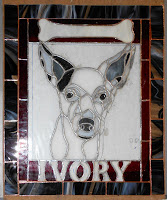 Here's an unusual look at a project that you see a lot here in our blog posts.   This is Patrice's Bumble Bee Lawn Ornament  lying upside down on the table.  Why the odd (and unflattering) angle?  Because it shows you how the finished project is curved rather than flat.   From this angle you can easily see how the tail curves  and you can also see that the wings are curved as well.   It's always hard to get a picture that shows just how fancy this is but hopefully this view helps.   Even Patrice was shocked at how this was put together.

Look at the cutting that Linda L has achieved on the tiny little pieces of coral in her large Undersea Window.   She took her time while cutting each piece making sure to cut off the lines as she went and this is what she ended up with.   The beauty (the EXTREME beauty) of this is that what you are looking at hasn't even been ground yet!   Yes, it fits together that perfectly before it even visits the grinder.   This is amazingly GREAT work! 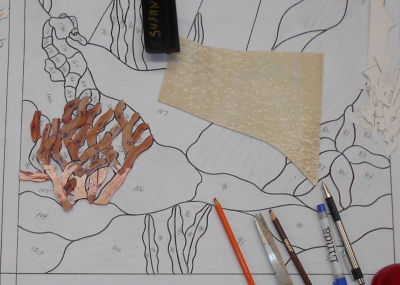 Terry is so close to completing her Butterfly On A Flower Window that it isn't even funny.   With the final border attached and the channel in place Terry spent most of her night soldering the front side of this window.  With only the back side left to go I'm thinking that it's safe to assume that this will be featured in with our completed projects when we return next week.  Just look at how perfectly her pieces all line up. 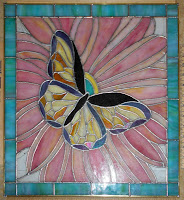 Susan R is just about ready to begin wrapping her Chef Window.  She's still got to grind the 4 buttons into the Chef's jacket but that won't take long at all once those buttons have been cut.  There's a good chance that we'll see this tacked together when Susan returns. 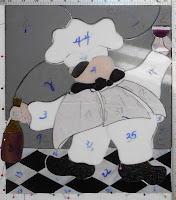 Shelley's Koy The Cat Window is all cut out and ready to be soldered.   This week saw her attaching the name plate along with the border and the finishing brass channel.  By cutting the left and right pieces of the nameplate last she was able to center Koy's name purr-fectly. 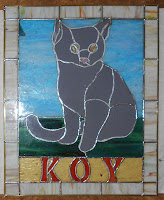 Mary Grace has all of the glass attached to her Iris Window and is ready to begin soldering!   Sadly, MG had to leave class early this week as she wasn't feeling well.  I hear that she's doing much better now and I know she's anxiously  looking forward to begin soldering this window to get it completed and out the door. 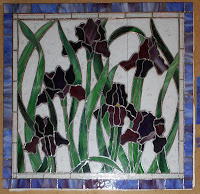 With all of the background glass cut out for her Seahorse Window, Becky was forced to make the decision on what colors she wanted to use in her borders.   In the end she went with a clear textured inner border (it's in the picture-- just not easily visible yet) along with a colored outer border that will most likely match the darker color in the Seashorses themselves.

Yep, it didn't take long for Rowena to get this Flower and Humming Bird Window finished.   Okay, so it isn't finished yet but with just the back side left to solder I can safely say that this will be completed soon (possibly when she returns.)   This week she got her outer border attached and what a beautiful choice it is! 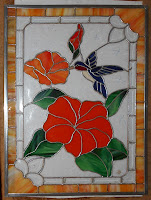 Lastly we take a look at the next Mickey Mouse Silhouette Suncatcher that Susan D is making.  It's hard to see the texture on the glass that she's using in the picture but it is absolutely perfect in this application. 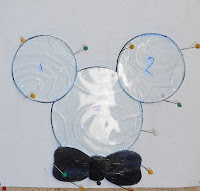 And that about wraps things up this week.  It looks like we're on track to have a large number of completed projects when we return so be sure to drop on by again next week, same bat time, same bat channel!