I Rode My Bicycle Past Your Window Last Night

What constitutes a fit?   Some people believe that if apiece fits into the opening they can move along to the next piece but I'm here to tell you that isn't always the case.   We look for pieces that fit well, not pieces that just fit.   You can fit a square peg in a round hole but that doesn't make it a round piece OR correct.   The orange pieces below fit into their repective places but as you can see they don't represent the shape that they should be.

Take your time and smooth things out.   Attention to detail is what turns people's heads and makes them 'ohhh' and 'awww' in amazement.   Any beginner can turn out shoddy work.   After a few weeks of lessons you should surpass beginners. 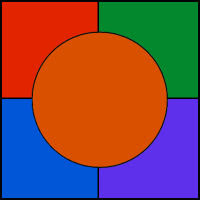 So before we jump into things I have to say that Sheri finished her window this week and although I can't show it to you (due to a confidentiality clause) I can tell you that it turned out to be the finest piece in Sheri's stained glass repertoire.  And that's really saying something. 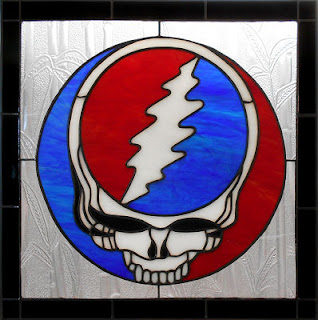 Brenda's Freedom Prosthetics Window is finished and what a work of art it is.  This was a commissioned piece and she went all of the way with it by firing white stars onto the blue glass that forms the flag.  The window has been picked up already and Brenda can now breath a sigh of relief.

Terry's Spiderman window is officially complete and it really makes my spider-sense tingle!  (Spiderman really does have that!)  When it was washed and ready to be colored Terry decided to go all out and color the lead on the border black, the lead on Spiderman in copper, and his webs silver!   Can he swing from a thread?  Take a look overhead! 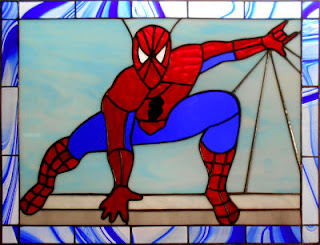 Jeannette finished her beveled Cross Window which she essentially designed on the fly.   It started off as just a 4 piece bevel cross cluster and then grew from there.  The addition of the deep cobalt blue glass was exactly what this window needed to catch the viewer's eye and as you can see she's used the same border glass that Terry used for her Spiderman Window.  Alas, there's no more Blue Baroque being made and this was our last piece so say goodbye to one of my favorite lines of glass- Baroque. 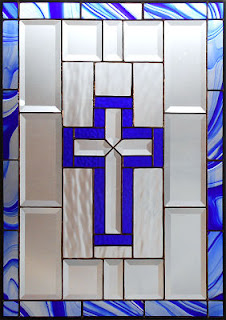 Mary Grace completed a small Tulip Suncatcher last week but I never got a picture of it.   During the week I realized that I had the same suncatcher made somewhere in a box so this week we'll look at mine and just pretend that we're looking Mary Grace's (whose Tulip turned out just as beautiful, albeit with a slightly different color scheme.) 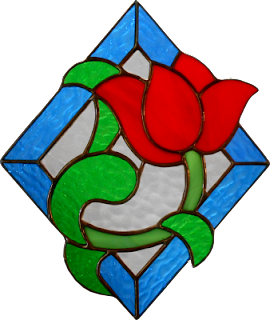 Rowena finished another Bumble Bee Lawn Ornament while she was at home and what a great job she did assembling it in 3D!  Another job well done. 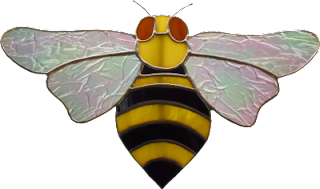 Barbara got all of the pieces for her Humming Bird and Fuchsia cut out and then even ground everything as well.  She's taken the pieces home to wrap so she can tack them together and then trace them onto a  sheet of background glass.  This minimizes grinding and really saves glass but is only possible to do when there's more background glass than subject matter- as in this window.

Angie had cut and ground a bird suncatcher while she at at home last week and when she came in she assembled some large bevel pieces to form a border for it.  She cut a piece of blue to fit the center and then cut the bird into the blue glass creating this wonderful window. It just needs a little solder and then this will be ready to hang. 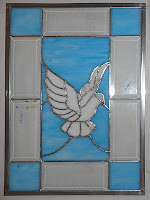 Carol also worked on the 'tubes' for two stained glass Kaleidoscopes this week.  By the time she left class they were completed and ready to be washed and colored.   Since she already has the color wheels completed she only has to insert the mirrors and make the two stands when she comes back in! 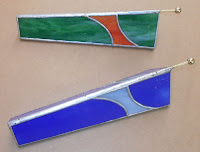 Last week it was an empty pattern but this week Melissa has filled in that patterns with all of her leaves.   By the time she left class she even had some of the tree branches cut as well.  This window is moving FAST!

Susan R  has begun making a new Stained Glass Women Window and it looks like it will be very stunning indeed.   She using dark but vibrant colors which don't really show up while it's resting on the table so this will be a treat when it gets some light behind it and totally changes in appearance. 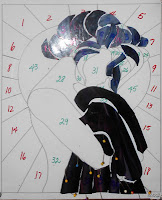 Terry also worked on an American Flag Window and has provided Russ with a stencil so she can (like her sister) get some white stars fired on her blue glass.  This is one of the nicest flags I've seen yet and I love it! 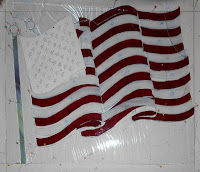 Lara has begun grinding the pieces that she has already cut out for her latest African Woman.  She's done this to partly get things into shape around the head of the woman since she's changed the hair style altogether and has no pattern pieces to continue working in that area.  Also, she'll be able to cut the oval from one piece of glass if she wants to later on down the line. 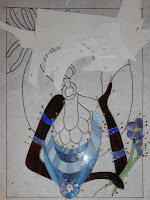 Rowena also began working on a Fish Window and was slightly shocked when I revealed my method to coloring stained glass fish-- pick out a bunch of greens and mix them up!    Just wait until you see this next week she she has even more glass cut out. 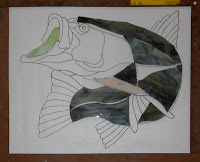 MiMi's Crab Window is literally taking shape now that she's begun the grinding process.  If you enlarge the picture you can see that she has the left side fitting together and is now making her way to the center of the window.   I've seen a newer picture that she posted on Facebook and she's got a lot more of this ground so she's moving along full steam ahead on this. 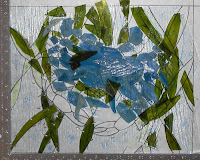 Susan D is filling in all of those leaves on her Tree of Life Window quickly now.   She's taken her time in cutting out all of her pieces and finding that all she needs to do is skim them on the grinder to get them to fit.  And that's exactly why this is going together so quickly for her. 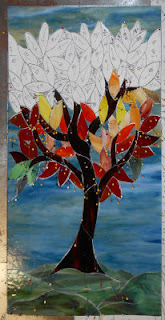 Tracey got all of her Cardinal Window ground and she's really doing exceptional work.  There was a piece of two that got skipped over while she was cutting but we're going to re-cut those when the rest of the window gets tacked together upon her return. 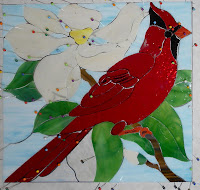 Mary Grace cut and ground a new Lawn Ornament this week and then even got it wrapped before she called it a day.   That's very quick work indeed.  Sadly she won't have this completed next week because MG is having surgery next week.  We wish her the very best and hope to see her back in class soon.

Mary is someone who also  finished off all of her grinding this week.  She's taken her window home with her where she hopes to get everything wrapped so that she can add a border to this upon her return.   Wonderful work indeed.

Cindy is working diligently on her Rosie The Dog Window and got the background pieces cut out for the dog's name.  Next she'll tackle the background for the curved section which will be a little more difficult since the glass will be cut from small pieces rather than one large piece.  Nonetheless, it will get done and it will look stunning. 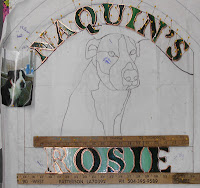 Myrt is well on her way to completing her male and female Cardinal Window as you can clearly see from the photograph below.   She handled a lot of this while at home and I have no doubt that this will be finished when we next see it. 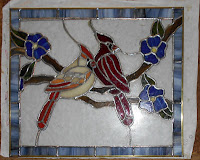 With her commissioned Freedom Prosthetics Window now in the past, Brenda was able to resume work on the Magnolia Window that she began a few weeks ago.  With the first border cut out Brenda will attach the second one when she returns and possibly even finish this.

Shelley's got all of the pieces to her Buxom Wine Ladies all wrapped which means that this window is ready to get a border attached.   She still hasn't picked a color yet so that will be the first things she does when she comes back.  I can't wait to see how she finishes this off.

Martha has begun soldering her clear textured and beveled Sailboat and Lighthouse Window.   With the front almost completed she'll be turning this over when she returns. 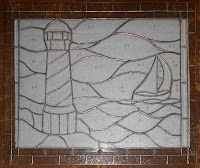 Patrice started a flying Mallard this week and it will be a stand alone piece rather than an actual window.   I believe that she only has about 20 pieces left to go so this should move quickly for her but the problem with this pattern is deciding on colors.   You really can't lose but a lot of people tend to over analyze their picks (myself included) so we'll see where Patrice gets to on this upon her return.   Once the glass is cut this will be a piece of cake! 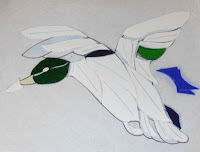 Roy has begun work on a large (50 x 25) Geometric Stained Glass Transom Window.   If you look closely you can see a section on the lower left that has been surrounded with orange highlighter.   This shows all of the pieces of the pattern that need to be cut out to complete the entire center of the window.   Roy will cut out 4 each of these pieces: 2 normal and 2 reversed.  He'll also build this in sections before joining it to make transporting it easier. 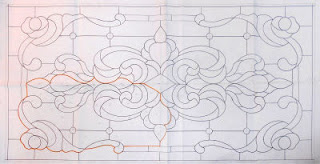 And there you have it-- one more week in our shop here in Bayou Salé.
Paul
Bayou Salé GlassWorks