The biggest problem we see in our classes stems from students believing that if something doesn't fit well (even by just a little bit) that it won't matter in the end.  Sadly, it will matter a lot.  It a piece extends beyond the line of the pattern then it will start pushing multiple pieces off track.   Once you have 4 or 5 pieces extending over the line you're project will be  askew in multiple directions.  If your glass hangs over the pattern line then you HAVE to fix it before continuing.  There are no ifs, ands, or buts about it.

In the picture below only the piece on the far right is ground correctly.  Can you tell where the problems lie in the first two pieces? 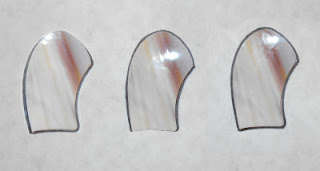 Yes, the piece on the left is too high on the top of the curve.  The line on the pattern is NOT visible there which means that problems will surely occur later on.  The problem with the middle piece is that it hangs far too low on the pattern.  A heavy skim across the bottom of the piece on the grinder will fix that quickly.  The winner is the piece on the right which has been ground perfectly to show pattern line all around it.   If you can see that pattern line around all of your pieces then your windows will go together smoothly and effortlessly.  That's a fact.

Speaking of smoothly and effortlessly, Beth's Bird Of Paradise Window went together just that way.  It's also a wonderful mix of color as well.   She's been working exclusively in the shop to help hone her stained glass skills without developing bad habits that can get by us when students do a lot of work at home.  I have to say that her ability to utilize color has really come into focus with this window because it's perfect! 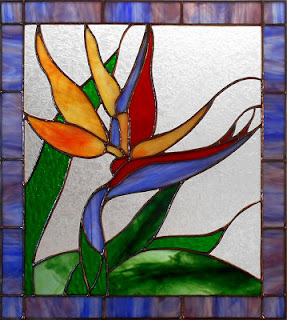 Patrice finished her latest Sunflower Window and was rushing the clock to do so.   By the time she left the window was all soldered so after she left I added hooks and the colored it for her.  She's got her next project picked out and will start that upon her return. 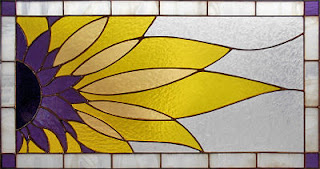 Angie's got a Sunflower Window of her own completed this week and you can see that she went with not only a different color scheme, but a different hanging orientation as well.   Diversity is the key to fun stained glass!

Carol  got her Grateful Dead Window all soldered but since she's coloring it black she didn't have the time to let the black patina set.  So she began working on her next project-- Kaleidoscopes!!!!  You can see she's got the four color wheels just about ready to be wrapped and that's the hardest part of these kaleidoscopes.

This week Cindy worked on the letters that spell NAQUIN'S  across the top of her Rosie the Dog Window.   they aren't just cut out but ground as well.   When we next see this Cindy will certainly have the background cut for the the name ROSIE along the bottom. 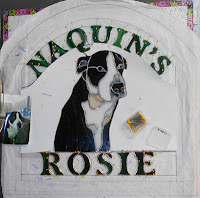 Jeannette's Cross Window is certainly a work in progress because she's ore or less designing it as it goes together.   She decided to trace the outer edges of the beveled cross with some blue glass to help prevent the cross from becoming lost in all of that clear glass and to help tie it in with the blue border that she wanted to use.   Perfection! 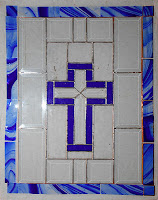 Linda L has all of the sea life in her Underwater Scene tacked together and has moved along to the long sections of water which join everything together.  Using two sheets of blue glass she's able to cut most of the water from one piece ensuring that the grain of the glass lines up perfectly.

Lara resumed work on her latest African Woman Window and she's already got a good portion of this cut out already.  The glass that she's using for hair is the perfect texture for the job at hand but it's heavily texture on both sides of the glass making it very difficult to cut.  After considering the amount of glass we had available Lara decided to change up the thin dreadlocks in the upper left of the window and replaced them with a bun.  It still looks great to me. 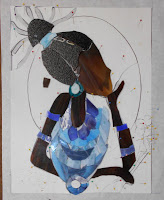 Susan R is very close to completing her Beach Sandals Suncatcher and will surely finish it upon her return.  With just the back side left to solder it won't be long now. because all it really needs at this point are two hooks and some patina fro the lead. 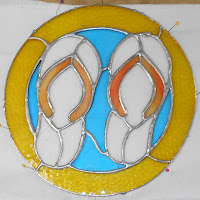 Wow, Tracey is really making short work of her new Cardinal Window.   It's not only all cut out but just about halfway ground as well!  I love the pattern and I love Tracey's work on this. 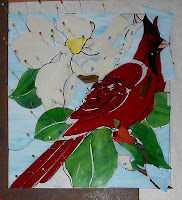 Susan D's Tree Of Life is filling out beautifully with each piece she grinds.  She's taken her time cutting out her pieces and finding that the grinding is going along much better than it normally does! This is already shaping up to be another highlight in her stained glass repertoire.

Terry's Spiderman Window is all set to hang once he gets some hooks put on him and some patina on the lead.  The border glass she picked is just perfect for this application and Spiderman has never looked better. 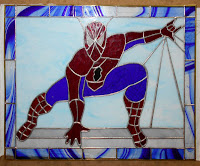 Mary Grace started this Bird Lawn Ornament and got it all cut out and ready to be ground in just one class.  She's been making smaller projects and I think she's benifiting by working on them because it allows her to accomplish the various steps more quickly than if she were doing larger projects.

Becky S has started grinding her first of three Geometric windows and in just one night she managed to grind over two thirds of her window!   Using the pistol grip and a straight edge is really paying off because her time at the grinder has been cut down considerably. 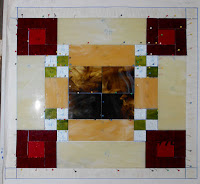 Martha's working on her final border now and although this all clear window is hard to see on the work table, it will sparkle like mad when it's hanging with some light behind it.  She'll begin soldering this when she comes back so we'll see just how much this sparkles shortly on. With all of the subject matter cut out for her Cardinals Window, Myrt has moved over to the grinder where she's gotten a great deal of her background all fitted together.  It won't be long now. 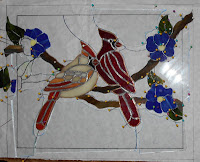 Brenda got the blue glass cut out for her flag and attached to her Freedom Prosthetics Window along with the two borders.  With just the back side left to be soldered Brenda is really hoping to have this completed when she comes back into class.   I hope so as well because I can't wait to see this with some light behind it.

Roy came back in with with his Kaleidoscope Air Plane and decided to go all out and perfectly re-create  the plane he's trying to match by adding pontoons to it!  He got them assembled and will connect them to the body once he gets some sturdier brass rods to support them. 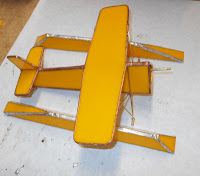 And finally there's Melissa who has begun a new window featuring Autumn Leaves inside a tangle of tree branches.   As you can see it's much prettier than the drab description I gave it and I know that with the colors that Melissa has picked out it can't be anything other than beautiful.

And that wraps things up this week.   Come back next week to see even more finished projects and to see some new ones get started!