When washing your windows or even transporting them, it may become necessary for you to rest the window on its edge.  I've noticed that most people do this by propping the edge against the corner of a table as you see below (or even the corner of the sink used to wash it in). 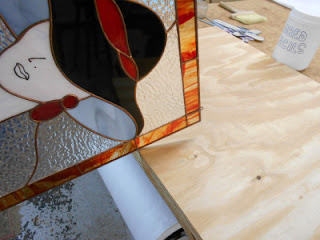 Most won't even think about it but, of course, there's a right and wrong way to go about resting your window on its edge. Ideally, if you are on a table the entire length of the window will rest flat against the surface providing support.   However, if you are resting it on the edge of a table or a sink then you want the weight of the window to land on a lead line as shown below.   Note how the lead line is on the edge of the wooden table. 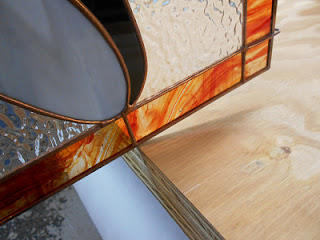 If you put the weight just anywhere along the outer edge of the window you can bend the channel and put a dent in your straight edge.   This is especially true if you are using 1/8 inch brass or zinc channel since they bend so easily.  So, for the record, the picture below shows you the worst possible way to rest your window against something.  If the channel isn't firm against the glass which it never really is, then the channel will easily dent.  Good to know, right? 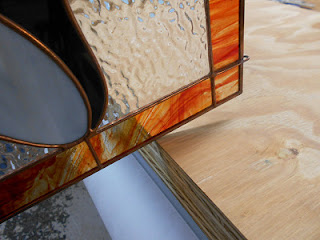 Okay then, Susan D's Tree Of Life was based on the same tree of Life pattern that Linda L is making (and that you'll see a little further on down in this post).  Susan 'stretched' hers out by extending the leaves on the top of the tree and by adding some ground and an extended tree trunk.   That's how she turned a square window into a rectangle that's almost double the height of the original design.   All her work paid off in spades and the earth tone colors make this window nothing short of spectacular.  And the outer mottled border just ties it all together and gives it a real Tiffany look! 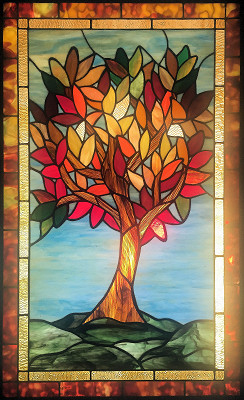 Cindy's Rosie the Dog Window was completed this week and it ends her 3 month journey through this project.   She only worked on it while in class and since she spent two weeks working on another project we can deduce that Cindy has about 30 hours of work in on this design from start to finish.   That's not bad at all when you consider that this window has curved text and two curved borders that had to fit within a certain opening.  Great work! 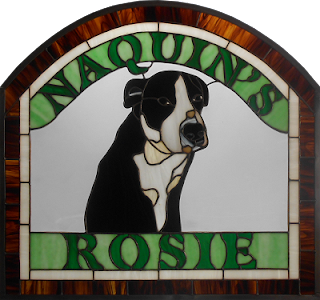 Susan R finished her Woman Emerging and it's another one of those stunning Women Windows that have really been taking off in the stained glass world.   I'm seeing more and more of these popping up on the internet and this particular pattern turned up on Facebook just yesterday.    Susan did wonderfully and this woman has officially emerged and left the shower! 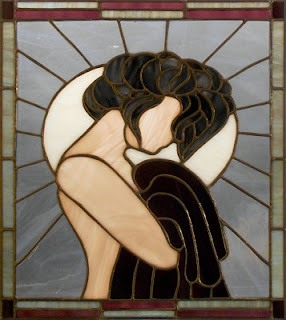 Barbara got her Mary and Child Window completed this week largely due to the fact that she had soldered it at home in between classes.   When she came back in we went over the problem areas and Barbara learned that slow mean S... L... O... W.   Most problems with soldering can be attributed to moving the soldering iron too quickly and not allowing the solder to melt completely so it can become a smooth bead.   That said, her window turned out beautiful and Barbara will begin a new project when she returns next week. 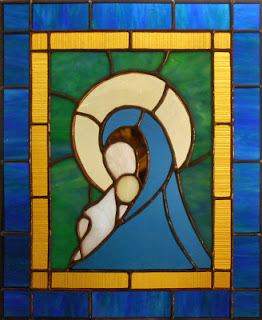 Rowena's Hot Air Balloon Window is another stunning piece that she can be proud of and her soldering is better than ever.  I only touched up two lines on this and those were two that she pointed out to me as being bad when I didn't think they were a problem at all.   Yep, Rowena has it and this window proves it.  Oh, and she made a stand alone Balloon Suncatcher as well which also turned out to be just as nice! 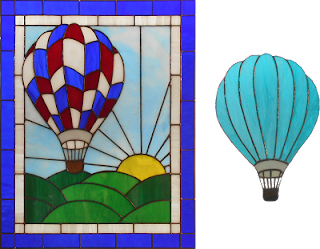 Becky B finished her Cross Suncatcher and there's nothing to find fault in here.  From the cutting, to the soldering (and even the color choices) this is one nice Cross. 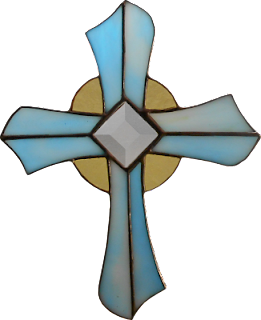 Our next Cross was made by Beth who finished her Celtic Cross made from  a stunning blue iridescent glass.   The cross fits together perfectly and she plans to make another which I don't think will give her any problem whatsoever. 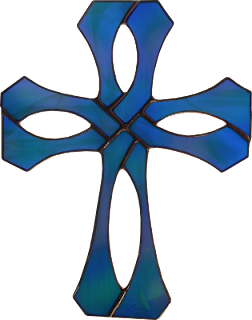 Finishing up our completed projects this week I decided to post a Fairy with 3D Wings that I made this week.  The wings are more difficult to make than you might think, but isn't everything?  The body had been up for sale in the shop for a few years and now that I made it everyone is asking about these lead cast Fairy bodies. 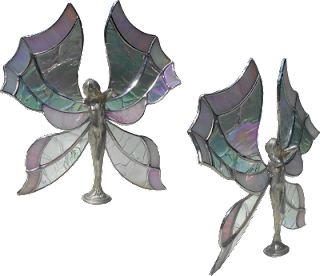 So guess what? Linda F is back in class and she was able to tack together the Tree of Life Window she started a while back before her knee injury!   A window this elaborate deserves a double border but Linda didn't want the border to compete with the tree.   In the end she picked an earth tone for the accent color and when she returns next week she'll add a final, larger clear border to finish it off. 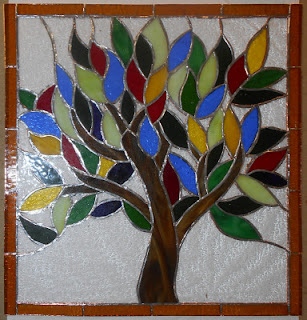 Terry  is working on a miniature Christmas ornament with a ton of tiny pieces in it!   It's a testament to her skills that she would want to work on this because it is certainly no project for a beginner.  This is a pattern for experienced stained glass students only. 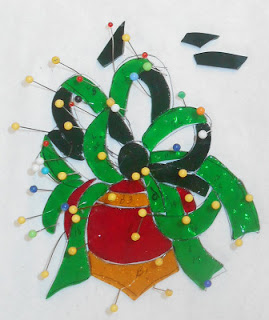 Becky S cut out the tree trunk and all of the white glass for the bird in her Heron Window.   It's a pity that you can't see all of those white pieces against the white pattern that this  is being built upon, but take my word for it, there are 40 pieces of white glass resting atop the pattern here (the smallest ones running along the top of the pattern where they've been taped down so they don't get lost). 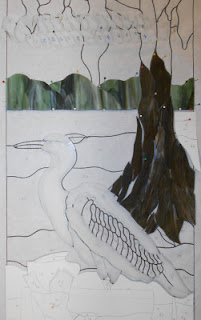 MiMi is grinding away at her Industrial Fleur De Lis but is taking her time and doing a great job.  She's a little worried about working on this window while at home so it isn't progressing at the speed that she normally works at but as I always say, 'Stained glass should be about quality, not quantity or speed.' 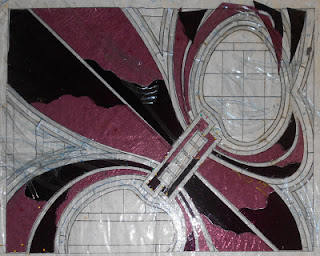 Shelley has finished cutting out her Once Upon A Time Window and spent a good deal of time working on the facial features that need to be painted on the glass.   She's got it all mapped out (look closely to the right) and next week she'll add the paint so it can be fired in the kiln. 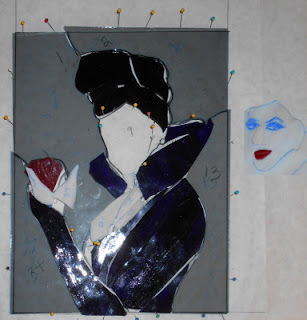 Mary Grace has been making incredible progress on her Birdhouse Window.  She seems to be much more confident in her abilities and I see that confidence allowing her to work at a quicker pace without the need for reassurance along the way.   In short, I'm impressed with her work more than ever! 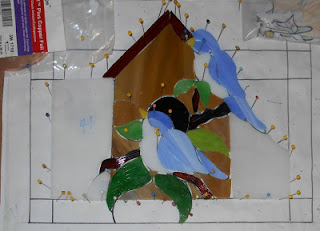 Sheri was able to get all of the glass cut for her Coffee Window which includes the border which is cut irregularly since the subject matter extends into the border.   Although we normally  break the border pieces down into even sections it's fine to  ignore the hard placement of the breaks if the subject matter cuts into the border close to where the break would occur.  This window is a perfect example of that which we'll look at that as a tip of the week when this window is completed (possibly as soon as next week). 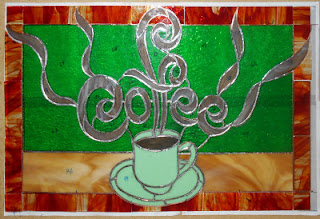 Jan has her Mary and Child all ground and ready to be foiled.   With the hardest part of this window now behind her, Jan will be able to get her border(s) attached next week if she can get this wrapped while at home. 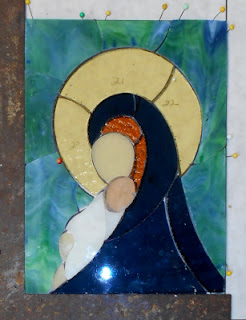 Patrice resumed work on her Humming Bird and Morning Glories Window and she now has everything but the background cut out.  That means that she can start grinding all of her pieces and once things fit she can tack the flowers and birds together and then lay them on top of a piece of glass to get a perfectly aligned background.   As it stands I love her colors and I believe that this is going to turn out to be a very beautiful window. 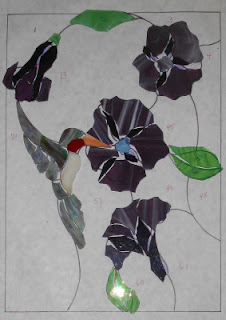 Linda L forgot to bring in the glass that she planned on cutting so she began grinding the pieces of her Mouse Window this week.   She's obviously working from the bottom up and the pumpkin part of this design may very well turn into a suncatcher pattern soon because it is looking incredible!   Just look at the depth that the two different oranges create when used together. 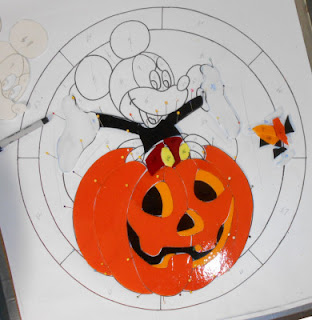 Brenda resumed work on her Caduceus Window getting the staff, the snakes and the round border cut out.   She's begun grinding these pieces and will add the background after these have been tacked together. 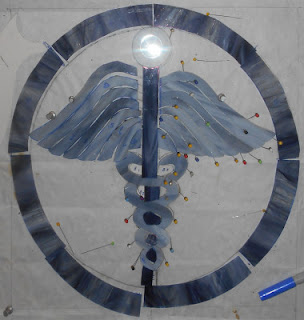 Beth began working on a new Iris Window which is VERY similar to one that she already made.  The only difference with this Iris is that its size has been altered slightly in length and width so a beveled border can be added as an inside border. 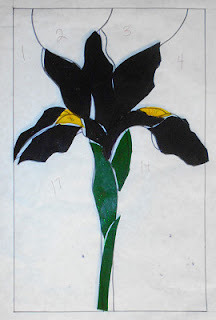 Tracey now has her second Cardinal Window all ready for solder.  She tacked together her window, re-cut the green leaf that she was unhappy with, added a thin accent border cut out of a beautifully textured clear glass, tacked that into place and then got her final green border cut, ground and attached.  Whew!!!!   Tracey has taken this home with her where she hopes to get at least the front side of it soldered so she can possibly get this completed when she comes back. 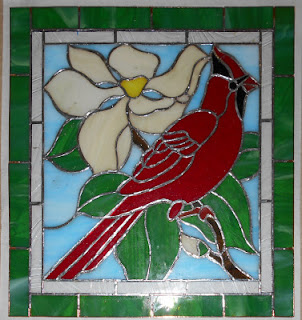 Becky B has decided that she's going to make a few suncatchers before working on any windows and this week she's started working on this cute Frog.   She plans on making this a lawn ornament and we'll see how it all takes shape in the weeks to come. 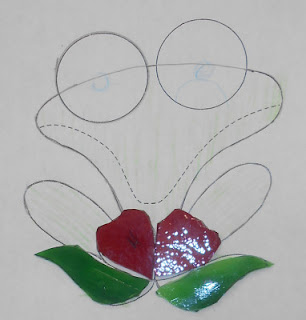 Melissa is so very near completing the wrapping phase of her Autumn Leaves window that I think I can safely say this this will be tacked together when she returns.   Once that's done she can work on fill-in pieces and then get a border cut out. 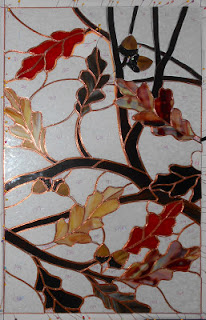 Susan D is not only making Tree Of Life Windows, she's also making leaves by the dozens for her latest Garden Flower Cornucopia.  here you can see what she got wrapped and soldered during the remainder of her class this week.

Rowena is about to embark on a project that I think will be watched with many eager eyes  throughout the weeks to come.   It's a stunning pattern that will involve a little bit of some kiln work to really flesh it out.   Like the Tiger in the picture, Rowena is up to the challenge and raring to go on this! 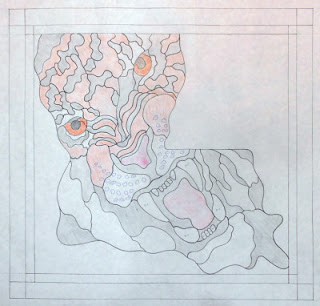 Lastly Carol has started a Noir Woman's Face Window and she's making fast progress on it.  She's going to fuse lips onto the face and paint the nose on with enamel.   The face is ready to be fired and next week we should see it in cut and ground into place.  The only reason you aren't seeing it this week is because I never took a picture of it!  It looks very much like the first image you see in this post though so scroll back and take a look!