When deciding where to put breaks in your borders you have to plan ahead.  We normally divide the borders on each side equally which means that the top would be split the same as the bottom, and the left the same as the right.  If your subject cuts into the border you have some choices to make.  In the picture below, breaking the top border evenly results in some small pieces near where the steam comes out from the window and into the border. 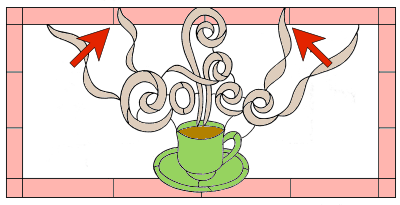 I usually omit lines if they are close to where the border would normally be broken.   This would result in the border below. 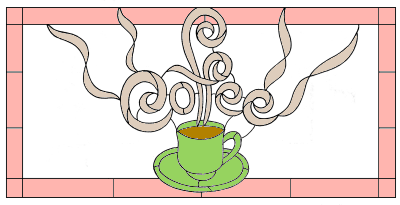 There is no official right or wrong in these cases.   It's solely dependent on what YOU think looks good.   While making your pattern mark it one way and then the other to help you make your decision.  Rest assured though-- the viewers eye will focus on the subject matter and NOT the breaks in the border.  Only you will notice that.


Okay now, up first is a variation of the pattern that we just talked about above and you can see that Sheri did, in fact, omit two of the lead lines in her border.  The central breaks were left in so that the other two pieces didn't appear to be too long.   We played around with omitting those as well but in the end we decided it was best to break the longer border strips.   No matter, the work that Sheri did on this entire window is wonderful and you can almost smell the coffee. 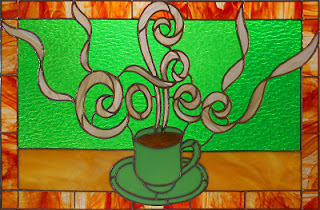 Becky B finished her Frog Lawn Ornament and finished it off with a wire mouth and some painted pupils on the eyeballs.   This pattern started off as a night-lite but Becky decided to make it bigger and mount it on a stake for her yard.   As I always tell our students, anything can be a Lawn Ornament! 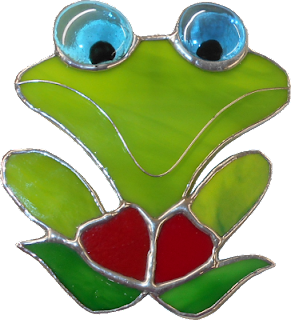 I don't think that we've seen many Oil Wand Kaleidoscopes in the past few years but Susan R saw one that I made for a show that we just did and just HAD to make one!   Of all the stained glass kaleidoscopes that you can make this is the one that provides the best image because it's ALWAYS different and it never stops moving.  I've included a picture of what you see when you look through this, but it doesn't do it any justice at all since it's a still image. 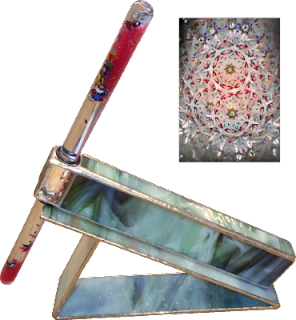 Cindy put the finishing touches on her second Kaleidoscope Airplane and it's another winner.  I think that this is the last of the Aeroscopes for a while now, but Oil Wand Scopes and Traditional Kaleidoscopes will still be featured here over the next few weeks.  They make wonderful Christmas presents. 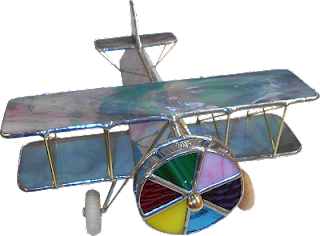 Up next we have three projects that just needed a little work left to go on them before they were completed.   I won't be able to photograph the finished pieces but I've asked everyone to take pictures of them once they are completed.

First we have Lara's African Woman.  With the front side all soldered and only the back side left to go I'm going to miss not getting to see this with some light behind it.  Even pictured sitting here on the work table it's looking awfully fine! 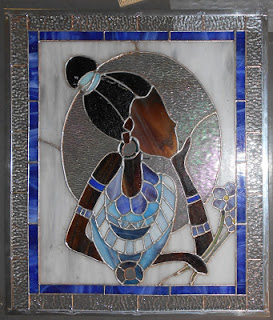 Next we have Melissa's Autumn Window.   This one only needs to be washed and colored (adding some patina to the lead, that is) before Melissa can deliver this to her friend.  Like the tree of Life that Susan did a few weeks back, this has the perfect border color for a Tree Window. 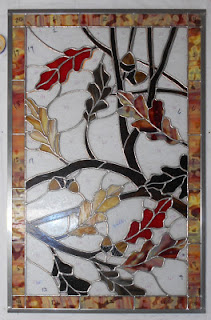 Carol has been as busy as can be as she ALMOST completed 3 Butterfly Lawn Ornaments this week.   The only thing left to add to theses are the bodies that run along the length of the center.   Carol made quick work of these and they each look lovely. 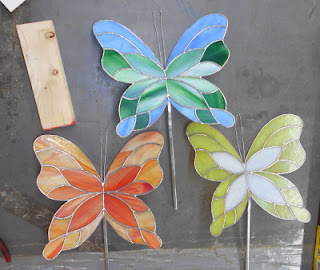 Even with a huge majority of her window being un-ground, Rowena's Tiger Face/Louisiana Window shows a fierceness that can't be ignored.   The pieces are merciless to cut and grind but the finished piece will be an incredible jewel in Rowena's stained glass crown. 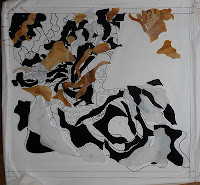 Mary's working quickly through the cutting process of her Santa Window.   Last week we had decided on some green glass for some of the background but we were clearly not thinking this through.  Luckily Mary did while she was home last week.   With snow on the ground there wouldn't be any green-- so Mary will take the white snow right up to the horizon on this window.  Looking good indeed!

Speaking of Santa's,  Cindy's Santa Face Window is fast approaching completion.   When she left last week she only had the hat cut out.  This week it's all cut out and she's got probably 95% of it ground already. Talk about moving along!   Santa will be hopping down a chimney before you know it. 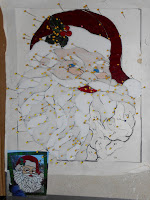 With the front side of her Rose Window completely soldered, Jeannette has taken this home to work on the back side and then she'll bring it back in for some patina and hooks.  Look to see this window completed real soon now!

Linda F has a lot of her Tree Of Life Window soldered now and hopes to get the majority of it done while she's at home.   With the leaves made up entirely of scrap glass Linda has discovered a GREAT way to clear space in her stained glass workshop AND end up with a wonderful window! 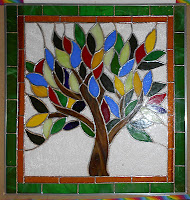 Susan D got the body of her Traditional Kaleidoscope put together and she was able to get the mirrors installed as well.   After that she worked on the first of the pattern wheels and even has the glass cut for the second, clear wheel.  It won't be long now until this is spinning in circles. 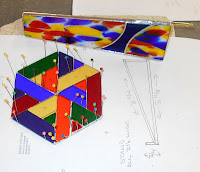 Roy is moving along nicely with his LSU and Tiger Paws Window.  With the majority of the subject matter all cut out and almost ground, Roy only needs to tack these pieces together before he starts adding the multiple borders that will be cut using the strip cutter.

Linda L's Mickey Window looks like something that was printed out!   Her grinding is perfection and her colors are nothing short of vibrant.  This is going to be spectacular and I know that because it already is.  Happy Halloween indeed! 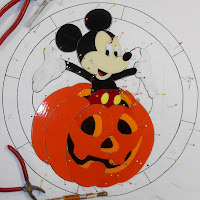 Mary Grace made adjustments throughout her Birds and a Birdhouse Panel and everything is rock solid now.   I have no doubt that this will be completely tacked together and have a border attached when you see it again. 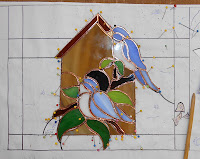 Angie's Mermaid Panel is just about finished even though we've never seen it before.  She came in with all but three pieces ground and fitting together wonderfully and only stopped three pieces short because she wasn't sure how to fit the 'bubble' that the mermaid is looking at.   We covered that small issue and the next thing you know Angie added a border and soldered the front side! 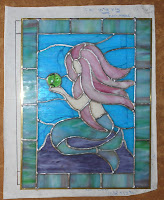 Martha ground the flowers and the branches for her Pair of Cardinals Window and she's doing a bang up job on it.   She's using one piece to mark the other as she grinds and is flying through her work while making perfect fits as well. 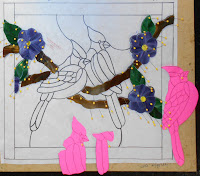 Shelley is wrapping up the grinding on her Once Upon A Time Window.  She'll need to wrap this and tack everything together before she can cut the face out (which you can see atop the window) but that won't take long at all! I can't wait to see this all come together!

With MiMi working on all of the thin clear trim pieces of her Industrial Fleur De Lis it's hard to tell what she's achieved this week.  Trust me though,  there's been a lot accomplished.  Look closely and you'll see a thick line of copper running diagonally through the center of the Fleur De Lis.   Believe it or not, it was a clear piece of scrap glass that MiMi wrapped completely in copper foil after fitting it into place.  Now that it's foiled MiMi saw how things are going to go together on this interesting window. 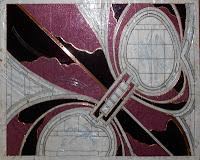 Betty is back and I was so happy to see her that I was eating the wrappers off of candies from foreign lands!  She was so happy to be back that she started working on another Mary and Child.  Will it be a suncatcher or a panel?   Even I don't know that but I'm leaning towards thinking that it will be a suncatcher.  I'll answer that question when we next return. 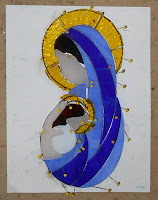 Wow, Beth cut out her background, ground all of her pieces, and then wrapped them all in one class!  And everything fits together wonderfully!  Color this iris purple and me impressed!

Well, it's official.  Tracey's latest Humming Bird has been completely cut out.  This week she was even able to start grinding a few pieces.   I do have a funny feeling that as beautiful a window this is, she's going to be over Cardinals by the time this one is finished. 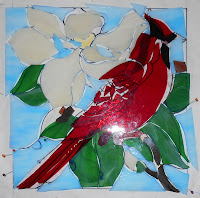 This week Barbara started work on her version of the Santa Window that Mary is also making.   She's pretty much at the same point that Mary was at after a day of cutting glass so I'm expecting this to take shape quickly.   And, of course, seeing Mary's window will certainly inspire Barbara.

We're going to end this post looking at the patterns that two of our students are about to start cutting glass for next week.   First we look at the round Magnolia Window that Becky B will be working on upon her return.  It's always been stunning and I have no doubt that Becky's will be as well. 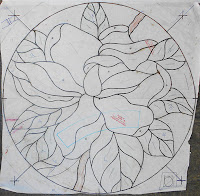 And lastly we take a look at the circular Butterfly Panel that Sheri traced out this week.   She's already thinking about colors and we will surely see some cut glass placed on this pattern when she returns. 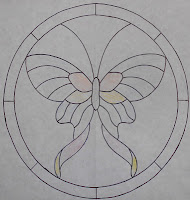 Well, it will be a while before you hear from us again as we are shutting down for two weeks.   Don't fret though as we'll have a post up when we return to classes and fall back into the swing of things!