It's been a busy week so we're going to dive right on in to all of our completed projects starting with Kerry's Geometric Cross Window.I've got to hand it to him, it's hard to believe that this is his first window with us!  There's a wonderful flow of symmetry here that's usually hard for new students to attain.   Also, the colors compliment each other wonderfully allowing the design to come through without having dark or washed out areas.  Next up for Kerry is a Ukulele window. 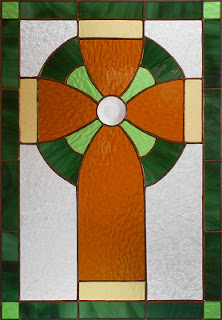 Brenda's Salon Woman is finished!   She's done excellent work on it and really deserves a lot of credit for pulling off those letters (and numbers) so perfectly.   Text is always an issue but when you add scripted text it's even MORE difficult  because the writing MUST look neat.   These letters (along with the rest of the window) really stand out as you can see in the two pictures below. 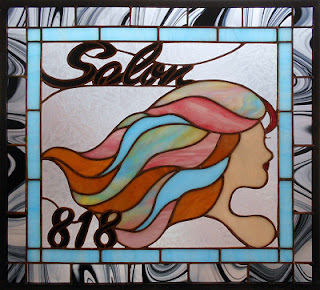 Here it is at home in its window! 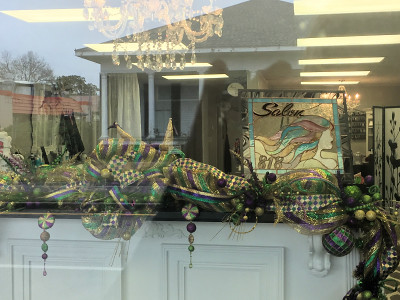 Angie was productive while at home as she turned out another Heart/Rose/Cross window and an Apple Window that will be a gift for a teacher.   When she came in the only thing she needed were channels and a border for the heart window.  After soldering the back sides she completed them both before it was time to head back home. 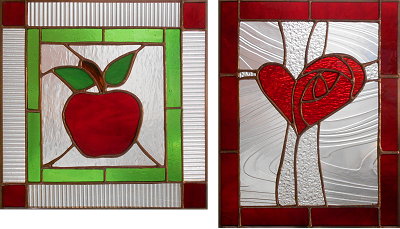 Jeff completed the panel that he started working on a few weeks ago and did a fantastic job on the soldering as well as the cutting and fitting processes.   This is one of 12 panels that will fill in a window with different pictures revolving around weather/seasons themes.  You see another panel this same size that Jeff is also working on a little further on down below. 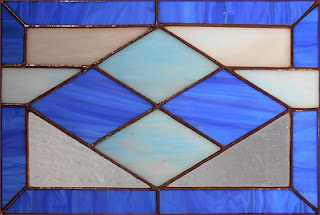 Martha's Pair Of Cardinals Window is finished and turned out spectacular.  Her stained glass skills are putting Martha on the top tier along with our most accomplished students.   All those little pieces didn't intimidate her and she never once said the words I hate the most: "That's close enough." 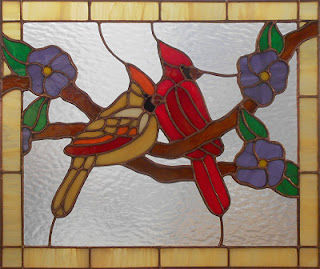 Carol worked on hand mirrors this week and dressed this Geometric Hand Mirror up by putting a piece of mirror in the bottom diamond rather than a bevel.  This one went together easily for her but the second mirror has far more pieces in it (as you'll see later on).  Still, I have no doubt that we'll look at that one in its completed form next week. 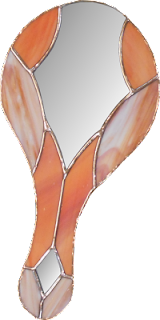 Jeannette made this festive Mardi Gras Suncatcher, the first of many that we will be seeing.  I've passed out a few variations of Mardi Gras Mask patterns so be aware that this is the start of more to come. 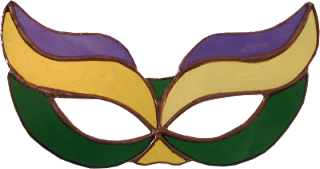 Tracey got her Eagle/Flag Window completely soldered this week, front AND back!   I don't think she had any idea at all that she'd be taking this finished window home with her when she walked into class but here it is hanging with some light behind it and looking GREAT! 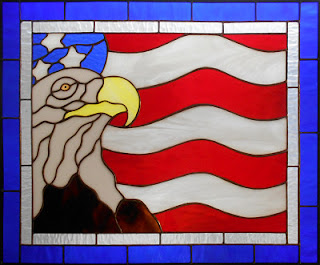 Rowena was a VERY busy woman during the week!   Here are just four of 6 completed projects that she walked out the door with.   The Doves are suncatchers but the Easter Rabbit and Butterfly are Lawn Ornaments.   She also had two more butterflies but she decided to wash them at home. 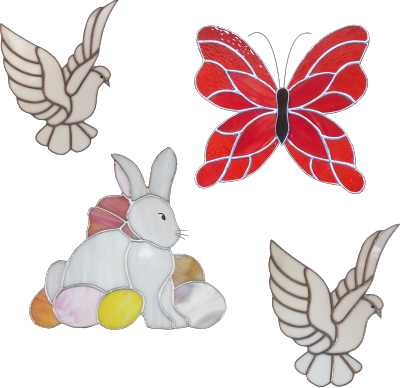 Brenda didn't just finish her Salon window-- she also put the finishing touches on this clear fancy cross complete with bevels.   And she also had enough time to let the black patina that she used sit on this piece for the full 45 minutes.  Black patina ALWAYS looks great on clear windows! 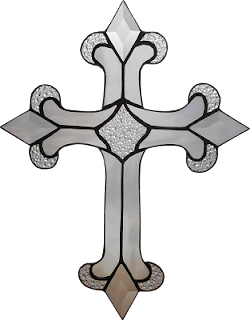 We also got to see Sheri resume work on her Traditional Window and the colors she has picked are striking.   Rather than go with a simple color scheme Sheri is adding different colors in and throughout which will make this window really stand out.  As you can see, it already does.

MiMi has started cutting glass for her newest window,  Dog in a Life Preserver and Snorkel Gear!   Yeah, yeah, you've see this window made a thousand times but knowing MiMi this is the one that will REALLY stand out in that crowd of geared up dogs! 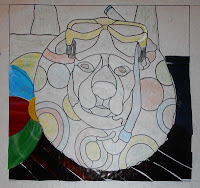 Cindy made an impressive amount of progress on her Traditional Art Nouveau Styled Window. Everything has been cut out and most (if not all) of it has been ground.   She says she's having fun making this one and that always makes things go quickly.  Cindy even has her next project ready to be drawn up!

Terry is making a flower window utilizing some very striated baroque glass to give the flower petals an extra bit of realism.  This will be  another unique Terry Window that will be turning heads for sure and since the subject is all cut out already I doubt it will be long before we see her moving on to something new.

Up next is the second Hand Mirror that Carol is working on.  She's got it all ground and now that the mirror has been cut it's ready to be tacked together and soldered.

Jeanne M 's Geometric Window saw a lot of work happen this week and it all started with her tack soldering the center together.  She decided to use 8 bevels in the border so we cut her border glass into  one and a half inch strips and then filled in the spaces between the bevels with pieces of these strips.  Once everything was skimmed on the grinder she wrapped her pieces, tacked it all together and finally added a small zinc channel around the perimeter of the window.   Jeanne will be putting a finished solder bead on this when she comes back in! 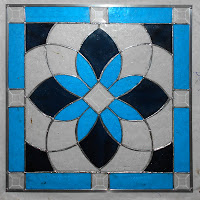 Lara's Deer Window is mesmerizing.   I know it's hard to see in the tiny picture below but with just 2 weeks into this project Lara appears to making a window that everyone is talking about.   Wait until you see this lit up!

Jeanne L was busy, busy, busy grinding on her Hummingbird Panel.   Usually panels are quick and easy but even though Jeanne's panel is only 11 x 11, it has a ton of little pieces in it.  We all now how tricky tiny pieces can be but Jeanne is taking her time and getting everything to fit together perfectly.  With just one flower left to go and some big background pieces she's well beyond the halfway point on this project. 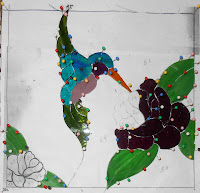 Jan is so full of energy now that she's retired and attending morning classes that she's setting records when it comes to speeding through projects!  With all of the glass cut for her Jessie Tree Window she has started the grinding process and as you can see, the bottom left side of this is really coming together already. 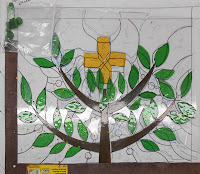 Susan R's 1920's Lady has a nice bead of solder on the front side and it's ready to to be flipped on over to its back side to complete the soldering process.   There's a great chance that we'll see this finished next week and I can't wait.  Imitation is the sincerest form of flattery and someone has already asked me if this pattern is available.

Jeannette came in with everything that she had promised to do on her Mardi Grass Window  completed.  She got her border attached and she's now working on soldering this.  I think that all this will need is a channel and some hooks attached when she comes back in.

This week Shelley spent her time grinding away on her Dragonfly Window after getting all of the background pieces cut out.   Her color choice is wonderful (the blue sky won't be as dark when it's up in the air) and this window is really shaping up to become one of her standout pieces.

Melissa has all of Mary's veil cut out but she has to grind it all before she can work on the bottom of Mary's face since she'll be fusing the lips on.   When you fuse glass it tends to shrink so we can't actually cut it until the lips have been position and fired into place.  There's more to it than that though and we'll explain all of it in the weeks to come.

Jeff not only finished his first panel, he also got the backgrounds cut out for two of the cloud panels that he began working on last week.  He's about to start grinding these and with the first panel out of the way I know he's got a huge boost of confidence which will help him fly through these two windows.

Mary Grace got all of her pieces wrapped in her Eagle Flag Panel and then she tacked everything together.  After soldering the front side she's ready to begin working on the back side which will give her a finished window when she comes back in.  It's a wonder that she got this all accomplished considering the fact that she and I were super-glued together for a while during glass.  Talk about being stuck on you! 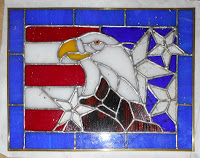 Patrice worked on soldering her Ragin' Cajuns Window after she got her channel attached and by the end of the day she had the front completed and had flipped her window to start on the back side.  She won't be in next week but when she does return I know that this will be a featured finished window of the week. 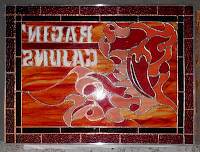 Betty was as busy as can be making not one but two of these Cross/Heart/Rose Panels.   By the time class ended Betty had borders on both panels as well as the final channel.   The front sides were each soldered and then Betty even got the back sides soldered as well as hooks attached.   These would have been finished but she's coloring them with black patina and she just didn't have the time to let the sit the 45 minutes we like to leave the chemicals on the lead.

With just some Iris leaves left to cut Becky S is just about ready to work on border for her long tall Egret Window.  Even if she doesn't have the glass for the leaves we'll still be able to tack this and either begin soldering it or adding borders.

Barbara H now has all of the pieces that she had ground for her Santa wrapped and tacked together.  With everything all stabilized she'll be able to re-cut her missing pieces and handle the face without all of the rest of the pieces sliding around.  This is getting close to completion now and I know Barbara is anxious to move on to something else.

Remember all of those completed projects that Rowena had way up at the start of this post?  Well here are the two other butterflies that she completed but didn't get time to wash and wax.  As I said, she's been busy! 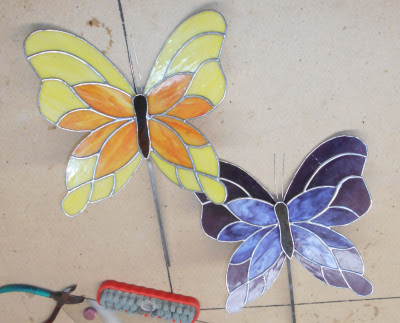 And in the end, Becky B is starting a new Magnolia Window and this is her pattern.  This will be a more traditional American Magnolia which is far more to her liking!

So there you have it.  Everything that happened in our classes during the second week of February!