That's What I Just Did In My SpecimenCup

While grinding many people know that they have to pay attention to the water level in the grinder but did you know that if you have a sponge behind your grinding wheel that you need to pay attention to that as well?  I've tried the sponge-less systems but in the end I always put a sponge behind the grinder wheel of my Inland Grinders because I find that it just works better.   What most people who use sponges don't realize is that you have to rinse them out from time to time because they become impacted with glass which prevents the sponge from doing it's job.   Also, when adding water to the grinder put a little on the sponge as well.  Your grinder head will love you for it!

Okay then, Mary is another of our students who can work her way quickly through a project.  Her Rose Window is most certainly beautiful and the the dark green border that frames the bright flower and leaves was a perfect choice.   Everything from Mary's cutting to her  soldering is top notch work.  Let's face facts here- she's got it down! 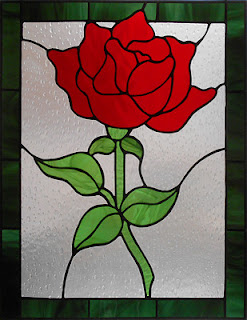 Cindy finished her beautiful Art Nouveau Window this week and boy, did she ever do a great job on it.  From the colors to the fitting of the glass, this is just one flawless traditional piece of work. 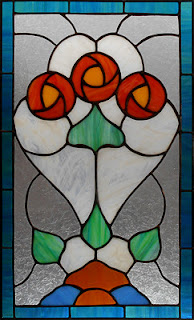 Mary Grace put the finishing touches on her Eagle/Flag Panel and then took it home to hang.   I was particularly impressed with the fact that she replaced the eagles feathers when she realized the color didn't suit her.   I always tell people that if they don't like something they need to replace it because it will always bother you whenever you see it.  In the end Mary Grace's Eagle looks fabulous. 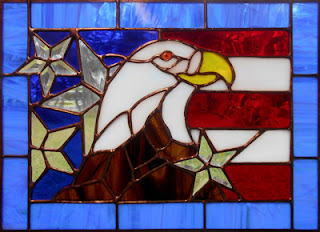 Tracey got her two Cross Suncatchers completed this week meaning that she more or less  completed  a cross a week.  These are stunning and the work she did on them is perfection.  I've made these in the past and posted their pictures on Facebook and the question I get asked the most is, "Are these 3D?"  And the answer is no.   The illusion works due to good workmanship and a perfect color choice. 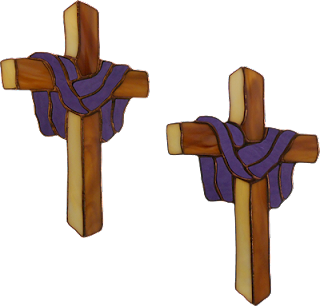 Angie got two more panels completed this week; another Fleur De Lis and a beautiful hanging flower panel whose pattern came from www.freepatternsforstainedglass.com (Thanks to MiMi).  Then Angie even found time to make a Mardi Gras Mask as well.  Look out because Angie is on a stained glass roller coaster of production! 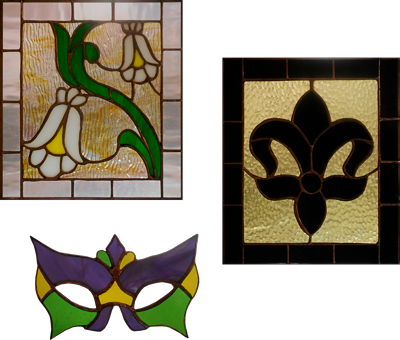 Terry knows someone who was working on a stained glass window and then stopped working it.   Well, Terry convinced her to bring the window in and between them they finished this project that without Terry would probably have never seen the light of day! 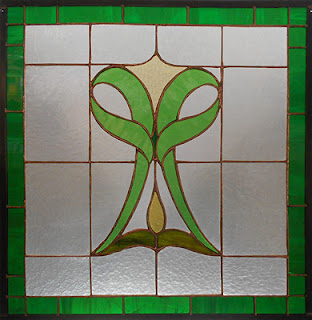 Rowena was as busy as a bee again this week completing a Butterfly Lawn Ornament, two Bee Lawn Ornaments, a Mardi Gras Mask, and a Sunflower Lawn Ornament.  She's really making headway on building up stock for that show she's going to be doing... 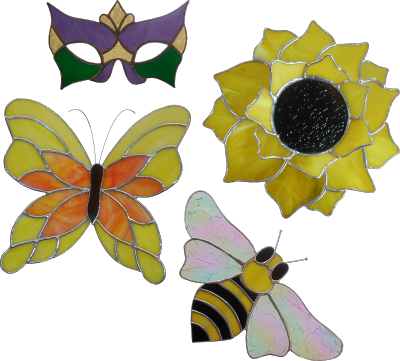 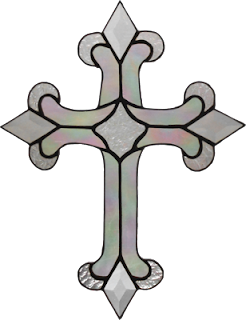 Becky B is cutting her way through her glass and making some solid progress on her latest Magnolia Window.   With the petals all cut out this week I'm sure that Becky will move along to some nice bright green when she returns.   The good news is that the line she needs to cut on will be much easier to see on the green glass.

Jeanne M has begun to work on a Blessed Virgin Mary Window and she's currently undecided as to whether she'll have Mary standing on a snake or not.   Right now she's concentrating on the other parts of the window and we'll she what she decides when I pencil something in for her next week.

Martha completed all of the grinding on her Peacock window this week and then moved along to the wrapping process.  Once the Peacock itself is tacked together the rest of this will go easily for Martha.

Cindy also started on a combination stained glass and faux mosaic Bird Window.  This is going to be interesting to watch come together over the weeks to come.

Melissa is making great progress on her Pieta Window however the fused pink lips changed color during the fusing process and her lips look red now.  Sooooo, we're weighing our options and leaning towards painting the lips on with enamel (which won't change).  For the time being there's plenty of glass left to cut so Melissa will work on the background while we sort this tiny situation out.

Sheri's Traditional Stained glass window looks better and better each time I see it.   Her colors are impressive and she's already begun grinding pieces.  In fact, she's cut so nicely that her grinding isn't taking any time at all.   She wants to get this to be a little larger so I'm going to suggest a three level border.  We'll see what she thinks about that when she returns next week.

Kerry's Ukulele Window is all cut out and he's already grinding it.  There are two parts of his ukulele that we will be using a glass saw on but that won't happen until all of this has been ground.  I'd much rather fit things together as best we can and make adjustments to the part we have to saw rather than the other way around.  And we'll go into detail on that once we get there. 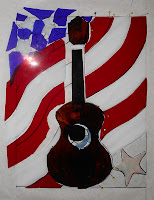 This week we got to see Terry start working on an American Flag window.   She plans on adding stars using white enamel paint and then firing them on to the blue glass in a kiln.  To do that she's enlisting the help of a Cricut Cutter to make a stencil of the stars.  And perhaps that will be covered when she comes back in next week. 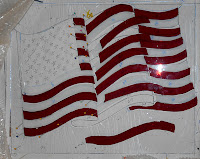 Susan R is making a three dimensional Hummingbird and in just one class it's been cut and ground.   That means that  once it's wrapped, this will be ready to be assembled. 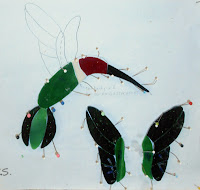 Linda F began working on an Rectangular Abstract window and although she got everything cut out in just one class production is about to slow down on it because Linda will be taking a 'break'.  Knee surgery will be keeping her out of class for a few weeks so we'll just have to wait and see how long it takes for her to feel good enough to come back in.   We're all hoping that she feels better real soon!

Lara has the majority of her Deer Window cut and ground leaving her with just four pieces left to go.   I have a sneaking suspicion that we'll see some borders on this when she returns. And I have to say that this is looking so good! 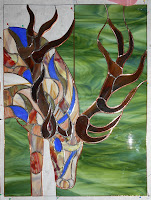 Roxane got a lot accomplished this week as all of her glass is officially cut for her Penguins.   She's moved on over to the grinding portion of this project so it won't be long now.  I just noticed this morning that she had send me a text message asking of she should change the sky to a clear glass but after looking at it again I say no.  I think this looks much better with a blue sky and white snow. 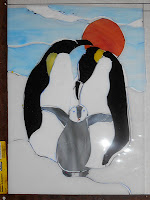 MiMi is moving quickly and cutting so perfectly that her window practically looks ground already.  With all of the colorful background cut out MiMi will move along to the snorkel and Oakley's face when she returns. 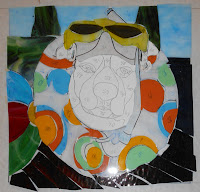 Linda L has 2 bird suncatchers all cut, ground, wrapped, and tacked together which means that next week these will be out the door and ready to hang.  She's toying with the idea of making the beaks out of solid lead and I think that would work out well.   We'll see what she decided on when we return in or next post. 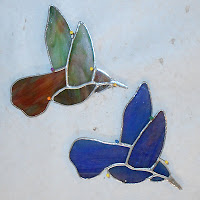 Betty's got the bevels for her version of the small Peacock Window all tacked together and she's got the background glass cut and ground as well.  I'm thinking that this will be finished before you know it!

Upon finishing her Eagle/Flag Window, Mary Grace resumed work on her long tall Flower Window.  Her cutting has never been better as you can see by examining how nicely her flowers fit together before they've even been ground.  It looks like leaves will be cut next.

Patrice is so very close to finishing her Ragin' Cajun Window that I can guarantee that it will be completed upon her return. With the back side soldered and looking good she only needs to go over the soldering on the front and then wash, color and wax it, before she moves along to another project. 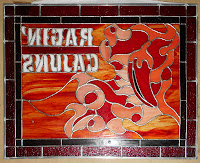 Barbara H has her Santa Claus Window all together and is now working on her borders.   In the end she picked a clear iridised glass for the thin inner border and then once that's attached she'll finish it off with a wider border made out of the same glass that she used for the sky.   Santa has a blank expression right now but once this is completely finished we will paint his eyes on. 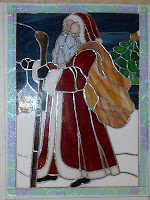 Shelley is almost finished grinding her Dragonfly/Water Lily Window which means that she'll soon start wrapping her pieces to prepare for solder.   I have a sneaking suspicion that it won't be long now until this window is finished.

Becky S is so very close to getting borders cut for her window that we actually picked the glass out and almost started cutting out strips.   In the end we're going to wait until this is tacked together because jumping ahead could easily make the border not line up perfectly which would be a shame since everything else about this window is perfection.  Look to see at least the first border put in place one week from now.

Finally,  Jeanne L  managed to run out the door without me managing to get a picture but she's ready to tack her humming bird scene together.   It looks as though she'll be able to cut out her background glass upon her return.

And then there's Jeff who had to leave while I was out of the shop.  I may not have a picture of his weather panels but trust me when I tell you that they are looking great.   He's shown me his idea for his next project and if you ask me he's going t be one of those students that everyone else pays attention to as he picks and makes his patterns.