It’s a Metaphor, Not a Simile

Since this was a Mardi Gras Week I'm running more than a little late so let's just jump right on into the thick of things here starting with  Patrice who  put the finishing touches on her Ragin' Cajuns Window, and it really did turn out to be quite impressive.  There's a lot of red and orange in there but that's the way the logo looks and that means that Patrice has rendered this window perfectly. 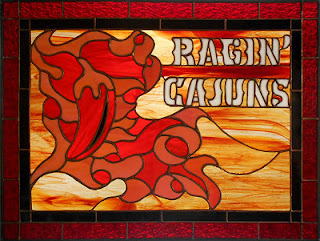 Jeannette finished her colored bevel window which has everyone saying, "I didn't know you could get bevels in colors!"   Well, the selection is limited and sometimes the wait for them can be long but as you can see, yes, colored bevels ARE available and they can look great in a window when used with correlating colors like Jeannette did. 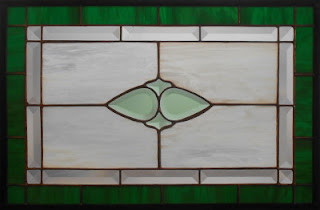 Patrice also cut out and ground these two Fleur De Lis Mardi Gras Suncatchers.   They may be made out of two different color schemes but they both say Happy Mardi Gras equally as well. 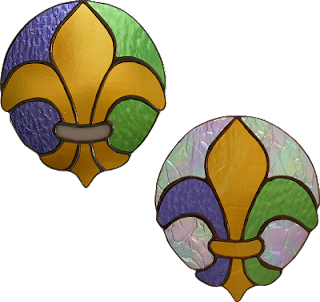 Rowena also liked the Fleur De Lis Pattern but she decided to make her out of Saints Colors.   Then she made two Easter Bunnies to 'even things out'.  She even added little wire whiskers to the rabbits which make them look so much better! 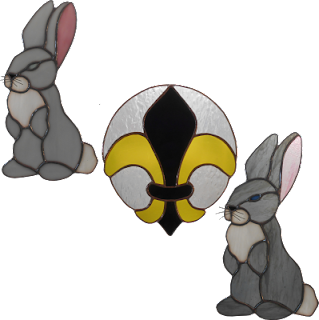 This week we also got to see Susan R finish the three dimensional Humming Bird Suncatcher that she began just last week.   It hangs perfectly (sometimes the balance can be tricky) and hopefully this angle of the Humming Bird shows you just how the wings protrude from the body. 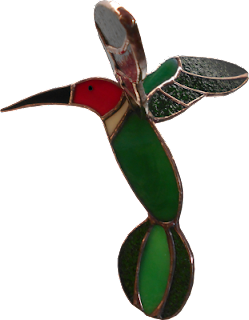 Speaking of Birds, Linda L made these two Bird Lawn Ornaments both quickly and efficiently.  These showed me just how well she has mastered the art of applying solder to the sides of a suncatcher. 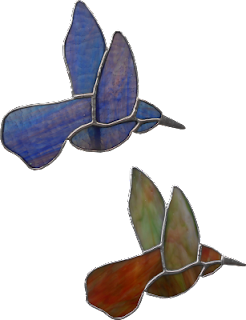 Last in our completed projects we have Terry's four Crystal Hanger Suncatchers.   They're simple enough to make but if they aren't perfectly symmetrical they'll hang crookedly.   These are a great way to put to use all of those old light fixture crystals that almost everyone has in a drawer somewhere! 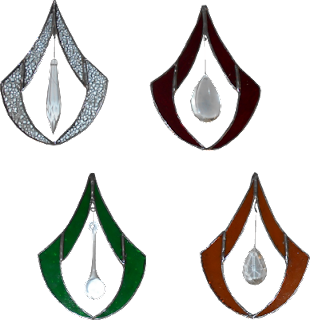 Angie's been telling me about the Swordfish that she's been working on at home but this was the first time I got to see it.   It was all ready to be soldered save for the two borders that she wanted to add.   While she was in class she got the first one attached and the second one was very close to being completed as well.   We'll surely see this as a featured finished window next week!

Susan D never met a small piece that intimidated her and this little Leprechaun proves it.  Even though she's enlarged numerous pieces on the face, this little guy would intimidate a good 90% of our students! 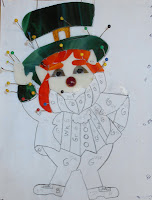 Linda L also worked on her Mickey Mouse American Flag Lawn Ornament. There's no mistaking what this is and even better yet, it's hard to tell what is represented more, Mickey Mouse or the American Flag.  Who'd have thought that a mouse could be so patriotic... 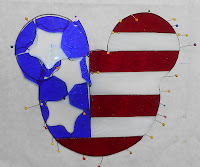 MiMi now has almost all of the cutting finished for her Dog In A Life Preserver Window.  She's taken it home with her to work on during the week so there's no telling what this will look like when it comes back in-- and I say that in a GOOD way! 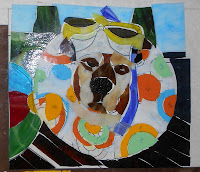 Sheri is about to work out a border system for her Traditional Stained Glass Window since she's cut and ground just about all that there is to.  She'll already begun the foiling process so after this gets tacked together we'll see what she decides to do.

Melissa is having a second go at Mary's lips being fused on in the kiln and we really think we have the lipstick issue solved.   We'll know for sure in one more week when the kiln is fired up but until then Melissa is working on the background pieces and now this window is REALLY taking shape.

And look, here's Mary yet again!   This one is being made by Jeanne M and although it's hard to see, she got all of the white glass cut for Mary's robes.  Next up she'll cut out some blue glass and we'll see which blue she picks upon her return.  After that it's just the simple sky so she's doing great on her second window with us.

Cindy's Faux Mosaic Stained glass Window is looking WONDERFUL!  In fact, it's looking even better than I imagined thanks to her careful color replacements along the way.  This is going to look GREAT when it's lit up!

Mary Grace is making excellent progress on her Long Tall Flowers Window.  It's looking like we'll be discussing the addition of an accent stripe upon her return.  Once she decides what she wants to do there she can start cutting her background glass.

Kerry is just a star and a circle away from wrapping his Ukulele and American Flag Window.  I'm not sure about the exact number of pieces left to grind but I believe it's under 10.  Also, we'll be using the glass saw to add the bridge of the Ukulele so that will be fun because all of the students want to see the ring saw in action.

Betty's Peacock window is all ready for solder and her Easter Hat panel is all set to be tacked together.  Betty will add a background and a border to the hat thus changing it from a suncatcher to a window. 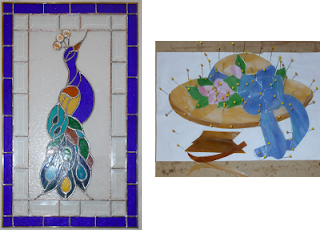 Becky has changed the flower on her Magnolia Window this week so the pattern that you are seeing under the glass really has nothing to do with what she is making.   After she tacks the flower together she'll be changing up the pattern and deciding if she wants to add any leaves to this flower or not.

This is Martha's version of the Peacock Window and you can see she went with a simple blue, green, and teal color scheme.   She's got a perfect mix of Blue/Green for the final border and we'll get to see how that looks when it's attached next week.  Wait until you see what a difference the second border makes.

Jan is on the last quarter of her Jessie Tree and once that's done she can relax and spend time foiling her glass.  I have to say that her grinding has come a long way and that I really think she'll love this window when it is finished. 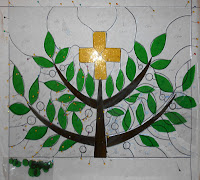 Jeff's got one cloud panel finished, save for the washing and coloring of the lead, and a second cloud panel just about ready for solder.   Next the clouds will part and he'll be working on a sunny sky or two. 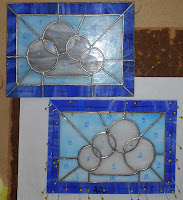 And Roy's Cane Field Window still makes me jealous.   He's got his pieces almost completely ground and as you can see by the number of pins that he's used, wrapping won't cause this to expand because the pins have left room for expansion that the foil creates.   Having wiggle room is VERY important when you work on a window with a lot of pieces in it and Roy has avoided the expansion problem completely due to his use of pins throughout his project.

Lara's Deer Of Many Colors is all cut out, ground and almost completely tacked together.   With just the final border left to be wrapped and tacked, this window will be done before you know it.  She's taken it home with her and hopes to start soldering this there! 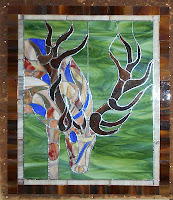 Speaking of borders, Becky S has got her first border just about ready to be attached on her Egret Window.  There's one more left to go after that and then she can relax and solder. And, like Lara, she's taken this LARGE window home with her to hopefully get some work done on it during the week.

Terry's got a Flag Window well started because at this point, just one week along, she's got it all together save for the blue star section.  Alas, Terry has been with us for 10 years and has made  the tough decision to graduate and work solely at home.   If anyone can handle it, Terry certainly can. We will surely miss seeing her on a weekly basis but friendship lasts forever. 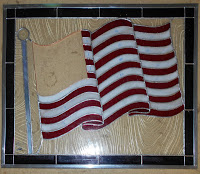 Shelley's begun wrapping her Dragonfly and Water Lily and once that's finished with she can tack this together and fill in the two missing pieces of the Water Lily.   She's also taken it home with her where she hopes to find the time to get the foiling completed.  No matter what her progress at home, a border will be happening real soon now. 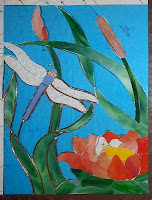 Santa has his border going on!  This is it, Barbara's Santa Window is all cut out and ready to be soldered.   This is yet another window that's gone home (do you see a pattern here?) so that if any free time comes up, Barbara will be able to focus a little on her window.

And finally there's Brenda who is also graduating from Stained Glass 101.  She cut out a new cross suncatcher and will easily finish this at home.  Again, even though she's leaving us I know that she is more than capable of doing the work at home in her spiffy new stained glass studio.  We'll certainly miss her though!

And that wraps things up this week.  We'll be back (on time) next Monday with a tip of the week and a slew of new pictures of the latest work that our students are offering.