What is Jungle Love?


The biggest flaw I see, time after time, involves the speed at which students work.  Students plow through the current chore at hand thinking only of getting to the next phase of the stained glass making process.  For example, cutting glass takes time and precision, not haste and inaccuracy.  Most of the stained glass making processes involves following a line and to follow that you line you NEED to slow down.   I move at a steady snails pace when cutting glass and people always tell me how fast I cut without ever realizing that they move at 4 times my speed without regard for the line.  Moving slow and steady creates stunning stained glass windows.  Slow down, take your time, don't rush.  USE PINS!   It pays off in the end every single time.


So first up we take a look at Jeanne M's inspirational Virgin Mary Window.   She said she wanted it to look like something you would find in a church and that led to the fancy three layer border that adorns this wonderful piece.   Jeanne took her time, followed through from start to finish with determination and accuracy, and ended up with a window that anyone would be proud of making. 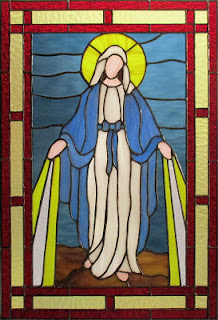 Kerry managed to complete his first of two Arrow Windows and I have no doubt that the second one will be done shortly.   Although the tail will be different the arrow is essentially the same and we all know that the second time goes quicker whenever you make a stained glass window.

Susan R's Garden Gnome Lawn Ornament could be the start of something.   People are always asking me what other Lawn Ornament they can make and Susan's rendition of this cute guy really sells the pattern!  there are a lot of tiny pieces in this but the end result but Susan persevered and brought this little guy to life. 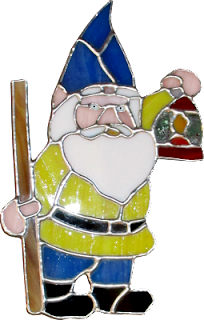 This is Rowena's first LSU Window that includes the Tiger Paws.   She started it just last week and here it is already finished.   People complain about working with the borders of this design but Rowena showed us what you can accomplish if you set your mind to it.  I do have to apologize for the bad picture-- I forgot to block the sunlight from the door so reflections are everywhere on this and the back lighting is terrible.  My bad. 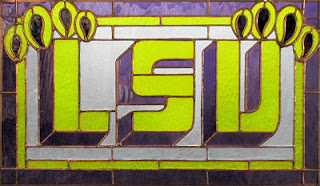 Tashia's Buxom Wine Ladies Window is about as sweet as you can get and she did a great job on it.  This was a great learning experience for her because she really got the hang of grinding to perfection while making this piece. She's already got two other windows in the works so she won't be slowing down any time soon. 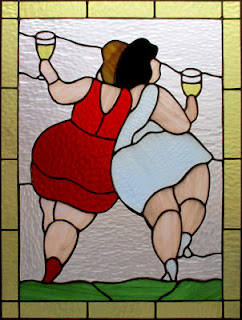 This is the latest Large Beveled Flower Window that Betty made.  She actually made a second one but I didn't get a picture of that one.  The Leaves of the flower actually rest on top of the beles lending a 3D effect to this pattern 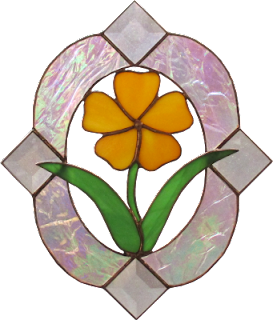 And this is Betty's Mary and Child Suncatcher.  She's really got the hang of this pattern now and knows that the truly hard pieces to cut in this are Mary's hand and the blanket.  Once those fit the rest is a piece of cake!

Now here's a window you probably won't see anywhere else.  Becky B says it makes her smile and I have to agree that it's different.  This three eyed fish actually originates from the TV show The Simpsons but Becky is coloring it her own way and making it her own.  They eyes look a little incomplete only because she'll be using glass globs for eyes and she needs to cut her glass to fit the globs rather than a pattern.

Belinda got her Christ and Holy Spirit Window almost completed this week.  She first tacked it together, added the green border, and then the final brass channel to finish it off.   The hooks are on it and the only thing left to do is to solder it.  Inspirational! 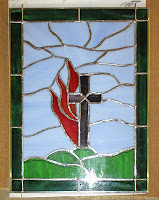 With his sunflowers and lady bug all ground and fitting together Jeff is now free to wrap and then tack these pieces unless he wants to cut out some of his background pieces first.  Most times I frown upon that process but there are times when it's perfectly acceptable to do-- and this is one of those times.  Since he's making this window in thirds and the main focus of this section has been completed, the next move is up to Jeff! 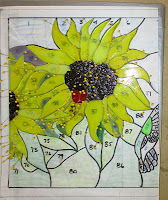 Melissa wanted to make something that could take her through the month of June but she's got the lion's share of this Heron Window cut out in just one week!   I love her pattern and the colors and I have no doubt that her work will follow suit. I have a funny feeling that this will be completed when I see it again.

Linda L started a new window this week and at first glance you might be asking yourself why she would be making a white shamrock.   If you look closely you can see that she also has the word 'CELTICS' cut out in white as well.   That sort of gives away the fact that this is a sports logo, thus the white shamrock.  Where's the green?  Well, the green will be the background which is a standard logo design trait. 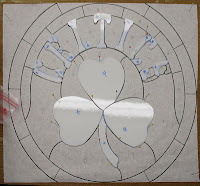 Shawn finished cutting out all of the glass for her Stylized Fleur De Lis Window which means that she's quickly becoming a lean mean cutting machine!  When she returns she'll be spending her time at the grinder making things fit. 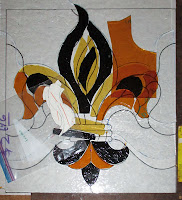 Check out Tracey's Cardinal Window!   With everything ground save for the tree I'd say that she's got this window well under control.   As I said in our last post, her flowers are beautiful and now that you can actually see them I have no doubt that you agree with me.

These are Martha's Tulips but this is what Cindy worked on this week.  Since Cindy is between projects she decided to help Martha by wrapping this window for her.   And it looks to me as though she's wrapped it all!

Here's a much better picture of the window that Susan D is making.  Although she doesn't want the face revealed you can now see how much time and effort she has just in the body of this man alone.  And let me tell you that the face is practically a masterpiece featuring tiny pieces that make me want to cringe. 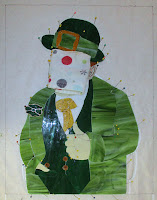 Becky is making quick work of her Egret Window and has moved onto the grinding of the feathers.  She's taped each row together into strips  so they don't get mixed up during the transportation of this large window.  You can easily see two of these  strips running across the sky and the lower leaves of the tree. As she grinds each piece she places them into position on the pattern itself.

Jan's Jesse Tree Window got its missing pieces filled in and then got its border attached as well.   Jan is ready to begin soldering this when she returns to class and that means that she'll be able to take her time and relax a bit now that the hard work has been completed. 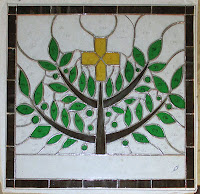 Lara's Peacock tail feathers are really coming together now that the inside feathers are beginning to fill in.  I know that the colors are hard to see but she's using two shades of purple for the remaining feathers.  This pattern always gets a great response through all of our classes and Lara's rendition of it already has people talking.

Linda F's Children in Rain Coats Window has been ground and now each of her pieces are being wrapped in foil.   There's one piece that she'll re-cut after she tacks this together but the majority of the hard work is behind her now and the soldering will be relaxing work. 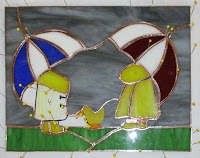 Annette had a very busy night as she tacked together her Pair of Cardinals Window and then filled in the pieces that got broken during the cutting process.   Now that everything has been completed she'll be ready to pick out a border color and then get ready to begin soldering.

Mary Grace finished cutting her few remaining glass pieces and then determined that a double border was the way to go with this Flower Window.  When she said she wanted something in a maroon or burgundy color I knew immediately what to pick for her thin accent color.   She loves it, I love it, and I'll bet you do too.

After getting all four of her backgrounds ground, wrapped, and tacked together Martha was able to get borders cut for each of her four Cross Panels.   She's on the home stretch now that all the glass has been cut. Soldering is just a class away. 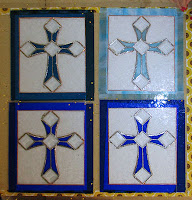 You could say that Mary's Cross Window is a much more elaborate version of one of Martha's panels.  The other similarity they share is that Mary got her border cut this week as well.   With everything tacked together and her brass channel added, Mary is all set to solder.  She's taken it home with her and hopes to get some work done on it there. 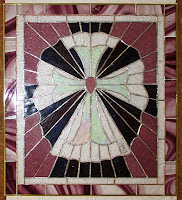 MiMi's second Ship in a Bottle Suncatcher is just about completed as well.   She was able to finish grinding her pieces and then got it tacked together as well.  Yet another job well done!

Carol spent her class time making geometric nightlights of a patriotic fashion!   These may look simple but geometric designs are notorious for being difficult to make because once you fall off of the pattern just the tiniest bit the symmetry is gone and the piece looks cockeyed.  These, however, are flawless.

And that wraps things up.  We're going to be taking a bit of a break because we are having no classes in the month of June due to vacation time and such.  Our students are a capable lot and I expect to see great strides when they come back in July!

Posted by Bayou Salé GlassWorks at 10:52 AM