Something About A Train

Well, Hurricane Barry has us very late this week (this should have been posted LAST Monday!) so forgive us for disappearing for two weeks.  We'll have another update later on this week but it will be very short in length due to the number of classes we had to cancel and also due to poor attendance since our students had issues of their own to work through after the storm/hurricane.  Rest assured that things WILL return to normal--  the sooner the better!

Our tip this week is actually a reminder for our students.   Please put your name on all of your tools using a permanent Sharpie marker and then cover your name with a layer of scotch tape.   People forget their tools all the time and we put them in a 'Lost and Found' box.   If your name isn't on your tools then you may not get the same tool back if someone mistakes yours for theirs.  Pliers, cutters, foil, scissors, solder, etc. all look the same so mark your belongings with your name!


Moving right along we start things off with Annette who has completed her first window with us.  So I'm just going to come right out and say it--this doesn't look like the first window that a new student would make, does it?   Well, Annette worked very hard on this high difficulty Cardinal Window but the fruits of her labors are readily apparent.   Also, she's amassed a wealth of talent by making something that wasn't easy to do.   Her grinding skills are already formidable with just this one window having been made with us! 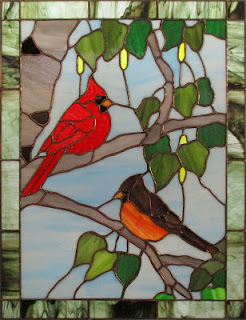 Linda F's Children In Raincoats was completed this week and her stormy sky perfectly sets the mood.  Alas, we had little light behind this when we took the picture since the weather has not been agreeing with us lately so it's actually a little brighter than what you see below.  It's as cute as can be though-- back lit or not! 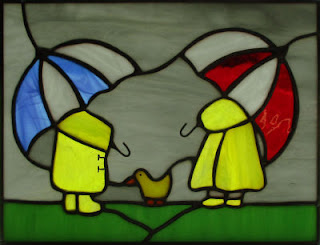 Jan made this Air Plant Holder Panel out of different pieces of scrap glass that she had laying around.  She's made these before and although people have asked about them Jan is the only student to have made any of these.  So far. 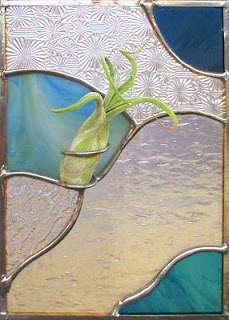 Linda F also put the finishing touches on her Abstract Study Of Straight Cuts Window.   This is another project that allows you to clean up some of the glass that has been floating around your work table for too long.  Although this looks easy let me remind you that straight cuts are the worst kind of cuts to made because if they waver in the very least it will throw off the entire project.  As you can see, Linda has achieved straight cut perfection.

Cindy made these two small hanging projects using glass that was donated to her.   The mirror on the left has a landscape scenery etched onto it and Cindy added a border and some hooks to hang it by.   The white portions in the suncatcher on the right also have etched patterns but try as I might, I could NOT get them to photograph!

Yep, Spinners are where it's at.  Carol is knocking out Spinners very quickly in an assortment of designs and sizes.  Once she make the first one and understood the concept she just ran off and made her own designs.  Bravo! 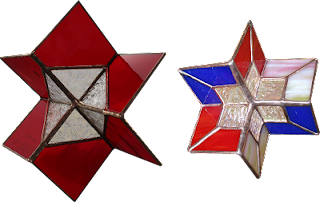 Betty is working on a Lily and Iris Window that she has all cut out already.  She's begun the grinding process and you might actually be able to see that she just about has that phase of the creation process finished as well.   This window will surely turn heads in a few weeks or perhaps, knowing Betty, even in just one week!

Belinda's Patriotic Horse Head Window is nearly finished as she got her border attached and then the front side soldered.  This window is her own design and I have to say that she's impressing me all around with her stained glass making talents. 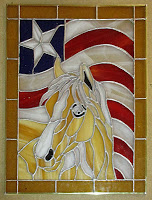 Linda L is making some fast headway on her multicolored Owl Lawn Ornament.   She's enlarged the pattern to almost twice it's original size but she's still able to use a lot of scrap glass to make this.  Everything you see has even been ground already so she's very near completing this.

Jeff's very close to finishing the first third of his large Summer Themed Window.   Once he gets the feathers in his Hummingbird cut and ground the rest will be easy because everything will be larger pieces of glass from that point on.  With a little luck we'll see more of this design unfold when we see it again. 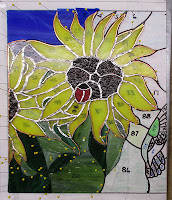 With her two borders now attached Susan D is ready to begin soldering her tribute Window.  Susan has been working meticulously on this project and that's always important when there's a face involved.   There's not a single piece off in this-- and that's something that's hard to say about a window. 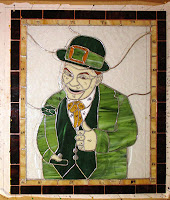 Making excellent progress indeed, we next look at MiMi's Seafood window.   She's moved along to grinding her corn and that means that she's nearly ready to wrap all of this so she can then control the positioning of her newsprint background glass.   This is really going to make people sit up and say, "Woah!  How'd you do THAT?!"

Shawn is mere pieces away from being able to tack her Stylized Fleur De Lis together and then adding a border.  Before she tacks it she'll end up re-cutting 2 pieces of glass which don't quite fit right.  The interesting thing is that we won't be re-cutting the obvious piece but rather the smaller piece. By enlarging it slightly we actually use less glass to fix the problem!  Remember that there is always more than one way to skin a cat (whatever THAT means!) 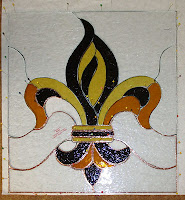 Mary Grace has the front side of her Flower Window all soldered and is ready to flip it over.  She's got her next project in mind and that always adds incentive to get your current project finished.   It won't be long now on this one!

Cindy's now got glass cut out and ground for her latest Birds On A Wire Window.   I've talked to her on the phone and she tells me that she's even further along now since the storm enabled her to spend more time working on this while at home.  I can't wait to see what this looks like when she returns.

Kerry's latest arrow is almost complete needing just some solder to finish it off.   I have no doubt that will happen when he comes back into class but before he solders it I'm going to suggest splitting the border pieces in half on the left and right sides of the window so they better match the top and bottom borders.

With the front of her Jessie Tree Window all soldered Jan is ready to flip it over and begin working on the second side.   I'm thinking that she'll have this one completed in 2 more weeks.  There's a lot of  soldering in this window but Jan's stepped up to the plate in all respects here. 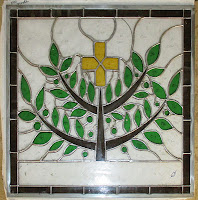 For some odd reason I don't have a picture of Tracey's Cardinal window even though I'd bet dollars to doughnuts that I took one.  My mind obviously isn't what it used to be!  And then there's Mary.  Her window would have been completed if I hadn't dropped it (I kid you NOT!)  It will be featured in our next update which will happen before the end of this week after I get the three broken pieces repaired.   Luckily it's going to be an easy fix.  So we'll end this post with one more tip:  Hold on tight to your window so you don't drop it!