With our power out for most of the week a lot of our classes had to be cancelled.   Then, when power returned, many of our students had things that needed to be taken care of at home so attendance this week was, well, weak.  However, that doesn't mean that we didn't get anything accomplished as you are about to see.

Mary's Cross Window survived an assassination attempt when I accidentally dropped it the week before last.   This week it's back together and finished as well.   As you can see the dark colors have, for the most part, disappeared now that there's some light behind it.    The cross itself is made from iridized glass which sets it apart from the clear glass that surrounds it.  The contrasting colors were perfectly picked and the end result is inspirational indeed. 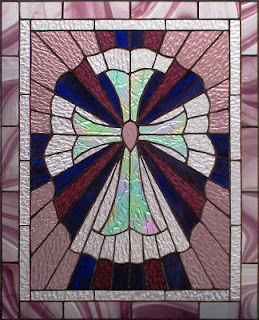 This is Jeannette's second 'Vette Window but this one has been done in a completely different color scheme.  With black being the color of the car it was the obvious choice for a border color as well.  Again, since this is the second time Jeannette has made this window, it went a LOT faster this time.  As always her work is wonderful and she has another stunning feather in her stained glass cap. 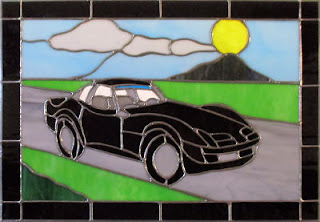 Kerry put the finishing touches on his second Arrow Window and started that by splitting the two border pieces on the right and left sides.   Once that was done we both agreed that it evened things out nicely and then he went to work soldering.   By the end of the night he had this completed and took it home.

This is Angie's 'Tiger Eyes' portion of her two part LSU Window which is now all ground and even halfway wrapped at this point.  This will be surrounded by a border and then another panel with the letters LSU in it will run beneath it and bordered as well.

This has to be one of the most interesting patterns I've seen yet.   Annette's 70's inspired Poodle Window involves a lot of pieces but as I always say, the more you put into a window, the more you'll get out of it.  Kudos go to Annette for not being afraid to tackle this multi pieced window as her second project. 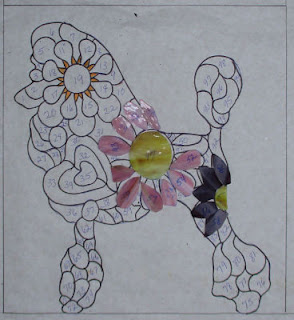 Jeanne L's Circular Rose Window has been tacked together and her four corners have been attached to square it all out.   With just two remaining borders to go Jeanne is very near completion on this project with all of the hard work behind her at this point. 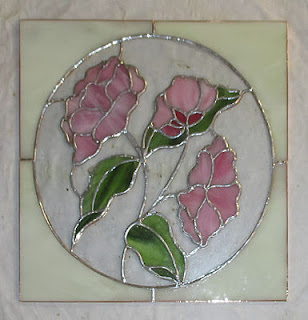 Jeannette got the borders attached on her Magnolia Window and then proceeded to solder it.  Her front side is almost finished and that means that the back side may very well be completed next week because this window is almost done. 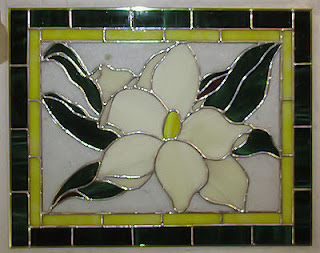 Shawn got her Fleur De Lis all tacked together and worked on soldering her window.   By the end of class she had both sides completed and only needs to touch things up at this point (and add some hooks to hang it by).   This will be a finished project upon her return. 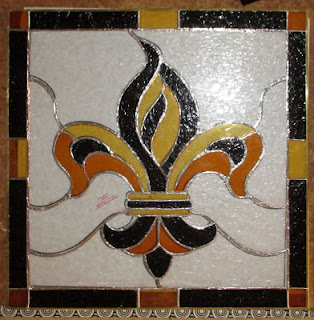 Lara is making great progress on her large Peacock Window.  As you can see she has most of the tail feathers completed and ground into place.   Once these tail feathers are tacked together Lara will work on the head and body of her bird.   I'm sure that will happen when we next see this. 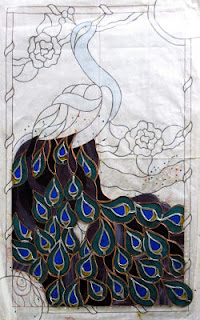 Rowena started working on some Mickey Mouse Suncatchers and got 4 of them cut out during class.  then she started grinding them as well.   I didn't manage to snap a photo so a picture of the pattern will have to do! 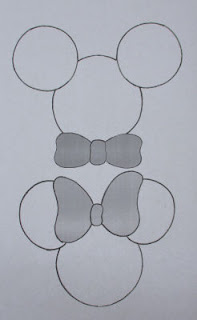 As I said, it was a very slow week due to the power being off for most of the week.  Still, as you saw, we managed to get three projects completed.  I think we'll have much better attendance in our next post as things slowly but surely return to normal.