The End Is Nigh Upon Us

We're still running behind schedule here as these projects are actually from two weeks ago.   Hopefully we'll get caught up soon.  So let's jump right into things here.

Carol's Three Owls panel is complete and looking as wise as ever.  Later on we'll see more birds in a similar pose but this is a first for these and Carol did a bang up job on them. 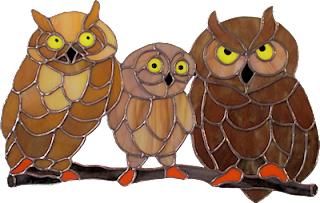 Bird is the word as Susan R finished her 3D Bird on a Leaf suncatcher.   She's going to put these (yep, she plans on making more of them) in her flower pots.   When you see this made again it will be in different colors and we're going to change the leaf that it sits on a bit to make it even more sturdy.  Sometimes you just can't be sure about something until you make it.   Not that this has any problems, we'd already adjusted the original pattern to make it stronger but now I see a better way... 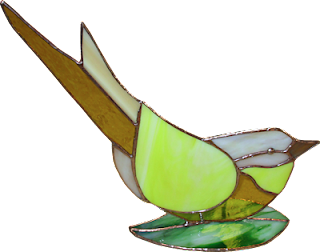 Linda F made this absolutely CHARMING LSU Suncatcher from the standard pattern that we normally use.  The only difference is that rather than having it run 22 inches wide, this one is only around 9 inches wide.  Honestly, it's the cutest thing to see in person!

Jeannette completed her Magnolia Window and decided to surround it with a double border.   The thinner, inner border's  color was chosen by taking a little used color that was used in the magnolia itself-- that being the center portion of the flower.   Did that work out perfectly or what! 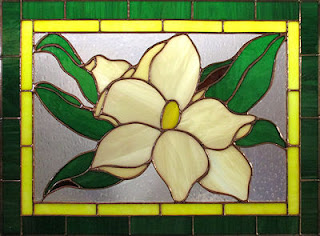 Carol's latest Spinner is a mix of bevels and red glass with a few dichroic bevels thrown in around the corners of the Spinner. A lot of these are being made on Facebook and everyone is asking about how you make the Jig to position the pieces but Carol skipped the Jig and does it all by hand.   I don't see why anyone would need to do it otherwise as EVERYTHING fits together perfectly as you can see for yourself. 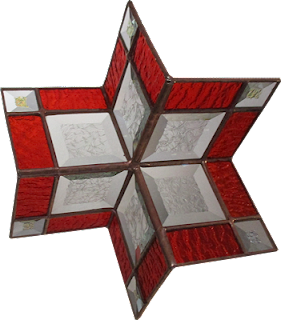 Barbara H's latest Butterfly Lawn Ornament was finished this week and I think she's getting the hang of these now.  She has a few more to make but she's decided to take a break and move along to something else before doing any more Butterflies. 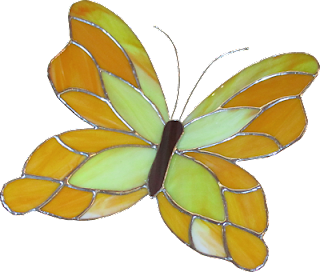 Annette's Psychedelic 70's Poodle is really moving along quickly.   It just goes to prove that when you really look forward to making a window you can achieve things more quickly.   Once the pooch itself is cut out the rest of this will be a piece of cake! 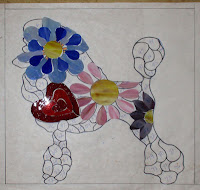 Speaking of psychedelic, Becky B's Mutant Fish Window is coming together so much that you can see what it is now.  She's decided to use green globs for the eyes and believe it or not, the body and the fins have all been cut out  from just one sheet of glass.   This shows how important it is to consciously position your pattern pieces onto your glass.  By paying attention to the colors that run through the sheet you can make one sheet of glass look like 3 different colors!

Betty has two windows in the works this week and her Iris and Lilly Window is very near completion.  She only has the back side of it left to solder and then it will be very well behind her.   Her Sunflower Panel isn't as far along but it's close now!  Betty doesn't like to have less than two projects in the works as you can see in the picture below.

Kerry's tractor Window is also well under way and the glass he is using for the tires is so perfect that, well, you just couldn't do any better.   The engine section of this will be the trickiest part but with a little patience and accurate cutting it won't be bad.  This Tractor is going to look great.

Jeanne M's Patriotic Heart Window is all cut out and she was able to grind all of her pieces and then wrap them as well.  She's decided to put this into a window so we'll see what she decides to use as a background glass upon her return. 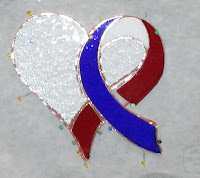 Tasha's been busy working on two different windows and has one of them all set for solder already.   Her Lady With Umbrella Window looks stunning and her Poppies Window is just about ready to go home with her for the final time.

Melissa's Heron Window has officially been ground and it's even wrapped for the most part. She even got the eyeball ground into place which is something that we don't like to do until the window is ground to prevent the eye from not lining up.   In fact, I think that may be a great tip to go over next week!

With the front of her Patriotic Horse Window all soldered and only the reverse side to do, Belinda may very well complete this upon her return.   I can't wait to see this hanging up with some light behind it! 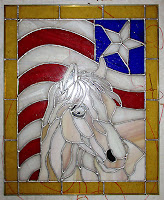 Linda F also started and finished grinding this cute Cactus Suncatcher that she found on the internet.   We added the sun so that the 'arm' of the cactus wouldn't just fall off.   This is another perfect example of how some patterns that you find online won't actually work in real life situations! 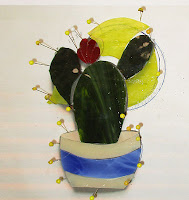 Cindy has made AMAZING progress on her Birds On A Wire Window.  When she came in there was still some wrapping to do but that has been done and this is now ready for some solder!

Rowena has started a design that can only be described as 'flowing'.   Utilizing soft colors and pleasant graceful curves, this project will be peaceful indeed.   She began cutting it today in class and ended up walking out he door with all of her glass cut and some grinding having been starting! 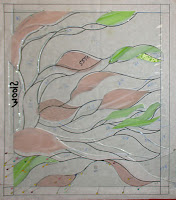 Jeff has slid on over to the second 3rd of his current project.  With the sunflowers behind him he's now working on the humming bird and dragonfly center portion of his window. 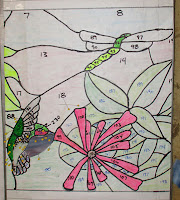 Well, MiMi has reached the next stage of her Seafood Window and now that she has all of the seafood ground she's going to be spending her time with some foil nearby as she wraps all of these pieces.  Once that's done she can tack it together and get to work on her Newsprint background glass.

The front side of Shawn's Stylized Fleur de Lis  Window was completely soldered this week so she then turned it over and went to work on the back of the window as well.   This is very close now because all that's left to do is a few touch ups.  We'll see this completed the next time she walks in the door. 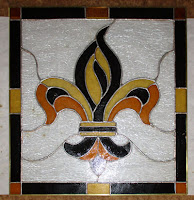 Susan D's Memorial Window is just about finished as well.   She has both sides soldered and only needs to smooth out a few rough spots and then attach some zinc channel.  Once that's done we can call this finished and get some light behind it! 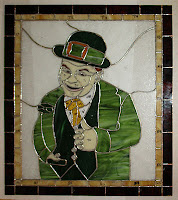 Next we look at another LSU window but this is just the bottom portion of Angie's Tiger Eyes/LSU Window.   Now that the bottom section has been cut and ground Angie will be able to attach the top section along with her borders and channel thus finishing her latest project. 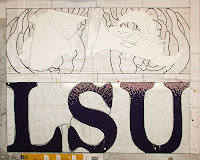 So that wraps this up for this post which is still a week behind.  There's one more to go to bring us up to date but I have all the pictures ready for posting so hopefully we'll have two posts this week.