Believe You Can And You're Halfway There

What's a zipper?   Well, in the stained glass world a zipper is a flaw found within a sheet of glass.  Although most commonly found in Spectrum glass (now known as Oceanside Glass) flaws exist in almost every sheet of glass you see.   I was told that years ago Spectrum Glass was fairly flawless but the common complaint of their product  was that it was too perfect and looked like plastic, thus zippers were born.

Zippers come in all lengths as you can see below. 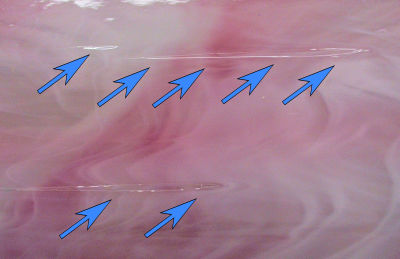 Using a piece of glass that you've cut with flaws is fine as long as the flaws are completely contained with the piece.  In fact, L.C. Tiffany's work is filled with flaws.  However, there is one rule to follow when you see a zipper in the glass you are tracing your pattern pieces onto.  Do NOT allow your cut to run over the zipper as you see in all of the pieces below. 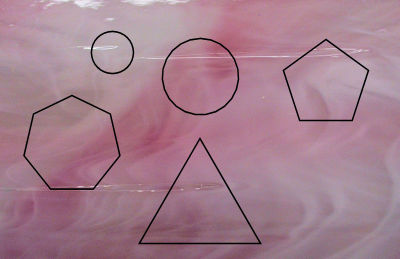 It's fine to have a zipper inside of the piece you are cutting as long as the entire flaw is contained within the piece.   If your cutter has to run over the zipper then you need to reposition your pattern piece so that it doesn't run across a flaw as in the picture below.  This reduces the chance of breakage, especially if the cut follows the length of the zipper. 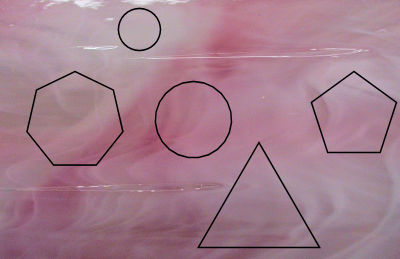 Following this simple piece of advice will make your cutting go smoother and give the head of your cutter a longer lifespan.  Alas, there's always an exception to any rule and this zipper rule may be broken when cutting long strips of glass (for borders) when the zipper CAN'T be avoided.

Ok, are you ready for this?   Annette's Psychedelic Poodle is finished and it looking amazing!  To me it's pure 70's and makes me want to haul out a transistor radio so I can listen to Casey Kasem's American Top 40 while looking at my black light posters!  Now that I think about it I want to put a black light on this Poodle to see if it will light up any brighter!  Annette surely did a wonderful job making this unforgettable window and her abilities have grown while making it in leaps and bounds. 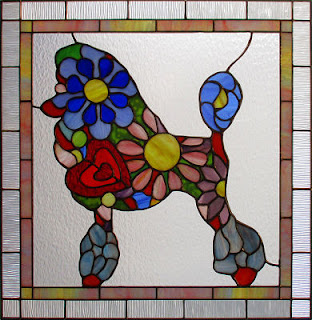 Then we have Jan's beautifully calming Dragonfly and Water Lily Window whose colors are perfection even when they were just stacked as a pile of glass on the work table.   Cut out and assembled, Jan has made a gorgeous window that she can truly be proud of. 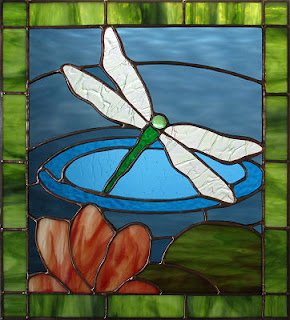 Cindy put the finishing touches on her Baby Box by adding a feet to the corners so the box doesn't sit directly on the table.  Once that was done she got her top attached and I took this picture.  Skylar will love this when she gets a little older!  It's a definite keepsake and Cindy made making this look easy. 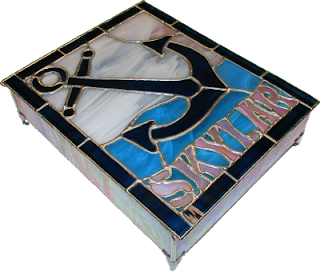 Susan D completed 2 Jewel Hangers and used two different jewels in them to help give each one its own bit of 'character'.  Her symmetry is spot on as you can see because these both hang perfectly straight. 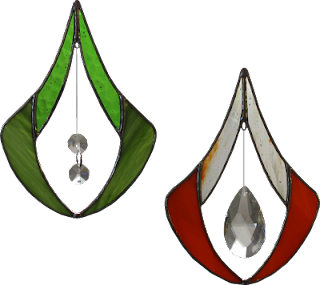 Linda F's HLB Suncatcher looks bigger than it is when you just see a picture of it here online.   Next week I'll take a picture of one of these with a dollar bill next to it for scale because most people think I'm joking when I say that it's only 8 inches wide.

Carol cut out and completed two of these beautiful Star Within a Star Suncacthers.   She's added an extra piece of blue into the mix and I think it looks better than the one I made with only one blue stripe.  This may look like an easy 10 piece suncatcher but if the lines are off just an eighth of an inch the entire design becomes twisted and hangs crookedly.  Carol's is (as expected) perfectly balanced. 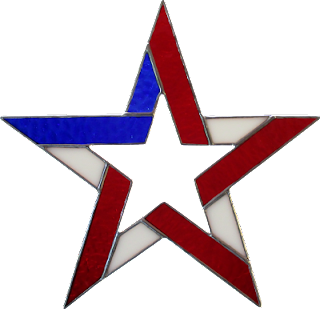 Betty's got another Snowman under her belt and her ability to 'tap tap' on the edges of her suncatchers has become top notch indeed.   I couldn't do better myself. Rose has begun working on her first window and she wanted it to be nice and colorful.  These flowers certainly fit the bill and when she adds another color for the final border she's going to have one beautiful Flower Window.   I have to say that she did a marvelous job cutting this all out in just one class.   She appears to be a natural at this. 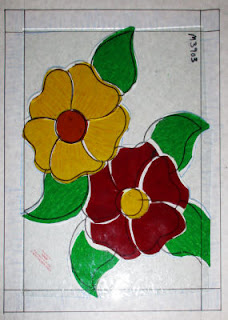 Susan R's Seafood window is really turning into spectacular project.  It's a big one, that's for sure and although it's not ground it's already fitting together nicely which is a testament to her cutting. 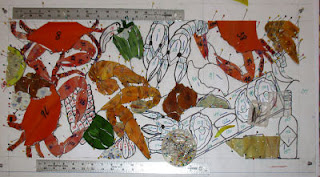 Lara got her Scissors all wrapped and tacked together and now you can clearly see how excellently she utilized the different sections of a single sheet of glass to achieve a different look for the blades of the scissors.  It's hard to believe that his was all cut from one piece of glass, but that's a fact. 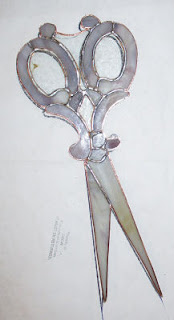 Jan also got a Unicorn Window window started this week and judging by how quickly she cut out its iridized mane I'm thinking that this won't take her long at all. 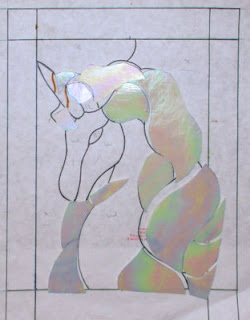 Jeanne's Cross And Treble Clef Window is not only all cut out but nearly ground as well.  With just the center round section of the Treble Clef left to grind I'm betting dollars to doughnuts that she begins wrapping this window when she comes back in. 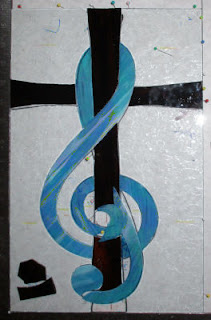 Melissa may have started a new project this week but that doesn't mean that her beautiful Peacock Window will be forgotten.   It just means that something came up involving a Train. She's drawn the pattern herself and you can color me impressed! Melissa doesn't waste any time when she's working on a project. 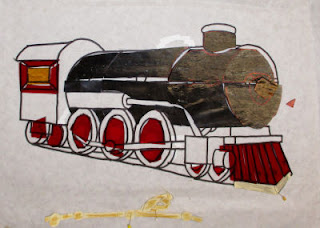 Mary Grace got the hardest parts of her Louisiana Rifle/Arrow Window fitted together this week and she's certainly relieved that the rifle is behind her now.   The scope itself may have been challenging but she accomplished grinding it in just one class.   It certainly looks as though the rest of this will be completed upon her return. 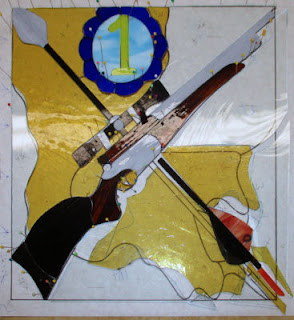 Check out Belinda's Sunrise window!   It was in pieces the last time that we saw it and now it's all assembled and fitting together perfectly.  With the front side soldered there's only the back side left to go so this will definitely be completed when she comes back in next week. 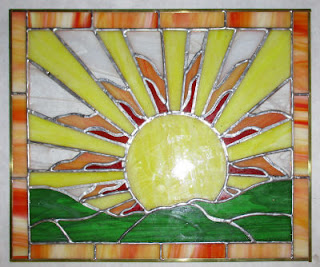 Check it out.  Shawn's working her Autumn Leaves Window fast and furiously.   I'm stating for the record that this is the window in her stained glass career when everything fell into place for her.  Her cutting and grinding and even her foiling is absolutely wonderful.  Her work is as impressive as the window is itself.

Jeff has begun working on the third section of his Flower Window and got all of the toughest thin pieces cut out and mostly ground.  Me, I can't wait until he puts the three panels side by side and starts filling in the missing pieces that join everything together into one large window. 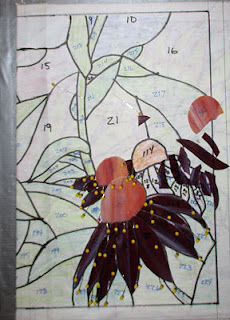 Kerry came in and finished grinding and cutting the remaining pieces of his tractor window.  As each piece was wrapped he would foil it and tack it into place so the next piece could be traced from the openings left in the window.   By the end of the night he was picking out a color for the border that he will attach when he comes back into class. 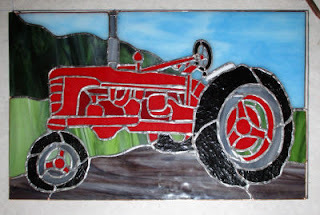 Becky S has her Egret Window wrapped and ready to begin tacking!  There isn't a piece in this window that doesn't fit perfectly and that's because of Becky's amazing attention to detail.  I know she can't wait to solder this and she can start on that even before the borders are attached. 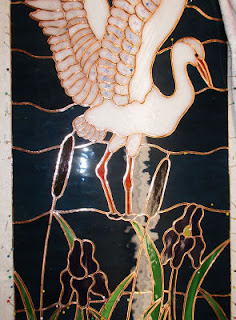 Tracey's second Grinch Window was completely ground this week which means that she can begin foiling all of her glass.   I always say the second one goes twice as fast and Tracey is proving me correct! 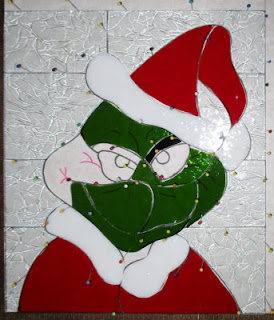 MiMi's Duck Window is all coming together now that all of the centerpiece has been cut and ground.  Once the border to this has been wrapped and tacked MiMi will square it off and turn this into a rectangular window. 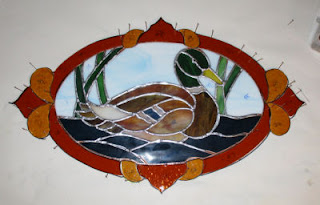 With all of the grinding done on her very graceful Heron Window, Mary began wrapping her pieces during class.   She's taken her window home with her and promises to have everything wrapped when she comes back in.   And I have no doubt that she will. 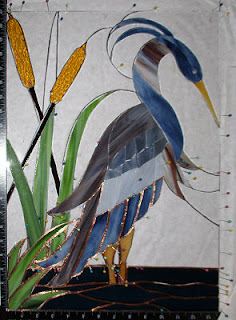 I'm afraid I never got a picture of the Wedding Box that Martha ius working on but at this point in time the side flower panel is almost completely ground.   Next week I hope to show you just how far she's come with her first Wedding Box.

Brace yourself because in another few days we'll have yet another post-- There's just so much to see!