My First, My Last, My Everything

We're going to jump right in this week as I don't have a single tip idea written down to go over.   I thought of plenty of them during the week but if I don't write them down they are completely out of my head within seconds!

So Martha completed her Rose Window and the end result is elegant indeed.  What's hard to see here in the picture is the iridised pink glass that she used throughout her project.   Still, now that I've pointed it out I believe you can spot it if you look closely enough because there's a yellowish tint to the pieces.   In real life it adds so much to this beautiful window, I just wish it would photograph better. 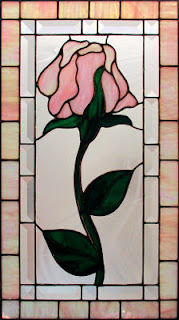 Patrice finished her Umbrella Lady Window and I like her variation of the pattern even better than the original design.   I think this window will always have Patrice's spin on it from here on out because that trim just adds that extra bit of pizazz! 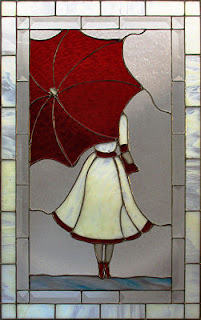 Linda F is back in class and she started things off by wrapping up her Double Sunflower Window which she then took home with her.  These walk out the door pretty quickly for her now.

Rose is our newest student and this is her Butterfly.  She's worried about her abilities but from what I've seen she has absolutely nothing to worry about.  She'll be starting a colorful flower window when she comes in again next week and she'll hopefully get it all cut out before she leaves. 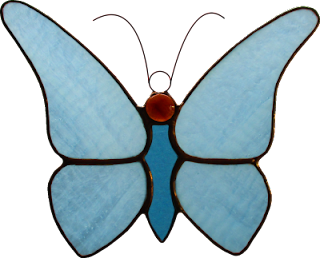 Susan D finished the last of her spider webs and even constructed another beaded spider, this one in a striking position.   Happy Halloween! 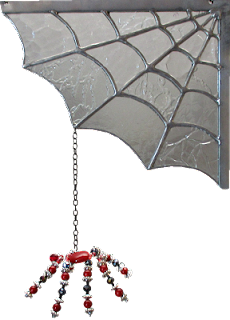 Tracey came in with her latest Butterfly Lawn Ornament almost completely soldered.   She finished soldering it quickly enough and then moved on to another familiar project that you'll see a little further on. 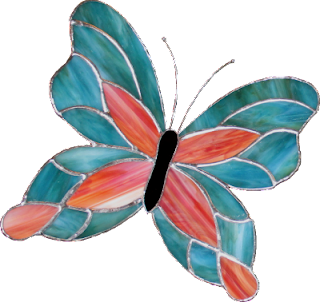 Jeanne M started a new project this week and got almost all of her Treble Clef Cross Window cut out.  She's already begun cutting the smaller background pieces out and with just 4 or 5 larger pieces to go I know that she'll start grinding this when she comes back in.

Melissa's Peacock Tail Feathers Window is going to be stunning for sure.   She has most of it cut out and you can see that her colors are perfection.  She's using textured cathedral glass for all of this so it's going to light up in a really spectacular way.

Belinda's Sun window is fitting together nicely now that she's begun grinding.   Her attention to detail is what's going to make this look even better than what the pattern shows (and the pattern itself already looks great.)

MiMi's already got her newest project well under way.  This duck is small and detailed but Mimi not only has it all cut out but basically ground as well.  With only a few pieces left to go MiMi will be wrapping this before you know it.   Once it's tacked together she'll place it in the center of a squared off window.

Jan's Dragonfly Window is very close to being completed now.   There's a small missing piece that we didn't have the glass to replace but Jan has more at home and will fill that in when she returns next week.   She'll also get her border attached as well (she's got most of it wrapped already) so this is just about completed. 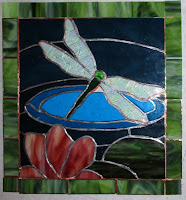 Jeannette made major progress with her LARGE Transom Window as she's now got all of the left hand side ground.   We aren't adding the top border until this is all tacked together because she'll be running Re-Strip Copper Reinforcing Strip between the borders which will add an undetermined amount to the height of the window that she'll need to account for.

Kerry's Tractor is tacked together and now he's filling in the tiny pieces that make up the steering wheel, lights, seat and gear shift.   Hopefully he'll get these squared away next week but it's slow going since he now needs to wrap and tack each piece into place before he can move along to the next piece.  I think that once the steering wheel is done the rest will be a piece of cake.

As you know Linda is back and she was able to cut, grind, wrap and tack together this H L B Suncatcher panel.   It's  smaller than you might initially think since it measures just under 8 inches wide.  It may be small but it's jam packed with Linda's excellent work.

Susan R has started her Seafood Window and cut out 3 of her crabs.   He colors are slightly different from the colors that were used in the last seafood window we featured here but they easily look just as good.   This is a complex design that will take some time to complete but Susan is certainly up to the task at hand (and claw).

Angie got the left side of her Nativity Window tacked together and then moved along to grinding her center portion.  I like that Angie is working in sections on this large window because that's exactly what I would do especially when the window is so distinctly divided out into 3 areas.

Mary, try as she might, didn't get her window completely ground but with only a handful of pieces left to go I hope she isn't too hard on herself.   I miss the goals I set for myself all the time when it comes to glass work but that's because it always seems to go quicker in your head rather than when you're actually in front of the grinder.   I know she'll be wrapping this when she returns.

Becky B cut out all of the clear glass for her Springfield Fish window and then began grinding those pieces.  Hopefully we can get them tacked into place upon her return and then work out what kind of  borders she wants for this exotic window!

Barbara H wrapped and tacked her Fleur De Lis Window and then got her final border cut as well.  the pieces to the border have been ground so with a little luck she'll have this all tacked together and ready for a finishing solder bead when we next see it.

Becky S resumed wrapping foil onto the pieces that make up her Egret Window and hopes to get it tacked together upon her return so that her border pieces can be cut.   Becky loves to solder so I know she can't wait to get to the relaxing part of the building of her window. 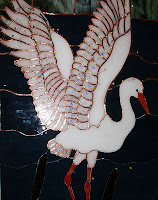 Tasha's Cat is ready to be tacked together so she can keep things from shifting while she works on the face which cannot get twisted at all.  This is a technique that I employ whenever a face is involved and it hasn't failed me yet.

Annette soldered the front side of her Psychedelic Dog Window and is now ready to flip it over and do the same to the back side.   I have a sneaking suspicion that this will be completed next week because she handled the front of this window almost effortlessly. 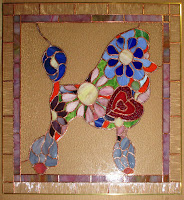 Cindy's got the top of her Baby Box completed and the bottom as well.  We were going to attach the two pieces with a hinge but then Cindy decided that she wanted to put feet on the four bottom corners of the box.   That will happen when she returns and that won't take long at all meaning that she'll have this completed and then move along to a wedding box.

Mary Grace got the last of her glass cut out for her Louisiana Rifle and Arrow Window and then started working on grinding all of her pieces into shape.  Slow and steady winds the race and Mary Grace is already winning on this window. 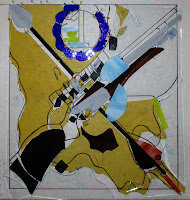 Shawn worked quickly and proficiently through her class and by the time it was over she had all but one piece of her Autumn Leaves Window wrapped.  This window doesn't get a border so she'll certainly tack this and then start soldering it when she comes back in.

Tracey is working on another Grinch Window which is probably going to become her signature piece because students are still talking about her first one!  The second one always goes faster and as you can see she's wasting no time whatsoever getting her cutting done. 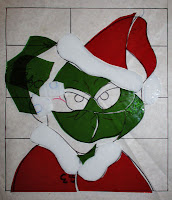 Once Martha completed her Rose Window she resumed work on her Wedding Invitation box.   You can easily see that her top flower is under way towards fitting together. 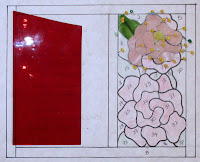 Lastly,  Jeanne L is about to embark on making a beveled cross suncatcher.  This is the pattern she's using and we'll see what glass she's picked out for the cross when we next return. 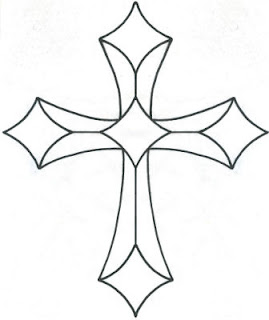 I promise that we'll have a tip next week along with other completed works by our students!