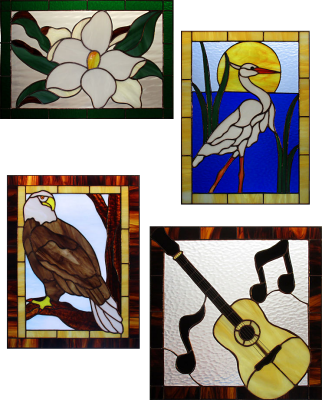 We had a Stained Glass Weekend Workshop about three weeks ago and even though this is a bit late we're going to briefly cover what happened during that weekend.  We had four students make as many windows in just two days so let's look at what happened.

The first thing everyone did was to cut their glass for each project.  We had one first timer in our class (Winnie) but she handled the cutting beautifully.   I think it all comes down to how easily that first cut goes.   If it follows the score line without breaking confidence is built.  And that's exactly what happened when Winnie didn't break any of the cuts that she made during her cutting lesson.

Angie's been taking regular classes for a while now and as you can see below her glass fit together wonderfully after she cut it. 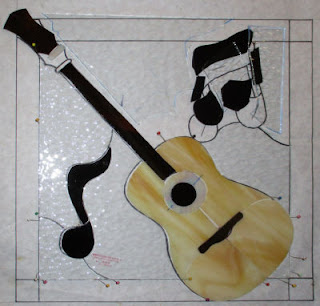 Roxane may have been missing in action for a while but she's lost none of her cutting prowess.  Pay attention to her Eagle's chest and belly.  They're  white here at this point but she's going to realize that it should be brown well before she tacks this together. 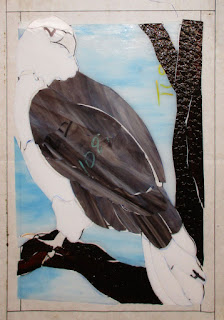 Once the cutting is finished the next step is to grind all of the pieces so everything fits perfectly.  Grinding also eliminates small flaws in the glass that appear when you cut your glass which can cause your glass to break while you are soldering you window. Here you can see that Winnie is using pins to keep things rock steady as she grinds. 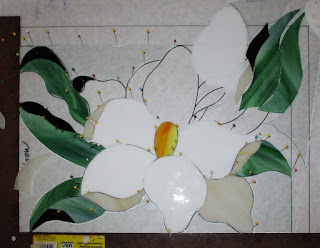 Once everything fits the next step is to cover all of the glass with copper foil.   Lead won't stick to glass so copper is used to surround each piece.  Here's a look at Nicole's Egret all wrapped and all ready for solder. 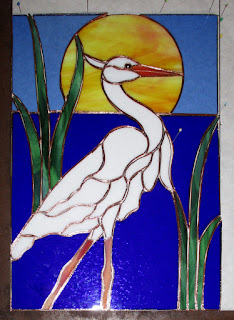 At this point I was so involved with everything that I forgot to get pictures of everyone soldering their windows.  Alas, as you can see, that part of the process went incredibly smooth.  Here's Winnie's beautiful completed Magnolia Window. 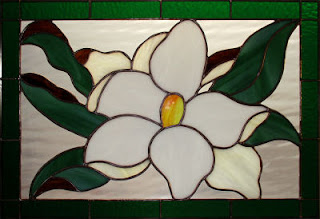 Nicole made a rather complex Egret Window and since she's already made a window with us in the past I felt that she'd be able to handle this in the two day time span.  On Sunday she proved that I was correct in my assumption. 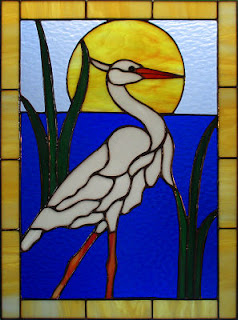 Next up we have Roxane's Eagle who now has a brown chest and stomach.  Sometimes I get so involved in what our students are working on that I don't see the forest from the trees and this was one of those times.  On Sunday when Roxane asked if she could change those white feathers to brown it dawned on me that they were incorrect, so we changed it.  And here's her finished window. 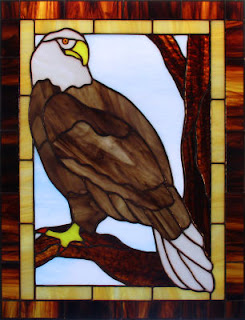 And finally there's Angie's Guitar Window which was completed when she attached the some guitar strings made out of wire.  It's the little extra touches that make a window really stand out like this one does. 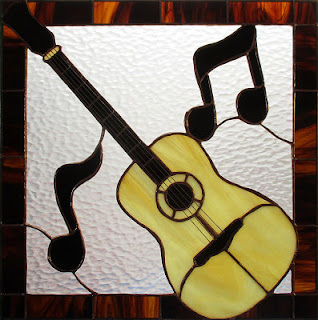 In the end everyone had fun, there was plenty of laughter, and band-aids were nonexistent!  Winnie also expressed interest in returning to make another window sometimes down the line so I think it all worked out spectacularly.