Who Let the Dog Out

Very often we have students asking the same questions over and over because they know that the answer doesn't have to be committed to memory since I'm always around.  Lately I haven't been answering these question right away, instead making the student think out the question and figuring it out for them self.  The answers are almost always readily apparent if you just look back in old blog posts, google a picture of the item, or even look at it in real life.

For the more technical questions our students can always go through our "Good To Know" papers that I've assembled.  That said, when it comes to a design choice there's rarely a right and wrong, just a more aesthetically pleasing answer.   But the technical stuff (for example: 'Do I do the edges of a suncatcher first or the top?')  should be committed to memory.  There's not a lot to memorize to be proficient in stained glass and learning those few simple rules is actually easy when you know WHY you are supposed to do it that way.

And with that out of the way I'm pleased to say that Angie completed her Nativity Scene Window! I can tell you that not only is it a hit here in our different classes, but on Facebook as well!  She has a lot of time and effort in on this window and it certainly shows.  For those of you thinking about making this yourself just realize that it's over 3 feet wide and really can't be shrunk down much smaller without making the pieces tinier and harder to work with. 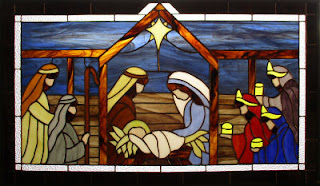 Becky S put the finishing touches on her second Egret Window and wow, it is a sight to behold. If you thought that Angie's window was big, well, this one is even bigger.  Measuring 20" x 50", this is a window that demands your attention when you see it in person.  I'm thrilled to see this completed because it was drawn up for someone else who then rejected the pattern.   That was clearly a mistake!

Here we have a look at a new Santa Window that Rowena finished this week.  Although it was only seen in class two times, Angie decided that she was going to make one as well.   And two other people wanted the pattern also!  Rowena has started something here. 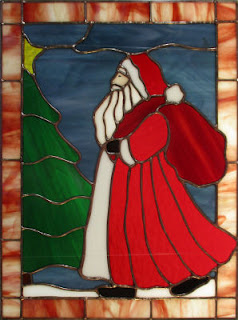 Jeanne M's Cross/Treble Clef Window is like music to my ears.   There's something about music themed windows that I've always loved and this is no exception.  Jeanne has really caught on quickly because this window took her no time at all to complete. 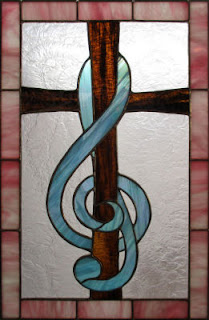 Cindy's Wedding Box is really a work of art but I just couldn't get enough light on it to do it justice.  That's the problem with some of the projects that are completed during our evening classes-- you just don't get to really appreciate them from the photos I manage to take. 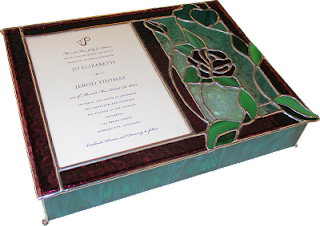 Rose put the finishing touched on her Flower Window and came up with an ingenious solution to a common problem.   When it came time to color the lead she couldn't decide if she wanted to do it in copper or leave it silver, so she did both!  Yep, this beautiful window has copper colored lead on one side and silver on the other!  Now that's using your noggin. 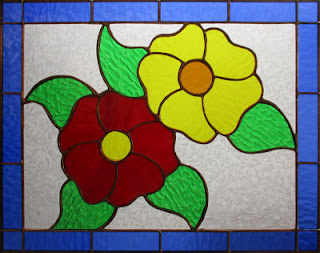 No one will convince me that this Reindeer Lawn Ornament that Susan D made isn't the cutest thing.   And the red nose instantly identifies him as Rudolph (not Wolf!)   Since she's making at least two more of these for her yard the remainder of her reindeer will have black noses. 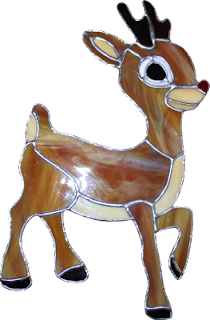 Barbara wasn't sure if she wanted to make this window when she discovered that the bevel cluster that it was designed around was no longer made.   I convinced her to cut it out of water glass and sure enough, it looks perfect!  This goes to show that you don't always need bevels for your clear windows, just two contrasting pieces of glass. 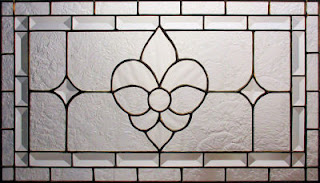 Carol's latest Crystal Hangers are different this week because rather than displaying crystals these are displaying Crucifixes. It's a great variation that goes together oh so well. 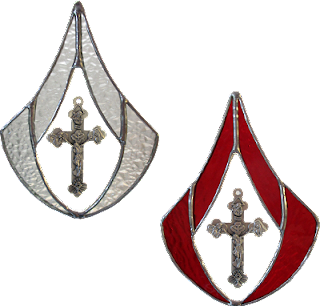 Jan is nearly finished with her Unicorn Window and the borders she picked are pure perfection.  The inner border is transparent champagne while the outer border is a wispy champagne.  What makes it work so well is that the iridized glass that she used for the Unicorn's mane has a lot of champagne color in it also.  And that's why we say that Jan has an eye for color. 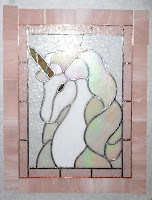 Speaking of moving quickly, Kerry got his Flamingo Window all cut, ground, wrapped and tacked together in one night!  With just the border to go on this and very little soldering to do, there's actually a chance that he'll finish this upon his return. 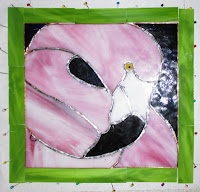 Susan R has begun grinding all of the Seafood in her Seafood Window and wait until you see what she's going to use for her corn.   It's going to look stupendous, just like the rest of the window!

Jeannette's Transom Window is moving right along as she now has the right side nearly ready to be tacked.  There's only 6 pieces left to be wrapped and then she'll be able to join the two sides and then get the top border attached as well.   With a little luck she'll get some channel on this 6 foot window as well!.

Melissa's Train looks better than ever and I know that this will surely be completed upon her return.  Melissa has an eye for exactness and this large Suncatcher is just about ready to be soldered.  I can't wait to see her do the metal parts because students are always amazed when they see how it's done for the first time.

Here's the Cardinal Suncatcher that Rowena began working on after she finished her Santa Window.  She's going to change things up a bit and we'll show you just how she spruces this up when we come back to it next week.

Belinda has her Wine Window just about completed now.  Wait until you see this up in the air because her use of a lighter green and lighter blue behind the wine glass looks amazing!   It's too bad I didn't notice that the pattern is upside down under the window before I took the photo.  If I had you'd see the glass effect much better.  Rest assured, you'll see it in all of its glory next week when Belinda returns. 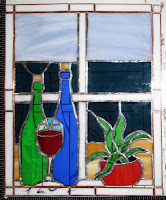 Here's another window that's about to get joined together.  Jeff's Summer Flowers Window needs a few pieces to connect his three sections and then he'll be able to add a border and begin soldering.

With her inner border attached and her second (final) border ready to be tacked into place, Mary Grace will begin soldering this when she returns.  She'll also get the year attached to it as well and it will be fun to show her how that's going to be accomplished because it's something completely new and different. 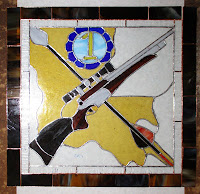 Our first Grinch of the week is a Smiling Grinch with a heart that's grown 3 sizes bigger.  In Whoville, that's a very big deal!   So who's making this?  That would be Annette and she's making great progress as her Grinch fits better and better with each passing week. 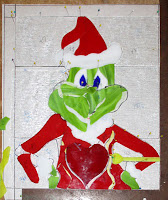 Betty is as busy as can be but with solo windows of two different patterns.  This is the first time that she's making this popular Santa Face and it just needs some background glass cut out before she starts grinding it.  Her Sunflower window is very nearly completed already with just the border needing to be attached.

Tracey's Grinch is actually finished-- all it needs now is a bath and a quick hit with some patina.  Look to see this sneaky Grinch  among our completed window next week. 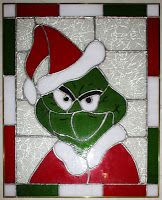 And lastly we have Mary's Heron Window to look at.  With the front side completely soldered and only a few lines left to go on the back side I'm going to consider this window a done deal.  Next week this will be at the top of our post in the completed windows section rather than here at the bottom.   I can't wait to see this lit up!

And there you have it.  A VERY productive week indeed because I couldn't fit one more finished project in our email notification for this post no matter how hard I might try!