What is the Rule of Thirds?  It's one of the fundamental rules of composition that helps place your subject within a frame to insure that the subject matter stands out.  It's human nature to want to center things but over the years artists with an 'eye' for composition realized that by dividing your frame into nine equal rectangles (3 x 3) you can move your subject to one of the intersecting lines or along one of the lines to gave the shot a more dramatic effect.  Look at the following pictures to see what I mean. 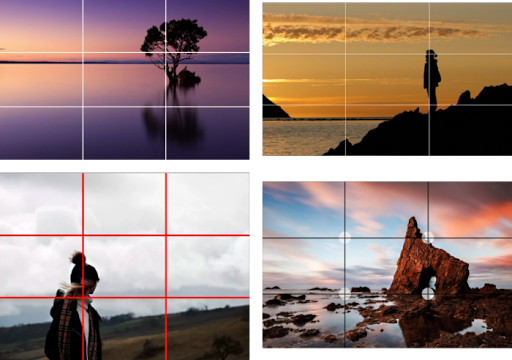 Interestingly enough, almost any digital camera will allow you to display Rule of Thirds grid lines as you are framing your shot.  On an iPhone or Android phone you can go into your cameras settings and turn on GRID to have lines appear on your screen to help compose your shots.
Below is a more dramatic example of how the rule of thirds can make your art appear more interesting.  Yes, the bowl is bigger in the second shot but that's only because zooming in closer was the only way to get the cup, the spoon, and the bowl to align on the intersections.   What a difference, don't you agree?

So the next time you are making a window or even just taking a picture consider the Rule of Thirds.  Sure, there are times when you can't use it, but when you can it really gives you an edge over someone who doesn't know about it.  Composition is 90% of the picture.
First up on our completed projects is  Jeannette's Heron Window which has an incredible sky.  She made sure that each piece lined up as she placed her pattern pieces on the glass to give the background a nice soft, flowing effect.  As you can see, she succeeded and the Heron itself lies on one of the vertical lines of the Rule of Thirds. 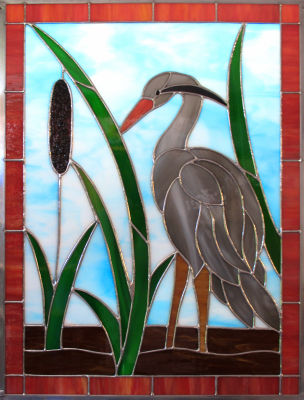 Cindy ripped apart her old Mosaic Bird Window and rebuilt it into this much more colorful window.  She was not only able to re-use the 3 birds she'd made but the border and zinc framework as well!  It was a lot of work but you have to admit that it was certainly worth it. 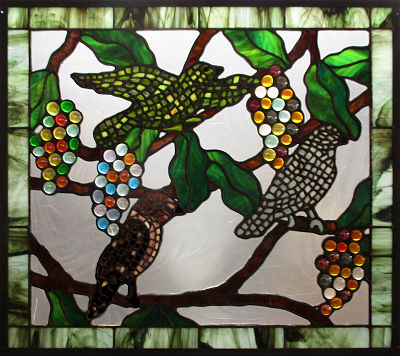 Here's Linda F's latest Yard Pane.  The Rabbit and the colored eggs give this a distinct Easter theme.  It's certainly colorful and it will surely draw a lot of glances as people pass by her house. 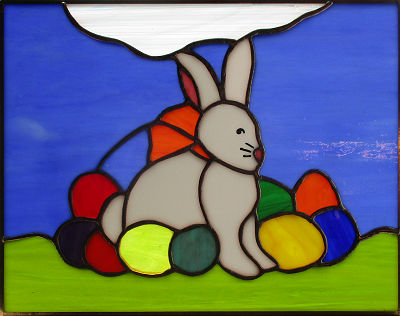 Martha's second Franklin Street Light Window is officially completed and is another perfect example of a window that beautifully utilizes the Rule Of Thirds.  The off centered look is done purposefully to draw your eye to the window.  And speaking of thirds, Martha is about to make a third one of these! 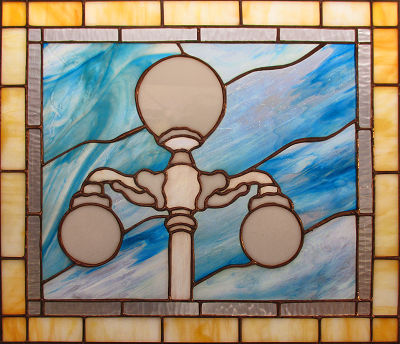 Ann has been as busy as a beaver knocking out Cross Suncatchers as she got two more completed this week with a third one ever so close to being finished as well.  As you'll see later on Ann will have more of these completed upon her return. 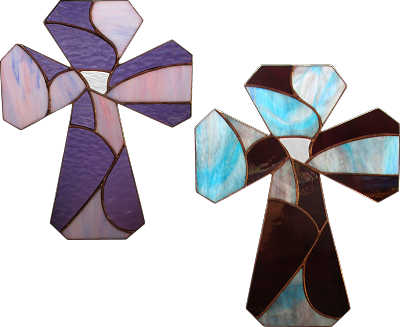 Angie has started this Pumpkin themed window and got all of the glass that you see cut out in just one class.  I think a lot of people are going to ask about making this pattern but keep this is mind:  It's 3 feet wide!

Barbara H started an LSU Window and decided to forgo the tiger paws in the corners that she was originally going to include.  We've seen these 3D LSU's made before and I think they look great on their own.  Barbara will be cutting out the purple glass which will form the shadow of the letters when she returns next week.

Tracey got all of the glass attached to her Cardinal Window and even got some channel on it as well.  Her double border is stunning and all she needs to do now is add some solder for this to be completed. 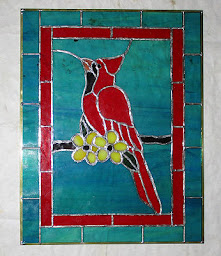 Susan R started and completely cut, ground, and wrapped her Initial Window that she's making as a yard decoration.   The glare of the light on the right side of the 'R' reveals the texture of the dark blue water glass that she's used for the background. 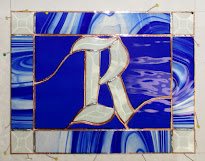 Melissa's Fleur De Lis Window has completely taken shape now that her inner borders have been cut.  This has a great look about it and many students have asked to see the actual piece already!  When she comes back in she'll begin working on the clear baroque background glass. 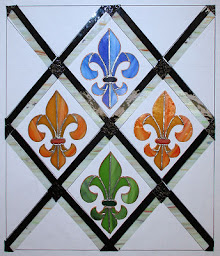 Here's a look at Betty's three newest Decorative Lawn Post Panels.  She's changed up the pattern a bit for the Pelican and that's the first step to making your own patterns.   You might not think so, but it surely is. 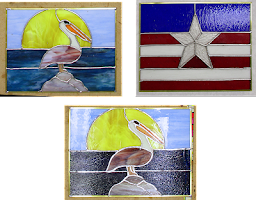 Susan D has another HUGE Lawn Ornament under construction, this one based on a large Heron that's over 24 inches tall.  This will be attached to another Copper Framework along with some other smaller pieces of stained glass and like her first one, it should be stunning.

Cheryl H wrapped all of her background pieces while she was at home throughout the week and then after she tacked them together while in class she worked on her two borders.   With the inner clear textured border attached and one final border to go, Cheryl will most likely be soldering this when she returns.

Linda F has started another Decorative Lawn Post Panel and this one features a black pumpkin.  This will never be confused with a Thanksgiving scene because the black makes it scream HALLOWEEN!  You may question the color choice but when this is finished I think you'll agree that it's a pleasant surprise. 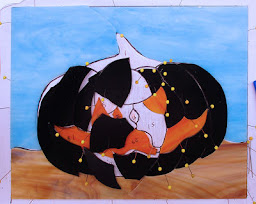 Address Window are the current rage and Shelley decided to put her 3830 into the mix!  Of all the Address Windows made so far, this is the most vibrant and colorful one to date.

When Belinda got an offer she couldn't resist on her Church Window a few months ago she just had to let the window go.  Alas, she missed it so much that she's making another to replace the one she sold.  As you can see it's moving right along!  She's begun grinding and once that's completed she'll cut the slats into the white glass.

Jan has resumed work on her Poodle Window that she's making for her daughter and only has a few pieces left to go before she starts grinding this for a perfect fit. The end is near and I know that Jan has this under control. 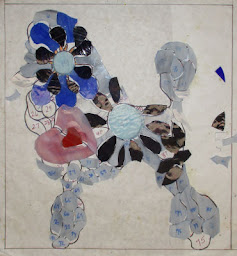 Jeanne L's Fruit Bowl Window is all ground and almost entirely wrapped.  There are only two borders left to go on this before she starts soldering.  Her inner border color is still under consideration but I have no doubt that whatever color she chooses will be perfect.. 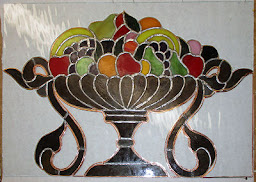 Linda L's Celtics Window is all soldered and just awaiting channel and some black patina to finish it all off. There is NO doubt that will happen when she returns because the channel has already been rounded which means that this is just 15 minutes away from being patinaed. 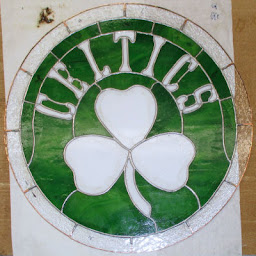 Linda L also worked on this blue feather when she realized that she didn't have enough time to patina her Celtics Window.  That's the problem when you use black patina-- you have to set aside an hour for it to be colored and then rewashed. 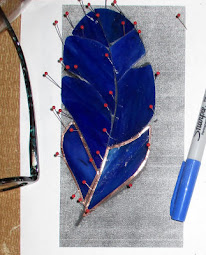 Mary Grace is going to go with three borders on her Praying Hands Window.  The first border is made out of bevels, the second border was cut from pink glass, and the final border with be another textured clear that you'll see when Mary Grace comes back in. 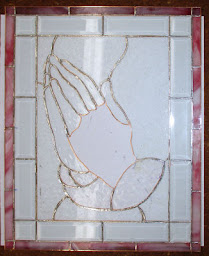 Roxane's Angle looks incredible now that the background has been cut, ground and tacked.  Roxane plans on finishing this off with a double border and I can't wait to see what colors she chooses.  More on that when she returns.

Am I re-posting the same window twice?  Nope-- Tracey's Cardinal hasn't been completed but you can see how inspirational  it was to Beth who is making one of her own using the same basic color scheme.  Beth B has her Cardinal all cut out and has officially begun grinding it from the bottom on upward. 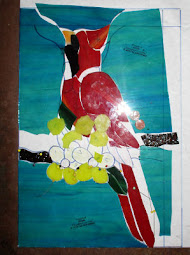 Finally we take a look at two more Crosses that Ann is working on.   They've been wrapped and I suspect she'll have these completed when she returns. 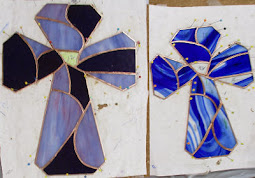