Let's start with a SIMPLE tip that I know people will thank me for.  As you grind, glass particles get thrown against your grinder shield and a lot of them stick to it.   After a while it feels like you're trying to looks out of a car windshield in the middle of a blizzard!   The solution is to clean the shield but there's a trick to it.   Almost everyone grabs a paper towel, wets it, and then wipes away at the shield which can make a bigger mess requiring more paper towels and time to clean up.  There's a way around that though.   Use a dry paper towel on the under side of the grinding shield and the glass particles wipe off cleanly and quickly.  Within 10 seconds you're back to grinding!
Okay then, this Angel Wing/Heart Window that Angie made is stunning and her background glass is perfection.  Since the final border matches the background we made sure that the grain went left to right whether the border pieces were on the sides or on the top and bottom.   Aligning the grain in that mannor carries the background through the entire piece perfectly. 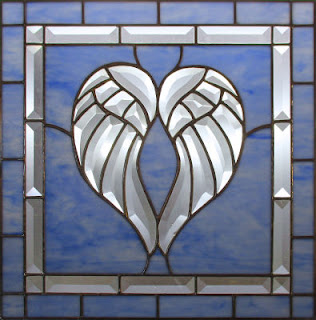 Now beveled windows don't get a lot of respect in the stained glass world but I've seen enough of them screwed up pretty badly to know that they aren't as easily made as some people would like you to believe.  Barbara gets two thumbs way up on this beautiful window though because she DID make it look simple!  This is pure elegance.

Betty made her own version of a Curved Birds On A Branch Suncatcher and what can I say?  It's perfect.   Her colors, her cutting, her soldering, all the way down to the way she attached the bird's eyes was just flawless on this piece. 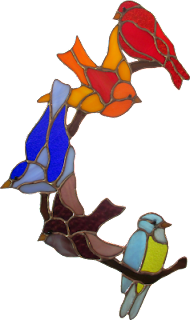 Susan D's Address Window was completed in just three weeks and that's really saying something because she had the bare minimum of help from me (I only helped by grinding three pieces of glass).  Susan has proven that she can take any project and then cross the finish line with it entirely on her own.

Betty not only finished her Birds On A Branch but also finished the work on her American Flag Insert Panel leaving her with this patriotic work of art.  You have to love it! 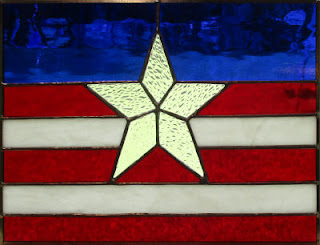 And Angie is another student who got two pieces completed in one class when she put the final bead around this Butterfly Lawn Ornament.  It's always been a popular piece but it's been awhile since we've seen this made so who knows--  perhaps this will start another trend. 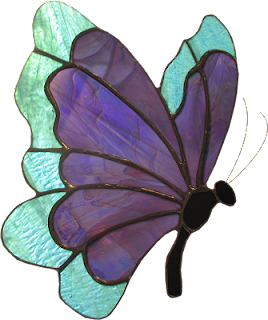 Susan R's second Mixed Drink Lawn Ornament is festive indeed.  I love that piece of lime on top.  What can I say, practice makes perfect! 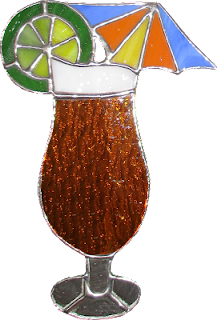 Melissa tacked together her four Fleur De Lis' and then we sat down and worked out how we could tie them together in one window.  She had two different ideas that both involved a repeating diamond background and in the end we settled on this design with a double border running throughout the window.  I think the colors are going to make this VERY interesting but you won't get to see what they are until next week. 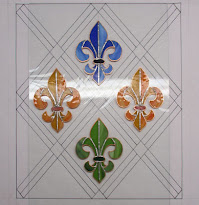 Mary Grace started a pair of Praying Hands and in just one class she's got them cut out and ground!  She'll be wrapping these upon her return to class and then she'll tack them and decide if she wants another border surrounded the beveled border. 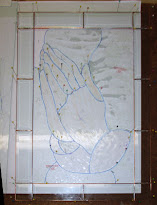 Jeannette has her Heron Window all ready to be soldered. That means that she ground everything and wrapped it all before calling it a day with us. That's what I call progress and this window looks great. 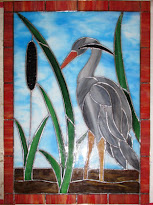 Beth decided to make a Cardinal Window and after tracing out her pattern pieces she began cutting actual glass. With the bird and flower petals all cut out she only has 5 pieces of background glass, 2 branches, and 2 flower centers to cut before moving on over to the grinding phase of this window.

Meanwhile Cheryl did a fantastic job grinding the pieces that make up her Address Window.  I showed her what she was doing on the first number and then she ran with it and finished it all off before taking her pieces home where she hopes to get them wrapped with copper foil.

Helen, like Cheryl, took to grinding like a fish to water. I showed her what to do and she fitted her LSU letter pieces together like she's been grinding for years.  She'll easily be adding a border to this upon her return and that will go quickly.

I always say that things go much faster the second time you do a pattern you've already made and Belinda's Church Window is proof of that just one week into its creation.  She'll be cutting some thin pieces next week and that will involve the strip cutter.

And Cindy is ready to wash and color her new variation of her Mosaic Birds Window.  She fought to get the soldering done in one night and in the end she succeeded.   We'll hang this up and call it completed when she returns to class. 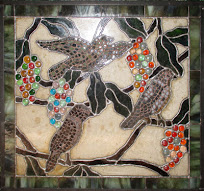 It's official--  all of the glass has been cut for Linda L's Celtics Window.  She only needs to grind and attach the final clear border and then she'll be able to move onto soldering it.  Round windows are becoming popular here in the shop. 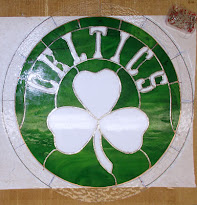 Ann actually got 4 Modern Crosses (3 large and one small) ground as I redrew her patterns which have seen better days due to 'overuse'.  She even started wrapping one of them but she still has a way to go before she can begin soldering these. Perhaps next week though...

Martha's new Franklin Street Lamp Window is all tacked together and awaiting solder.  People still ask why this isn't centered and all I can say is to look up the meaning of  the 'Rule of Thirds' in art. Pieces lose their interest when EVERYTHING is perfectly symmetrical.  This has personality. 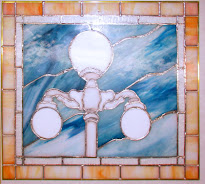 And in the end, the love you take is equal to the love you make.  Wait a minute, I meant to say that in the end we look at MiMi's Combat Vet Window whose feathery wings are set to fly!  MiMi only has to grind out the lettering that goes above the paratrooper logo before she starts wrapping all her pieces in copper foil. 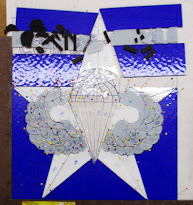 So that's it for this week.   Blogger has updated their interface which gave me fits while typing this up.   They call it an improvement but they've yet to fix the selection issue when uploading pictures, and the new auto indention function has me ripping out what little hair I have.  I'm sure I'll get used to it but  until then I'll find solace in complaining.
Paul
Bayou Salé GlassWorks
Posted by Bayou Salé GlassWorks at 5:04 PM