A Rock In The Y

MiMi's Butterfly window is downright perfect from the colors right on down to the soldering, cutting, and grinding.   There's not a flaw to be found because MiMi takes her time and makes sure that everything is perfect before moving along to another piece.  I'm making a note here, huge success. It's hard to overstate my satisfaction. 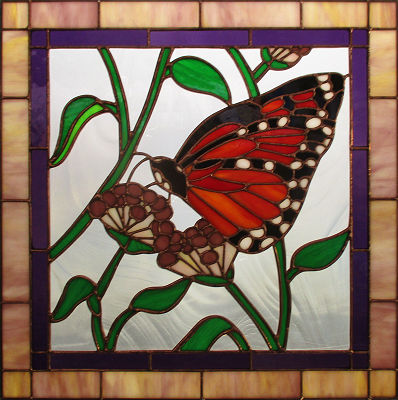 Next we have Sheri's Fractured Rose Window which is another example of perfect cutting and grinding.  The idea of this window keeps calling out to me and I know that someday I'll do something similar because as Sheri knows my tastes run towards the unconventional which is just what this window is.  Beautiful. 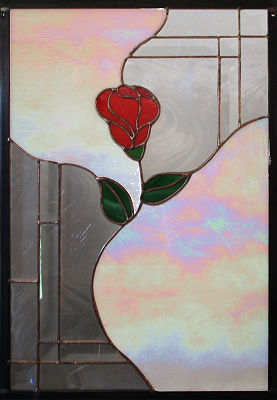 Jeannette has certainly been busy as you can tell by looking at her pair of Flower Hand Mirrors and her Dove Suncatcher.  These mirrors are  very popular gifts so we could be seeing more of these being made in the near future, especially since Jeannette's look so wonderful. 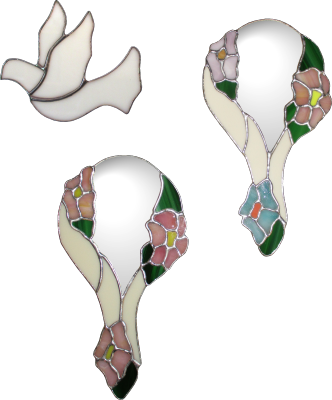 Shelley's Address Numbers aren't as colorful as she thought they would be but in the end I think they look much better with a blue border than with a multi-colored border.  And everyone agrees because that glass she used for her border is suddenly in demand now that students have seen it used.

Linda F mixed up three Drink Lawn Ornaments this week and this week they were staked and are now ready to display in her yard.   Have a drink on Linda! 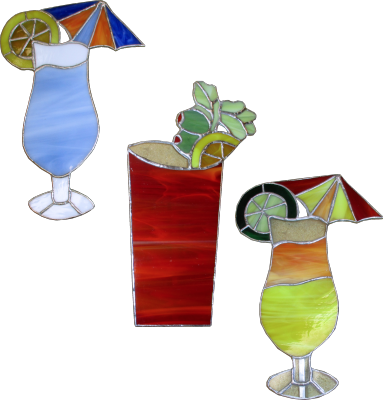 Belinda's second Church Window is a wrap!  She's already inserted it into her front door and she said it fit like a glove.  It looks great and it shows off her skills to everyone who walks into her house!

Susan R put the finishing touches on her Sunflower Heart Lawn Ornament and it really turned out nice indeed.  These are popular for a reason and Susan shows that in her work on this. 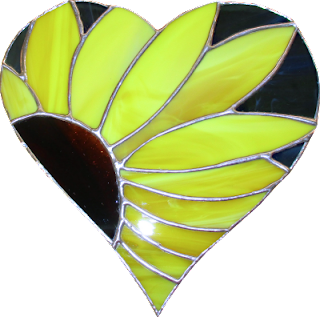 Helen  finished up 2 more Crosses his week and she says she's only got a handful more of these to go before moving along to a full sized window.  She also completed a Christmas Tree but alas, I have no photo proof of it. 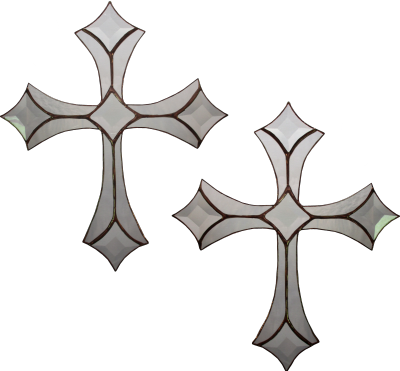 Beth may be making a Turtle but she's moving along on it as quickly as a Hare!  With almost all of her pieces ground already, she's going to be wrapping this before you know it.  And its fits together wonderfully! 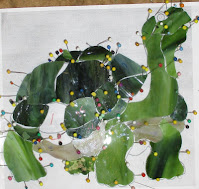 Cindy's got her Geometric Window with a Southwestern flare all wrapped and ready to be tacked and soldered.  She'll be jumping around while adding lead to this to avoid putting too much heat in one area.   I tend to do every other line and then come back and fill in the missed lines with solder. 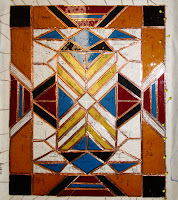 Angie has all of the glass cut for her huge Pumpkin window and she's just about ready to flip this over to solder the back side.  Stunning is the best word to describe this decidedly Autumn themed Window.

Lara finished wrapping her 3rd Flower/Leaf Window and then tacked it together before calling it a night.   Next week she'll easily get a border attached and then move along to soldering this! 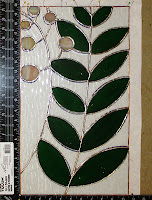 Melissa not only finished wrapping her background pieces for her Fleur De Lis Window but she got it tacked together as well.   She made sure that everything was laid out perfectly before applying the lead and now she'll be able to grind the background pieces to the 4 FDL's without having to worry about anything growing or shifting out of place. 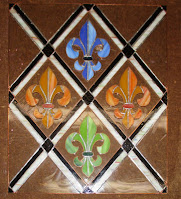 Roxane's Nativity Scene will have two other panels that match which will be mounted one on each side of this window but they haven't been drawn up to the correct size yet.   This week she started grinding everything that she's already cut because until I get those patterns ready we don't know what will happen with the sky.  Hopefully that will be resolved when she comes back in. 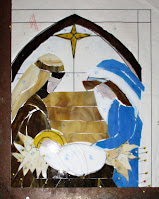 Linda L had to make a major decision this week regarding how many borders she was going to put on her Tree by The Waterside Window and what colors they would be.   We ended up photoshopping together some  ideas and then picked a winner involving a small clear inner border followed by a thicker border that matches the water. She's taken the final border home to wrap so that she can tack and then put a finished solder bead on this when she comes back in. 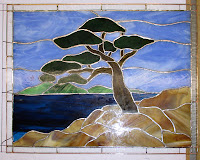 Ann was able to use the pattern that Melissa finished using earlier this week and started cutting all of the straight line cuts that make up her diamond background.    She's ready to begin grinding and then she'll do the same exact thing that Melissa did this week-- wrap and tack together all of her pieces save four the four diamonds that the Fleur De Lis' will be cut into. 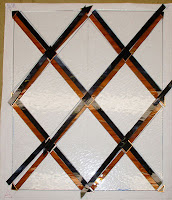 Susan D spent the day grinding her Love and Hearts Window and it fits together to the utmost perfection.   The hand writing matches the pattern so well that you can't even tell it's been cut!  What this means is that Susan is set to begin wrapping her pieces when she comes back in next week.

Martha almost has her third Franklin Street Light Window completed-- there are only a few lines left to go on the border before this is finished.  Look to see this among our completed windows in our next post. 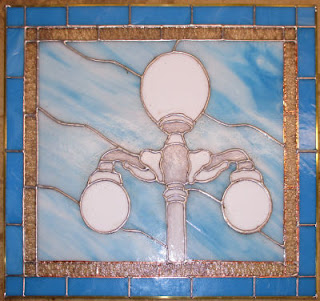 Cheryl is making a Franklin Street Light Window of her own and she's finished cutting her glass and ready to begin grinding it.  She's using an antique green glass background that she got from Martha which is unavailable now.  It's a shame because everyone is asking for a piece f this after seeing it! 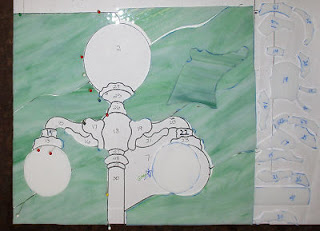 Mary's got the front of her Magnolia Window all soldered and will be working on the back side when she comes back.  I'd say that there's a fairly good chance that this will be finished when we see it again next week. 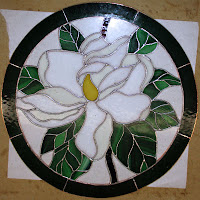 Mary Grace got all of the pieces ground for her Address Window and is now ready to begin wrapping.  It won't be long now before she picks out a border and gets ready to solder!

Jeanne L got her first border cut, ground, wrapped and tacked into place on her Fruit Bowl Window and then got her final border cut and ground as well.  She's taken the pieces for her final border home with her and hopes of coming  in with them all foiled and ready to be attached next week. 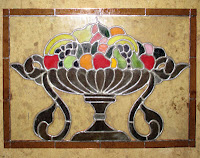 Lastly, Tracey  finished working on her Butterfly Lawn Ornament but I neglected to get a picture of it which is too bad because the colors she picked were superb.

And there you have it.  We have a lot of pieces still in the construction phase so there will be a lot of completed projects in the weeks to come so be sure to drop on by again!