What is the 10/30 Rule?  It's a simple phrase that will keep you accountable and motivated to bring every project you make even better.  Simply take the 10 extra steps or 30 extra seconds to do what you are doing correctly and you will save more time later on down the road plus end up with a project that looks better.  Try it, you'll like it.  Guaranteed.

Cheryl's Address Window was completed this week and her soldering is superb.   She completely understands that slow and steady is the only way to make the lead flow smoothly.   Soldering is something you just can't rush no matter what kind of  hurry you're in.

Helen finished up two pieces this week-- another beveled Cross Suncatcher and a Pumpkin with wire work and some 3D leaves tacked onto it.  Two beautiful suncatchers from our newest student who worked for the most part on these at home-- that's accomplishment! 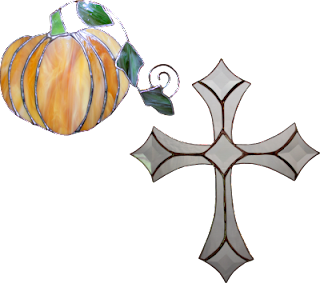 MiMi has been working on this exquisitely detailed Butterfly Window at home and this week she brought it in all tacked together and ready for borders.   After deciding on two complimentary colors we then cut the glass into strips and cut their lengths down to make the perfect border pieces.  Before she left she got a brass channel added and that leaves just the backside left to be soldered. 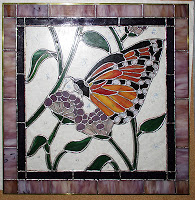 Susan D started work on a Love Window and with all of her pieces cut out she's already begun grinding it.  Perfect cutting and fitting is very important in this design because the neatness of the letters is the end result of perfect grinding.  As you can see Susan is well on her way towards a window containing perfect penmanship.

Beth began working on a large Turtle Suncatcher and it's very detailed indeed.   Still, she got it all cut out and is ready to begin grinding all those pieces to achieve one perfectly fitted Turtle!  there are some optional toenails for this piece but I think we're going to leave them out to save stress and strain on Beth! 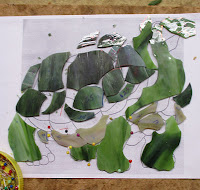 Linda F is now a mixologist since she's working on three mixed drink ornaments.   The first two have been slightly redesigned while the third is her own pattern.  I love her olives-- probably because they're a PITA to do and anything involving extra work pays out handsomely in the end!

Linda L had a broken piece of sky glass which could have been problematic because the sky glass isn't made anymore and she didn't have any big pieces remaining after she finished cutting.  So what to do?  Alter the pattern!  I'll bet you have no clue where the extra piece is that allowed us to use the broken piece of sky without it looking like a break. 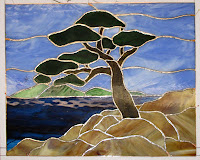 Mary Grace began an Address Window of her own and she's using a randomized background which means that we DON'T want the background to have a grain that matches throughout the piece.   To accomplish this she simply mixed up all of the pattern pieces and placed them any which way on the sheet of glass that she picked for her background.  She's got this ready to be ground already!

Roxane is a cutting machine.  Her Nativity Window is moving along very quickly and it wont be long until she moves on over to the grinder.   She was a little unsure about the colors on Mary's clothing but combining blue and white is the only thing you have to do to make it look like Mary.  The placement of those colors really doesn't matter. 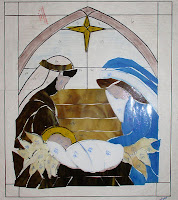 Cindy made incredible strides on her Geometric Window.   She wanted to add some more colors so she even chopped up some of the larger pieces so she could add more detail (and thus color) into this design.   Amazing. 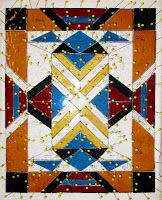 Angie's Pumpkin Window was tacked together this week and then she got the first border cut, ground, and attached as well.  She only has one border left to go and then she'll be ready to finish this massive project well in time for Thanksgiving.

Melissa's Fleur De Lis Window is also coming together quickly as she wraps all of her background pieces.  There's a good chance she'll be able to tack this together next week and then she'll only need to cut the background diamonds for each of her four Fleur De Lis. 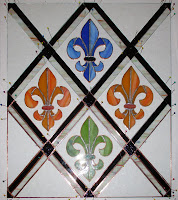 With the front of her church all soldered and the back side almost completely finished, Belinda is just about set to attach the lead cross we made (as seen to the right of her window) and call this a completed church!  There's no doubt in my mind that she'll have this easily completed upon her return.  I also want to try something we normally don't do-- we'll see what Belinda thinks...

Ann's four Fleur De Lis' have been wrapped and tacked so she's ready to begin cutting out her diamond background pattern.   With a little luck that will happen next week (if the pattern becomes available which I think it will) but if not then she'll surely begin it the following week.

Jeanne L got the front side of her Fruit Basket Window soldered and next week she'll bring in the glass she plans to use for her first border so we can strip it and get it all attached.  Jeanne has used 1/4" foil on this window which will give it a much thicker lead line and thus a Lead Came look.  I'm even going to recommend finishing it in silver (perhaps greying it a bit) to complete the illusion

Jan has got all of her Poodle Window ground and has begun wrapping her pieces in copper foil.  She's missing a piece here and there (which is standard fare when dealing with a lot of pieces in a window) but we'll easily fill them in once she tacks this together.  After that there are just a few background pieces and a border left to cut to finish it all off. 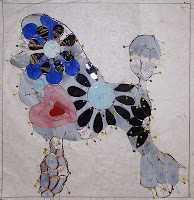 After Mary got her Magnolia tacked together she set upon bordering it with a nice dark green glass.  Round borders are more work that straight ones but once you know the secret to grinding them they can still move along pretty quickly as evident by the fact that Mary got her border cut, ground, wrapped, and tacked all inside of one class.  This flower is now ready for its final solder. 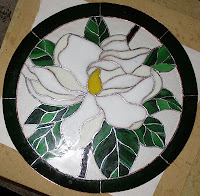 After a little work Martha got her two borders attached to her latest (3rd) Franklin Street Lamp Window.   For some reason the glass didn't want to cut easily (sometimes it happens) but as always, Martha persevered and the job done got done. As much as I loved her first one I think I like this color scheme the best. 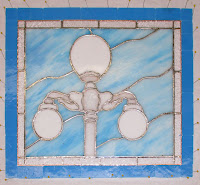 Shawn started wrapping all of the pieces that make up her Mario Window just in time for his (Mario's) 35th birthday.  She's wrapping this in black backed foil so she can finish her lead with black patina because we think that cartoon characters look best finished in black rather than copper. 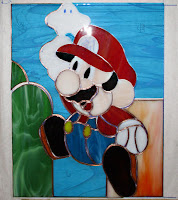 Shelley was originally going to go with a border made up of many different colors but when she put all the glass around her Address Numbers she felt that the viewer's focus went to the super bright border rather than the numbers.   In the end she decided to go with a nice Baroque Blue glass that has a bit of pizazz all on its own.  I think its a great choice.

Sheri is soldering her Fractured Rose Window and now that the iridized glass is in place you can easily see this window the way it's supposed to look.   I have a sneaking suspicion that this will be completed when she comes back in. 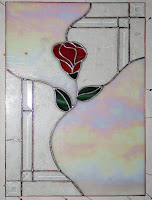 Susan R finished grinding her Sunflower Heart Suncatcher and then wrapped all of her pieces as well.  The missing piece that you don't see in the picture was the last piece to be wrapped and was in Susan's hand as I snapped the picture.   This is another project that will no doubt be completed next week. 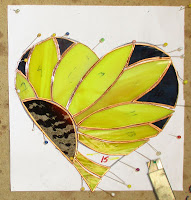 Tracey moves like a blur with a high degree of precision!  She came in, traced out a butterfly pattern, cut all of the glass and then ground it all as well.  Look at that fit!  And half  of it is wrapped as well!  I think it's safe to say that she's really got this stained glass thing down now. 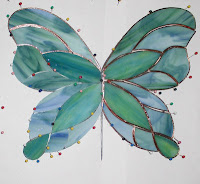 And guess what?  Annette is back already!   She sure surprised me when she walked in the door looking fantastic (Not that she normally doesn't).   She took her time tracing out and then cutting out her paper pattern and then called it a night after deciding on what glass she'll be using for her large Fleur De Lis when she comes back in next week.  It's great to have her back in class so quickly and I have to say that I'll never think about Wolverines without laughing from here on out!