Our tip today is about grinding your border pieces after they've been cut.  So many students fret so much about the pieces lining back up that they grind one piece, wash it, dry it, and then put it back into place.  This is a terrible habit to get into.   Look at it like this: when you wash clothes do you wash them one piece at a time?   Of course not.  When grinding borders take all of the pieces from one side of your window, skim each of them at the grinder, and then dry them all off and put them back in place.  If your border has pieces made up of different sizes then the opposing side will quickly tell you how they should be arranged.  Grinding borders this way turns a 30 minute task into a 10 minute task.

Now then first up this week we have Beth's Turtle Suncatcher which really turned out to be a striking piece.  Her lead lines are even all throughout her turtle which means that her grinding was spot on.   Since this is only her third piece with us I have to say that she's really gotten the hang of this. 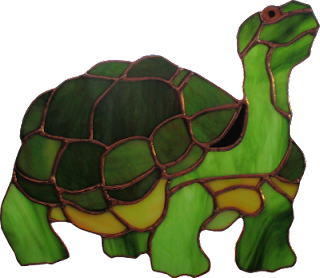 Helen made this Fleur De Lis Panel insert and only needs 5 more to completely fill in the panes to one of the windows in her house.   If the other five turn out anywhere near as good as this one did (and I'm sure that they will) then Helen is going to end up with one gorgeous window! 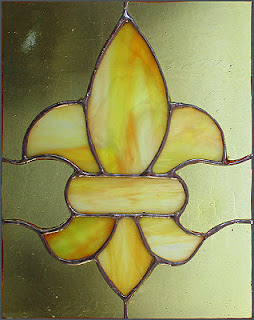 I call this one Broken Circles and I made it after I saw a piece of jewelry with a similar broken design.   I had to strengthen it with extra pieces so that it could be done in glass  but I still like the fact that I was able to complete this using nothing but scrap glass thus lightening the load on our shelves.  Also, I'm a sucker for broken items when it comes to art. 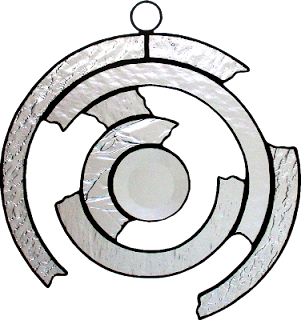 Cindy has begun a pair of beveled windows for two of her transoms and the first one is already, cut ground, wrapped and ready to be soldered.   Yep, these are definitely going to be quick pieces for her.

Martha started working on a Pelican Window and already has her sky and the top head of the bird cut out as well as the wooden post that the bird is standing on.   There are still a lot of pieces left to cut out but she's already moving along at a breakneck speed.

Sheri's Koi Fish Window has THE most perfect lily pads in it.  We have an idea of what she's going to use for her water but since we're going to have to order it I believe she'll be cutting her fish out when she comes back in.

Betty is having Santa show his face again as she works on this large Santa Moon Suncatcher.  It's a different pattern from the last ones we've seen done in the past and Betty has it fitting together wonderfully.  Ho Ho Ho. 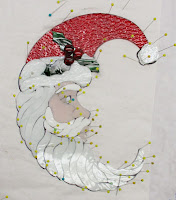 Bee (Belinda) has begun work on a new Circular Birds on a Branch Suncatcher.  With one of these already under her belt I have no doubt that this will be finished quickly for her.  After this perhaps we'll see a dog in a tub.

Linda F's Pumpkin Cornucopia is almost completely ground.  She's considering what to do for her background glass but I think she shouldn't worry about that until her subject is tacked together.  That said, I'm leaning more for a clear textured background although Linda be be leaning in another direction.

Mosquitoes-  I hate 'em!  Kerry is making three Mosquito Suncatchers and got all three cut out in just one night.  He's halfway finished with grinding the first one so I think we'll see him at the grinder next week finishing off the last two of these blood suckers! 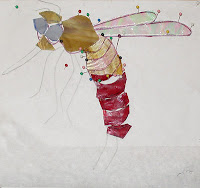 Mary Grace has her Address Window all tacked together and she's ready to start soldering.   I was impressed at how easily she handled the border on this.  After it's soldered we'll get a channel on this and call it complete.

This is the back side of Shawn's Mario Window and since she soldered all of the front side last week and a good third of the back side, I'd say that this will be going home with her when she comes in again.   The finishing flag that Mario jumps on at the end of a level is just barely out of sight now! 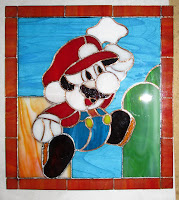 Melissa has everything cut on her Quad De Lis Window (I love coming up new names for this each week) and will be ready to start soldering it before you know it.  She hopes to have it completed in just two more weeks and I am absolutely certain that she'll have it done in time. 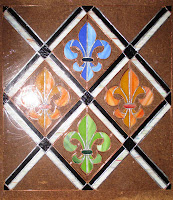 MiMi's Combat Vet Window got a double border attached as well as some channel and it's looking oh so fine!   With the front side completely soldered MiMi wanted to take this home to finish it off during the week.  She'll bring it back in for a picture when she returns and then it's honeycombs for her. 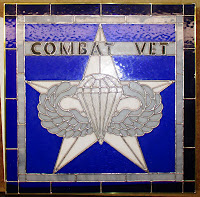 Angie is on a Dragonfly kick as she cut ground wrapped and tacked together four of these six piece Dragonflies.  I'm not sure if they will be lawn ornaments or suncatchers but I've played this game too many times too many times in the past and know better than to make a guess that turns out wrong.  We'll find out what these become when she comes back in two weeks. 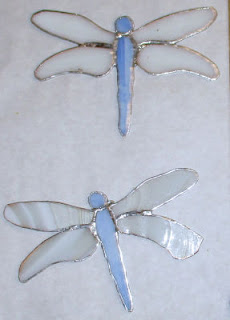 Lara got her border attached to the third panel of her Flower and Leaves collection and is ready to solder the back side now.  There's little doubt in my mind that this window will be completed when she comes back in-- that's why I've already drawn up her cow pattern.  yep, and wait until you see that!

Look at that sky.  Even though it's not been ground yet the sky has a life of its own because Jeannette cut each of the pieces from a single sheet of glass after placing the pattern pieces the same way that they line up on her pattern.  The result is a sky that completely flows together seamlessly across the width of the window creating seamless cloud swirls.   Beautiful. 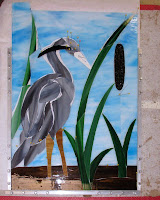 Jan is nearing the finish line now on her Flower Poodle.  All she needs is a border or two (I'm not entirely sure what her plans are here) and then she'll be set to solder.  Since borders are so easy to do I hope she picks two. because this will look great with two. 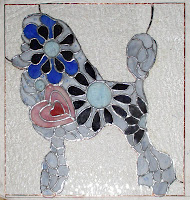 And here's Ann's background for her rendition of the Quad De Lis Window.   In just one class she got it all ground which means that she can begin wrapping this when she comes back in.  After that she can easily cut the 4 diamonds to fit her Fleur De Lis' and have a window that lines up perfectly from top to bottom. 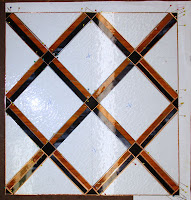 Cheryl's Franklin Street Light Window is quickly nearing completion now that she has her two borders cut.   The smaller, inner border has been attached and her second wider border will be attached when she returns since she's taken the pieces home to wrap.   After that there's just some soldering to do.  I'm expecting this to be finished in two weeks with plenty of time to spare. 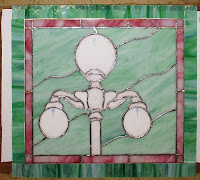 Barbara has her LSU window all set for solder and since she's taken it home with her it might possibly be finished when it walks back in the door with it.  It all depends on how busy her week at home is.  Finished or not, it looks great already!

Annette's larger Fleur De Lis  has been cut and ground and she's nearly finished with the wrapping  process of this FDL.   This is going to be a LARGE window but there are only a few pieces making up the background so it should be fairly easy from this point on. We'll see just how this works out next week. 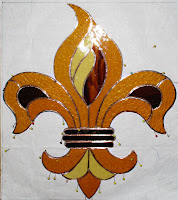 Linda L is working on not one but two Address Windows.   Of course they aren't identical, but the idea carries through on both of them.  She started cutting glass before she left class and these are fairly simple window for her so I'm expecting them to be done quickly. 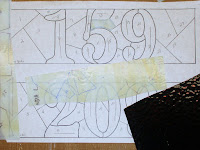 Susan D has begun a nice large 28 x 28 Geometric Window of which she traced her pattern perfectly (although I don't have a picture of that to show you).  I always say that a window can only look as good as the pattern pieces that make it up and if that is truly the case then Susan is going to have a WONDERFUL completed window in this. 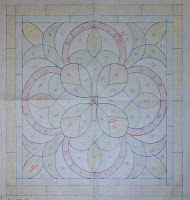 And here's the pattern that Lisa began working on this week.  It's a Tree Of Life which she now has the pattern traced and cut out meaning that she'll be able to start cutting glass anytime she wants.  And that's exactly what she's doing at home this week. 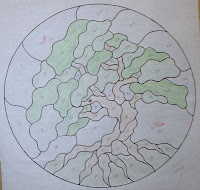 That wraps things up here.  Come back and visit us next week to look at new projects started and old ones completed.