Here in the south Dragonflies are very popular.  We've seen a lot of dragonfly suncatchers being made but most students have issues getting the notches in the lengths of the body to line up nicely.  Here's an easy was to fix that problem.

See that long notched body piece in the bottom center of the dragonfly in the pattern below?  Most people try to follow the curves with their cutter which inevitably ends up leaving them with an unsymmetrical body. The trick is to cut it straight along the widest points of the body. In other words, follow the red line I've drawn along the body. 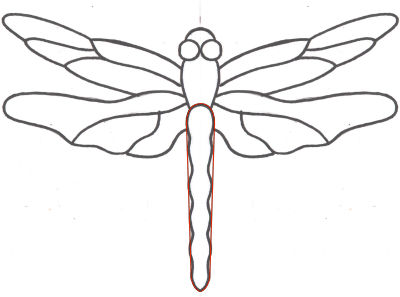 Once you've cut the piece it will be un-defined as in the picture below.  I suppose it's acceptable (if you're an EXTREME beginner) but in under one minute you can have it looking FAR, far better. 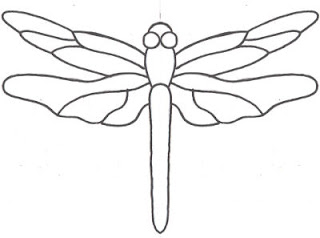 Just push into the piece with your grinder wheel at the spots indicated by the arrows and you'll begin to get that all important detail.  Once done, flip your piece to the other side and place the same indents directly opposite the first set you made. 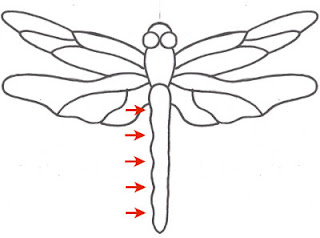 So there you have it.  A perfect dragonfly body with very little work.  Remember that smaller, intricate details are usually achieved at the grinder, so examine your patterns and learn to plan for that before you start cutting your pieces. 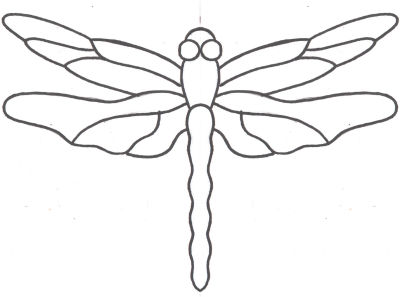 Speaking of smaller, intricate pieces, MiMi put the finishing touches on her Combat Vet Window this week making it look even better than ever.   She even attached a lead figure to the chute for an extra bit of pizazz.  To form the body we found a paratrooper silhouette, traced it onto copper foil, cut it out and added lead to it.  Once it was peeled off of the plate glass that we soldered it on we simply tacked it into place to the window which made it like the icing on a cake.  MiMi's work is top notch on this window, wouldn't you agree? 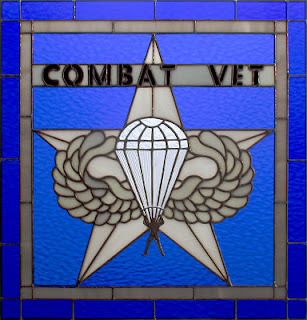 Check out Mario!  Shawn's rendition is top notch and I think I'll have one of these in tow the next time we do a show.  In the end we painted the eyes on the cloud and the red 'M' on Mario's cap.  I have to say that this makes me want to play Super Mario Bros. 3 again! 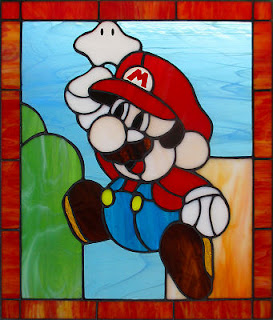 Cindy's Colorado Window captures the logo perfectly and that mountain with its snow cap really shows off her abilities.  This looks simple enough but it's certainly not a beginners pattern by any stretch of the imagination.  Look at that snowcap! 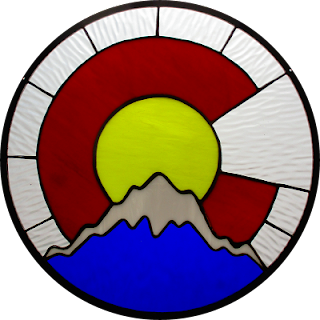 This was the Geometric Window that Cindy completed two weeks ago that I never got a picture of.  Luckily enough she still had the window at home and brought it in so I could share it with you all. Stunning. 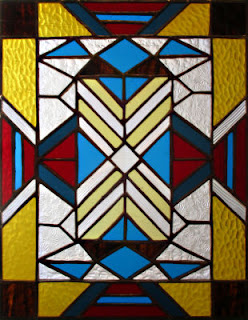 Here's Cheryl's interpretation of a Franklin Street Light.  She did a great job especially when you consider that this is only her second window with us.  Way to go! 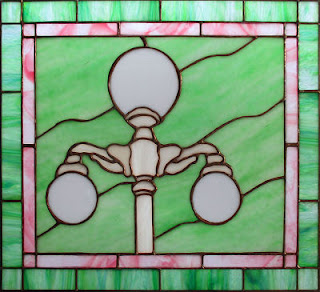 Angie put the finishing touches on 5 different Dragonfly Flower Pot Ornaments, two of which are pictured here.  Whether these are made as flower pot ornaments or suncatchers, they always brighten up the area. 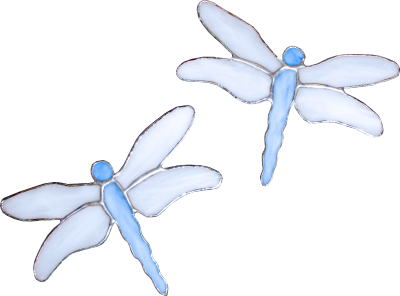 Helen made this butterfly while at home and finished up the soldering while in class.  She wants to work on her own as well as in class and I've found that that's always the best way to learn.   When you don't have the teacher at hand you are forced to make decisions on your own which is paramount to building your skills. 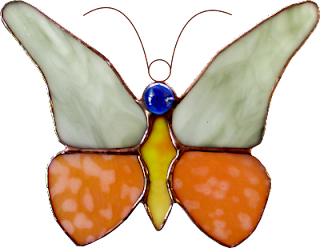 Annette completed the work on her second (large) Fleur De Lis and is now ready to join the large one to the small one with the background glass.  The shape is odd but it fits inside an existing window for a friend of hers.   Since this is so large Annette is wrapping her background glass and border pieces with 1/4 inch foil to help make it more stable.

Cindy also began working on this crab Tray  She's already made this in the past and she's flying through her second pass at what will be a 3D tray.  Look at the inner curves on those claws. 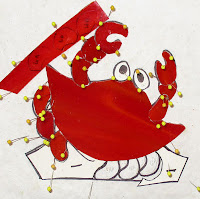 Kerry managed to get two of his three mosquitoes ground and you know what Meatloaf has to say about that--  "Now don't be sad 'cause two out of three ain't bad".  There's going to be a lot of wire work on these but luckily the wire will be thin making it easier to work with. 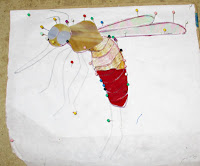 And Bee is well on her way to wrapping her Birds On A Branch Window hanging.  The small pieces don't scare her and her pieces fit together as precise as can be.  This is becoming a popular piece to make here in our classes and Bee's excellent work will only make it more popular.

Linda F has her Pumpkin Cornucopia Window all soldered and will be ready to wash and color it when she returns for her next class.  She might very well have had it completed this week but she had to leave early for an appointment.  We'll surely be seeing this finished and then get some work get done on her next project when she returns. 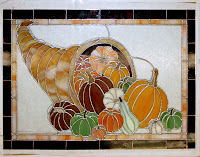 Ann got her background wrapped and tacked together which allowed her to start cutting the actual background glass for her Fleur De Lis'.  One is completed (and tacked) while a second one is almost all ground now.   At this rate I'm thinking that she might even get her border cut out next week. 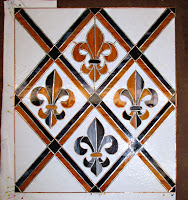 Linda L has her first Address Window ready to be foiled after which she'll attach a border and solder it.  Talk about paying attention to the lines-- those numbers look like they've been typed out on a type writer!

Lisa's Tree Of Life Window is looking incredible before it has even been completely cut or ground.  She's mixing two similar but different greens for the leaves of the tree and the glass she's using is perfection.  I'm really loving this design. 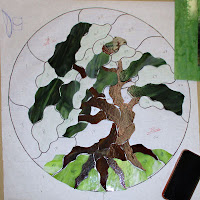 After completing Mario, Shawn anxiously began her Christmas Ornament Window.   She's started with the bottom right ornament and next week we'll see more of them cut out.  People have been going crazy over this pattern since they saw it hanging on the wall waiting for Shawn to start it.

Martha's Pelican Window is another example of glass perfection.   That sky, as dark as it may first appear, makes this window shine because it's not quite what most people would pick for a sky.  I've had similar results using purples for sky tones.   And just look at that piling that the Pelican is sitting on.  Gorgeous.

Mary Grace is working on her second Address Window and her colors are vivid and EASILY readable.  At this rate she'll be working on her third Address Window before you know it.  She got it all foiled, wrapped and tacked this week and then got the border cut as well so next weeks progress will surely impress our readers.

Roxane's Nativity Scene is still missing its sky but the rest of it is ground and is now being wrapped.   Once it's tacked together I'll draw up the two side panels that will make this one long window and Roxane will know how much blue will be needed and just what shade to cut it from. 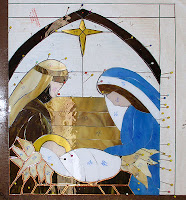 Susan D has been busy grinding her large Geometric Flower Window and she's got two of the corners fitting together nicely.   This window is bigger than 4 square feet so she'll also be wrapping this in 1/4 inch foil for added strength.  Big windows demand extra stability so we'll also be using a heavy zinc channel on this as well. 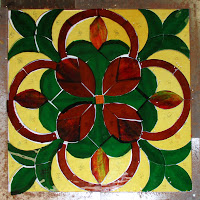 Sheri's making steady progress on her Koi Window.  She's still undecided about what she'll use for the water but she has options and is eying numerous pieces of blue glass.  Next week she'll begin cutting out the Water Lilies and after that she'll make her final water choice.

Susan R just needs to cut out the whites of her Owl's eyes and then she'll be taking this home for the last time.  This surely is a cute and colorful Owl who will look a bit more lively once he has his eyes! 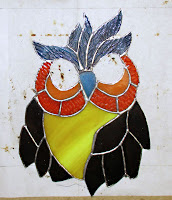 Tracey started work on a Sunflower Heart and she's already set to grind it.  To be honest, it doesn't look like that will take long at all since it looks like it's been ground already!  Blue and yellow go together so well, I suppose that's why everyone loves this design when it's finished. 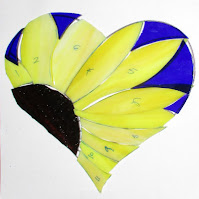 Our last Window is Melissa's Quad Fleur De Lis.  It's all cut out and tacked together with the front side nearly completely soldered.   Yes, the end is near and Melissa says she's ready to move along to something new.  I can't wait to see this hanging. 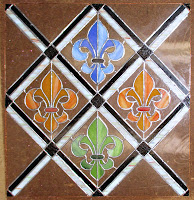 Before ending this I have to say that Tracey got away yet again without me taking a picture of her Butterfly Lawn Ornament.   She IS a sneaky one.  And Mary as well!  She's working on a Dove Window that will knock your socks off when I show it to you next week.  See you then!
Paul
Bayou Salé GlassWorks
Posted by Bayou Salé GlassWorks at 7:25 PM