Ohh, The Cow Is Here!

Our tip this week involves knowing how much is too much.   In the piece below many students try to make the cuts on the left or right sides of the piece in one long, swerving cut.   What you need to remember is that the more your score line changes direction the more likely it is to break incorrectly.  In the pieces below you should cut the right side out by traveling across the points of each curve without actually following the curve.  We call this cutting 'point to point'.  Since the high points on each curve all line up (even with the slightly curved bottom right) we can join the point to point cuts into one single pass as indicated by the red line in the center illustration.  This line is smooth and doesn't twist erratically from left to right as the pattern demands and will break easily.

Always remember that not all cuts should be cut in one pass!

In the final image on the far right you can see how three more cuts (notice the red lines again) will make your glass match the pattern.  The left side should be approached using the same basic method.  Try to keep all of your cuts simple and you'll find yourself breaking far less glass. 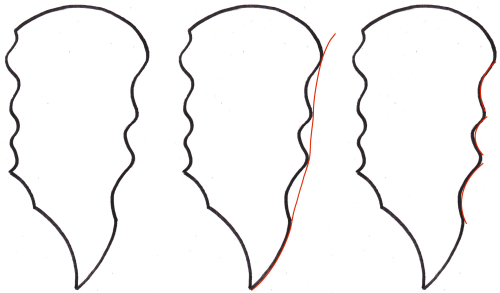 So then, first up in our completed projects is Lara's Flowered Cow which is incredible!  She's named her Clementine and she's the envy of all cows with that bouquet of colorful flowers on her head and those STUNNING eyelashes.  Look again because I'll bet you missed them!  Precious isn't a strong enough work for this piece. 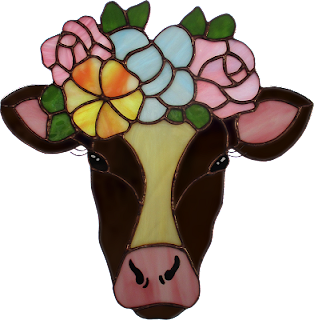 Martha's Dragonfly Window is now complete and you can tell by the wings that the dragonfly isn't an overlay that was soldered on top of the window as many people thought it would be because of the way the background was cut and ground before adding the dragonfly.  In the end, this is perfection. 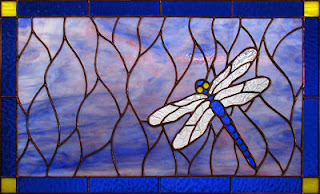 Ann's variation of the Quadruple Fleur De Lis Window is just as fetching as Melissa's was.  The extra black border with the amber corners are absolutely perfect which means that it matches all of the work that Ann put into this window. 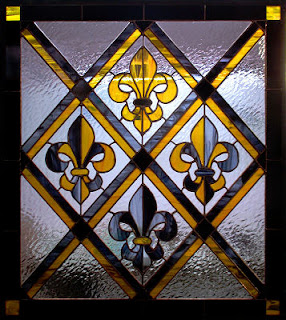 I knew this was going to be cute but the end result of Cindy's Crab and Corn Tray is wonderful.  There's a crab on one side and two ears of corn of the second.  To really appreciate this I had to take a picture of both the front and the back although I'd be hard pressed to determine which side is which because they both look like front sides to me! 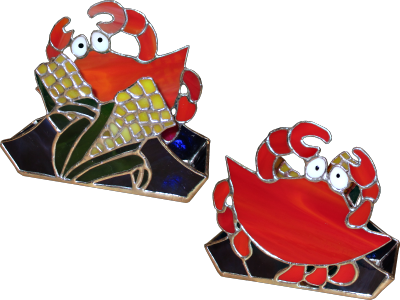 Helen completed her first Saints Window and although she said it was a tough for her I think she did incredible work on it.  There's a Nicholls Window in her future but I don't think that one will have letters in it.  We'll see that a few weeks from now.

Linda L put the finishing touches on not just one but two Address Windows.  These make perfect gifts because there's no doubt that they will be used and because they just plain look great.  Of course that all comes down to a strong work ethic based on perfection. 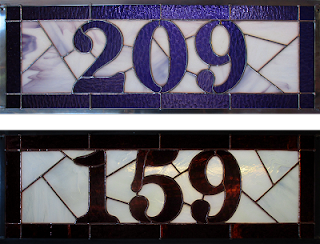 Betty made five more Santa Faces this week but in more traditional colors.  Altogether she made twenty some of these things (think high twenties) and she now says that she's all Santa'ed out and won't be making any more.  I'm thinking that may be the case for this year but I see more of these further along on her horizon. 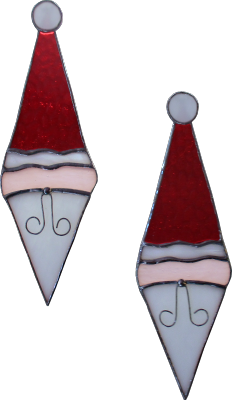 And now we look at works that are still in progress starting with Cindy.  We saw up above that Cindy finished work on a Crab and Corn tray and this week she also got all of the pieces to her Frog and Lily Pad Tray cut and ground.   I just love that frog and have a sneaking suspicion that we'll see this completed when Cindy next returns to class.

Here's Jan's latest panel whose pattern fits on a piece of letterhead paper.   She loves making these small windows with just enough detail to make you say, 'It's HOW small?'   She's closing in on finishing the grinding on this and when it's done she's got a Santa Window weighing heavy on her mind.

Linda L also worked on this Hummingbird and double flower pattern and, as you can see she practically finished working on it.   She'll wrap these pieces and then be set to tack this together.   I'm 99 percent sure that she said this will be a window but there's that nagging 1 percent of doubt that makes me hate getting old because I know we had a MAJOR discussion about it! 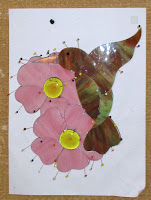 Barbara began working on this Angel Suncatcher during class and even finished cutting it.  I was particularly impressed with how nicely she cut the face since most people end up cutting off the nose and making it flat but this Angel has features as well as heavenly blonde hair. 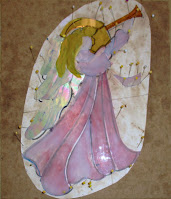 Kerry's tracking way back to his first project with us as he remakes his Cross Window.  The color scheme is completely different this time around and since it's dark it will be hard to see what those colors really are until we get some back light on it which will be real soon now.

Angie's Pink Angel was turned into a Window and the end result is going to be spectacular.   This week we saw her cut her background, grind, wrap and tack it, and then do the same to her border as well.   I can safely say that this will be completed upon Angie's return. 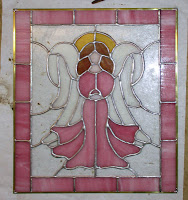 And Susan R didn't waste any time either as she had only a pattern when she walked in the door and then ended her class by walking out with a window all tacked together and ready for its border.  And I have to say that her straight cuts that were all made by hand are some of the straightest cuts I've ever seen! 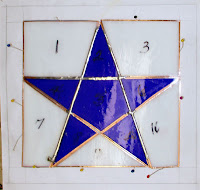 Mary's Dove and Cross Window pattern had so many of our students saying that they loved it but that the number of pieces scared them away from considering making it.   This week (2 weeks in) Mary is already nearing completion on the center part of the window.   I don't think the number of pieces worry Mary at all anymore. 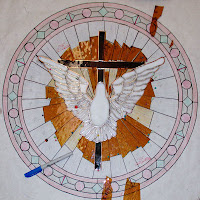 Linda F tacked together this Mardi Gras Mask and then cut her background out for it so she could use this as one of her seasonal Yard Decoration Panels.  If she doesn't have a complete collection of Holiday Panels yet I'm sure that she soon will! 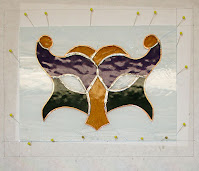 Lisa not only has a firm grasp on her fully ground Tree Of Life Window but she also managed to work on a Bass 'suncatcher' that she'll mount onto a piece of driftwood.  There's a lot of green going down in these two projects it varies and flows together beautifully in both projects.  Also, that Tree Of Life gets me each time I see it.

Shawn has two ornaments tacked together for her Christmas Ornament Window and has a third one well under way.  She has 11 ornaments scattered throughout this window although she's not sure if she'll have it finished in time for Christmas I think she's going to make it.  Call it a hunch. 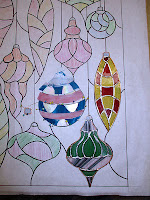 Although it's hard to see, Sheri is making great progress on the grinding of her Koi Window.  She's been at odds trying to determine what to use for the background for this window and after playing with numerous shades of blue she seems to have settled in on a textured clear which I think is a great idea. When you can't decide, go clear!

Jeannette was so close to completing her Heron Window that I have no doubt we'll see it completed upon her return.   This is a mirror image to a window she made not all that long ago and the two will make a beautiful pair. 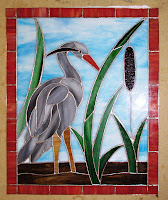 With just a zinc channel needed to finish off the framing of her Fruit Bowl Window, Jeanne L is ready to wrap this up and call it ripe and ready.  She's foiled this in 1/4 inch foil to give it thicker lead lines which helps give the window an antique feel and she had no problems at all dealing with the extra lead that had to be precisely melted to give it a nice even bead throughout.   This will surely be hanging up with some light behind it when she returns. 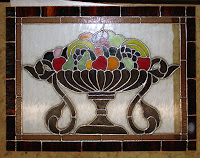 Melissa's small Fish Panel made a ton of progress while she was in class and just today I got a phone call from her asking if she had left her soldering iron at the shop since she couldn't find it in her stained glass box.   A quick look around the shop revealed that she did in fact leave it here and I've come to the conclusion that she has this totally ground and wrapped now.  That means there's not much left to go on this. 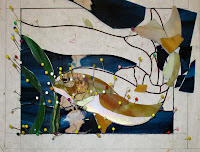 Susan D is also soldering over 1/4 inch foil and she has one side completed with a good 85% of the second side soldered.   This window is huge and when we see it again it will be finished and have light behind it!   What a difference that will make because you really can't see the colors that make up the glass that she's used in this. 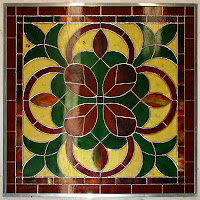 Finally we have another look at the multitude of Hexalongs that MiMi cut out this week.   She's using every type of clear textured glass imaginable and is practically able to trace out the Hexagons onto her glass without using a pattern!   I've guesstimated that she'll need about 1,800 hexagons to complete all her windows and MiMi was thinking somewhere around that number herself.  The good news is that she's made a great dent in that large number already. 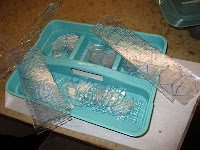 Well now, this was a busier week than I initially thought because it took some time to edit all of the pictures to put this post together.   I'd say that classes are back in full swing now.