Quarantining With A Poodle

Pins are essential part of the stained glass grinding process because if your pieces are free to move all over the pattern you can't assume that they will line up correctly when you think you are finished.  Nowadays all of our students agree but I still see people pinning pieces incorrectly.   If the pins are placed at an angle the glass can (and will) easily ride up on top of the pins thus defeating their purpose.  Below is an example of a piece of glass that is not secured.

Next we have an example of superior pin placement.  The pins are straight and will anchor the piece firmly as neighboring pieces are added and removed throughout the grinding process.  Also remember to push the pins thoroughly into the work surface.   Your pins need to go at least 1/4 of an inch into the work surface to truly hold your glass in place.

Now Jan did a great job on this Poodle Window and I have to say that her soldering has become a top notch affair.  There wasn't anything to touch up on this window at all and when you take into account the size of it, well that's really saying something.   I know her daughter is going to love this! 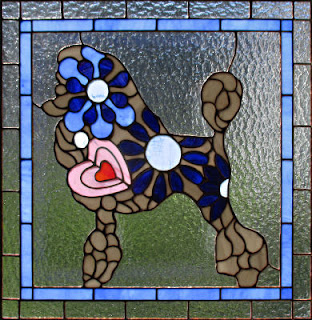 This certainly didn't take Linda F any time at all to complete.  When she came in with her window just needing to be soldered I was pretty sure that she'd finished not this week but next week.  Then about an hour and a half later when she said she needed a channel for it I told her to her go ahead and solder the back side to which she replied, "It's already soldered."  Color me as impressed as this window is impressive.  Just look at those straight, straight lines and flawless fits! 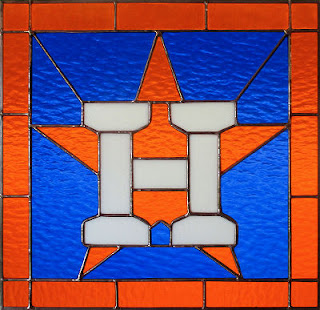 Betty came in and put tassels and hooks (which I cropped out of the picture) on her 15(!) gold Modern Santa Faces.   She had already added the wire Mustaches and Solder Blob Noses at home during the week and came to the conclusion that those mustaches take a lot of wire and time to get straight. Below we have a closeup of one of the Santa's and after that we have a group shot of the graduating class all together. 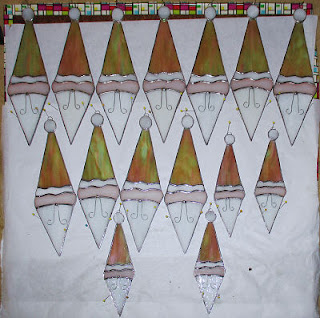 Kerry completed his second (and final) Mosquito Suncatcher which looks remarkably and unsurprisingly like the first one.  These are VERY cute and you just have to love the way the body is half filled with blood.  (It's probably mine.) 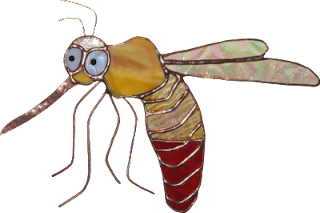 Guess who's back in town?   Rowena has emerged from her summer vacation and began working on this stunning Grey Ballerina Window of which she made major progress with in just one class.  Like I said to her, "you don't lose your skills at all because it all comes back to you as soon as you pick up that cutter."  We're still not sure into which class Rowena is going to land but we'll be seeing more of her, that's for sure.

Bee has her Dove all ready to be patinaed but she ran out of time during class because we like to let black patina sit for about 40 minutes before washing it.  Once that's done she'll add an olive branch to his beak and that will be that.  We'll see just what that looks like when we return in our next post. 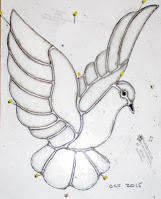 Helen worked hard on her Saints Window and by the time class was completed she only had a few pieces left to wrap before she could start soldering.  She's split her time on this between class and at home and she's really catching on fast.  This window is nearly completed!

Beth managed to tack together her Address Window and then cut and tack the first clear inner border to it as well.  Once that was done she moved along to the final wider blue border which she just needs to grind and wrap before she can start soldering it.

Cindy cut all of those corn kernels that you see below in just one class.  Not only that, she ground it, wrapped it, and tacked it together as well!  That means that there are only three rectangular pieces of glass left to add to this and then she can essentially be finished with her Crab and Corn Key Holder.

With her border added and the front side of her Quad Fleur De Lis Window all soldered Ann will most likely complete it when she returns.  All this needs now is a zinc channel around it and some solder on the back which I know won't take her long at all. 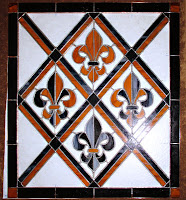 Melissa got all of her background cut out and took home strips of green glass that she'll use to border this panel.   She plans on working on this during the week and once it's completed she'll begin working on a very complex Kaleidoscope that I can't wait to show you. 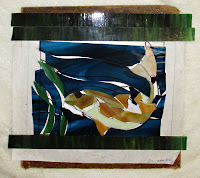 With the front side all soldered Susan D came in hoping to get a border attached to her Geometric Flower Window.  As luck would have it she was able to get TWO borders attached and a zinc channel that we added (somewhat early) so that flipping over to solder the back side would be a bit easier for her.  Don't forget that this is 36 inches tall and wide which makes it a bit hard to manage without being completely soldered. 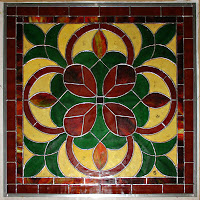 Although Lara wasn't able to make it in to class this week she wanted me to see her progress on her Cow Window/Hanging.  I loved it so much I'm posting it for all of you fine readers to see!  There will be a little dab of paint here and there to really bring this cow to life . 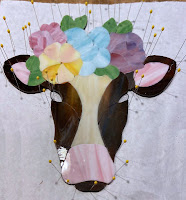 Martha had her Dragonfly tacked together when she came in and then set upon working on its background glass.   Cut from one continuous piece of glass the grain lines and pieces match up so perfectly it's hard to see what she accomplished.  That's why there are two pictures below.   The top one shows  her background as she grinds from left to right.  She's about halfway done and you can see the somewhat  repeated pattern on the right side where we've spaced them out to give you an idea of what the cuts looks like.  The lower image shows how she placed and then cut out a spot for the dragonfly after everything was ground.  She's ready to wrap! 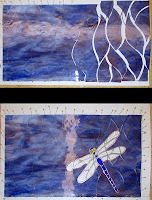 With a complete pattern in front of her, Roxane  began cutting out the left hand section of her Nativity Scene Window  This is almost 3 feet wide before the border(s) so it's a biggie but Roxane is moving along quickly with it all the while cutting very accurately.

And lastly we look at the Elongated Hexagon pattern that MiMi is drawing up for her 48 Entertainment Doors Inserts.  That's a lot of Windows!   Or was it 18?  Yeah, it was 18 but that's still a LOT of windows which means that she's going to need to cut out a metric crap load of Hexa-longs! 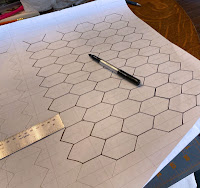