We had another Fusing Workshop a few weeks ago which gave us five beautiful pieces that I just can't ignore, so here goes.  Susan D, Jan, Martha, Lisa, and Leigh Anne all joined in for the fun that was actually spread across two separate classes.  When they came in they were all given a spot on a table with a work station that looked like this. 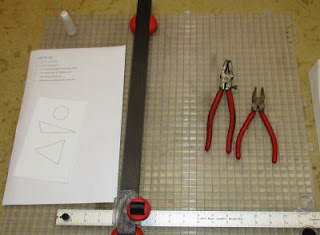 A Present Plate is actually made out of 25 pieces of glass.  Only five of the pieces (the bow itself) are not cut with the Beetle Bits Cutting System. We start with a 10 inch square of white glass which forms the actual package part of the plate and then assemble the rest of the pieces on top of it.   Next we cut two 1 inch strips that run through the center of the present to form the ribbon.  These are cut in three pieces with one of the ribbon lengths running the entire 10" height of the plate while the other two are cut into 4 1/2" strips that finish forming a  +  in the center of the plate.  If you start with strips longer than 10" you can lay them on top of the glass and mark and cut off the overhang for a perfect fit.  We then cut out a large circle and four triangular pieces to make the actual bow itself. 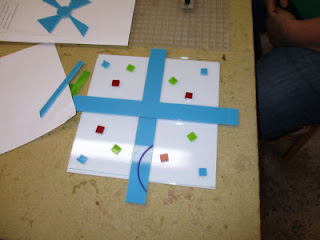 Next four  pieces of clear glass are cut into 4 1/2" squares and laid in the four corners of the plate giving us a level surface again.  The large circle is placed in the center of the plate to form the knot of the bow while the four triangles are placed at angles to form the actual bow itself.   As a final touch we cut 12 small 1/2 inch squares out of three different colors of glass and randomly scattered them over the four white 'wrapping paper' corners to add a little festivity to the present.

Here's a look at a completed but yet un-fired plate. 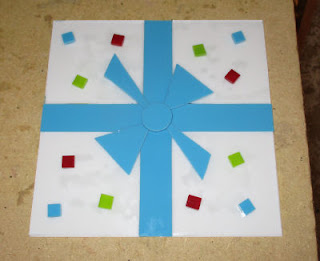 Once all the glass was cut and placed, the plates went into the kiln where they were heated up to about 1450 degrees  over a period of 8 hours so that all the glass would fuse together into one piece.  The next day AFTER THE KILN HAS COMPLETELY COOLED we opened it and had three gorgeous plates (and a quick test strip to see what color changes might occur with some new glass Russ had just received.) 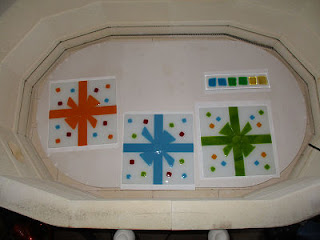 So all that's left now is to look at our completed projects.  Here's a look at Susan D's plate proudly displayed on plate stand.  Susan left her plate flat while our other students slumped theirs. 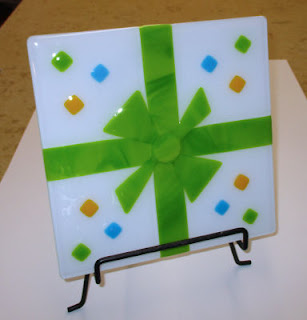 Slumping involves placing the flat plate into a slightly curved mold and then putting it back to the kiln and heating it just enough to make it form into the curve of the mold.   You can only do this step after your project has been fused into one piece of glass or all of the separate pieces would shift drastically as they melt.  Multiple firings (sometimes 3 or even 4) for one project is a regular occurrence when doing kiln work.
This is Jan's finished (curved) plate.   She used aventurine green glass for her bow and ribbon which give the glass a sparkly effect.  She also rounded the corners of her decorative squares so they are dots rather than square confetti pieces. 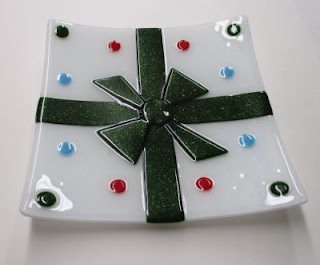 Leigh Anne made her bow and ribbon out of a bright yellow/orange glass and ended up with a real beauty!  Leigh Anne had made this plate while working on the table along with her mother, Lisa, who was working on a plate of her very own! 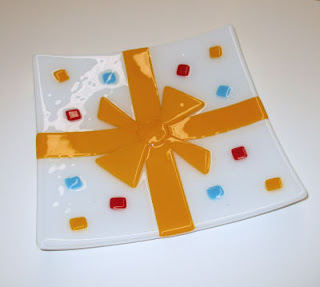 And this is Lisa's powder blue ribbon and bow plate!  Whose do you think is prettier, Lisa's or Leigh Anne's?  I know that they're both equally beautiful! 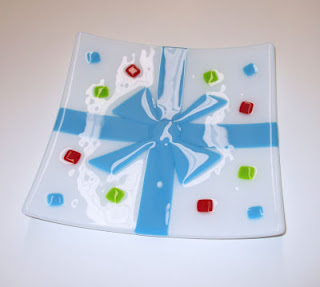 Finally, last but not least we look at Martha's lime green plate which very much resembles Susan's but Martha curved hers and changed out the blue confetti (square edges) for red polka dots. 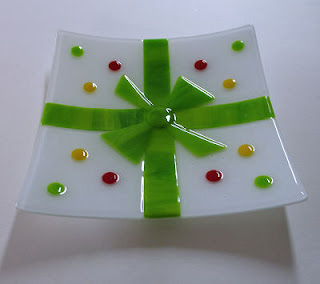 So that's it.  Everyone had fun, everyone was thrilled with their results and everyone wants to do other projects so I guess we have to call this Fusing Workshop a success.  That means that fusing classes will surely be happening in 2021!
Happy New Year everyone!
Paul
Bayou Salé GlassWorks
Posted by Bayou Salé GlassWorks at 1:34 PM