Don't Let Paul Give You Any Craft

What's the most important part of a suncatcher?  The outside edge.  Why?  Because it defines the shape of the object.  Edge pieces should ALWAYS line up and form a perfect line be it straight or curved.   Look at the examples below.  The heart on the left lines up with smooth curves and edges that align correctly.   The heart on the right is off in almost every possible way and it shows in extremely obvious ways.   Which do you prefer?  The answer tells what you should strive for in all of your work. 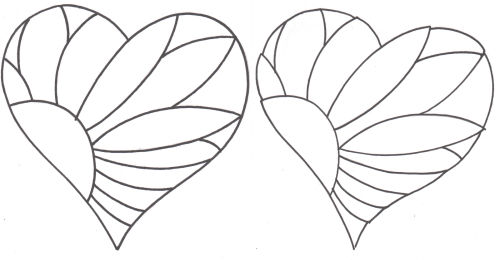 Linda L finished her LSU Lamp and it is incredible.  She did such a wonderful job from start to finish on this.  Maybe, if we're lucky, Linda will be able to snap a picture of this on the base that she had made especially for it so we can see it in all of its splendor! 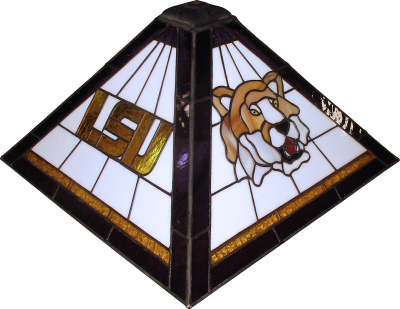 Next up we have another project that sets the bar  higher than ever .   Shawn's Christmas Ornament Window was completed and there's no doubt that it elicits a Christmas warmth when you see it.   I just wish you could see all the iridescent glass that was used throughout this window because it really makes this sparkle. 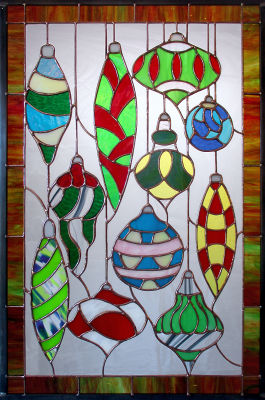 Our final completed project this week is another Praying Angel that Annette is becoming at expert at making.   That said Annette says that she has two more of these to go and then she says she's done with this design and moving along to butterfly lawn ornaments. 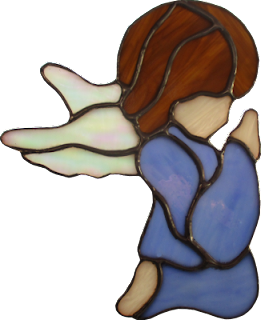 Cheryl began working on a Lighthouse Window to start the new year.  After tracing out and coloring the pattern to her liking she cut apart the paper pattern and then traced the sky onto a beautiful blue/white glass which she now has cut out and resting in its place on the pattern. 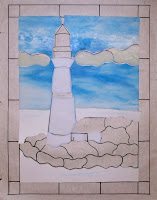 And Cindy has begin the new year by starting a veritable slew of suncatchers.  I see that we have to make an adjustment on her Fleur De Lis so I hope I can catch her in time to stop her before she wraps and tacks it together.  Okay, I caught her in time.  After having texted her I can tell you that she'll have a sturdier modified version of the FDL when we see it again next week.

Kerry got the bottom portion of his Nicholls Window tacked together and is now ready to tackle the top section which features the school mascot. Yes, this window will have a dog on top of it!

Susan R's Bird Feeder has one side of its roof ready to be wrapped and then tacked together.  She'll solder the top side of each roof section before attaching it so that she won't have to balance the entire feeder on her lap to get a level soldering surface.  We should see one side of this firmly attached when she comes back in.

Martha's Pelican Window is ready for its border and then she can solder this beast!  This is already stunning and her work is fantastic.  I just can't wait to see what color she picks out for her border.  The end is near! With all of her background tacked into place Mary began working on the intricate border that surrounds this gorgeous dove.  She'll work on the border one row at a time and she already has the thin inner red border cut and ground.   Next she's going to skip the middle section and grind the final thin outer border. It may be out of sequence and an odd way to work but it will ensure nice round lines which define this piece. 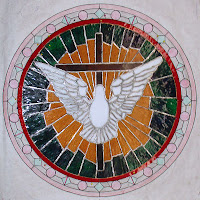 Barbara wasn't sure at all about what she was going to make when she came in.   She didn't want to do anything large so she settled on this simple flower panel.   With the flower all cut, ground, wrapped and tacked together, she only has to cut out 3 background pieces and a border when she comes back in.  It looks like Barbara's going to need to decide what she wants to make next already! 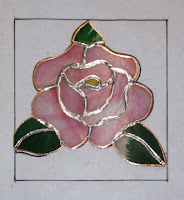 Check it out!   This is the first of many Honeycomb Windows that MiMi has been working on for the past 2 months.   She said that wrapping all of those hexagons wasn't difficult at all and that's a good thing since she has around 1,500 of them left to wrap!  This window is tacked together and ready for solder so we'll surely see it completed when MiMi returns.

Susan D is working on 2 different sized Beveled Christmas Ornaments.  All of that copper that you see will be completely covered in lead while the one on the right will have a regular colored glass border surrounding it.  These are just about finished already so it won't be long now. 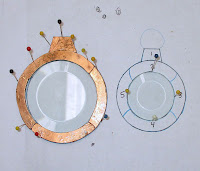 With all of the her glass attached and the front side completely soldered Bee is just about ready to call this Puppy in a Bathtub a completed project.  There are only a few lead lines left to go on this so I believe this will also be featured as a completed window in our next post. 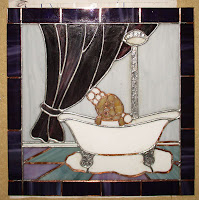 Tracey began cutting out glass for a familiar pattern of hers with a somewhat new spin.  She's taken the corners off of her square Cardinal Window and is making it round now.  She's already got most of her background glass cut out so this will certainly be getting a little more color added to it when she comes back in. 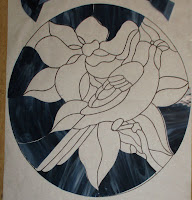 Ann started another Hand Mirror while she was waiting on a pattern to make for her next window.  She'll be remaking a cross window that she made a few years ago but she's scaling down the size a bit to make it more manageable.  We'll see just what that looks like when we return.  Meanwhile, she got all of her hand mirror cut out while her Cross pattern was being drawn up.

Lastly we look at a rough drawing of the panel that Melissa has begun working on.   Bee has worked on two of these in the past (or were there three of them?) and Melissa found the pattern charming enough to want to make one herself.

And there you have it-- the start of a new year at Bayou Salé GlassWorks!