A Goldendoodle and a Cockerpoo Walk Into A Bar...

Lately I've had more than a handful of students tell me that their foil hasn't been sticking to their glass.   If this is happening the first thing you should do is to wash the problem piece of glass and then allowing it to thoroughly dry before re-wrapping it.   Sometimes glass picks up residue that you can't see which prevents the foil from sticking.   Most times washing the glass will fix the problem but if that doesn't do the trick then you might want to try a fresh roll of foil.   Here are four foil tips that every glass crafter should be aware of:

1) Foil that has been exposed to colder temperatures usually loses a lot of its stickiness whether it's sealed or not.

2) Silver backed foil, for whatever reason, is notorious for being considerably less sticky than other foils even when it's brand new.

3) If you have any rolls of foil that are infrequently used you should store them in a zip lock bag that you've squeezed as much air out of that you can.  This actually makes a big difference in keeping your foil sticky.

4) Foil can last a good 2 years even when left out in the open.  Unopened foil can last many years as long as the seal of the packaging hasn't been broken. (Alas, not silver backed foil.)

Okay then, with that out of the way we're going to look at something that hasn't been done here yet.  Lisa found an old Lantern, unscrewed four screws, removed the clear semi-textured panels that came with the lantern and replaced them with panels featuring a Bevel and some fancy stripes.  The end result goes far beyond charming and she even managed to sell this in under a week.  It's easy to see why! 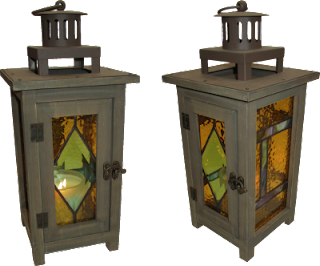 Jodie completed her Transom Window which utilized an old piece of blue glass that she had given to her.  In short, she's used an old window to create a new window which will look wonderful in the spot she made it for.  She was so worried about soldering this but she took her time and her solder bead looked, like the rest of her window, perfect!  See for yourself. 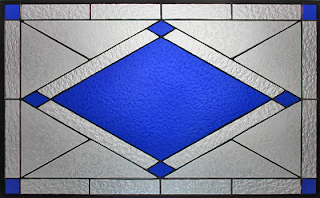 Betty's Easter Garden Gnome is as cute as can be.  She's got another one in the works and the new Gnome is holding a red, white, and blue star in his hands.  Does anyone have an idea of what holiday that panel is being made to celebrate?   More on that when we return next week. 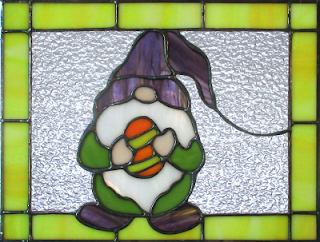 When Shawn was last in class she wasn't sure what she wanted to do so she went through patterns and ended up deciding that it was time to make a window for her husband.   She didn't have a pattern in mind yet so she cut out this cute Double Flower Suncatcher design rather than wasting away the night.   This week she finished it and then picked up the pattern for her husband's window which we'll see at the end of this post.

Sheri made this beautiful two toned orange Sunflower Heart and it is the very definition of summer.   She did all of this at home with no help from me whatsoever and that's a VERY big deal. I do believe her confidence level is at an all time high after this project. 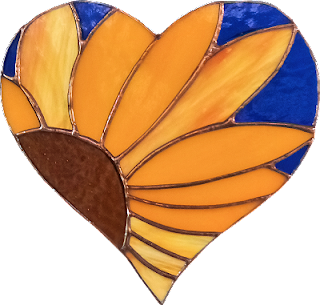 We also look at Sheri's first Sunflower Hoop.  She went over her lead with copper patina which means that she had previously sandpapered down her hoop and then applied solder to it before she attached the two sunflowers. It's a stunning pattern that we'll be seeing a lot of over the weeks to come. 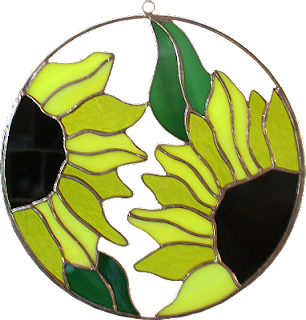 Angie made two different yet similar Hummingbird Suncatchers.   At first glance it may look like the double wings on the one on the right are the only difference between these two birds (aside from the obvious fact that they are mirror images) but the truth is that  the wings and tail feathers are similar but completely different. 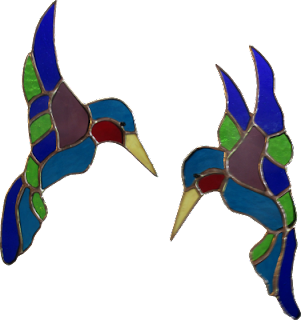 Next up we look at the Dragonfly Suncatcher that Annette made in one class.   I'll bet you can't even tell where the break occurred in this while she was grinding it.  Why?  Because she simply 'broke' the other piece on the other side the same way to even things out and make look wonderful again. 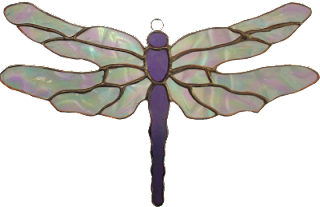 And we finish up our completed projects with another Sunflower Hoop done by Betty.  I think I definitely started a trend when I made mine out of two different yellows tones and then mixed the two colors between each Sunflower. 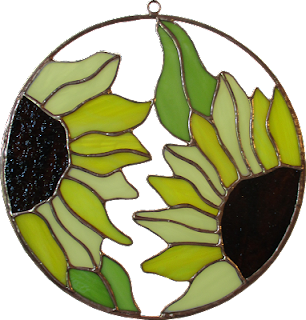 Judy M has begun work on a new window this week and got pretty far on her red, white and blue cowboy boots.  That lone star on each boot sure gives the window a Texan feel to it.   These will be much clearer to see once the brown glass has been cut but if you ask me this window already looks very apparent even if it isn't ground already.  That's because Judy is taking her time cutting her glass which will save her time later on. 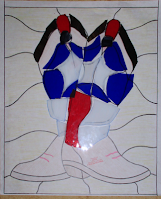 Jan's Victorian Window is all ground and ready to be wrapped.   I love the design and I love the colors that she picked for this.   Hopefully this will get a pair of borders attached to it when she comes back in since she removed a pair of something else in this design last week.  (Don't ask.) 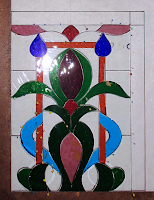 A little history here:  Ann made this window years ago and then gave it away.  Alas, it was hanging outside and forgotten about during a huge storm which caused all four pieces of the clear background glass to break.  After I showed Ann how to knock out and replace one of the pieces she took to repair work like an old pro.  In one night she got all of the broken background glass replaced which means that she'll finish soldering and washing this when she comes back in. 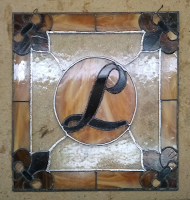 Lanterns are Lisa's newest think and this Piano Key design will boldly light someone's way once Lisa installs these four small panels which she designed herself.  Yeah, I accidentally cropped out the fourth panel when I was snapping pictures of this but the last piece is of a Treble Clef which I guess you'll see when Lisa returns.

This Cardinal is beautiful and Bee is taking no short cuts nor is she skimping on the accuracy of her work on it.  This is very close to being ready to be wrapped and tacked together already.  That's because Bee has been working on this while at home as well as when she's in class with us.  This pattern is already making some of our 'Cardinal Ladies' take notice. 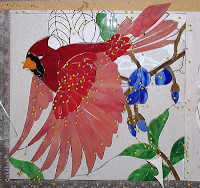 With her background all cut and ground Jeannette is ready to wrap the pieces of her Mardi Gras Fleur De Lis Window after which she'll tack everything and then work on a border.  That means that this will be all cut and tacked together by the time Jeannette leaves her next class with us because she doesn't waste any time at all. 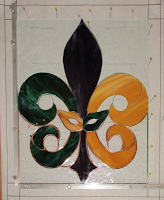 Hoops are in and Mary Grace is all in Hoops!  This butterfly that she cut, ground and tacked together this week will go into it's hoop when she comes back in.   That means that she'll be starting something new when we see her again and I think it might even be another Hoop design. 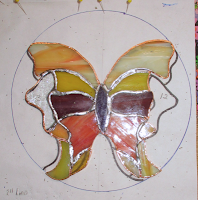 Susan D has begun foiling all of the pieces for her Winter Window now that it is all ground and fitted together.  The end is near.  Spring is about to be sprung.  It's time to put away the snow shovels and get on the lawn mowers.  I just have wonder if she'll do an Autumn or a Summer scene next.

Martha worked on her sky and clouds this week and then she moved on over to the grinder where she did excellent work on this Pelican's tricky feet.  All those yellow dots you see are pin heads and you can only place pins between pieces of glass which means that there are a lot of pieces making that pylon that this bird is standing on.  Excellent work!

There aren't very many pieces left for Melissa to wrap so she's thinking that she's going to be able to tack this together and get some background glass cut for her Pair Of Cardinals Window.  I'm anxiously awaiting that background to be put into place so we can get a good idea of what this is going to look like.  That will certainly happen upon her return. 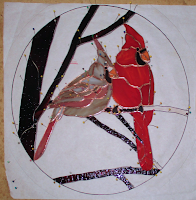 Last week MiMi finished grinding the first row of split hexagons for her newest Kitchen(!) Window and this week she got over 7 rows ground.  Once that first off-sized row gets completed things move at a faster pace for Mimi.  I just worry that traveling that fast will make her run out of juice while on that long and lonely highway to get to wherever she's going...  Say what you will about MiMi but know this: she lives dangerously. 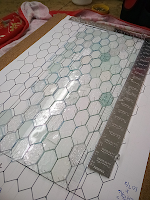 Mr. Bingle is all tacked together and he even has three yards of Strong Line running throughout him for extra support.   When Cheryl returns we will add the first of two borders and add even more Strong Line there as well.   We're going to make this large window as solid as it can be!  An a big congrats to Cheryl for coming through what she did this week.  It wasn't easy for her but she did it with a smile on her face. 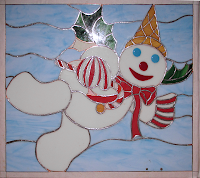 With the border attached and everything soldered Cindy's Pelican Window will be finished upon her return.  All she needs to do now is to attach some zinc channel and that won't take long at all.   After that Mr. Pelican will get a bath in some patina and then get washed and waxed.

And here's the pattern that Shawn will begin working on next week for her husband.  He wanted a scuba diver and some sea life, but NOT a dolphin.   You can find plenty of inspiration online but almost everything underwater has dolphins or other ordinary fish.  This Manta Ray was exactly what Shawn was looking for and it was easy for me to draw! 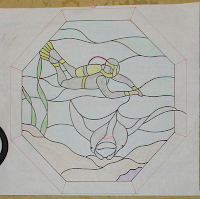 Lastly, this is going to be three dimensional Flower 'Sculpture' made in glass.  Susan R decided to make this when she saw Susan D made two larger versions.   The only difference is that this one will be made on a  more manageable scale.   The pattern on the left shows what all the leaves will look like.   Once the leaves are completely soldered Susan will tack flowers and insects on top of the leaves to give it all a 3D effect.    Everything will be mounted on a copper pipe along with other wires to support this elaborate structure.   It's going to be fun indeed! 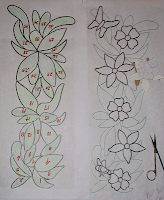 So there it is.  Everything that happened in our classes last week.  Come back and see us again!