Running Pliers.  The knob near the hinging point is called a set-screw and it was put there for a reason.   Can you break your glass without adjusting the screw correctly?  Definitely.   Can you get difficult, complex or deep curves to break (correctly) without adjusting the set-screw?  Sometimes, but most times not.  When students tell me that they've broken a piece three times and then ask me to cut it for them my solution usually begins and ends by adjusting that set screw correctly.  Students also believe that the adjustment process requires strong witchcraft.  It doesn't.  It's essentially just a flick of your wrist and it takes most people less than a second to do.  That's no joke.  I can literally adjust my pliers in less than a second.

Most times when I use a students pliers the set-screw is turned up so high that the top and bottom halves of the breaking edge of the pliers actually touch (as in the picture below).  This is bad.   Even if you don't know how to set them you shouldn't stop the set-screw from functioning altogether. 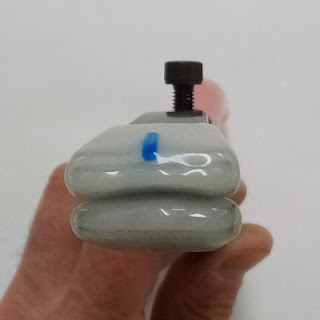 You should ALWAYS have your set-screw adjusted to prevent the pliers tips from touching.   Even it it is set incorrectly you at least have something to stop the full brunt of pressure that you transfer to your glass when you squeeze you pliers. 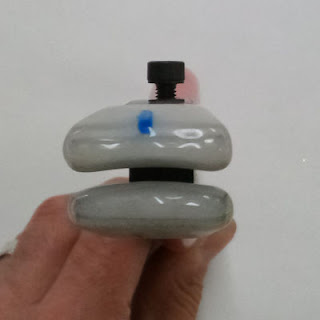 This screw is very much like the seat belts in your car.  Can you drive without your seat belt on?  Sure.  Are you safe without your seat belt on?  Most times yes, but when you need that seat belt aren't you glad you had it on?  Also, it takes longer to put on your seat belt than it does to set your pliers.  Now I've been writing up instructions on how to adjust the set-screw correctly and although it's simple enough, writing down the step by step instructions gets somewhat convoluted because of all the  detailed wording needed to explain a simple movement.  Next week I should have it whittled down to a less verbose set of instructions.  It's honestly just three minuscule twists of your thumb and pointer finger.  Word of warning- If you are a student of ours you will be practicing set-screw setting this week with me. Be prepared!

So then, Lara's Flower Pot Window is finished and it's definitely going to be turning heads.   The level of detail that she achieved on this window goes above and beyond what she's accomplished in the past and her soldering was a work of art itself.  A stunning gift indeed. 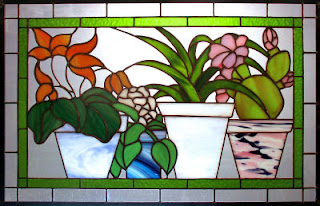 Shelley's Flamingo Window looks incredible and the glass that she used behind the bird is perfection.  Sadly, this glass is no longer available because it is no longer being made anymore.   Only the best glass gets discontinued, but at least Shelley used it for all of its potential in this gorgeous window. 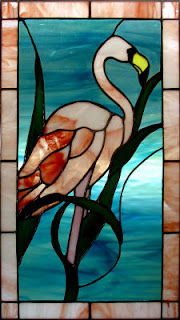 Jan finished her small Pelican window which is no larger than a standard sheet of paper.   Because of the small size she was able to forgo a border since it was light enough to hang from circular hooks that we attached on the corners of the brass channel that surrounds it.   Jan also used a small piece of wire to seperate the beak rather than cutting it in half since the beak was so narrow.   Had she cut it in half most of the glass would just cover in foil which wouldn't look nearly as good as this solution does. 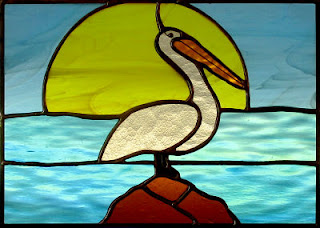 Judy completed her large Angel Suncatcher,which turned out looking just as good as I told her it would.  I can't say that that's a big surprise-- we never have bad looking projects!  I have a sneaking suspicion that we'll be seeing this made again before Christmas by many other students. 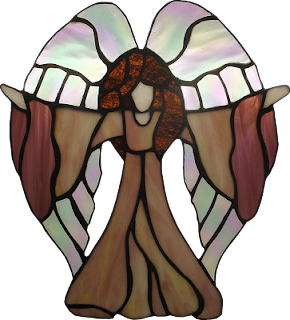 Susan R completed her first Garden Gnome Bee Man and has it attached to a stake so she can put it into the ground or into a flower pot.  This one turned out so nice that she's started work on a second one as well. 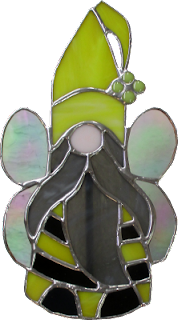 Mary Grace finished off one of the Hoop Projects that she was working on and as you can see it's the Double Sunflower Hoop design.  This is the pattern that started the Hoop craze that Mary Grace herself started and it's easy to see why it's taken off as it has. 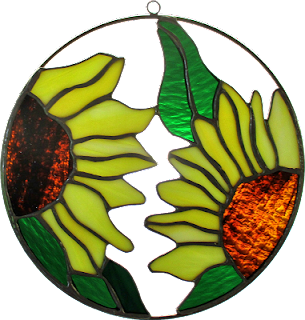 That brings us to Betty who put the finishing touches on five more Cross Suncatchers this week after she soldered each of them.  Last week they were all ground and mostly wrapped and here you see them completed just one week later.   She moves quickly on these. 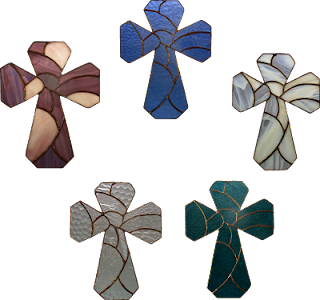 Cindy's final Bicycle Wheel Spinner is finished and ready to be staked into her yard.  This one, as you can see, was done in Mardi Gras Colors and the wheel itself even sparkles.  All of that shiny chrome makes this wheel look as though it came off of a brand new bike. 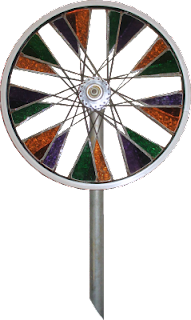 Mary began work on what she's calling her Dueling Hummingbirds.   This will be an intricate Suncatcher but the end result will be very much worth it.  Wait until you see this lit up-- her glass choices are spectacular when you see them with light behind them. 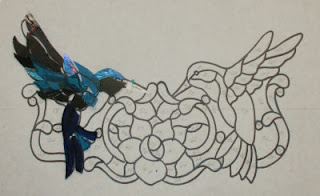 Cheryl started work on this Circular Cross while at home and finished grinding it while in class.   She's well into the wrapping part of this project so she should be soldering this when we next see it. 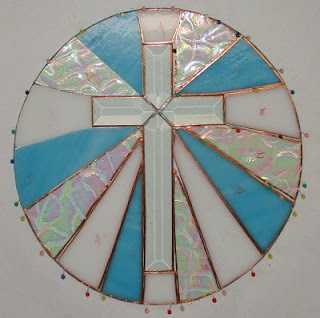 Rowena walked into class with a pattern in her hand and just three hours later she left with this cute little Santa Panel all cut out and ground.    I think she could make one of these start to finish on Christmas Eve if she had to!  Rowena doesn't rush, she just moves quickly and efficiently. 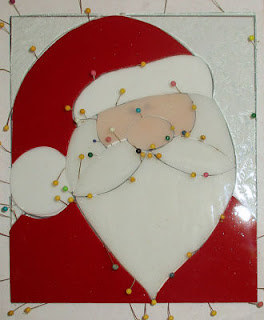 Bee's got her Dove all tacked together and then worked on cutting out her background pieces.   Each of those pieces have a grain pattern that radiates outwards starting from the center behind the dove and traveling out towards the edges.   She's also going to add blood drops to this but those will be cut into place AFTER the background has been ground.  Oh, and the Dove's beak will be added by attaching a piece of wire once this is all soldered. 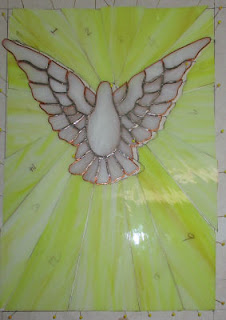 Melissa's now got all of the glass cut out for her Butterfly and Iris Window and even moved on over to the grinder before her night was over with.  She was a little concerned about the color of the black trim on the edge of the butterfly wings but I think it's perfect. 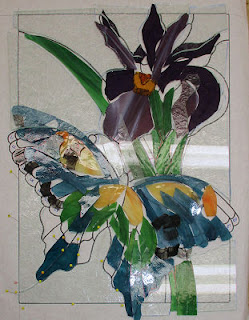 Sheri has her first border tacked into place and did she ever luck out (as well as I).   I had actually read the ruler wrong while drawing the pattern but because I 'screwed up' we were able to use an inner beveled border!  Talk about a fortuitous mistake, huh?  Sheri also got her second border cut out and ground so it's ready to be wrapped.   She'll easily begin soldering this upon her return next week. 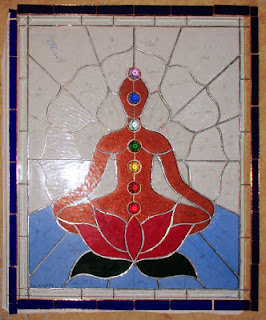 Speaking of inner borders, Linda L managed to get the first of two borders attached to her Plate Flower Window.  Once that was done she worked on the second, wider border which she only needs to grind, wrap and attach before she can begin soldering this window that a lot of other students are talking about in class. 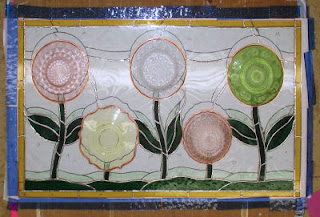 Kate finished wrapping her window and even added eyes and a more distinct head to her dragonfly.  Her attention to detail is so exact that she's going to re-cut the missing blue piece of water because the original piece didn't lined up with it's adjoining pieces correctly.  Sometimes, no matter how careful you are, things just fall off kilter a bit.  I'm glad that she's changing it because it would always bother her every time she looked at this window if she didn't. 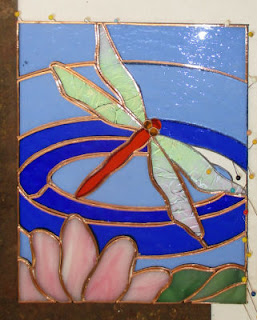 This is the second Hoop Pattern that Mary Grace was working on this week and as you might suspect we will surely see this among our completed projects next week.  There's just the back side left to go on this and then MG will begin something new. 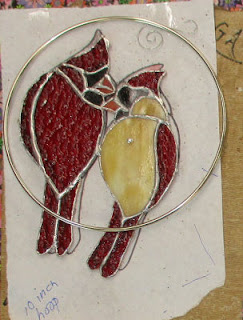 Kerry  only needs to touch up the soldering on his Butterfly Window and that means that we'll see this hanging up next week for sure! 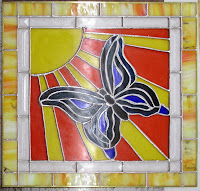 Cindy also managed to work on her Wedding Invitation Box and all she needs to do now is wash and color these two pieces and then she'll solder the hinge to the box bottom to completed this. 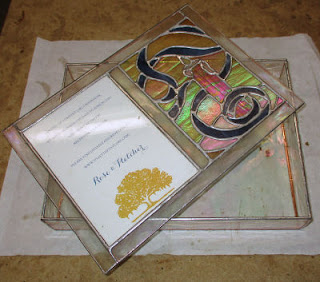 Martha, like Cindy above, is at the exact same place with her own Wedding Box.  All she needs is to wash and color both the top and bottom pieces and then she'll just solder the two together for a completed box upon her return. 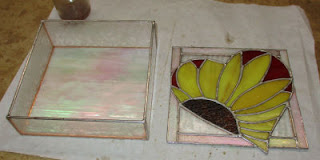 MiMi's well under way one her latest Cabinet Insert.  She's got plenty of hexagons in all the assorted glass she's been using in the previous windows and that means that she's back on track. 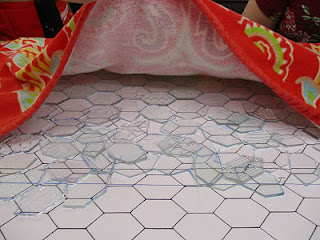 Next we look at Susan R's second Garden Gnome Bee Man (I'm not quite sure what to call him, actually).   She's already well underway with this one so I don't think she'll be working on it much longer before he's another project in her stained glass bonnet. 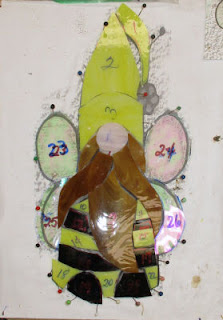 And lastly Susan D actually forgot to bring her glass with her so she decided to head back home and work there.   Four hours later she sent this picture of her Spring Panel that she continued grinding on at home.  She might not have been with us in person, but she was figuratively working right along side of us throughout our class. 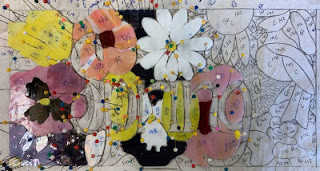 And that's all I have to say about our classes this week.  See you next Monday.