I'd like to remind all of our students that the shop will be closed for the next 2 weeks so please don't show up for classes!  I'm running late with this post but since no one from Tuesday morning showed up I think it's safe to assume that everyone knew not to come in today.

Okay then let's start things off with Kerry's Butterfly in the Sun Window which is so bright and colorful that I actually had to tone it down for the picture below.  Changing the sun from red to yellow was what this window needed as it changed to look of the window altogether from being dark to becoming bright.  I won't even mention the perfect yellow/orange combination that Kerry used for the final border because it truly speaks for itself. 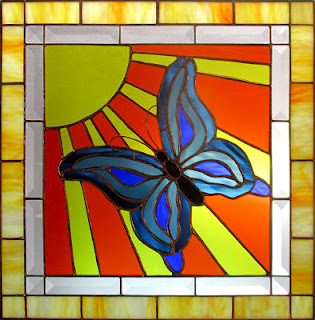 Kate completed her Dragonfly Window and as much as I want to tell you that we'll see more great things from her I just can't do that.   Due to personal reasons she has to drop out of class and she's just not sure how long it will be until she's able to come back.   That's a shame because she shows great talent.   We hope to see her again soon and wish her our best. 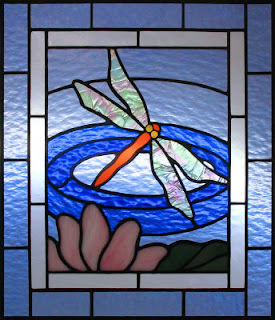 I believe that this is the first Wedding Box that Cindy has ever made and although I might possibly be wrong about that I can say without a doubt that it's certainly the first box that she's made that she designed herself.  There's a lot of amber iridised glass in this and when the light hits it this box REALLY sparkles.  You can easily tell that although this may be Cindy's first Wedding Box this is not her first stained glass rodeo.  Her work is just too good to possibly believe that! 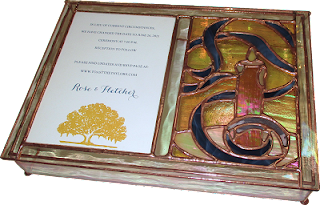 We have 3 boxes to look at this week-- the first (above) was done by Cindy and the next two by Martha. The actual invitation that Martha used in this had a scalloped edge so to square it off a solid piece of off-white iridised glass was used to back the invitation so there wouldn't be little crescent openings all around the invitation.   All in all this is a very beautiful box don't you think? 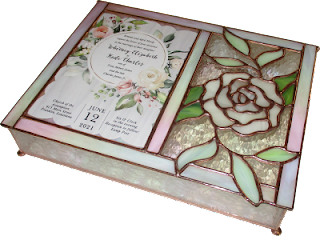 Martha didn't have an invitation for her second Wedding Box so she just presented the newlyweds with a box featuring our ever popular Sunflower heart design.   She just set the heart off at a tasteful angle and then squared it off while leaving the point of the heart overhanging to form a 'lift' of sorts.  Stunning and thoughtful, I know that this is going to make the bride and groom very happy. 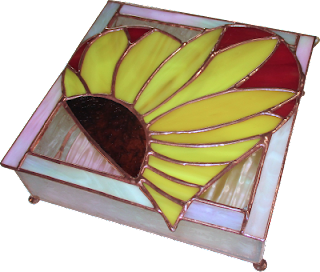 Mary Grace got her Cardinals in a Hoop completed and it features a wonderfully elegant hanger soldered onto the top of the hoop which not only supports these beautiful birds in a tasteful manor but which also suspends a beautiful jewel to accent the piece as well. 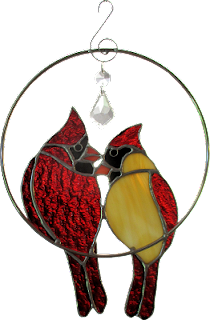 And then there's Linda F who completed a Hoop of her own while in class.   I'm unsure as to what this flower is (I'm botanistically challenged) but the lavender glasses that Linda used mixed with the almost lime green leaves really make this piece sing no matter what kind of flower it is! 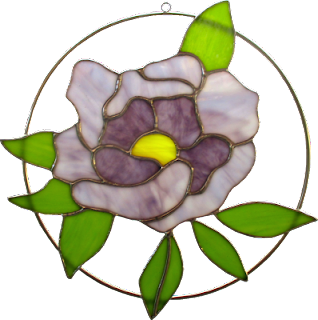 Susan's second Bee/Garden Gnome is just as fun as her first one was.  And this one took far less time to make because she was comfortable with all of the cuts and the grinding.   Does that make it better than her first Bee Gnome?   Not at all-- they're both perfection! 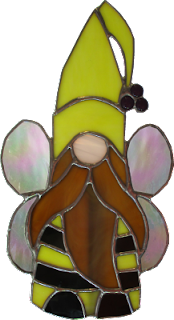 Now that all of her glass has been cut Annette has begun grinding all of the pieces for her Crow and Moon window.   The moon and some of the clouds actually extend outside of the border and some of the pieces such as the crow's feet cut into the border which makes grinding this into a window that is perfectly square a little bit of a challenge. Annette is doing great though and all that extra work will give this project a unique look which will make it stand out even more.  I'm loving this!

Shelley is well underway on her sunburst window which is a reproduction (although in a different aspect ratio) of an older window that she's trying to match.  So far everything is fitting together nicely and I don't believe that Shelley will be spending much more time working on this because her skill level is way above what it takes for this window to be completed. 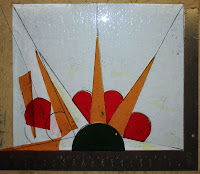 Judy M has just started work on this Buxom Pair of Wine Beauties and is moving along on it at a nice rate of speed.  Although Judy is still somewhat new at this I believe that her making this window will not only go smoothly for her but that it will also boost her self confidence when it comes to window making.    She's also going to end up with a great head turning window as well. 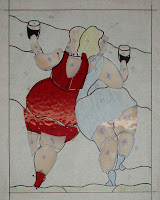 After completing his Butterfly Window Kerry also began work on our famously popular Stylized Fleur De Lis pattern.   The color choices are what make this and Kerry has decided NOT to go with a traditional series of browns and ambers.  I think that's a nice change of direction for this window because the version of this that really sticks out in my mind the most is the one made using green glass. 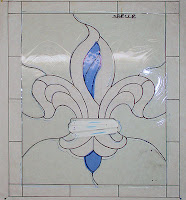 Next up we have Sheri who is so close to finishing her Chakra Yoga Window that it almost hurts.  With the front and the back soldered all she has left to do is knock out 2 pieces that accidentally got soldered in backwards, solder the gems into place, get channel attached the outside edge and then clean and color this window.  That may seem like a lot but there's a possibility that it could happen inside of just one class. We'll see what happens when Sheri comes back in 2 weeks. 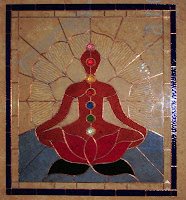 Melissa is a grinding fool and the bottom Butterfly portion of her window is coming together wonderfully.  The hardest part of this is getting the butterfly ground because after dealing with all of those tiny pieces the larger  (and fewer) pieces of the Iris at the top of the window will be very simple. 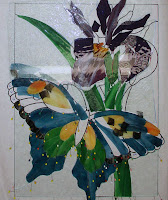 I'm pleased to say that all of the intensely small pieces don't stop you from seeing the word 'Spring' in the center of this incredible window that Susan D is making.   A lot of that has to do with her excellent color choices.  Enlarge this and marvel at the number of deep 1/8th inch cuts that run all throughout this design.   Susan is moving along on this at an impressively breakneck speed so color SPRING blue and me impressed.

Mary Grace's latest hoop design is of an American Flag in the shape of a heart and in just one class she managed to get it all cut out and halfway ground as well.  I think we'll be seeing this done again soon now that it's been posted on the blog for all of our students to see.  I'll say this:  Mary Grace knows how to start a trend! 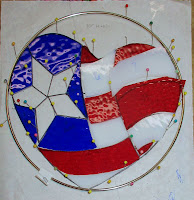 Bee's Dove Window is officially cut out and even mostly tacked together.   She only needs to tack the border and then she can begin soldering both the front and back sides of it.  Alas, I have her soldering iron so I'll need to see if we can get it back to her so she can possibly work on this at home during the next two weeks while our shop is closed.  If she can get just one side of this completed before she comes back in I have no doubt that this will be finished and prominently displayed at the top of out next post. 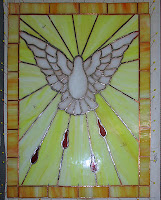 It's official- all of the glass has also been cut and ground for Tracey's Humming Bird and Morning Glories Window.   She's got the center all tacked together and she decided to go with a mixed border of bevels and textured clear glasses for the border.  I'm sure that she'll be soldering this upon her return because she only has 16 straight pieces left to wrap and I know it won't take but a  few minutes to finish wrapping those remaining pieces. 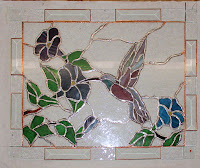 Mary's dueling Hummingbirds Suncatcher has completely taken shape now that Mary is two classes into her newest project.  It's funny how she said that she wanted to do something simple this time around and how she ended up with a very small project with over a hundred pieces in it.  Simple is not the word I'd use to describe this pair of birds-- the word 'stunning' is a much better fit..

Linda F got all of her first Ladybug Panel ground and now you can see just how cute a window it truly is.  She's decided to use green for the border (that's almost expected from Linda!) and I think the color contrast from the green leaves to the border is perfect.  I'm a big fan of subtle color shifts.  We've still yet to actually cut the border but once this is tacked together that will take less than 10 minutes to cut and grind. 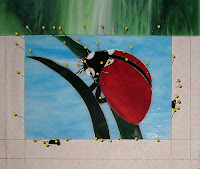 I may be wrong but I do believe that Linda L has her Flower Plate Window soldered both front and back sides. That means that she'll be able to drop her plates into position, solder them into place and then get some channel around her border to finish it all off. It may look a little empty right now but once the plates are in place this window will look like a whole other window indeed.  The end is near! 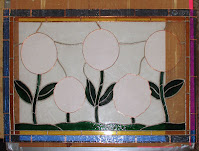 As always, MiMi is hard at work and still not losing interest in making her Hexagon Style Cabinet Inserts.   Once she finished this one she'll have all of one section in the room completed.  This week we double checked the measurements for her next set of windows and as soon as she finished this piece she'll be able to move along to the next size. 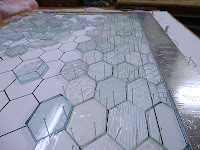 And there you have it.  This is a bit late but not nearly as late as our next post will be since we are closing shop for 2 weeks.   Hopefully the place will be much cleaner when our students arrive back to class!
Paul
Bayou Salé GlassWorks
Posted by Bayou Salé GlassWorks at 11:12 AM