Well, That Was A Break

Sometimes there's an easier, more efficient way to do things.   When I look at a pattern I plan things out before I cut out my paper pattern pieces because cutting out each piece individually is not always the best way to handle a situation.   If you are striving for accuracy you sometimes have to work somewhat backwards.

Here's a good case in point.  If I were making the pattern on the left below I wouldn't cut out all of those circular bubbles.    I'd trace out the pattern but I'd  omit the bubbles and connect the lines that run between them as you see on the right. 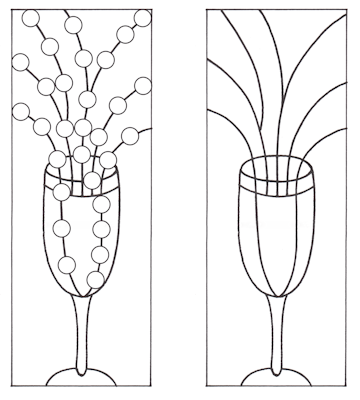 Next, cut and grind the pieces as if the bubbles aren't in the pattern as you see on the bottom left.   Then trace out your round bubbles and then cut, grind and wrap all of them.  Place them on the glass that you have already ground and carefully trace around all of them with your marker.  Cut as much of the circles as you feel safe in doing and then grind the rest of the circular openings.  Since none of the bubbles that you cut will be identical,  you'll need to be sure to place each bubble back into its original location where you traced it.  When you're finished grinding all of these half circles you'll have a background that perfectly fits your bubbles. 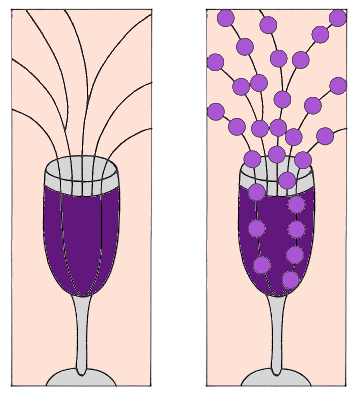 Cutting and grinding in this manor prevents you from ending up with circles that don't match along their split centers as shown below.  It's a sloppy look and anyone looking at it will instantly realize that the window was made incorrectly.  Your work is a reflection of you-- Take pride in it! 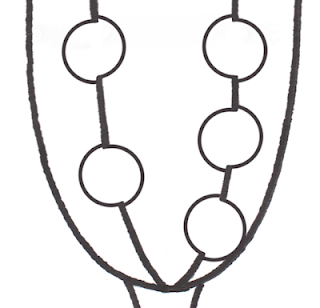 This tip also shows the importance of having the background flow around the subject matter and not vice versa.  In this case the bubbles need to be perfectly formed perfectly over the wine, and the wine glass.   Don't fit your subject (in this case the bubbles)  to the background (the wine and the glass) or you'll end up with bubbles that  distort the aesthetic of your window.
So up first we take a look at Cindy's amazing Corvette Window that she's donated to Brittany's Project which will be raffled off.   They picked the idea, we drew it up, and Cindy put in the blood, sweat, and tears.  What's Brittany's Project?  It's a future facility for individuals with disabilities to enjoy life through recreation, social events, and support.  In other words, this was made for a great cause. 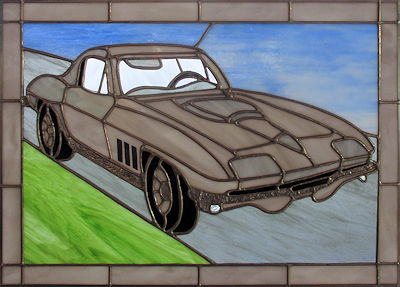 And if that wasn't enough Cindy also created this Jeep Window (also requested by Brittany's Project) that has just as much work and detail that the corvette has (if not even more)!  The fact that she made both of these windows in the span of just three and a half weeks is astounding.  I hope these two windows bring in a lot of money for this great cause! 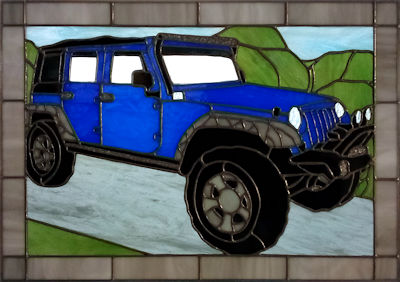 Bee's Flowerpot Window turned out bright and beautiful.  All her curves flow smoothly and all of her straight lines are true.  You can say that her straight lines are in a Bee Line!  Beautiful colors and careful cutting make this a standout window for Bee-  Largely because she added the flowerpot and the flower on the right side of the pattern both effortlessly and more importantly, seamlessly.

Just look at this cute Kitten with a Pumpkin that Susan R finished.   This went on a stake so she can mount it in her yard next year Halloween and this year for Thanksgiving if she wants.   Hey, almost everyone has pumpkin pie for Thanksgiving and cats are a year round thing so why limit the amount of time this can spend decorating a yard? 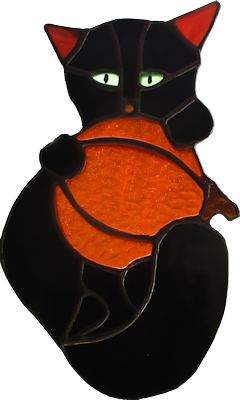 Kerry's Parrot Window was also completed and his colors are perfection even down to the highly texted clear background glass.  I always say that the subject should be the focal point and this bird certainly is but just look at the glass Kerry used for the vines and the branch.  They may be smaller items in the grand scheme of this window but they almost have a 3D look about them due to the wonderful shading of the glass that he picked. 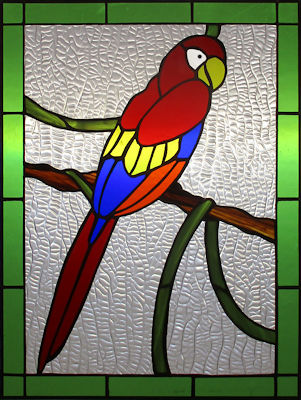 Annette's upped her game and finished two complex Angel Suncatchers this week.   I remember when she had trouble grinding her projects and now she flies right on through the cutting and grinding process.   That said, one should NEVER fly through the soldering process as there's only one speed you can solder at and that's the speed that gives you a smooth lead line.  These are gorgeous! 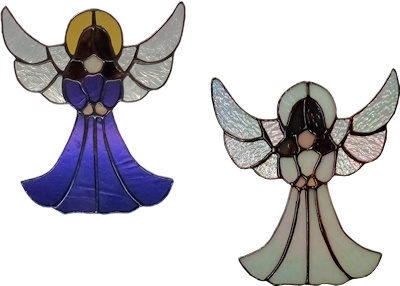 Jan took a small Santa pattern that was normally fits on a standard piece of paper and then doubled it's size to make it an actual window rather than a panel.  It's as cute as cute can be but it leads to the age old question of what's the difference between a window and a panel?  That's a great question but there's no definite answer.   Myself, I call anything that's roughly 12 inches or smaller along its longest side a panel, and anything larger to be a window.  Of course there's a lot of wiggle room in there but if you think a project is a bit on the small side just call it a panel.  What we're looking at here is Jan's festive Santa Window.  Ho Ho Ho! 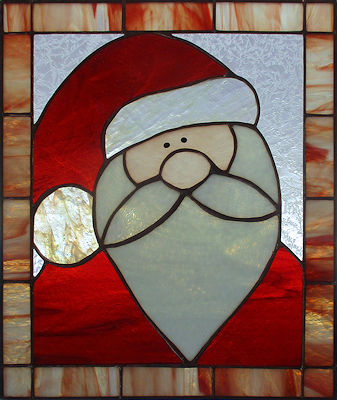 Ann came in and wanted the simplest of Christmas tree patterns as described by her grand daughter:  "Three inches tall, made out of just two pieces, with the tree being a triangle."  Well, I think that we nailed that one right on the head!   Ann made two of them within the first half hour of class (and a lot of that time was spent drawing it up) and then she moved back on over to her Christmas Ornaments. 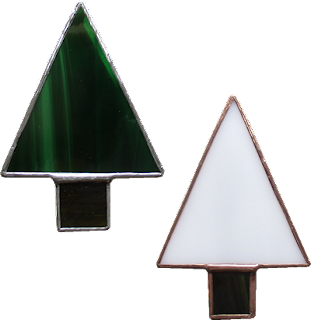 Our last finished project of the week was made by Linda L and is actually two projects.  This is her final Angel Panel and this is the one that she's keeping for herself.  Next up she has a similarly colored beveled cross suncatcher.  Both are lovely and both are superbly crafted. 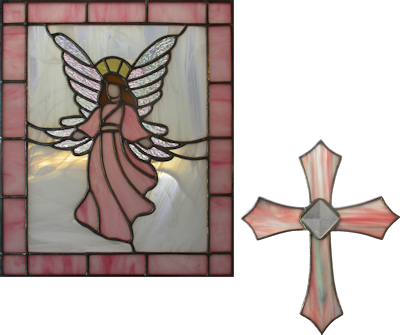 Lara's started a very peaceful and colorful sunset scene and over the weeks to come you'll see how mixing colors can enhance a window.   Take for example her palm tree leaves.  Rather than using one green for all of the leaves she's mixed 4 or 5 different greens and even in this starting phase of her window, it looks incredible!

Sheri fell in love with my Sugar Skull and has begun one of her own.  She's making it one section at a time and has the right eye completely cut and ground.  Before she moves away from the eye's she'll  wrap all of those pieces and then tack them together.  This way, instead of have an eye consisting of 25 tiny 1/4 inch pieces that can slide all over she'll be dealing with one large eye on either side of his 'face'.  This will make grinding the pieces that surround it so much easier.

We haven't seen this one done in a while but Annette saw the pattern and fell in love with it.  There will also be some red holly berries cut into the green holly leaves but that, as we know, will be cut AFTER this has all been ground.  So far she thinks this is a joy to make! 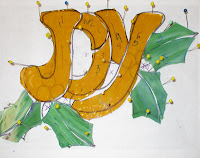 Santa's are officially in season and Linda L is making 3 wonderful oversized suncatchers that hang against the edge of a window.  When one (or more) of these are finished I'll show you exactly how that looks.  Linda texted me a picture and she has one Santa completely ground now and it already looks great. 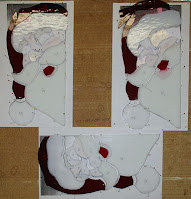 With all of the pieces cut and ground for her 8th window MiMi is ready to begin wrapping this one.  She says that these smaller doors are going considerably faster than the larger ones and that's got to make MiMi feel good knowing that the end is getting closer and closer  and faster and faster.

Lisa's on a Nightlight roll and managed to cut out and grind two baseballs and two 2 soccer balls as well as cut out and begin to grind three deer heads.  That's a lot of work especially when you consider the size of these pieces.  Lisa's no slouch when it comes to tackling projects quickly and efficiently.

This week it's VERY easy to see the 'Est. 1965' letters and numbers that make up the panel that Susan D is working on.   Since this is a small piece things will tend to go slower than normal since she'll be using the 1/4 grinder head extensively to maintain all the details of the text.  I know that Susan's up to the task though. 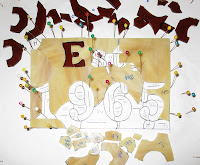 Mary Grace has two of the three blues all cut out for her long Peacock Window.   I have to say that although bevels are nice, cutting this peacock out of colored glass has changed what would have been an elegant window into a colorfully elegant window!  I already love the color choices and it's nowhere near completed yet.

Martha's back and she's building her life by working through some text of her own.  Even large text can be a pain in the butt and Martha will attest to that.  But she's got her big girl pants on and she stormed through a lot of text and text background this week.   I think she'll easily be wrapping this when she comes back in. 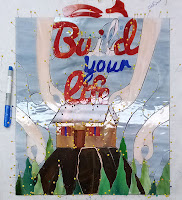 These Ornament Patterns have really proven popular and Shawn has three more of them almost completely wrapped and ready for solder.  The funny thing is that people think these are 'easy' but they really do involve some intense grinding so they're not as easy as one would first believe.  But no one complains and the work gets done as proven here by Shawn's three latest Ornaments.

Here's a look at the five Christmas Ornaments that Ann is working on.  As you can see she's begun grinding these and has one ready to be wrapped.   Once you do enough work on these it's easy to end up in the Ornament Zone, so to speak, and have things just zip along.  You can correctly deduce that Ann is definitely in the zone here.

Tracey actually has two or three more Christmas Ornaments ground but she bagged them up before I got a picture of them.    To be honest I'm not sure of this is one of them but they were from this basic set.   We'll most likely see them completed upon her return.

To wrap this all up we take a look at one of the pieces that Barbara is repairing in her large beveled window.  Now that the last larger piece has been  been knocked out she'll be able to work on the smaller outer border sections.   Sadly, repairing windows is part of the stained glass learning experience.  Let's just not have to do it too often. 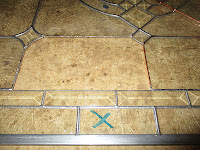 And there you have it!
Paul
Bayou Salé GlassWorks